The pink, crescent-shaped scar still cuts through the dove’s wings tattooed on his left arm, a physical reminder of a moment he’d rather forget.

Jose Alvarado did what he has always done on a basketball court: go all-out, throw his body around, play fearlessly.  So when he saw Duke forward Javin DeLaurier have an unimpeded path toward the basket on the opposite baseline, Alvarado wasn’t about to bail out.  He threw himself toward DeLaurier like a soldier jumping on a grenade, doing whatever he could to challenge the shot of a player 10 inches taller than him.

DeLaurier scored, but the midair collision caused Alvarado’s body to splay awkwardly.  He crashed to the Cremins Court, elbow-first.

The next sight was ugly and unmistakable.  Alvarado had fractured his left elbow, a gruesome injury that turned McCamish Pavilion ghostly quiet.  It cost Alvarado the rest of his freshman season.  It took him four months before he could start shooting again.

The scar has mostly faded, though, and so has the memory from that Feb. 11, 2018 day for Tech’s sophomore point guard.  For the first time since that injury, Alvarado will face the No. 2 Duke Blue Devils (16-2, 5-1 ACC) when the Yellow Jackets travel to Cameron Indoor Stadium.

Speaking before Georgia Tech (11-8, 3-3 ACC) practiced Friday, Alvarado’s sole focus was on the game ahead.  The injury, in fact, never came up.

“I’m excited.  I can’t wait for the game, but it’s just a regular game for me coming up.  I’m just going to play as hard as I can,” he said.

Still, nothing erases a bad moment quite like a seminal one.  Fresh off a 63-61 win over Notre Dame, Alvarado and the Yellow Jackets will seek their first win at Duke since 2004.  As you get ready for tip-off, here are the top five notes from my chart in preparation for Saturday’s matchup in Durham (12 p.m. ET, Georgia Tech IMG Sports Network):

The whispers started in the offseason.

Is this the best collection of freshmen ever assembled?  Could Duke run the table? Will they have players go 1-2-3 in the NBA Draft?

With the regular season more than halfway over, Duke has done little to lessen the hype.  The 6-foot-7, 285-pound Zion Williamson (21.7 ppg, 9.3 rpg), is a sui generis physical specimen who makes a mockery of gravity and can overpower defenders on “grab and go” moves.  Six-foot-7 R.J. Barrett (23.9 ppg, 6.7 rpg) is an athletic, long-striding lefty who changes speeds and gets downhill quickly.  Six-foot-9 Cam Reddish (13.1 ppg) is a light-on-his-feet wing who can score at all three levels.

Duke’s collection of freshmen is scary – and that doesn’t include point guard Tre Jones (8.1 ppg, 5.7 apg), who missed the last two games with a shoulder injury.  Perhaps it’s instructive to look at Duke’s lone loss in conference play, a 95-91 overtime defeat to Syracuse on Jan. 14.  Two days after the Yellow Jackets torched them for 59.5-percent field goal shooting, the Orange’s 2-3 zone caused Duke to become unusually sedentary.  The Blue Devils played most of that game without Jones, but as Jay Bilas remarked on the broadcast, there was a lot of passing, just not a lot of moving by Duke.

Georgia Tech forced Notre Dame to play above the foul line in its win Tuesday.  Can the Yellow Jackets shrink the floor, make the Blue Devils become passers, and force them into settling for threes, where they’ve been spotty this year (only 28.7-percent 3pt. in ACC play)?  After allowing 20 offensive rebounds against Notre Dame, the Jackets may also need to have their best defensive rebounding game of the season.  On top of its other offensive gifts, Duke ranks third in the nation in offensive rebounding percentage (38.3 percent). 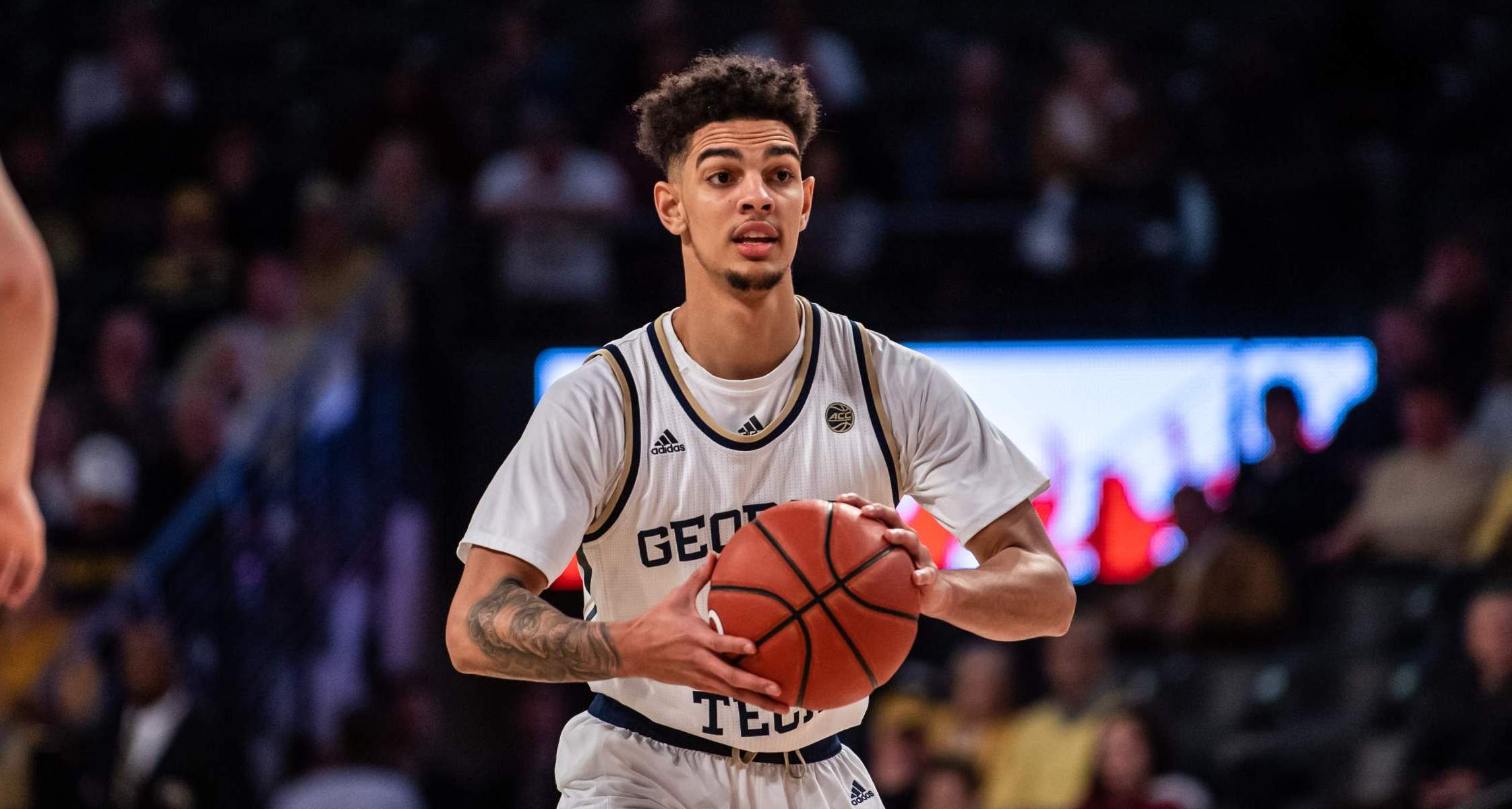 Tech freshman Michael Devoe (above) will reunite Saturday with Barrett, his backcourt mate at Montverde Academy in Florida.  The two teamed up to win a high school national championship in 2018.  Devoe told me he considered Barrett his closest friend there.

Barrett, by the way, isn’t the first member of his family to square off against Tech.  His Dad, Rowan, was a freshman at St. John’s when the Redmen fell to the Yellow Jackets 71-69 in the championship game of the ECAC Holiday Classic Dec. 29, 1993 at Madison Square Garden.

In their 79-64 win over Pittsburgh Tuesday, the Blue Devils played mostly zone, a tactic owing mostly to the absence of Jones.  Head coach Mike Krzyzewski announced on Friday that Jones is probable for Saturday’s game; if he plays, expect him to extend on Devoe and Alvarado for all 94 feet.  If Duke rolls out its zone again, can Tech move the ball to the second and third side?  Can their bigs play with poise when they catch down low?  Avoiding turnovers is a must – nobody converts takeaways into lethal fast breaks like the Blue Devils (Duke ranks third in the nation in steals).  The Jackets will also need to do a good job making the Blue Devils “see bodies” in transition.

Duke ranks third nationally in offensive efficiency.  Georgia Tech has faced four teams that currently rank in the top 32 in that category.  Take a look at how they’ve fared against the Jackets:

It may mean nothing on Saturday.  But Georgia Tech has shown it has the tools to make life uncomfortable for high-powered offenses.

Khalid Moore only attempted three shots against Notre Dame, but they were arguably three of the biggest of the night.  His first, a three-pointer, gave Tech a 46-42 and prompted an Irish timeout.  Minutes later, a fall-away jumper as the shot clock expired pushed Tech’s lead to six.  His breakaway layup stretched Tech’s lead to 11 with 5:08 to play.

Moore missed the ensuing and-one, though, which continues a curious case of cold free throw shooting for the Briarwood, N.Y., freshman.  Moore has now gone 2-for-his-last-9 from the foul line.  Prior to that he had made 14 straight, the longest streak on the Jackets this year.  His versatility and nimbleness in Tech’s matchup zone could be critical against the Blue Devils.

“He was not going to be scared to go play in Cameron Indoor at Duke.  He was not going to be scared to play in Chapel Hill at the Smith Center.  I knew he was the type of guy that when we lined up for the national anthem… I know he looks across the court and he sees all those five-star, McDonald’s All-Americans and all those elite guys, and he’s not scared one bit, and he’s not scared to go for the jugular vein in a sense.”

–Josh Pastner, from last year, on his recruiting evaluation of Jose Alvarado.  He’ll finally get his chance at Cameron Indoor – and against all those “five-star, McDonald’s Americans” too.

Now that we’re prepared, we hope you are as well.  Join us for pregame coverage starting at 11:30 a.m. ET on the Georgia Tech IMG Sports Network.  See you in Durham.