He may not have the ridiculous range (or accompanying green light) of his counterpart a mile up the road from McCamish Pavilion, but Curtis Haywood II has started to re-emerge as one of Georgia Tech’s top outside shooting threats.

He proved it once again Saturday in the Yellow Jackets’ 73-59 win over Syracuse.  Making his first start since December 17, Haywood scored an ACC career-high 15 points, including a pair of three-pointers during a decisive 22-5 second-half run.  Each basket was punctuated by Haywood’s signature celebration, windmilling his arm while holding out three fingers.  He also added a career-high 7 assists.

“He’s a guy that’s got great length.  He’s got good instincts defensively.  He can get in the passing lane and create some steals.  I think he’s one of our better assist-to-turnover guys on our team,” Pastner said on our weekly radio show.

That versatility could come in handy Wednesday as Georgia Tech (10-6, 2-1 ACC) takes on Clemson (10-6, 0-3 ACC) at Littlejohn Coliseum.  Haywood played six mild minutes in Georgia Tech’s game versus Clemson at McCamish last year; a day later, he was shut down for the season due to a stress fracture in his shin.  He’ll look to make his impact Wednesday against a Clemson team that’s as dangerous as its record is deceptive.

Oh, and as for he and his fellow Okie-turned-Atlantan, Haywood said his high school team (Mustang) squared off with Trae Young’s high school (Norman North) every year.  Haywood’s team won their final meeting, with Haywood contributing 26 points.  Young topped him with 29, though he may have been burned out that night.

He scored 60 in his previous game.

On Jan. 28 in Atlanta, Clemson buried 10 of 21 three-pointers to survive 72-70.  A month later, the Tigers rallied from an 11-point second-half deficit to win 75-67, a game that turned on a costly fourth foul by Josh Okogie.

The Tigers reached the NCAA Sweet Sixteen last year.  Tech pushed them to the brink in both, only to come away exasperatingly empty-handed.

After getting strangled by Virginia 63-43, expect a hungry, angry Clemson team at Littlejohn Coliseum.  Several key pieces from that NCAA Tournament team remain, including senior guard Marcquise Reed (18.9 ppg, 3.7 apg).  The Tigers like to put Reed into a variety of screening action to free him up for shots, often to his left.  Fellow guard Shelton Mitchell (12.6 ppg) has struggled in ACC play but has a knack for knocking down crafty, midrange pull-ups.

In spite of its 0-3 start, Clemson has the second-most returning points in the ACC behind Virginia Tech.  Can the Yellow Jackets continue their straitjacketing defense and prevent the Tigers from grasping onto some confidence early?  Clemson has only made 25.9 percent of its threes in ACC play, but drained 19 of 39 against Tech last year (Reed and Mitchell both have deep range from the slots).  Fighting through screens, especially in on-ball action involving Reed, could be key. 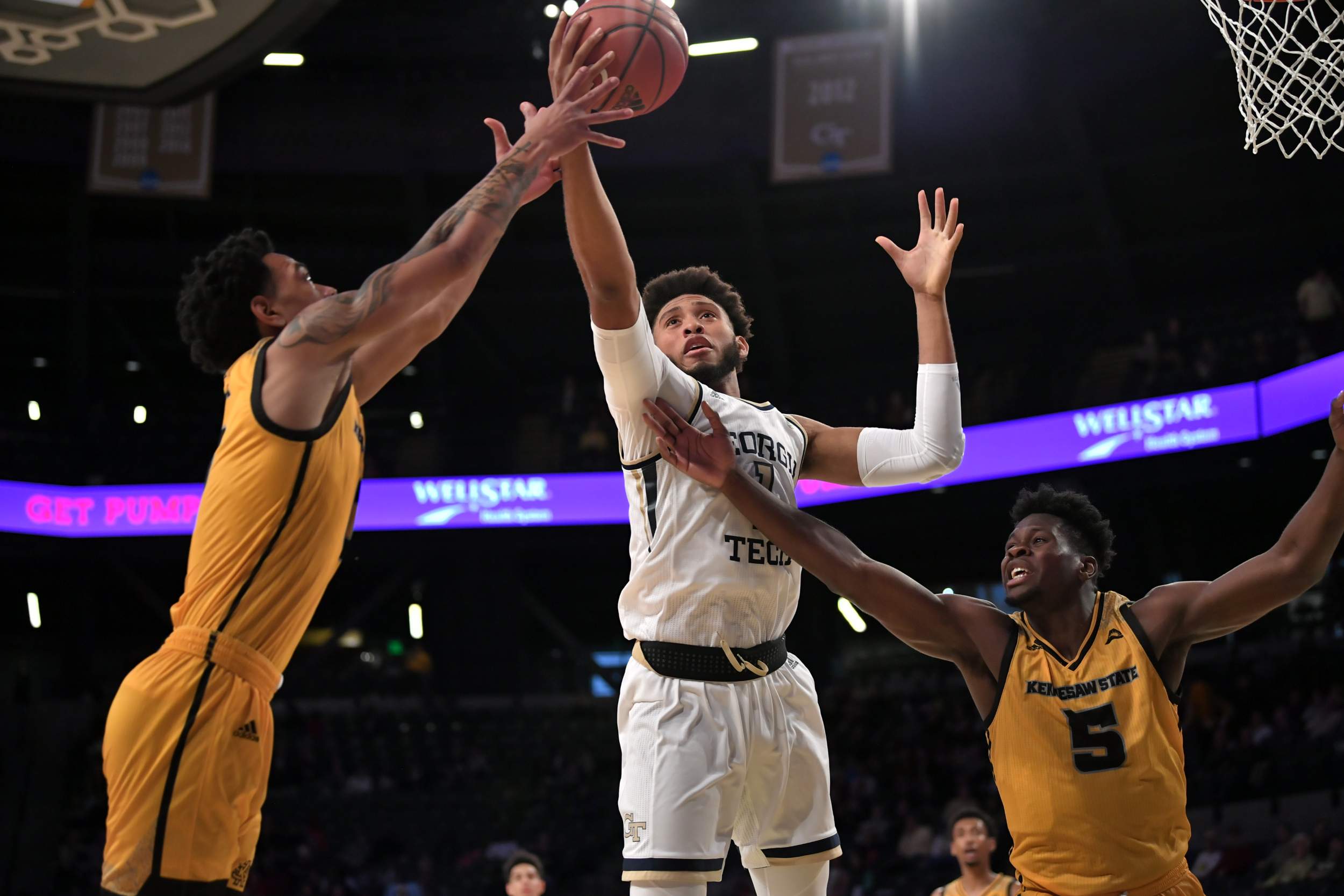 Since the Kennesaw State game, when Georgia Tech made a concerted effort to seek shots earlier in possessions, the Yellow Jackets are shooting 55.3 percent.  They’ve also assisted on 73 percent of their made field goals during.

Those numbers have offset a rash of turnovers of late – Georgia Tech has committed 40 over the last two games, leading to a minus-16 differential in points off turnovers.  Clemson thrives on shooting gaps and getting open-floor steals, and 6-8 senior David Skara (8.6 ppg) is an especially dogged defender.

James Banks III has a new choice of footwear when strolling in to the Zelnak Practice Facility.  In recent weeks, the 6-9, 243-pound center has taken to wearing a pair of size 18, camouflage Crocs.

There’s been no disguising his production away from home.  In five games outside of McCamish, Banks is shooting 71.9 percent from the field (23 of 32).  Three of his four double-doubles have come away from home.

Wednesday’s game could feature something I’ve ever seen before: as many as eight Division I transfers sharing the floor at the same time.  Clemson can theoretically throw out an all-transfer starting five in Reed (Robert Morris), Mitchell (Vanderbilt), Thomas (Texas A&M), Skara (Valparaiso), and center Javan Reed (Oral Roberts).  Georgia Tech can counter with Banks (Texas), Brandon Alston (Lehigh) and Shembari Phillips (Tennessee).

Which team shot the highest percentage from three versus the Pirates this year?  You guessed it – Georgia Tech (9 of 17, 52.9 percent).

Now that we’re prepared, we hope you are as well.  Join us for pregame coverage starting at 8:30 p.m. ET on the Georgia Tech IMG Sports Network.  See you at Clemson.