Stuck in a perpetual state of holding its breath, enduring the will-we-or-won’t-we whiplash of a schedule under constant threat of interruption due to COVID, Georgia Tech finally gets a test of something other than its patience.

After two weeks, four postponements, and countless flare-ups of frustration, the Yellow Jackets get a long-awaited chance to re-start their four-game win streak Wednesday when they host No. 20 Clemson (9-2, 3-2 ACC) at McCamish Pavilion.  Georgia Tech (6-3, 2-1 ACC) will need to regain its edge quickly: despite a lopsided loss to Virginia over the weekend, Clemson has arguably been the surprise of the ACC, climbing to as high as 12th in the national rankings.

The Jackets swept the Tigers for the first time since 2005 last year, though head coach Josh Pastner described those games as “backyard, old-school brawls.”  He knows the challenge that awaits his team after a 17-day layoff.  He knows the risk of rust coming out of a long break.

He also knows the surest way to overcome that.

“As I’ve told our guys, there could be a little bit off-rhythm – a pass here, a pass there – but there is no chance to be off-rhythm of [being able to] compete.  You’ve got to play so darn hard every possession,” Pastner said. 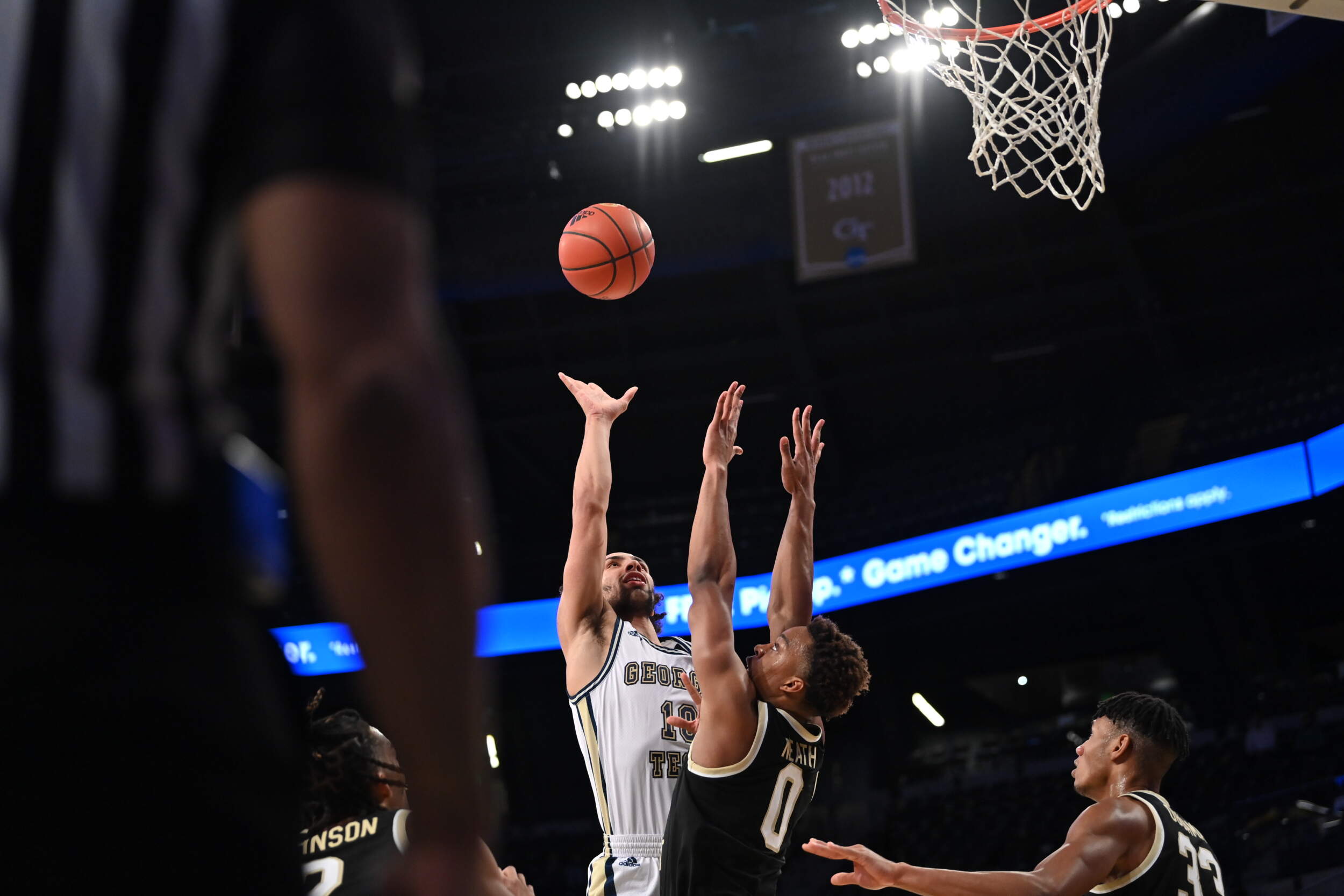 Jose Alvarado ranks No. 2 in the ACC in scoring, the shortest player among the conference’s top 10. (photo by Danny Karnik)

Clemson allowed Virginia to shoot 60.6 percent from the field Saturday, but don’t let that obfuscate how good the Tigers have been defensively.

Heading into the game, Clemson led the nation in defensive efficiency, allowing just 0.86 points per possession.  Even after that 85-50 loss, they still enter McCamish Pavilion ranked eighth.  So what makes the Tigers so treacherous defensively?  They’re one of the better teams in the ACC at “digging,” where a strong-side help defender sticks his foot into the driving lane before recovering on his man.  The Tigers’ dedication to digging often leads to charges, clogged paints and turnovers (Clemson ranks eighth nationally in turnover percentage, forcing a turnover on 25.3% of possessions).

The Tigers also like to “ice” ball screens, which forces action toward the baseline.  They have a pair of pesky, opportunistic guards in Al-Amir Dawes and Nick Honor, as well as mobile bigs who can cover lots of ground in the halfcourt.  They’ve also utilized their depth to pick up teams more in full court.

Before their break, Pastner had talked to his team often about the speed of its cuts.  Simplistic as it sounds, the Yellow Jackets will need to cut hard to force help, which can open the floor for clean looks and attacks off closeouts.  Tech did a solid job of that in its sweep last year: the Jackets shot a combined 41.9 percent from three (13 of 31).

Their team’s name?  The Tigers.

“His Dad is a legend,” Devoe told me (Al Honor is a decorated high school girls’ basketball coach in Orlando).

Devoe will look to build off some strong recent outings against the Tigers – the junior dished out a career-high eight assists at McCamish last season, then scored the game-winning floater with 15 seconds left in the rematch at Littlejohn.  He and Jose Alvarado have combined to average 56.3 percent from the field in ACC play this season.

Jose Alvarado ranks sixth in the ACC in field goal percentage (.528) as a 6-foot point guard.  Check out the heights of the other players in the top 10 in the ACC in shooting percentage:

High shooting percentages are usually the domain of big men.  The senior has crashed the party in an impressive way this season. 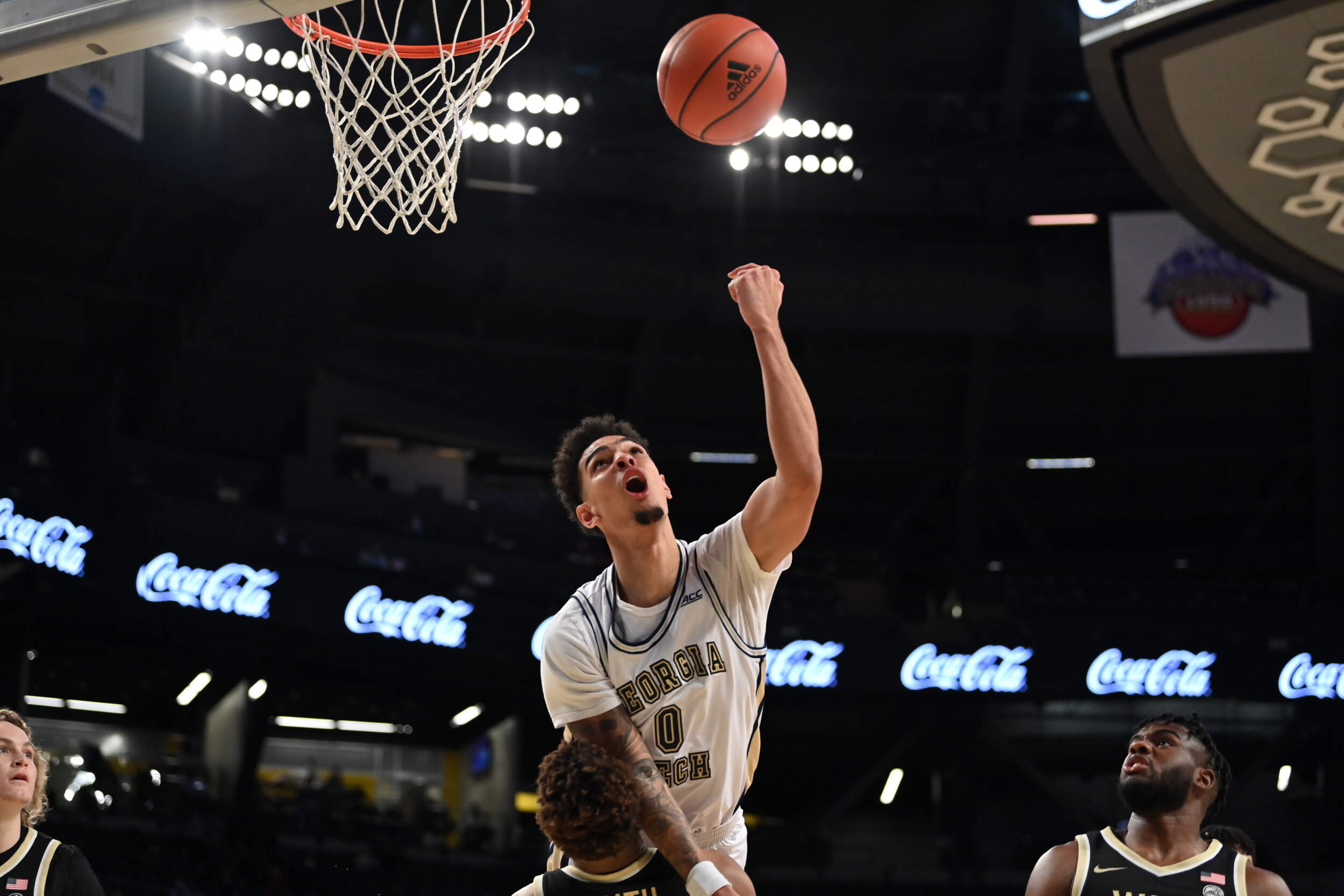 The Tigers have a balanced offense, but the fulcrum of it remains Aamir Simms (team-high 11.6 ppg, 5.7 rpg), a preseason first-team All-ACC forward.  The 6-8, 245-pound senior scored 23 of Clemson’s first 38 points at McCamish last season, scoring on a variety of slips, pick-and-pops, post-ups, and rim runs.  His three-point shooting has dropped this year, 29 percent, down from 40 percent as a junior – but he remains a credible threat from deep.  Along with 6-7 Hunter Tyson and 6-5 John Newman III, the Tigers like to use their forwards in “ghost screen” action, where they feign setting a pick before slipping hard to the rim.

Clemson generates much of its spacing off the mismatches Simms creates (he’s also one of the most gifted passing big men in the ACC).  Don’t put too much stock into his 4-of-20 shooting over the past two games – he’s a tough cover who can change the axis of a halfcourt.  Simms often creates matchup problems for teams that play a conventional center.  Can Tech’s medley of smaller “5” men (Moses Wright, Khalid Moore, Jordan Usher) take away some of that advantage?

Other keys for Tech defensively: be sharp when Clemson tries to drive from the slots, defend well off the ball, and play strong transition defense.  Can they also keep the set-heavy Tigers off balance with their multiple, switching defenses?

When he chose Georgia Tech as his transfer destination, guard Kyle Sturdivant cited a desire to be closer to his family.  Still, a cross-country connection between him and Josh Pastner didn’t hurt Tech’s chances either.  Sturdivant’s godfather is Damon Stoudamire, the former University of Arizona guard and 15-year NBA veteran who served as an assistant under Pastner at Memphis.  Sturdivant said he spent part of his quarantine studying highlights of his godfather on YouTube.

Now that we’re prepared, we hope you are as well.  Join us for pregame coverage starting at 6:30 p.m. ET on the Georgia Tech Sports Network from Learfield IMG College.  See you (back) at McCamish.