Inside The Chart – ACC Championship Game

A week-and-a-half ago they simply wanted to get off the bubble.

Now they have a chance to cut down the nets.

An ACC Tournament that began with a double bye – and continued with an unexpected bye in the semifinals – concludes tonight at Greensboro Coliseum when Georgia Tech (16-8, 11-6 ACC) plays for its first tournament title since 1993 against 2-seed Florida State (16-5, 11-4 ACC).

Exactly one month ago today, Georgia Tech woke up smarting from a last-second loss to Clemson.  The game plunged them to 10th place in the ACC standings and put their NCAA Tournament hopes on thin ice.  The Yellow Jackets haven’t lost since, stacking together their longest conference win streak in 25 years.

For a month, Georgia Tech met each moment by never letting the moment get too big for them.  That pressure has finally eased off, killed for good following a 70-66 win over Miami in the ACC Tournament quarterfinals.  There aren’t any trapdoors or bid thieves to worry about anymore.  No bubble watches or bracketologists to obsess over.  The Jackets know they’ll be going to their first NCAA Tournament since 2011.

But first they’ll look to cap off a resilient final month with one last, crowning 40 minutes of basketball – and a chance to go from off the radar to on top of the ACC. 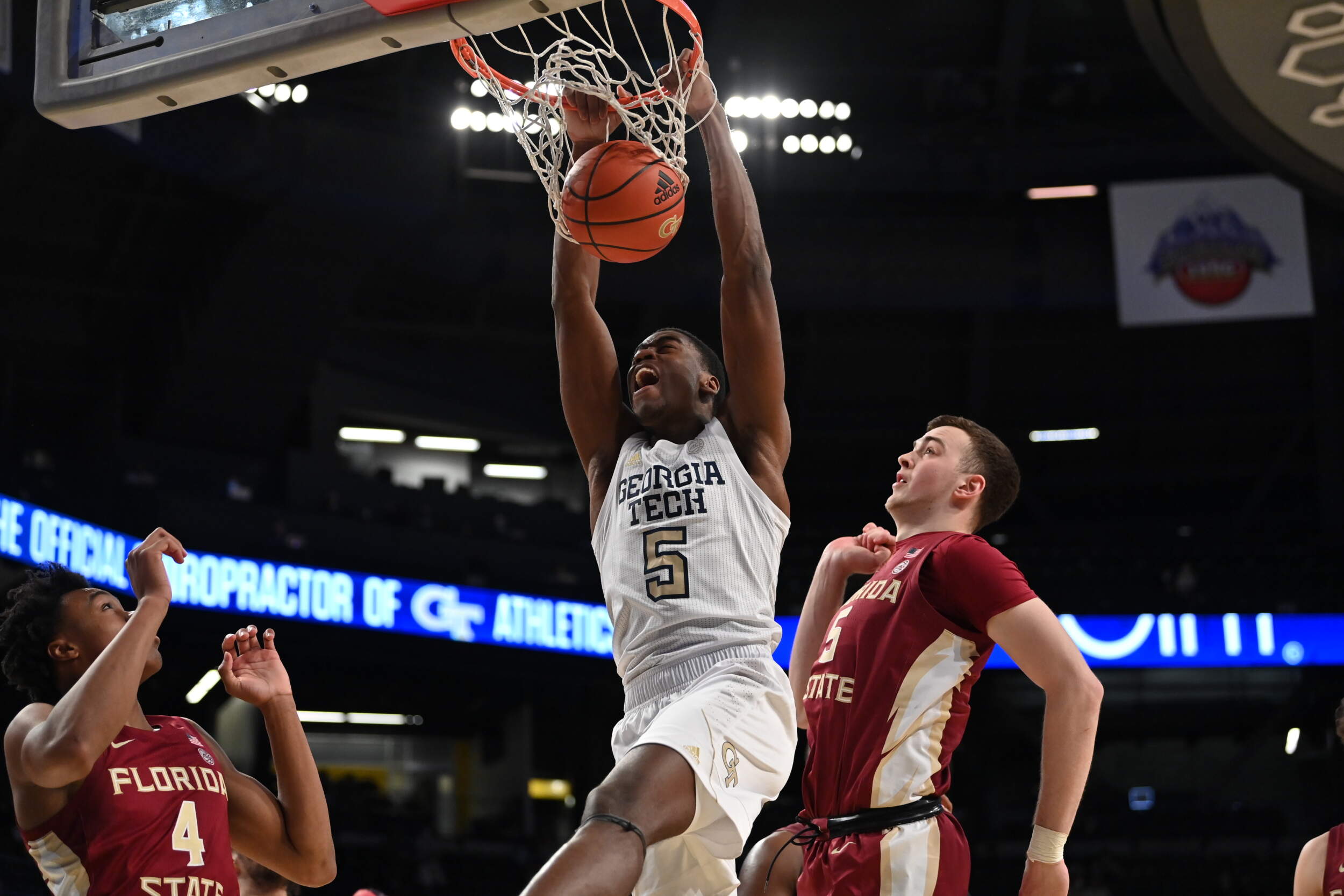 Georgia Tech’s first signature résumé win came against Florida State Jan. 30, when the Jackets outlasted the Seminoles 76-65 at McCamish.  FSU came in to the game ranked 13th in the nation in offensive efficiency; at 0.89 points per possession, Tech dealt them its lowest offensive rating of the season.

Much of that had to do with the Seminoles committing a season-high 20 turnovers.  Afterwards, Florida State head coach Leonard Hamilton said his team over-dribbled in the halfcourt, which prevented them from getting the kick-out threes they normally feast on.  The Seminoles finished the regular season ranked second in the ACC in three-point percentage (38.5%), but they converted just 3-of-14 against the Jackets.  Pastner praised his team’s “hand activity,” particularly the work of Moses Wright, who recorded a career-high six steals.  He also said the Jackets showed their “stick hand” on close-outs before FSU’s shooters could catch it.

The Seminoles function best when they get downhill and attack from the slots, leaving defenses vulnerable to drop-off passes to bigs like Balsa Koprovica or pitch-out passes to shooters like M.J. Walker.  Koprovica, a 7-1 sophomore and former high school teammate of Michael Devoe, had a team-high 17 points and 11 rebounds in their semifinal win over North Carolina.  Walker, a Jonesboro, Ga., native, leads the Seminoles in scoring (13.1 ppg) and earned a spot on the All-ACC second team.  FSU also has one of the trickier covers in the ACC in 6-8, 260-pound RaiQuan Gray, a third-team All-ACC pick who gives off Draymond Green vibes with his shooting, passing and rebounding.

Florida State has a famously balanced offense – teams can’t lock in on any one player, which makes them difficult to defend – but Walker could offer a subtle clue.  He finished the year shooting 44.1 percent from three-point range.  In FSU’s four ACC losses, he’s only 4-of-22.

In one statistic at least, maybe we should have seen this championship appearance coming.  Georgia Tech finished the regular season shooting 48.2 percent from the field in ACC play, its highest percentage since…. 1992-93, when it last lifted the ACC Tournament trophy.

That percentage didn’t exactly get a boost from the Seminoles, who led the ACC in field goal percentage defense (40.0).  Leonard Hamilton once again has a roster flush with depth and length, which allows FSU to help and recover as hard as any team in the league.  They also switch every ball screen and play up the line, making it difficult for teams to enter into their offense.

Tech was at its best in January when it attacked early, kept the ball in the middle third of the floor, and avoided playing side to side (a problem that plagued North Carolina in the quarterfinals).  Michael Devoe and Jose Alvarado were able to engage help but not get engulfed by it.  Alvarado made daring drives to the basket and finished with 21 points and six assists; Moses Wright, having more space to catch-and-go from the post, scored 23 after a somewhat muted performance in Tallahassee.

Forget the normal connotations of the phrase.  As Georgia Tech’s guards look to create before FSU can set its defense, “it’s all downhill” could be a good thing for the Yellow Jackets. 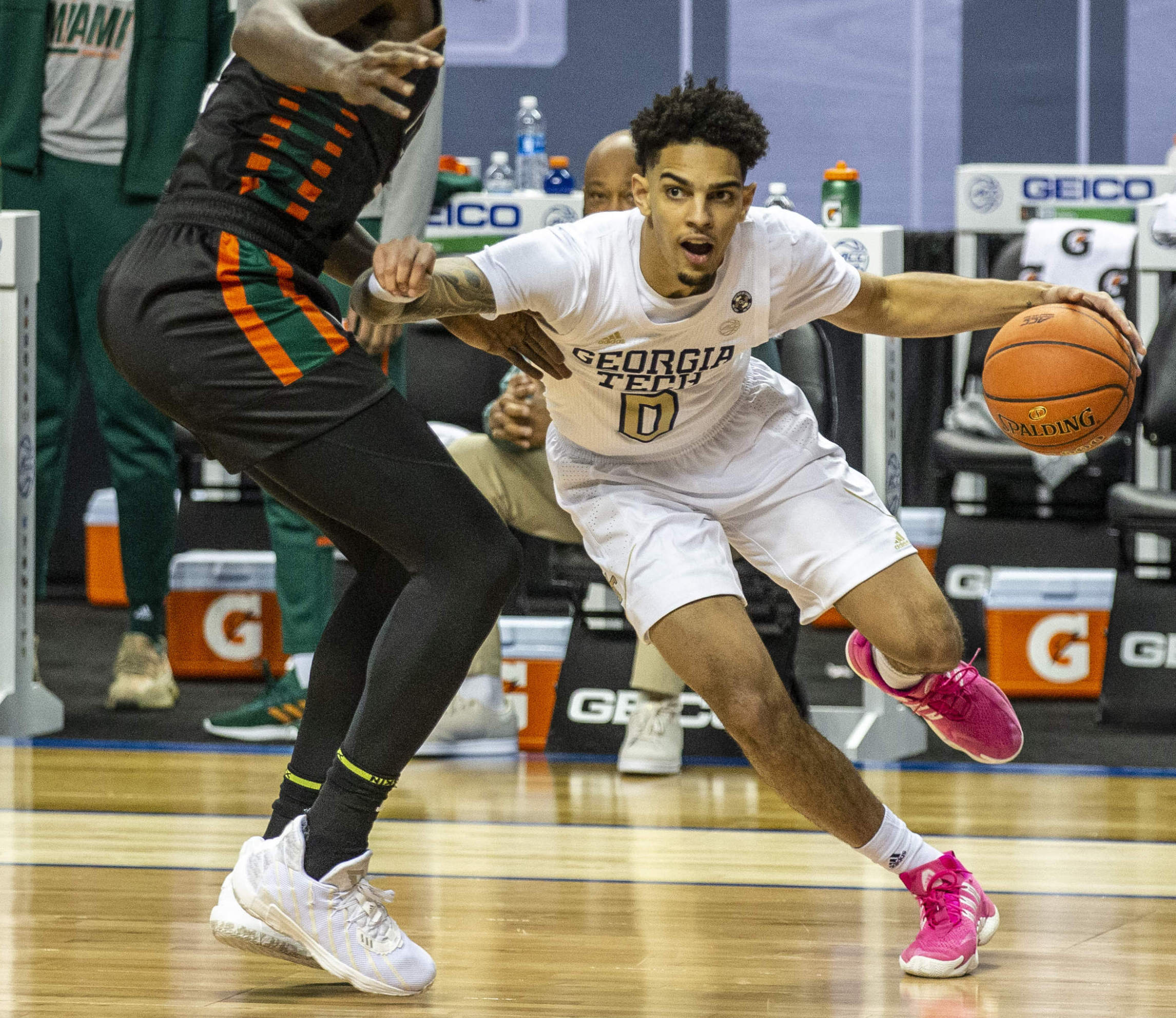 Michael Devoe has connected on 52.9 percent of his three-point shots against the ACC teams from his home state of Florida. (photo courtesy of Atlantic Coast Conference)

A statistic that could mean something or absolutely nothing:  in eight career games against Miami and Florida State, his home state schools in the ACC, Michael Devoe has made 52.9 percent of his three-point attempts.

Devoe played a hard-nosed game in Atlanta – even though he made 3-of-7 threes, Pastner loved his eight defensive rebounds even more.  He and the Jackets will duel with lottery pick Scottie Barnes, the ACC’s Freshman and Sixth Man of the Year who scored a team-high 16 against Tech in December.  Though 6-9, Barnes plays like a guard, with a shifty first step and an ability to long-stride into the lane.  He’s also predacious in transition and a terrific passer for his size.

Devoe, however, has experience in championship games with Barnes: as a senior he beat Barnes’ team in the GEICO High School Nationals championship in New York City.  Additional fun fact: the game was played at Christ the King High School, the alma mater of Jose Alvarado.

M.J. Walker wears #23.  According to FSU’s media notes, he chose the number as a tribute to his favorite player… LeBron James.  It could make him the first “M.J.” in basketball history whose choice of #23 was purely coincidental.