Tickets are on sale for the annual Induction Dinner on Sept. 21 (reception at 6 p.m., dinner and program at 7 p.m.) at $125 each through Aug. 15, $150 after Aug. 15. They can be purchased online (click here), and questions about the dinner and tickets can be directed to Barb Dockweiler (bdockweiler@athletics.gatech.edu) in the Alexander-Tharpe Fund.

If you gave Kristi Miller-North a choice, she’d still be playing tennis for Georgia Tech rather than lawyering like she is now, although she loves her job at Atlanta’s Baker & Hostetler LLP.

The Yellow Jackets would love to have her back, too, because you can’t do better than she did while winning more college matches in singles (152) and doubles (110) than any player in program history while suiting up for Tech from 2004-08.

On her way in from Marysville, Mich., she wasted no time jumping into college tennis, and it’s no wonder that she’ll enter the Tech athletic Hall of Fame on Sept. 21.

As a freshman, she set a school record for wins in a school year with 42 (passed a few years later by eventual teammate Amanda McDowell when she won 45 on the way to the 2008 NCAA individual title), and never slowed down.

All four of her seasons rank in the top nine in school history for singles wins, and she was front and center in what can easily be argued as the greatest run by any athletic team in Tech history.

Tech went to the NCAA’s Sweet 16 in her freshman and sophomore seasons, won the school’s first NCAA title when she was a junior in 2007, and made it to the NCAA quarterfinals in her senior year. The Jackets also won a national indoors title in her time.

Oh, and the Jackets beat vaunted Georgia in three of her four seasons, including her freshman year, when Tech topped the Dogs for the very first time in program history. There were tears that day.

A six-time All-American when you count outdoors and indoors, singles and doubles, Miller was stout on an off the court.

She graduated with a 4.0 grade point average in history, technology and society (now known as history and sociology), made the ACC Honor Roll all four years, was Academic All-ACC from 2006-08, won the Bobby Dodd Scholarship at Tech in 2006, and was the CoSIDA/ESPN The Magazine Academic All America in 2008, when she also won the ACC’s Weaver-James Corrigan postgraduate scholarship.

She gave birth in May to Miller North, and can be found at Tech tennis matches from time to time, wishing she was still an active Yellow Jacket.

Let’s lob a few questions at her and see how she hits back.

Question: First, how did you end up at Georgia Tech?

Answer: “I was playing all the junior tournaments on USTA, and my dad [Kevin] was introduced to [former coach] Bryan Shelton, and we just were so impressed with him and so impressed with Georgia Tech. I made an unofficial visit one summer, when I just had my driver’s license, and my dad and I were doing a southern road trip of sorts. We went to Florida State, Florida, Clemson, Auburn and Georgia.

“I didn’t know anything about Georgia Tech until my dad started looking at the school, and we were at a tournament in Peachtree City, and [Shelton’s wife] Lisa was there, and she was very friendly and pointed out Bryan.”

Q: How big was your transition from Marysville, a tiny miniopolis about an hour northeast of Detroit, hard by Lake Huron, to Tech and Atlanta?

A: “It was incredible because being from a small town I practiced mostly with boys because there weren’t a ton of players that lived close to me. I got on campus and had seven other great players to push me, and be on the court multiple hours instead of just an hour here and there, and then to have expertise of Bryan … my game just took off quicker than expected.

“I really thrived in that environment. My dad on Tuesdays and Thursdays would drive to Southfield (Mich.) for drills from 4-6, and a private lesson from 6:30-8. My dad sacrificed so much time for me and my sister.”

Q: Your first three memories from Georgia Tech: what’ll you have?

A: “Our first win over Georgia, freshman year. It was the first time Tech had ever beaten Georgia. I think I won 7-6 in the third at No. 1, and Alison [Silverio, now head coach at Notre Dame] fought out a tough match. We were on their indoor courts. I remember Bryan crying and taking pictures.

“Of course, winning NCAAs. My husband used to get offended when I said it was the best day of my life. There’s nothing like the high of winning a national championship and how hard you’ve worked to achieve that. That moment in Athens, when Alison clinched [against UCLA], and that epic picture of us jumping up and down.

“There’s really nothing like it. The only thing I can compare it with is having Miller. They’re both so joyful. Those four hours in Athens where we lost doubles point [to UCLA] … I still have people who come up to me who say that was best atmosphere they’ve ever been in.

“And probably our first ACC title. We beat Miami to win the first ever ACC title. There were so many firsts my freshman year. I could come up with 10 moments very easily.” 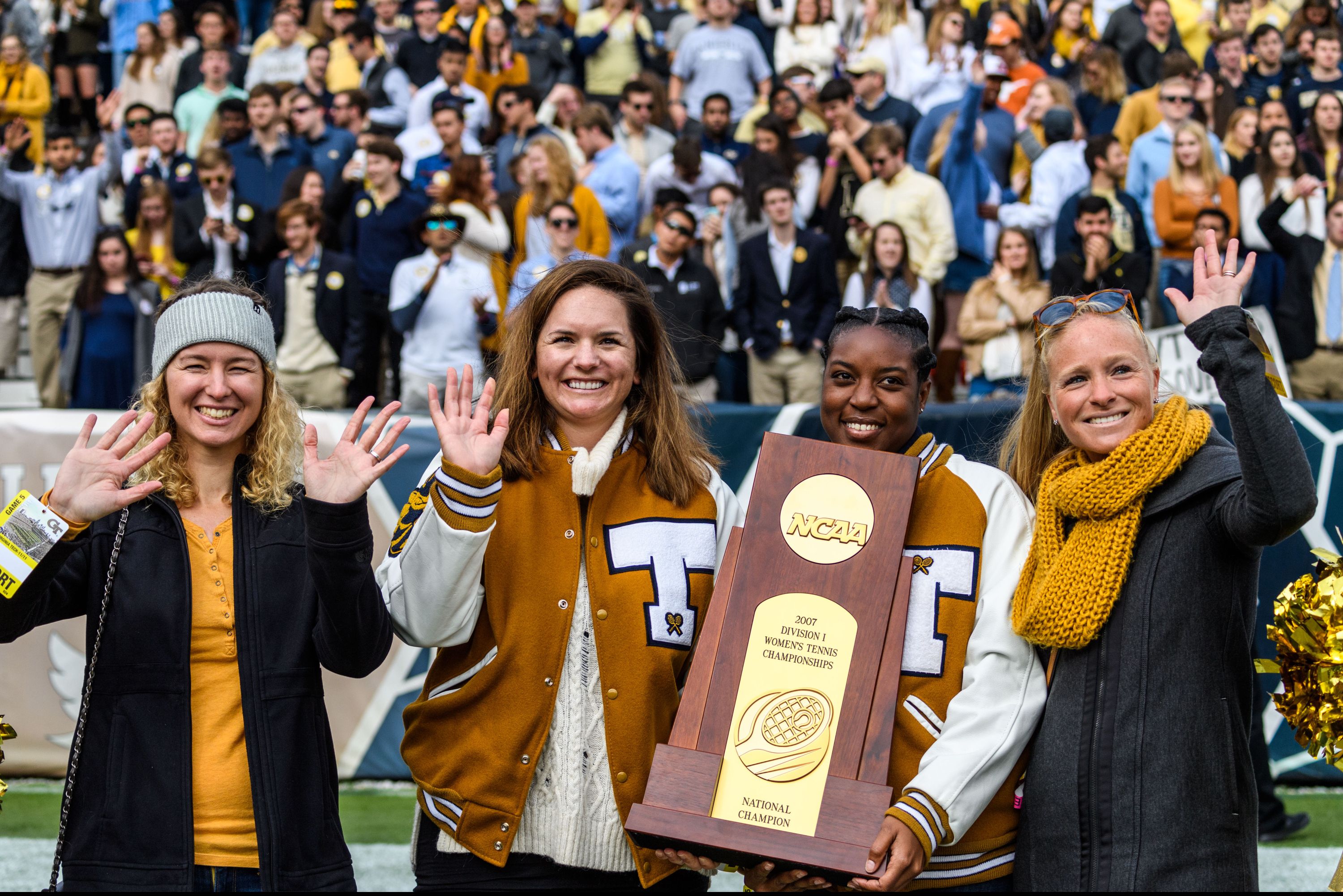 Q: Speaking of moments, wasn’t there some sort of tradition at ACCs that had to do with stopping for milkshakes after wins?

A: “We had several things. We would spray paint our shoes yellow [before ACCs], and we were really the first to do something like that and other schools started doing it. We made a bold statement, and we were confident. The idea came from Lyndsay Shosho.

“Coach would never let us have dessert. When we had very good wins or bad losses, we would sometimes beg him to let us go to Wendy’s … and get Frostys.

“I also remember after we won in the semis in Athens [in 2007], the only thing open was a pancake house.”

Q: You played professional tennis for about a year after graduating in 2008, and then stopped. Why?

A: “Once I turned professional, and I was playing as it being my job, it was very difficult for me to turn off my brain and enjoy it. It’s expensive and lonely. I would think about my expenses, and ‘if I win this match, I’ll make this amount of money, and I can play the next tournament.’

“In college, you have wonderful support, and trainers and coaches and gear. [As a pro] you’re on your own a lot, and it’s very lonely and difficult. I just decided I wasn’t happy anymore.

“It’s tough, and there is no guaranteed salary. If you get injured, you get no money. You really have to have a one-track mind to do it. And the pull toward academics has always been real strong.

“We were thinking about marriage and family, and those are things that are very, very difficult especially when you’re a woman. You have to be very selfish [to be a professional].”

Q: Were you able to carry over your scholarships to Emory Law school?

A: “I was fortunate that I had NCAA and ACC post-graduate scholarships, and I was lucky enough to receive the Woodruff Fellowship at Emory, which covered tuition. I was able to walk out without any loans. Theresa Wenzel, the former senior women’s administrator [at Tech], wrote a letter of recommendation.”

Q: What kind of law do you practice?

A: “I am in corporate law, on the transactional side of law, mergers and acquisitions . . . joint venture work, reviewing loan documents. I’m never in court.”

Q: How often, when you’re not doing the law thing, do you get back to Georgia Tech to watch tennis?

A: “I definitely come back and watch the women’s and men’s teams with my husband. I try to catch four to five matches each spring. The year they played NCAAs in Athens (2017), that was the 10-year reunion (of the national championship), and a lot of us were there. I went to ACCs in Rome (Ga., in 2017). It’s always so much fun.

“We were following online [in the spring, when Tech was in the NCAAs as this year’s Jackets made it to the national semifinals]. I was sending [former teammate and current Tech assistant coach Christy [Striplin-Lynch] pictures of Miller in his Georgia Tech onesy.

“She would show them the pictures in the huddle before matches. We were watching from the hospital and at home. Even if I’m not at a match, I follow them on Twitter.”

Q: Your induction figures to be a multi-layered celebration, as the four winningest players in Tech history are you and former teammates Striplin, McDowell and Silverio. Have you started working on your Hall of Fame speech?

A: “A little bit. I’ve started to jot some things down. It’s impossible to do it justice in the few minutes that you have with all the wonderful experiences that you have and people that I came to love. That’s the tough part to put into words.

“Still sometimes looking back, it was the favorite four years of my life. It’s just incredible to have your teammates and coach and compete at the highest level.

“Being in the workplace is nice, but you don’t get the competitive juices in the same way. Nothing compares to being a college athlete at Georgia Tech. Every time I’m back, I say I wish I had eligibility left.”