Hall was recognized by the conference for leading Georgia Tech – which was picked to finish fifth in the division during the preseason – to its first Coastal Division Championship since 2011. The Yellow Jackets finished the regular season 38-16 overall with a 19-11 conference mark to be ranked No. 6 nationally and carry a No. 2 seed into the ACC Tournament. 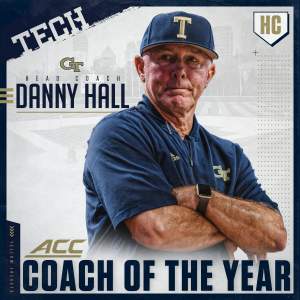 Hall was named ACC Coach of the Year for the first time since 2005 and the fourth time overall. His four selections as Coach of the Year are tied for third-most in conference history. The Coolville, Ohio native now owns 1,265 career wins, including 1,057 in his 26 years at Georgia Tech. He is one of four active ACC coaches who has won 1,000 career games and is the sixth-winningest active Division I baseball coach in the country.

Georgia Tech’s three selections to the 2019 all-ACC first team leads all schools, and the Yellow Jackets’ six total all-ACC selections tie with Clemson, Florida State and Louisville for the most this season. 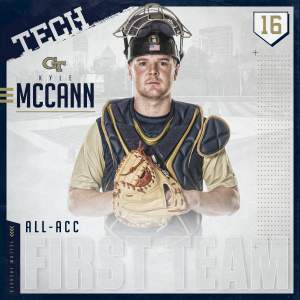 One of the top catchers in the country, McCann currently leads the ACC with 22 home runs (seventh nationally) and ranks third in slugging (.694) and fifth in on-base percentage (.465). One of three Jackets to start and play and every game this season, the junior is hitting .301 on the year and is leading the team with 63 RBI and 56 walks. Nationally, McCann ranks in the top 25 in six offensive categories. 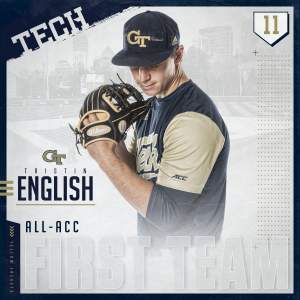 Preseason all-American English has been a two-way standout the entirety of 2019, but especially turned it on in ACC action. Hitting .319 overall on the year with 58 hits, 15 doubles and 15 home runs, but in conference play, ranked first or second in hitting (.381), slugging (.825), runs scored (.32), RBI (37) and home runs (11). When not playing first base, the redshirt junior has been the Jackets’ bona fide closer, leading the team with five saves on 13 appearances en route to a 4.66 ERA and a 2-0 record. 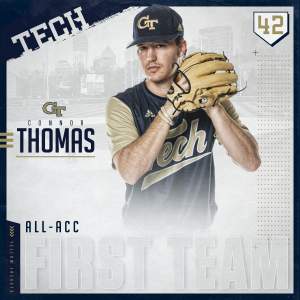 Two-time ACC Pitcher of the Week Thomas earns the honor after having a sensational year on the mound. Working to a 9-1 record and 3.11 ERA, Thomas has thrown two complete-game shutouts in less than 97 pitches – both in ACC play. The junior lefty really turned it on in conference play, ranking second in ERA (2.86), strikeouts (67), wins (seven), and walks (11). Overall, he led in innings pitched (98.1) and walks per nine innings (1.56), while ranking third with 93 strikeouts. 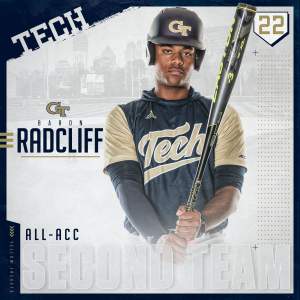 Radcliff had a breakout season in 2019, hitting .280 in 50 games played and 40 starts. He’s one of three Yellow Jackets with double-digit home runs, blasting 12 out of the park this year, while also amassing eight doubles for his 42 hits. He also sports a perfect 1.000 fielding percentage in right field, recording 70 putouts and two assists. 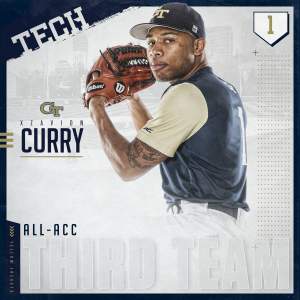 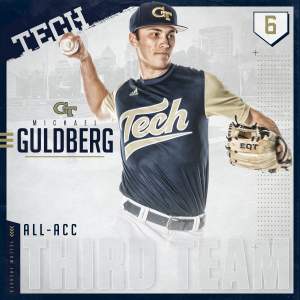 Guldberg is third in the ACC in batting, hitting .373, while also ranking seventh with an on-base percentage of .460. Curry holds the third-best ERA on the team with a 4.08 over 11 appearances and 10 starts. His 66 strikeouts and .262 opponents’ batting average sit second on the team.