THE FLATS – The NBA is set to return to action with 22 teams at the end of July, concluding a regular season that ended abruptly on March 12 in late July and then conducting playoffs, all at Disney’s Wide World of Sports in Orlando, Fla. Derrick Favors is the only one of the former Yellow Jackets in the NBA who will be a part of this restart, as his New Orleans Pelicans team is one of the 22 teams gathering at Disney.

This week’s #ProJackets Report compiles more of the latest news, stories and social media posts on former Jackets and their activities of the past week.

Operating the three-month completion of the NBA season at the Walt Disney World Resort will cost the NBA more than $150 million, sources told ESPN. The league is housing 22 teams plus support staff at three resorts, has arranged for seven practice courts and is playing games at three arenas during the quarantine. It is also providing meals, daily coronavirus testing and other medical support, security, transportation and entertainment for more than 1,500 people during the height of the event.  Read more

A reunion with a former long-time Jazzman, Derrick Favors, awaits the Utah Jazz when NBA play resumes in the Magic Kingdom. With COVID19 cases growing at an alarming rate in Florida, the NBA is—at this time—moving forward with their plan to create a bubble in the current epicenter of the coronavirus outbreak. The Utah Jazz have the honor of reopening the NBA’s schedule as they face the New Orleans Pelicans in the NBA’s first game back on July 30.

Favors, whom many believe will return to New Orleans next season, will be a key element to the Pelicans’ bid to reach the NBA playoffs. He could still be the Pelicans’ most important player. The “Favors Effect” is real. In games that he played at least 20 minutes, New Orleans was 19-17.  Read more

Former Georgia Tech star and NBA veteran Jarrett Jack has signed on with the Overseas Elite team which will compete in The Basketball Tournament, the annual winner-take-all event which begins Saturday, July 4, and concludes July 14. Games will be televised on ESPN, and all of them will be played at Nationwide Arena in Columbus, Ohio. This year’s event has 24 teams competing (23 games in 11 days), scaled down from the three-week, 64-team, multi-city event of the past.

Jack’s team, which also includes former Atlanta Hawk Joe Johnson, begins play July 9. They are considered one of the two best teams in the tournament, along with Carmen’s Crew, a team of Ohio State alumni. Jack is one of 35 players with NBA experience, and one of 10 first-round draft picks, competing in the tournament.

James Banks III, who completed two seasons with the Yellow Jackets in March, was announced as a member of the Stillwater Stars team, comprised primarily of former Oklahoma State players.

Thaddeus Young has two seasons left on his contract with the Chicago Bulls, but talk continues that the Bulls might trade him away.  Read more

In a recent interview with TrueHoop, Bosh spoke about his decision to join the Miami Heat, and why he ultimately felt it was the right decision. As he notes, he felt like he wasn’t getting anywhere with the Toronto Raptors and wanted to experience the same success as his peers.  Read more

It has also been reported that Bosh initially accepted a free agent offer from the Chicago Bulls, who made a strong bid for the former Tech star, in 2010, with plans to use his signing as a lure to also sign LeBron James and/or Dwyane Wade.  Read more

MARBURY TRANSITIONS TO COACHING IN CBA

Stephon Marbury has lived his best life in China, moving to the Middle Kingdom in 2010 to play in the Chinese Basketball Association (CBA) following an abrupt end to his career in the NBA. Over the past decade, the star point guard nicknamed ‘Starbury’ has felt the love of a nation, brought the first-ever basketball championship (and then two more) to Beijing and truly immersed himself in the local culture. He’s also become an icon and role model for millions of young Chinese ballers. After retiring in 2018, Marbury made the transition to coaching, and he presently serves as the head coach of the Beijing Royal Fighters.  Read more 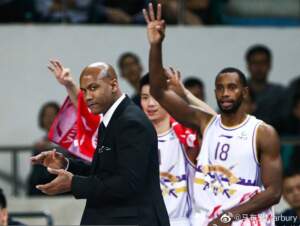 Stella Artois Leuven Bears (Euromillions League) re-signed 25-year old former Georgia Tech point guard Joshua Heath (188-81kg-94, college: Georgia Tech), according to Eurobasket.com. He played there last season. In 13 Euromillions League games he recorded averages of 11.3ppg, 2.2rpg and 4.8apg (top 4) and was voted Eurobasket.com All-Belgian League honorable mention. Heath ended the previous (2018-19) season at Ankara D.S.I. (Turkish TBL) in Turkish league where in 10 games he averaged 16.2ppg, 3.7rpg, 6.2apg and 2.2spg. But the most of that year he spent at Ilirija (Slovenian Liga Nova KBM) in Slovenian league. In 16 games he had 14.6ppg, 4.3rpg, 5.7apg and 1.3spg. Heath is is his fourth season in pro basketball.

Laying down the practice floors!

He joins former Nets teammate Joe Johnson on the squad. They tip off July 9 live on ESPN. pic.twitter.com/jbHg4YluZk

Welcome the best shot blocker in the ACC from the past two seasons to the squad, @1jamesbanks 💪 pic.twitter.com/Pqzp7X5ClL

Happy Sunday and stay safe!!! Keep that mask on, Hydrate, and pray/mediate all your worries away

Lord, I pray this second half of 2020 brings us joy, health, and celebration!

Much respect to the one of the best to ever do it @mrvincecarter15. One my childhood favorites to watch play. The game will miss you brother. #Respect pic.twitter.com/NP6W4demEt

.@ChicagoBulls forward @yungsmoove21 talks about athletes stepping up and being active in their communities.