THE FLATS – As with most professional and collegiate sports, the NBA and G-League 2019-20 seasons have been on hiatus since March 12. We are in week 9 without sports, but former Yellow Jackets in pro basketball remain busy. This week’s #ProJackets Report compiles some of the latest news, stories and social media posts on former Jackets and their activities since the stoppage of play.

THADDEUS YOUNG OPENS UP ABOUT HOME-SCHOOLING

In an interview with Bleacher Report, Thaddeus Young outlines the process he and his wife, Shekinah, undertake to home-school their two children. This is his first time spending the spring with his two kids, Thaddeus Jr., 9, and Taylor, 6; Young has been in the NBA their entire lives. And while he may have one of the world’s coolest jobs, there’s no doubt his schedule is grueling. For dads like Thaddeus, the worst part of a career in basketball is leaving their kids to travel. 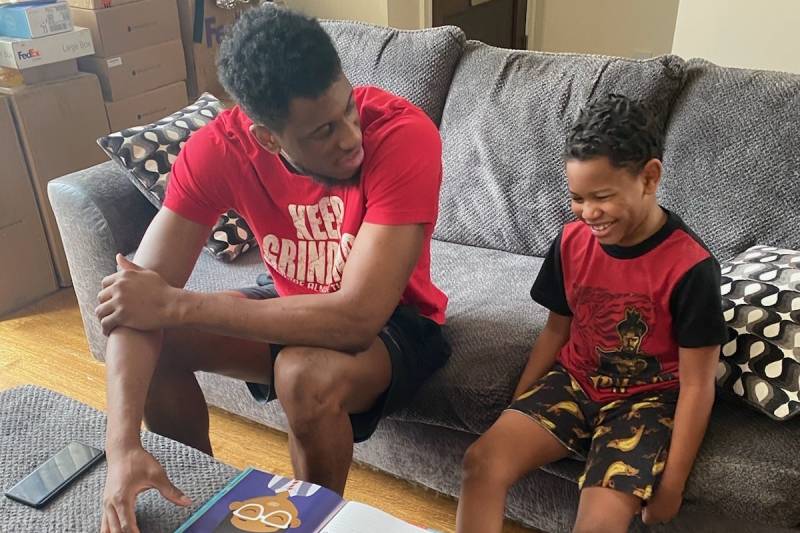 LOTS OF DEBATE ON FAVORS’ FUTURE

Derrick Favors continues to draw favorable reviews for his performance with the New Orleans Pelicans as the former Georgia Tech star moves toward possible free agency this summer.

On the website, The Bird Whites, Preston Ellis writes: “The New Orleans Pelicans most important player before the NBA suspended the 2019-20 regular season was not Brandon Ingram, Jrue Holiday, Zion Williamson or Lonzo Ball. It was Derrick Favors, by a landslide. After a horrid 6-22 start in which the Pelicans were left with more questions than answers, Favors’ return spurred a 22-14 run that vaulted New Orleans right back into the thick of the playoff race with 18 games to play and the league’s easiest schedule remaining.”

Favors was one of three free agent pickups for the Pelicans last off-season that led an overhaul of the team’s roster. He also is mentioned as a possible sign-and-trade target by Forbes.

Did you know? Favors is one of four NBA players – Giannis Antetokounmpo, Anthony Davis, and Rudy Gobert are the others – who have shot 70% or better on at least 200 restricted-area attempts in each of the last three seasons.

In an interview with the Sun-Sentinel, Chris Bosh weighed in on a debate between Stephen Curry and Dwyane Wade. When asked about the Heat’s (nicknamed the “Heatles”) place in the pantheon of NBA history, Bosh noted his belief the Warriors hold a higher place than South Beach’s favorite sons.

“I was thinking about our place in the history of the game and all that stuff,” Bosh said. “I even think the Warriors had more of a dynasty. I think ours was, you know the band Cream, from the UK? We’re more like Cream.”

OKOGIE GRADES OUT WELL IN MINNESOTA

From Ben Beeken in the website Dunking with Wolves: Josh Okogie is just one of two Minnesota Timberwolves players who was on the roster when Gersson Rosas took charge 12 months ago. Okogie was the first-round pick of Rosas’ predecessor, Tom Thibodeau, in the June 2018 draft. He was taken with the No. 20 selection and profiled as a defense-first guard with the ability to grow into a 3-and-D role all while using his impressive athleticism in the open floor. Now, 136 games into Okogie’s tenure as a pro, at least two-thirds of the above appears to have played out as expected.

FOND LOOK BACK AT BOSH’S CAREER WITH TORONTO

Cameron Fields takes a fond look back at the career of Chris Bosh in Toronto in AmicoHoops. Bosh became a champion in Miami, but his name was made in Toronto. Bosh was part of the illustrious 2003 NBA draft class, being taken No. 4 overall in the first round by the Raptors. Coming out of Georgia Tech, he was one of the best bigs in the draft. As a predecessor of the modern big, Bosh was a force on both ends of the floor while with the Raptors. We also like this story because of the lead photo, Bosh defending Thaddeus Young, who then played for the Sixers.

The face you make when you know your beat is 🔥🔥. Episode 2 of OOLF ‘Out of Left Field’ is out now🚨Leave a comment and let me know what you think 🙏🏿🙏🏿—> https://t.co/2QuGkOHjyG pic.twitter.com/9W95JLh5pd

Anybody feeling nostalgic about past vacations? Where’s the first place you want to travel to after this is all over? I found some amazing old footage of a safari I went on in South Africa a few years back. I ate crocodile carpaccio. PROOF –> https://t.co/fUu3HHvbbE #TBT

Reply to this with tags, mentions & shoutouts for all of our amazing teachers of #HEATTwitter

Even though I have alot to be thankful for. This day is always tough for me. Mom, I miss you. I know you are still sprinkling your blessings on me from heaven.Your guidance & love has help me become the man I am today. I love you. Thank you. #HappyMothersDay #CancerSucks pic.twitter.com/BMawJk5iXa

Happy Mother’s Day to all the Moms. Especially @Mrs___Young21 the superhero, wife, & mother. I am truly blessed & thankful to have u. You’ve provided me with growth and happiness. You’ve given me 2 blessings in TJ & Taylor along with many other blessings. 😍😘 #DopeMomClub pic.twitter.com/dKkczszCXs