During the off-season, the Chicago Bulls were looking for versatility, toughness and veteran leadership to help mentor their young core of Lauri Markkanen, Wendell Carter Jr., Zach LaVine and Coby White. So it came as no surprise that the Bulls made Thaddeus Young their first acquisition of the free-agency period this summer, signing the former Yellow Jacket to a three-year deal.

The Bulls will be Young’s fifth team since being selected with the 12th pick in the first round of the 2007 NBA draft by the Philadelphia 76ers, where he played from 2008-14, helping the team to five playoff appearances during his time in Philly.

Young played on the Yellow Jackets squad that went 20-12 in the 2006-07 season. He averaged 14.4 ppg while helping lead the team to the NCAA tournament. He dropped a career-high 30 points in a thrilling overtime loss to Wake Forest in the ACC Tournament, and was named ACC All-Freshman in his lone season on The Flats.

Now Young, who has played in 51 career playoff games, is in Chicago helping teach this young team what it takes to get back to the post season for the first time since 2016-2017.

Young took a few minutes to catch up with RamblinWreck.com after the Bulls’ 113-93 victory over the Atlanta Hawks earlier this season. 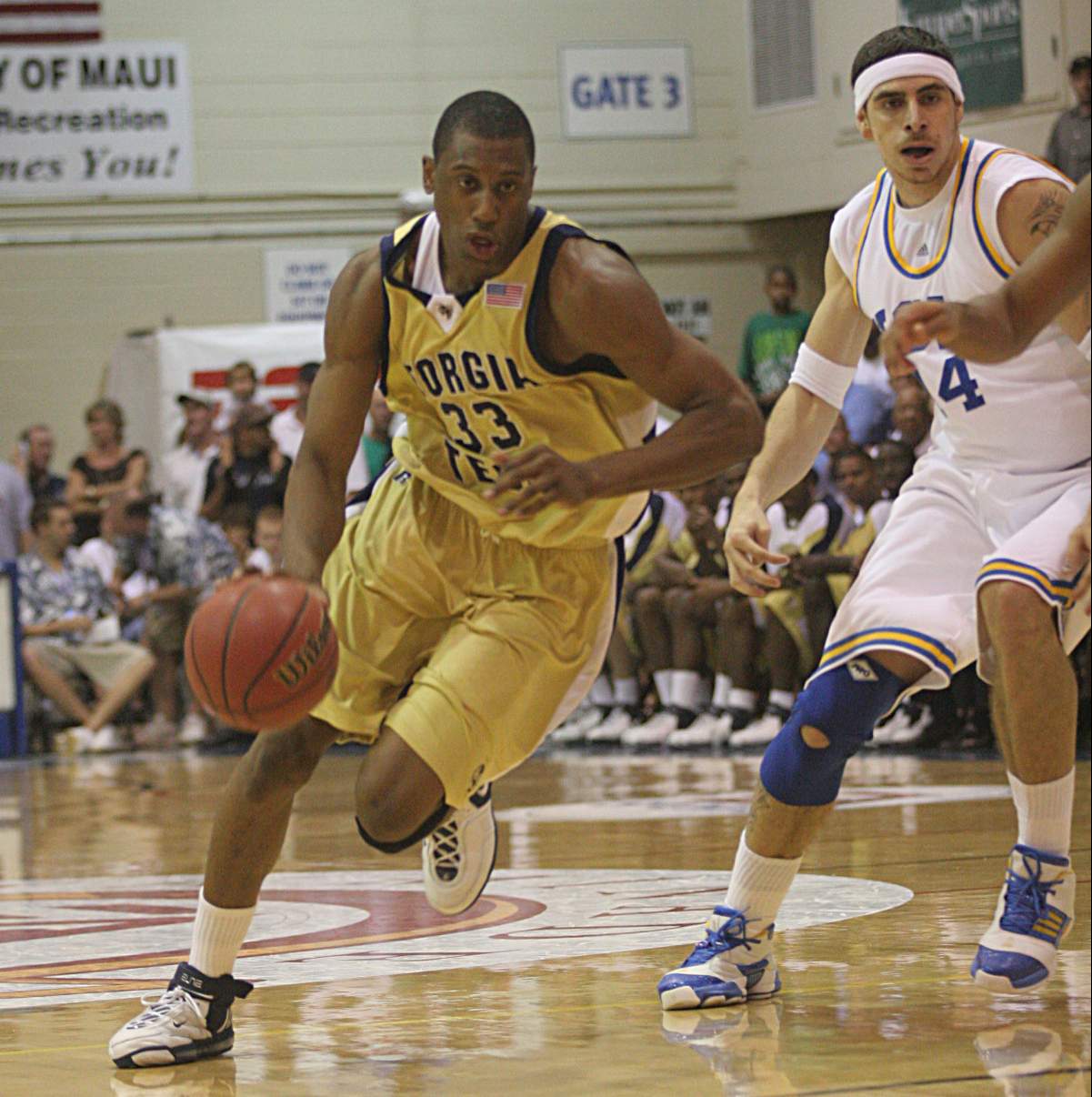 Among the highlights of Thaddeus Young’s season at Georgia Tech was a runner-up finish in the Maui Invitational.

RW.com: How do you enjoy coming back to Atlanta to play?

Young: “It’s always cool. You get to see some of your friends and some of the people you went to school with. And it’s also a chance to come back and play in front of some of the Georgia Tech people. It’s always a cool experience.”

RW.com: Do you still follow the Georgia Tech program throughout the year?

Young: “Yeah, I try to look at a lot of the stuff that they’re doing through social media feeds and they also send blast emails with alumni stuff, so, I try to keep up with everything that’s going on with sports from football, to basketball, to baseball, to softball, tennis, everything.”

RW.com: What appealed to you about coming to Chicago when you signed this offseason?

Young: “At the end of the day, they had a fairly young team with some good pieces that can really ball. Our record doesn’t indicate what type of team we could be, but we could be a very talented team. We just have to play up to par in the second half of games. That’s one of the things that I’ve been harping on, just helping teach the guys how to win. Obviously I came from winning cultures and helped build playoff teams and be a leader on those playoff teams, so, just trying to bring those types of things to it.”

RW.com: How have you gone about taking a leadership role with this young core in Chicago?

Young: “Just being vocal and making sure they understand how to win games, making sure they understand we’re going to take our bumps and our bruises, but we have to continue to walk toward the light as opposed to shying away and going into the darkness and hiding in the corner. With that being said, it’s just a matter of staying vocal with the guys and getting them to understand this is the way we have to play in order to go out and win games with the personnel we have.”

RW.com: What is it like playing and living in Chicago?

Young: “It’s definitely different than Indiana. Indiana has a rich basketball history also, but Chicago is a much bigger scale, much bigger city. The only thing I hate is the traffic. But I love playing with these guys. They’re a great group of individuals. I think it’s just a matter of how you fit into the city. It is a great city. They have some of the best food in the world, lots and lots of restaurants, lots of stuff to do. My wife can go shopping, my kids can go to different parks and indoor events and stuff like that.”

RW.com: What advice would you give to a Georgia Tech basketball player who wants to be an NBA veteran like you one day?

Young: “Just don’t take it for granted. Go to work each and every day, whether it is in the classroom or on the court, and make sure you’re prepared for anything that comes at you.”

RW.com: Do you have a favorite memory from your time at Georgia Tech?

Young: “All of my games at Georgia Tech. I was only there for one year, so that was a memorable year simply because we had a special group of guys. We didn’t make it as far as we wanted to, but we all bonded very well together, we all played very well together, and it was just a good group. I loved the coaches, I loved the staff, I loved the people who welcomed me into the Georgia Tech family. It was just a close-knit group that wanted to go get the job done. I also had great memories of going to the football games and watching Calvin Johnson play, and also playing against top-tier teams like Duke and North Carolina. All of those are great memories.”

Derrick Favors returned to action Monday against the Brooklyn Nets after missing time with a lingering knee injury … Josh Okogie has Timberwolves in the middle of the pack in the Western Conference … Thaddeus Young leads young Bulls team past the Hawks … More in this week’s Georgia Tech #ProJackets Basketball Report.

Favors missed three games with a reported knee injury but returned to action Monday night in a loss to the Nets, playing just eight minutes and going scoreless.

Since his dramatic defensive stop of Kyrie Irving at the end of Minnesota’s season-opening 127-126 win over the Nets, Okogie has averaged 7.9 points and hit 51.4 percent of his shots from the floor at the Timberwolves has built a 4-3 record and are tied for eighth in the West. The 2018 first-round draft choice averaged 11 points in the Wolves’ 3-0 start, but just 5.5 since. He made his first start Wednesday against Memphis, hitting 3-of-4 field goals for seven points and four rebounds.

Young watched his team waste a 65-48 halftime lead and lose to the Lakers on Tuesday, but turn around and rout the Hawks by 20 on Wednesday night. The 14-year veteran has averaged 9.9 points and has logged four double-figure games this season for the youthful Bulls.

Alade Aminu (6’10”-F/C-87, graduated ’09, plays pro in Poland) could not help Polski Cukier Torun (1-3) in their last game. Despite his good performance Polski Cukier Torun was badly defeated113-95on the road by the higher-ranked (#3) Sassari. Aminu had a double-double by scoring 13 points and getting 11 rebounds in 30 minutes. It’s Aminu’s first season with the team. This year he averages 8.8ppg, 8.0rpg and 1.3apg in six games he played so far.

Daniel Miller (6’11”-C-91, graduated ’14, plays in Japan) led Sendai 89ers to a 3-point victory over the second-ranked Kagawa FA (9-4) 97-94 in the Japanese B2 League on Tuesday night. Miller was MVP of the game. He recorded a double-double by scoring 30 points and getting 19 rebounds. Miller also added 8 assists, 5 blocks and 3 steals. It was the game of the round between two top 3 ranked teams in group East. Sendai 89ers (10-5) are placed second. But this is still an early stage of the season and everything may happen. Miller has individually a very good year with high stats. He averages 15.7ppg, 11.5rpg, 5.3apg, 1.7bpg and 1.2spg.

James White (6’8”-F-93, graduated ’16, currently in Russia) was not able to help Ural Ekaterinburg in their game against CSKA Moscow 2nd team (2-3) in the Russian Superleague 1 (second division), despite his good performance in Tuesday night’s game. He scored 12 points, grabbed 9 rebounds and made 2 blocks in 34 minutes. But Ural Ekaterinburg lost92-85in Moscow to the higher-ranked (#11) CSKA 2nd team. But the season just started, so everything may happen. White has very impressive stats this year 16.8ppg, 9.3rpg and 2.3apg in four games.

Trae Golden (6’3”-PG-91, graduated ’14, plays pro in Turkey) was the major contributor in a 2-point Bahcesehir Koleji Istanbul’s victory against the closely-ranked Sibiu (0-3) 83-81 in the FIBA Europe Cup last Wednesday. Golden recorded a double-double by scoring 15 points and making 13 passes. It was the game of the round between two top 4 ranked teams. Bahcesehir Koleji Istanbul (2-1) is placed second in the FIBA Europe Cup. There are only three games left until the end of the FIBA Europe Cup Regular Season. So now every game will be critical. This season Golden has very high stats. He averages 18.0ppg, 3.0rpg, 10.0apg and 1.3spg.

Glen Rice Jr. (6’6”-G/F-91, graduated ’12, plays in Australia) was not able to secure a victory for New Zealand Breakers (2-5) in their game against United (4-4) in the Australian NBL, despite his very good performance in Thursday night’s game. He was the top scorer with 26 points. Rice Jr. also added 3 assists (made all of his twelve free throws !!!) in a mere 18 minutes. It was his first game for New Zealand Breakers this season. But New Zealand Breakers were edged104-101in Melbourne by the higher-ranked (#5) United. But the season is still in its first stage and everything can happen.

Zachery Peacock (6’8”-C-87, graduated ’10, currently in France) contributed to an easy victory against the 16th-ranked Le Portel 90-74 in the French Jeep ELITE ProA in Friday night’s game. He recorded 9 points and added 4 assists. Peacock has relatively good stats this season 14.4ppg, 3.9rpg and 2.3apg.
Thaddeus Young (6’8”-F-88, graduated ’07, plays pro in the NBA) couldn’t help the Chicago Bulls in their game against the Indiana Pacers in the NBA, despite his good performance in Sunday night’s game. Young recorded 12 points and had 3 steals in 26 minutes. But his team lost 95-108 in the NBA. Young has relatively good stats this year 9.9ppg, 3.6rpg, 1.4apg and 1.2spg in nine games.

Ben Lammers (6’10”-C-95, graduated ’18, plays in Spain) couldn’t help RETAbet BB in their game against La ICL Manresa in the Spanish Liga Endesa. He recorded 7 points and grabbed 6 rebounds. His team was defeated 101-97. This season Lammers averages 6.4ppg and 5.0rpg.

Notice: The list above includes only some of alumni playing currently in pro basketball. Check complete list of Georgia Tech basketball alumni.