In case you missed it, over the summer the New Orleans Pelicans made a big move to upgrade their front line, acquiring a big man who dominated the Atlantic Coast Conference in his one season — winning conference Freshman of the Year and helping his Georgia Tech team to an NCAA Tournament berth.

Of course, they also brought in Zion Williamson, but the Pelicans’ acquisition of former Yellow Jackets center/forward Derrick Favors is already paying off. Favors has started and, in the opener, grabbed seven rebounds, scored six points on 3-for-6 shooting, and had two assists and a blocked shot in just under 21 minutes in the season-opener at defending champion Toronto. He followed that up by going for 16 point on 8-for-10 shooting with seven boards in the team’s home opener.

He’s basically been the consummate professional and a veteran presence on the court, in addition to serving as a role model and mentor for Williamson.

Favors’ professionalism and production should not surprise. In his lone season on the Flats, the former McDonald’s All-American stepped right in, earning 2009-10 ACC Rookie of the Year and made the ACC All-Freshman team, finishing second in the conference in field goal percentage (.613) and blocked shots (74, 2.1 bpg), third in offensive rebounding (108) and defensive rebounding (195) — he was fourth in total boards (303, 8.4 rpg). He also made the 2010 All-ACC Tournament first team, averaging 17.0 points and 9.8 rebounds as the Yellow Jackets recorded a four-point win over North Carolina, a five-point win over No. 19 Maryland and a three-point decision over NC State before falling by four in the championship game to Duke.

The New Jersey Nets selected Favors with the third overall pick in the 2010 NBA Draft, but at that season’s trade deadline, sent him to the Utah Jazz as part of a blockbuster trade despite Favors being on his way to earning NBA All-Rookie second team honors. Over the next eight seasons, Favors became a solid foundation piece for the Jazz as they built up to a team that, over the past three seasons, won 50 games twice.

On July 7, eight days before his 28th birthday and a year and a day after he re-signed with Utah, the Jazz traded Favors to New Orleans. The Pelicans saw in him the kind of veteran leader every team craves, and especially one breaking in a potential generational talent like Williamson. Of course, the South Atlanta native believes the move back to the South also will prove beneficial for him. He’s fired up for the upcoming season with the up-and-coming Pelicans.

Favors took a few minutes to chat with Ramblinwreck.com prior to a preseason game with the Atlanta Hawks about moving back home, moving Williamson forward, and moving the Pelicans up in the hotly contested Western Conference. 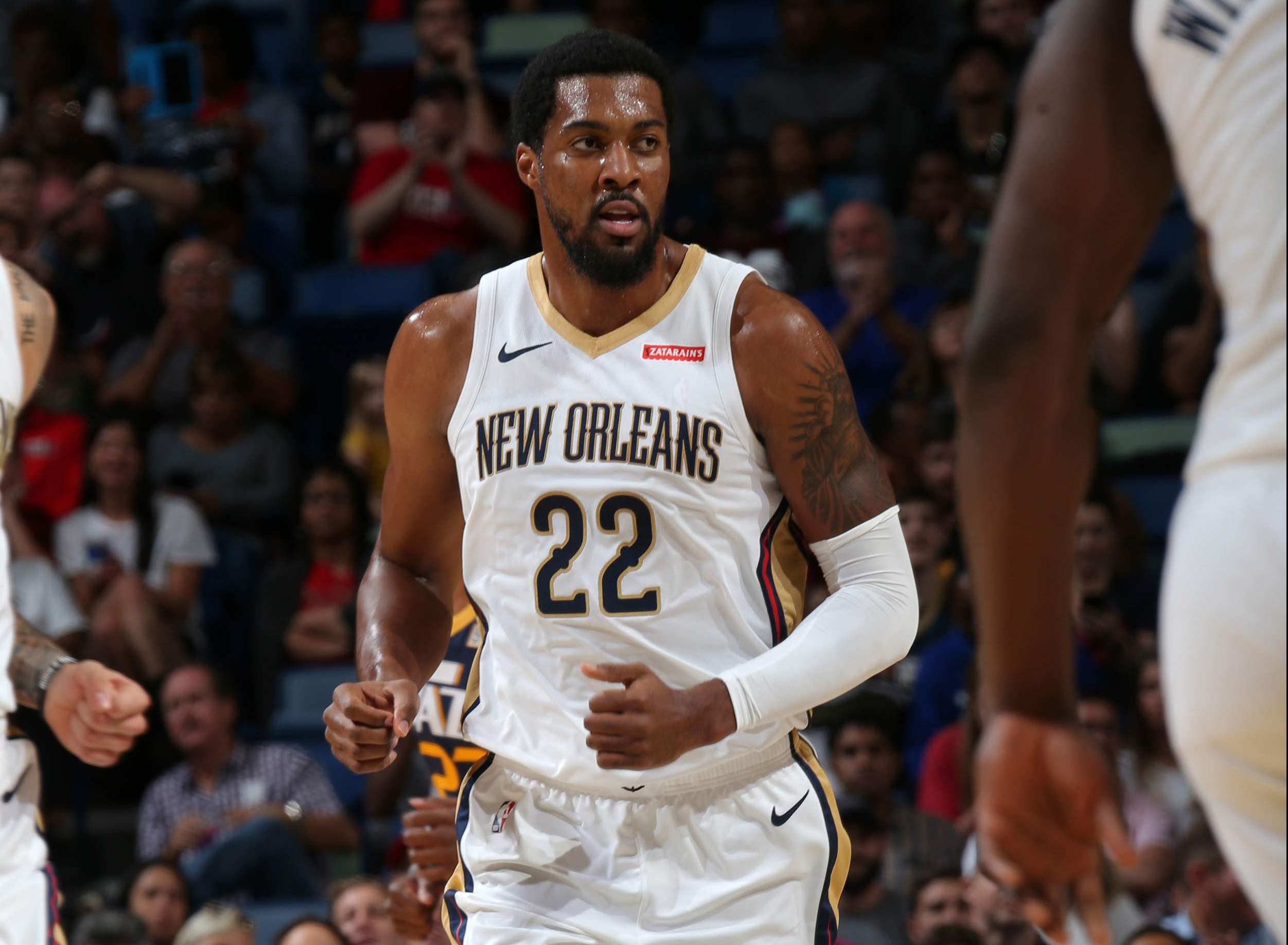 RW.com: How special is it for you returning to Atlanta to play?

Favors: “It always feels good, especially with a new team. I’m excited to be here.”

RW.com: What do you like about this new team?

RW.com: What’s the best part of coming back closer to home?

Favors: “Being closer, my family can come see me play, they can stay up and watch games now. There are a lot of positives, and I’m excited about it.”

RW.com: The first trade is always hard. How was this trade different than the one from New Jersey to Utah? What was your first reaction to finding out about it?

Favors: “I was excited. Obviously, just moving closer to home, being with a new group, bringing new energy. Sometimes change is good. I’m happy to be here.”

RW.com: You’re in your 11th NBA season and being counted on to show Zion Williamson the ropes. What have you seen in him so far?

RW.com: In what ways are you still improving your game?

Favors: “Just getting more opportunity offensively, being more impactful in the games and playing my game so the team can get better.”

RW.com: Everyone talks about New Orleans losing Anthony Davis, but the team brought in a lot of talent. How do you see the team’s potential?

RW.com: What’s the one thing you’re most excited about in being in New Orleans?

Favors: “Really just being close to home (smiles). It’s like an hour flight. My family can come see me play, a new city, being back down South, there are a lot of positives.”

Alade Aminu (6’10”-F/C-87, graduated ’09, plays pro in Poland) could not help one of league’s weakest teams Polski Cukier Torun (1-2) in their last game. Despite his very good performance Polski Cukier Torun was badly defeated122-105on the road by the higher-ranked (#6) Hapoel Holon. Aminu was the second best scorer with 20 points. He also added 9 boards, passed 5 assists and added 3 steals in 30 minutes. But this is still an early stage of the season and everything may happen. This year Aminu averages 8.0ppg, 7.4rpg and 1.2apg in five games he played so far.

James White (6’8”-F-93, graduated ’16, plays in Russia) was not able to help Ural Ekaterinburg (1-3) in their last game on Friday. Despite his very good performance Ural Ekaterinburg was defeated84-74in Yaroslav by the higher-ranked Burevestnik (#8). White recorded a double-double by scoring 21 points and getting 15 rebounds. But the season just started, so everything may happen. It’s White’s first year with the team. He has individually a very good season with high stats. White averages 18.3ppg, 9.3rpg and 2.7apg.

Trae Golden (6’3”-PG-91, graduated ’14, currently in Turkey), who plays in Turkey was not able to secure a victory for one of league’s weakest teams Bahcesehir Koleji Istanbul (1-1) in their last game. Despite Golden’s very good performance Bahcesehir Koleji Istanbul lost71-66on the opponent’s court to the leading Oradea. He had a double-double by scoring 24 points and making 10 passes in 35 minutes. There are only four games left until the end of the FIBA Europe Cup Regular Season. So now every game will be critical. It’s Golden’s first season with the team. Golden has very impressive stats this year 19.5ppg, 3.0rpg, 8.5apg and 1.5spg in two games.

Zachery Peacock (6’8”-C-87, graduated ’10, plays pro in France) led JL Bourg Basket to a victory over the 12th-ranked Le Mans (2-4) crushing them 86-55 in the French Jeep ELITE ProA in Saturday night’s game. Peacock was MVP of the game. He scored 18 points (went 5 for 5 at the free throw line). JL Bourg Basket (5-1) is placed third in the Jeep ELITE ProA. But the season is still in it’s first stage and everything can happen. It’s Peacock’s fifth year with the team. This season Peacock has very high stats. He averages 15.3ppg, 4.0rpg and 2.0apg.

Derrick Favors (6’10”-F-91, graduated ’10, plays in the NBA) couldn’t help the New Orleans Pelicans (0-4) in their last game. Despite his very good performance the New Orleans Pelicans (0-4) lost123-116in Dallas to the Mavericks. Favors was the second best scorer with 16 points. He also added 7 rebounds in 22 minutes. So far Pelicans lost all four games in the Regular Season. But there are still lots of games to play and it’s a long way to go. It’s Favors’ first season with the team. Favors has relatively good stats this year 8.7ppg, 6.3rpg and 2.0apg in three games.

Thaddeus Young (6’8”-F-88, graduated ’07, currently in the NBA), who plays in the NBA couldn’t help the Chicago Bulls (1-3) in their last game on Wednesday. Despite his very good performance the Chicago Bulls were edged126-125in Charlotte by the Hornets. Young was the second best scorer with 17 points. He has relatively good stats this season 11.0ppg, 2.3rpg and 1.5apg.

Josh Okogie (6’4”-G-98, graduated ’18, plays pro in the NBA) contributed to an easy victory against the Charlotte Hornets crushing them 121-99 in the NBA in Friday night’s game. Okogie recorded 14 points, 4 rebounds and 3 assists in 26 minutes. He has relatively good stats this year 11.0ppg, 4.3rpg, 2.7apg and 1.3spg in three games. Okogie is a naturalized Nigerian.

Ben Lammers (6’10”-C-95, graduated ’18, currently in Spain) contributed to a RETAbet BB’s victory against the 15th-ranked Baloncesto Fuenlabrada 92-80 in the Spanish Liga Endesa on Sunday night. He scored 6 points and grabbed 7 rebounds in 15 minutes. This year Lammers averages 6.3ppg, 4.8rpg and 1.2bpg in six games.

Notice: The list above includes only some of alumni playing currently in pro basketball. Check complete list of Georgia Tech basketball alumni.