Tech (12-17, 4-12 ACC), in its third season under head coach Josh Pastner, has lost nine of its last 10 games after dropping an 81-51 contest at No. 2 Virginia Wednesday night. Tech’s only victory since Jan. 22 came last Wednesday night in a 73-65 decision over Pittsburgh. The Yellow Jackets, 10-7 at home this season but 3-5 in ACC play, sit alone in 13th place in the ACC standings, a half-game behind Miami and Wake Forest.

Boston College (14-13, 5-10 ACC), in its fifth season under head coach Jim Christian, has won three of its last five games and sits alon in 10th place in the ACC standings. All three of those victories have come at home, including a 66-59 decision over Louisville Wednesday night. The Eagles are 1-7 on the road this season in conferencve play, having won at Wake Forest back on Jan. 26.

Sunday’s game will be broadcast live on ESPNU and will be streamed live on the internet through the ESPN app, available through the ESPN app. Radio coverage is provided on the Georgia Tech IMG Sports Network, airing in Atlanta on 680 AM and 93.7 FM the Fan. The Tech broadcast is available on satellite radio (Sirius ch. 84, XM ch. 84, internet ch. 84).

Alston, a 6-5 guard from Vienna, Va., is finishing his second season as a graduate transfer after three years at Lehigh, and has played in 56 games as a Yellow jackets, starting 24 while averaging 6.3 points per game. He is finishing his master’s degree in ecnomics this semester.

Ogbonda, a 6-10 center from Port Harcourt, Nigeria, attended National Christian Academy in Washington, D.C., before coming to Tech, where he is a fourth-year junior in terms of athletic eligibility. After a redshirt year in 2015-16, he has played in 42 games as a backup in the post, and is completing course work this semester for his bachelor’s degree in business administration.

Gueye, a 6-9 forward from Dakar, Senegal, is a fifth-year senior who has played in 86 games and started 39 during his career. He attended Central Park Christian School in Birmingham, Ala., before coming to Tech. He took a redshirt year in 2015-16 and has been a part-time starter in the last two seasons. He is finishing his degree requirements in business administration this semester.

Sylvester Ogbonda graduates in May with a year of eligibility remaining. 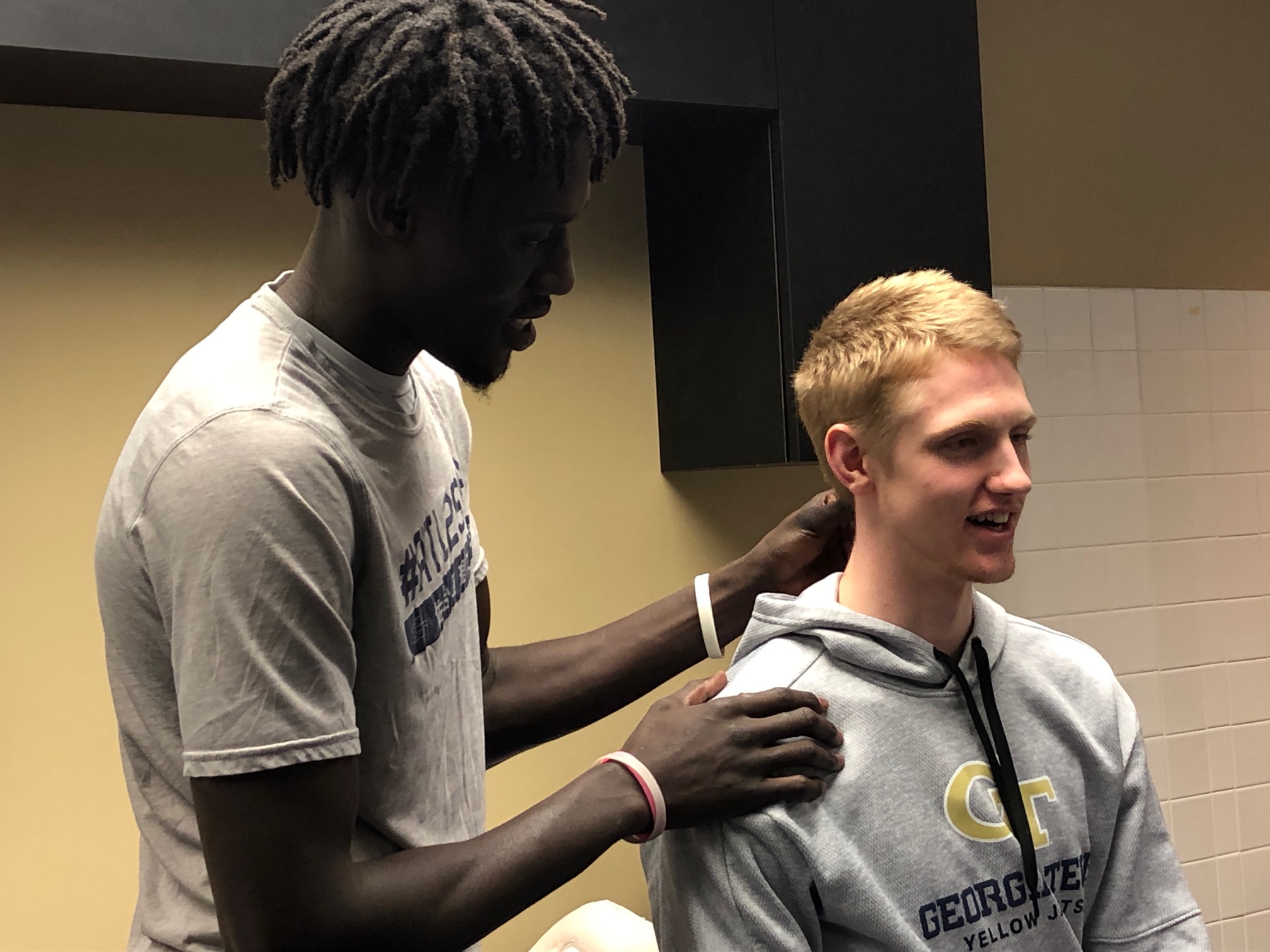 Abdoulaye Gueye, the oldest member of the Yellow Jackets, horses around with one of the youngest, freshman Kristian Sjolund, before Friday’s practice.