The three-player class is rated the 17th-best in the nation and third-best in the Atlantic Coast Conference according to the 247Sports composite team rankings. Coleman, a 6-6 guard from Callahan, Fla., at No. 48 nationally, is the highest-rated player to sign with Tech during the tenure of head coach Josh Pastner. Kelly, a 6-5 guard from Lilburn, Ga., is No. 108 according to 247Sports but as high as No. 98 according to Rivals. Moore, a 6-6 forward from Gardendale, Ala., holds a 247Sports ranking of No. 137.

“Our assistant coaches deserve a tremendous amount of credit in how they put this class together under the constraints of Covid-19, not being able to recruit off-campus,” said Pastner. “All three student-athletes fit our culture, and they’re wonderful young men. They’re all 6-5 or taller and long, which gives us the opportunity to defend at a high level. The way the game has evolved, you’ve got to be able to put the ball in the basket, and all three of them can do that. This class allows us to stay in the right direction, develop these players and continue to get old and stay old.”

It is the first time since 2012 that Georgia Tech has signed as many as three players ranked among the nation’s top 150 in the 247Sports ranking. Tech’s 2012 recruiting class included four-star forwards Marcus Georges-Hunt and Robert Carter, Jr., and was rated the nation’s 10th-best. The Jackets had the nation’s 11th-ranked class in 2009, a six-player group highlighted by forward Derrick Favors, the nation’s top-ranked prospect, and guard Mfon Udofia. 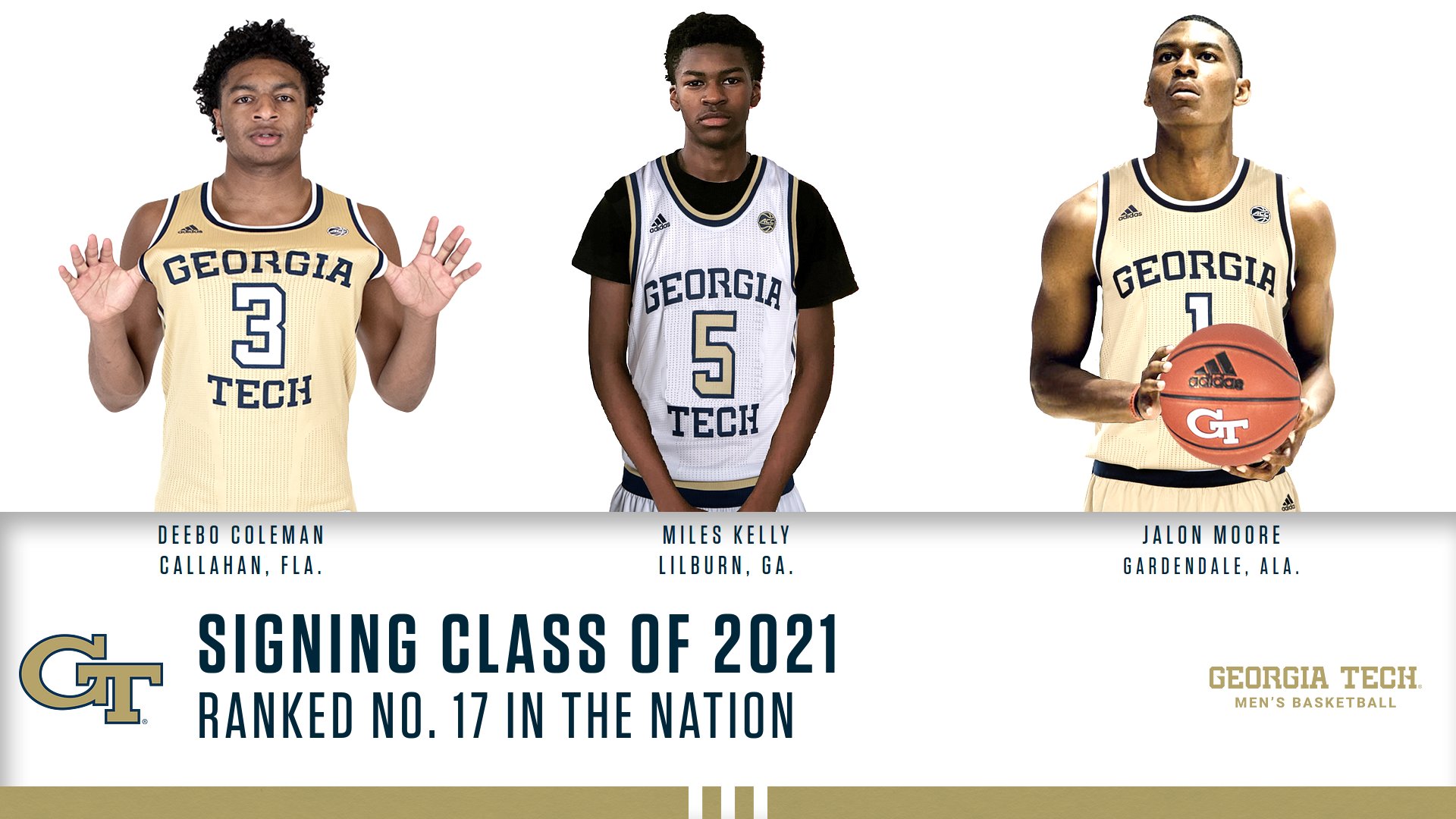 A consensus four-star prospect, Coleman is the highest-rated high school prospect to sign with the Yellow jackets, coming in at No. 49 in the class of 2021 according to the 247Sports Composite rankings. ESPN ranks him No. 34 overall and No. 9 among shooting guards. Coleman picked Tech over Texas Tech and Ole Miss, Florida, Florida State and Louisville were among a number of schools that had offered him a scholarship.

“We’re really excited to get Deebo. He can really score and shoot the ball well, and he’s got great size,” said Pastner. “We’ve had a long-term relationship with him since my time back at Memphis. He’s going to be a really good student-athlete here at Georgia Tech, a good student and a good player.”

“I have a long relationship with those guys going by to my seventh- and eighth-grade year(s),” Coleman told 247Sports. “I feel like I’ve got the best relationship with assistant coach Julian Swartz. We don’t always talk about just basketball. We talk about other stuff, as well. That’s really important. “And just me being on campus a lot. I’ve been to Georgia Tech multiple times – probably four or five times.”

“He’s a skilled scorer and shot-maker with deep range and very good size on the perimeter,” ESPN recruiting analyst Adam Finkelstein said. “He plays with the ball in his hands quite a bit in high school, and while he’s probably more of a wing initially at Georgia Tech, the potential is definitely there for him to play multiple positions down the road.”

A consensus four-star prospect, Kelly is spending his senior year of high school at Hargraves Military Academy in Chatham, Va., after prepping at Parkview High School in Lilburn. The 6-5 sharpshooter is ranked No. 98 overall by Rivals and No. 108 by 247 Sports composite rankings in the class of 2021 and No. 6 among combo guards. He chose the Yellow Jackets over NC State, Miami, Texas A&M and Wake Forest.

“Miles is a wiry kid physically, and he’s wired to score,” said Pastner. “He can create his own shot. He’s long, and he’s another really good shooter. He’s also a good passer off the ball screens. He’s originally from the Atlanta area, but the move to Hargrave Military Academy will benefit him greatly with the regimented environment and the discipline he’ll learn leading into college.”

“It was close to home,” Kelly told the Atlanta Journal-Constitution. “I can stay close to my family and, on top of that, my relationship with the coaching staff and Josh Pastner, that’s what really made my decision.”

“I don’t know if there was a player in American that worked as hard from the day that they said that there was a quarantine,” Emory Walton, Kelly’s AAU coach, told the Atlanta Journal-Constitution. “If somebody worked harder, I want to see it … He worked basketball like a job for the past three or four months.”

A consensus three-star prospect, Moore attends Gardendale High School in Gardendale, Ala., where he earned all-state honors as a junior in 2019-20. The 6-6 forward is ranked No. 131 overall in the 247 composite rankings in the class of 2021 and No. 27 among small forwards. He chose the Yellow Jackets over Georgia and Mississippi State, among others.

“Jalon is another one of these under-the-radar student-athletes,” said Pastner. “He’s an elite athlete, a quick jumper whose best basketball is in front of him. He has a chance to be really good down the road. He’s 6-6, 6-7 and long, and he’s still growing while blossoming into his game. He’ll thrive under our player development program.”

As a junior at Gardendale, Moore averaged more than 20 points and 10 rebounds per game. Moore was a ASWA (Alabama Sports Writers Association) All-State selection and was also named to the Class 6A All-Area 11 team.

“I chose Georgia Tech because as a child I’ve always wanted to play there and as I’ve gotten older it’s become a dream school of mine,” Moore told Rivals.com. “I have a great relationship with the coaches and Georgia Tech has my major. It’s just a good fit for me. I’m just blessed to have this opportunity.”

“His ability to shoot the ball makes him dangerous when he can guard multiple positions like he can,” said his AAU coach, Scott Whittle. “He’s really not even close to where he’s going to be. His development is ongoing and he’s just got a motor that doesn’t quit and a great attitude. He’s got the right DNA for a player that can continue on and do well in the ACC and also move on beyond that at some type of pro level.”