Georgia Tech entered the new year with a 6-7 record against a murderous non-conference schedule, but behind the inspired play of first-team all-ACC performers Matt Harpring and Stephon Marbury and second-teamer Drew Barry, the Rambling Wreck rolled through the ACC slate with a 13-3 mark to claim the first regular-season title in school history.

Tech won its final seven ACC games, including heart-stopping overtime wins over Duke and North Carolina and a dramatic showdown with Wake Forest. The Jackets became the first team to sweep both Duke and UNC since Virginia in 1980-81.

Tech made a run at the tournament title but lost a heart-breaking championship game to Wake Forest. The Jackets fell behind 39-24 at the half and still trailed 71-60 with 2:23 to play but pulled within 71-70 with 52 seconds left before last-second shots by Marbury and Barry were off the mark.

Playing the nation’s toughest schedule, Tech compiled 24-12 overall mark, a Top 10 ranking in the nation’s RPI, a No. 3 seed in the NCAA Southeast Regional, and the school’s third trip to the NCAA Sweet 16 in the last seven years.

The resulting honors were many. 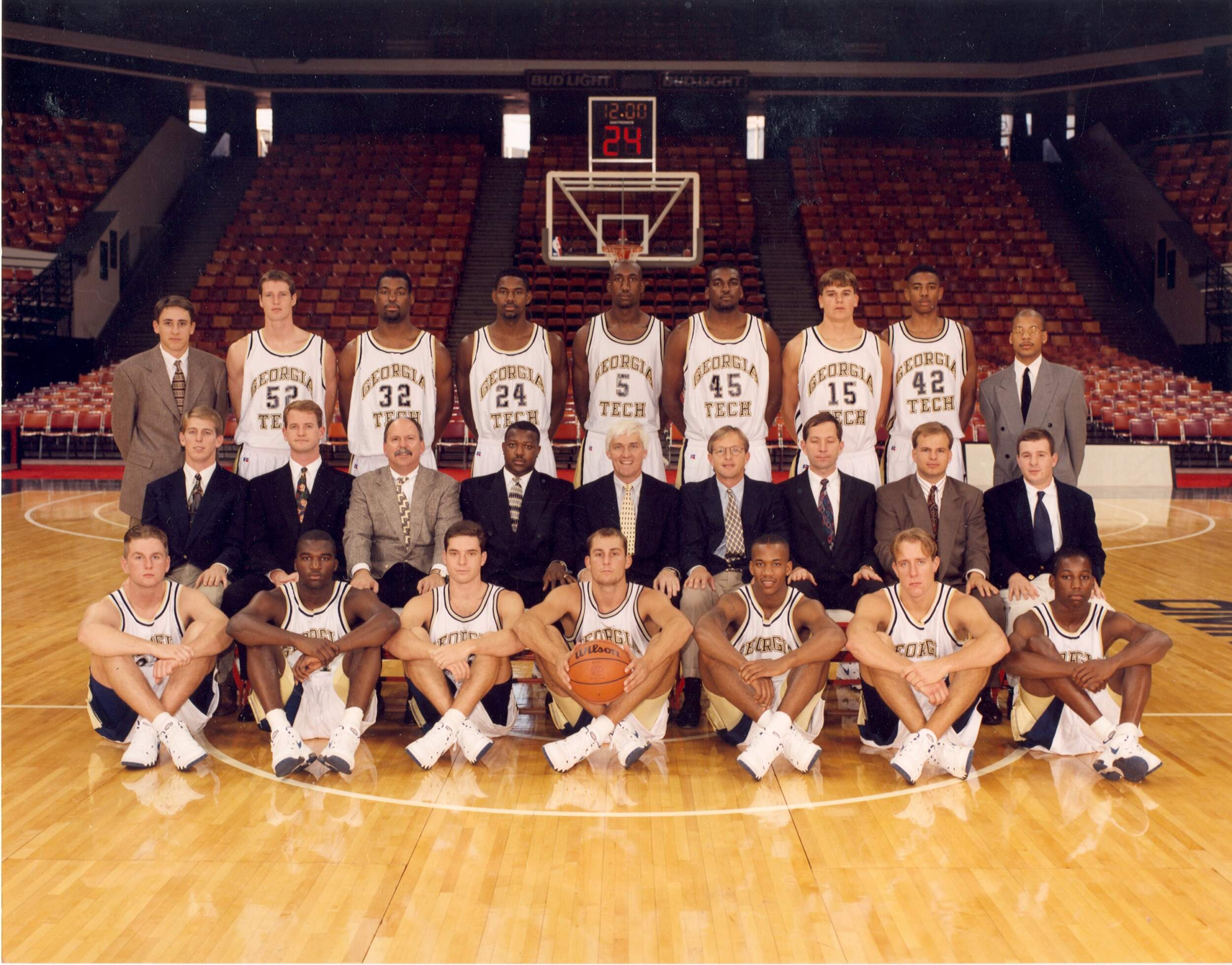 Sophomore forward Matt Harpring, who averaged 18.6 points and a team-high 8.1 rebounds a game, and freshman point guard Stephon Marbury, who led the team with 18.9 points a contest, were both named first-team all-ACC, while senior guard Drew Barry, who averaged 13.5 points and an ACC-leading 6.6 assists a contest, earned second-team all-ACC honors.

Marbury, the mercurial point guard from Brooklyn, N.Y., was named ACC Rookie of the Year, Tech’s eighth Rookie winner in the last 14 years, and Cremins was honored as the ACC Coach of the Year, collecting his third such honor, but his first since 1985.

At the start of January, 1996, this same assortment of weapons, led by Barry, Harpring and Marbury, stumbled home to Atlanta after losing to Bradley and Santa Clara in the Cable Car Classic and extending a four-game losing streak that began with a stunning defeat by Mount St. Mary’s.  The result was a 6-7 record for a team that had yet to play a game in the gauntlet known as the Atlantic Coast Conference.

Tech was in dire straits, and Cremins and his young squad, which featured three sophomores and three freshman among its top eight players, knew it.

Three major events occurred – Nobody left, a senior [Barry] took charge, and a talented freshman [Marbury] sacrificed. The end result was a team of beauty.

Beginning with a 98-84 win over Maryland on Jan. 3, the Jackets gained confidence, poise and chemistry with each successive outing and ripped through the Atlantic Coast Conference with an up-tempo offense featuring the passing of Barry and Marbury, three-point shooting unparalleled in school history, and aggressive defense unseen on the Flats since the days of Mark Price and John Salley. 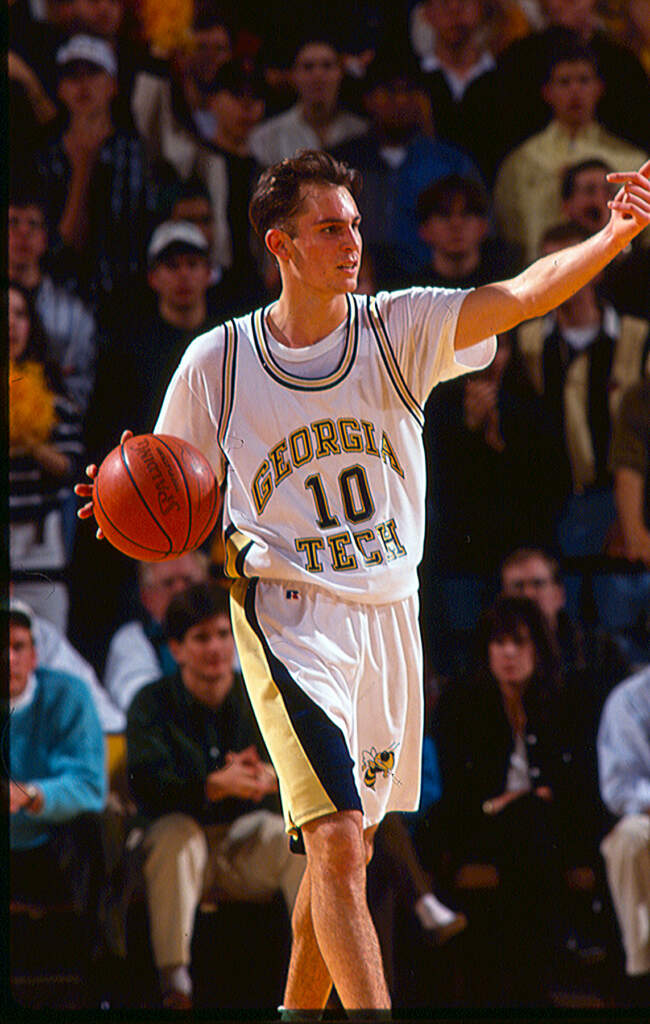 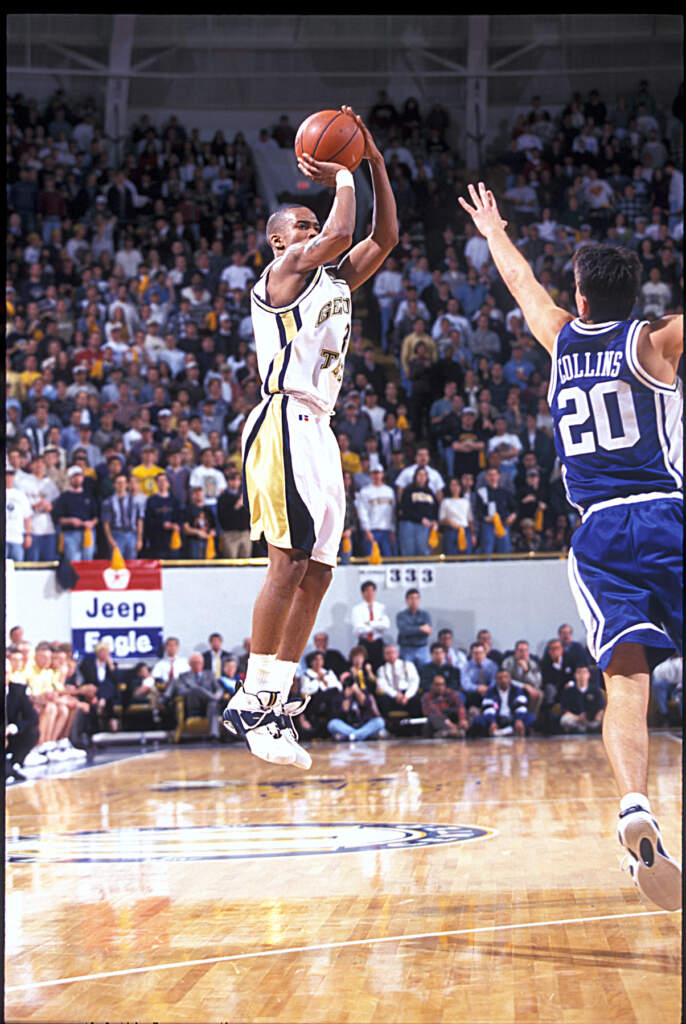 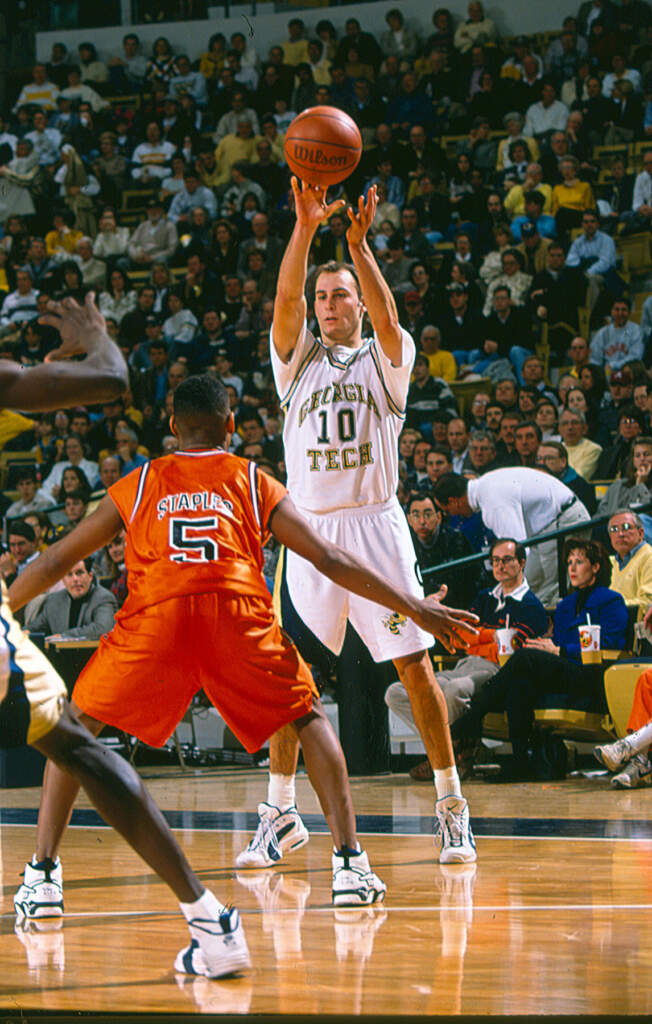 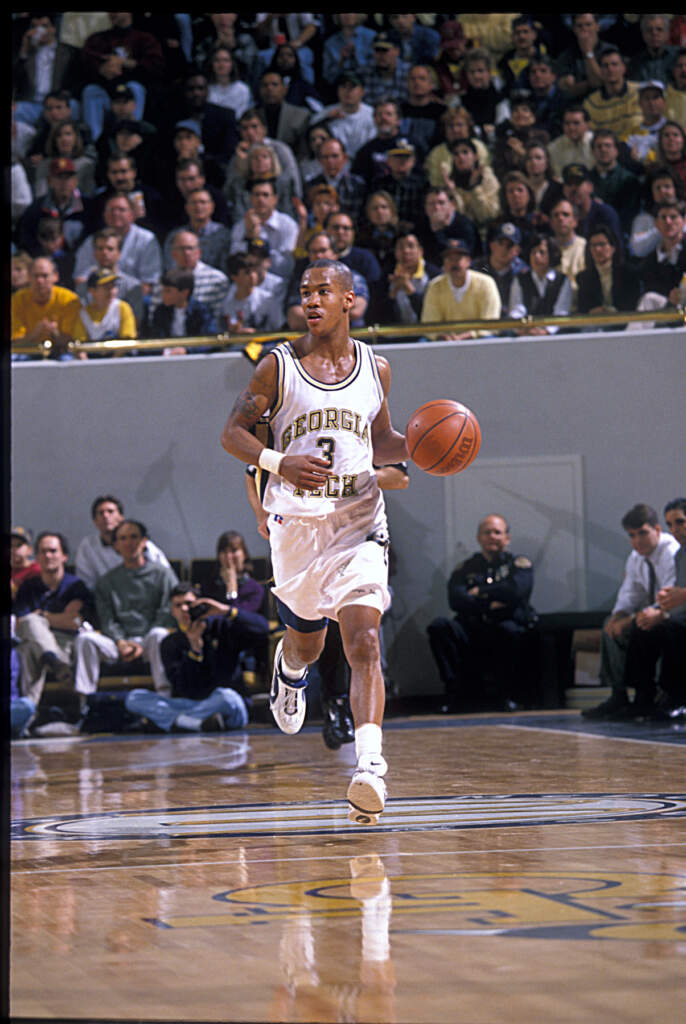 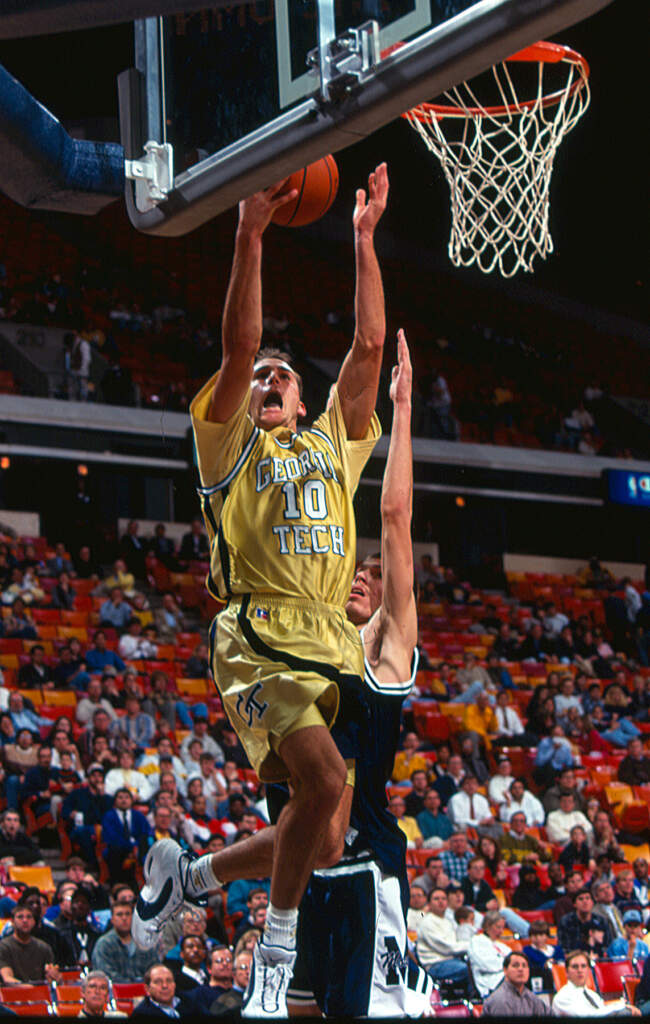 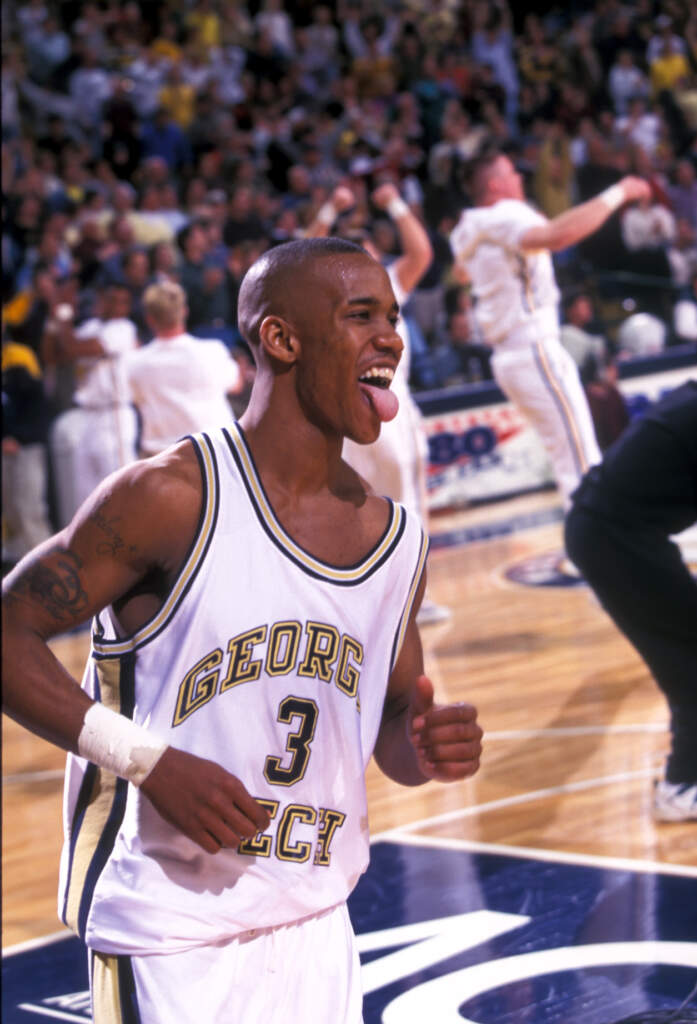 The backcourt chemistry between Drew Barry, a senior, and Stephon Marbury, a freshman, gelled at mid-season and enabled the Yellow Jackets to take off.

Cremins credited the turnaround to his talented backcourt tandem of Barry and Marbury.

“The thing that turned it all around is I told Drew that we needed his leadership,” said Cremins.  “Drew is somebody Stephon looks up to.  One of the reasons Stephon came to Gerogia Tech is he wanted to play with Drew Barry.  He really liked Drew.  He’s our leader.  After that, Stephon changed his game.  He was playing up to the press.  He was playing up to the hype trying to do too much.

“Then he wasn’t shooting.  I said, ‘I didn’t want you to stop shooting.’  Now he’s playing like a complete point guard.”

Following the Yellow Jackets’ heart-breaking loss in the championship game, Tech advanced to the NCAA’s Sweet 16 by defeating Austin Peay State and Boston College in Orlando, Fla., before falling to top seed Cincinnati in Lexington, Ky.