Everyday Champions: From Jackets to Jaguars

On the surface it appears that Georgia Tech football players Nathan Cottrell and Tyler Davis would have very little in common.

Cottrell is from Knoxville, a thriving Southern college town where country music is king, orange is the color of choice and college football – particularly the University of Tennessee — is the only thing that matters. Davis grew up on Long Island, in the shadow of the Big Apple, where professional football dominates the landscape and children are taught early to love either the Giants or the Jets.

Cottrell and Davis didn’t even exchange handshakes for the first time until January 2019, shortly after Geoff Collins was hired as head coach at Georgia Tech. Davis arrived as a graduate transfer from UConn and Cottrell was a fifth-year senior. Despite their geographical and social differences, the two were drawn together by similar traits during their only season together on The Flats. They shared a focus and were willing to push themselves as hard as possible to reach their goal of playing professional football.

While pursuing and completing their Masters degrees, Davis and Cottrell became fast friends, workout buddies and team leaders. Now, despite different career routes, they have reached another milestone. Both will be in training camp with the NFL’s Jacksonville Jaguars.

“I wish I’d know Nate longer because he’s gotten to be one of my best friends at Tech,” Davis said. “Every interview with an NFL team I had, they’d ask, ‘If you could bring one guy to the NFL with you, who would it be?’ I’d say Nate because he played his role and took full advantage of it. I have so much respect for him.”

Their journeys to get to professional football are quite different.

Cottrell eagerly accepted his role as a critical special teams player and embraced his role as one of the organization’s leaders.

Cottrell began getting noticed in high school by scouts because of his speed. He ran the 40-yard dash in 4.35 seconds at a summer camp at Georgia Tech prior to his senior season and wound up getting an offer – and accepting it – that very same day.

“I sat in Coach (Paul) Johnson’s office for like four hours,” he said. “I called everybody I could, my parents, my family, my friends, and talked through the pros and cons, and the pros outweighed the cons by a tremendous amount. I just thought about the longevity of where Georgia Tech can take me in my future outside of football. There is so much opportunity out there. It ended up being a great fit.”

It appeared the Cottrell was going to be perfect for Johnson’s option attack. He was on track to get a load of carries as a freshman when he was injured on the second day of camp and required season-ending knee surgery.

Cottrell returned to play 11 games, primarily on special teams, as a redshirt freshman in 2016. He was part of the regular rotation at A-back in 2017 and 2018 and rushed 79 times for 636 yards and four touchdowns.

When Cottrell got wind that Johnson would be stepping down after the 2018 season, he knew there would be uncertainty at his position. Would he stay and be part of the switch to a new offense – one which not necessarily meant more carries – or exercise his right as a graduate transfer to play at a different school? For Cottrell, it really wasn’t a difficult choice.

“To transfer never really crossed my mind,” he said. “I was really excited to get a blank slate and start all over again. I was excited for that. Coach Collins brought all of us seniors into his office and laid the groundwork of what he expected and what he wanted moving forward, and I never looked back.”

Cottrell quickly learned that his role would be different. He wasn’t going to be the team’s primary ball carrier, as he might have hoped. But he eagerly accepted his role as a critical special teams player and embraced his role as one of the organization’s leaders.

“I was sitting there thinking, ‘What’s the best thing I could do to help us out?’ and that’s by being a great teammate for the rest of the guys,” Cottrell said. “Whether that was filling water bottles or doing whatever Coach Collins wanted doing, I was going to do it.”

He went at it hard. As far as game contributions, Cottrell became a gunner-extraordinaire on special teams. His speed enabled him to get downfield quickly to nail the opponent’s punt returner – often arriving when one of Pressley Harvin’s punts were still in the air. He had six solo tackles and three assists on kick coverage. His effort and skills on special teams helped eventually seal his free-agent deal with Jacksonville.

Tyler Davis is the first tight end to be drafted out of the Tech program since Tom Covington went in the 11th round to San Francisco in 1992.

Unlike Cottrell – who had been around campus for four years — Davis was brand new. He was the first new face to join the program after Collins was hired. It turned out to be a perfect match: Collins needed to find an experienced tight end for a program that hadn’t needed one for 11 years and Davis was looking for the sort of coaching that would help him get to the NFL.

“I had played against Coach Collins at his previous school (Temple), and I knew exactly what his teams were all about,” Davis said. “I knew they were tough, physical, hard-working programs. When I was transferring and saw he was going to be the head coach here, I knew I wanted to be a part of a program that teaches you those principles. It was a no brainer.”

None of the returning Georgia Tech players knew Davis when he arrived on campus, but he quickly earned their trust and respect with his work ethic. It took almost no time for Davis to be recognized as one of the team’s leaders, a pattern that carried into the season and culminated with his selection – along with Cottrell’s – as one of the team’s permanent captains.

“I knew I wanted to be a part of that leadership aspect of the program,” Davis said. “That’s my purpose in this life, is to lead.”

Davis made plenty of on-field contributions, too. He ranked third on the team with 17 receptions for 148 yards and one touchdown, that coming in the season finale against rival Georgia.

To help Davis prepare for the NFL, the staff assembled a 20-page package of information that detailed the facts and figures of each tight end drafted by an NFL team over the last decade. The information helped Davis pinpoint the areas in which he needed improvement and he zealously attacked the plan and watched it work.

Davis also struck an immediate bond with strength and conditioning coach Lewis Caralla because of their relationship with current Notre Dame strength coach Matt Balis. Davis had trained for two seasons at UConn under Balis and Caralla had served as a graduate assistant under Balis at Mississippi State.

“I remember when Coach Lew was interviewing us to learn more about us and how he could help us, he found out I had been trained by Coach Balis, he came over and hugged me,” Davis said. Caralla recognized immediately that he would receive only optimal effort from Davis. 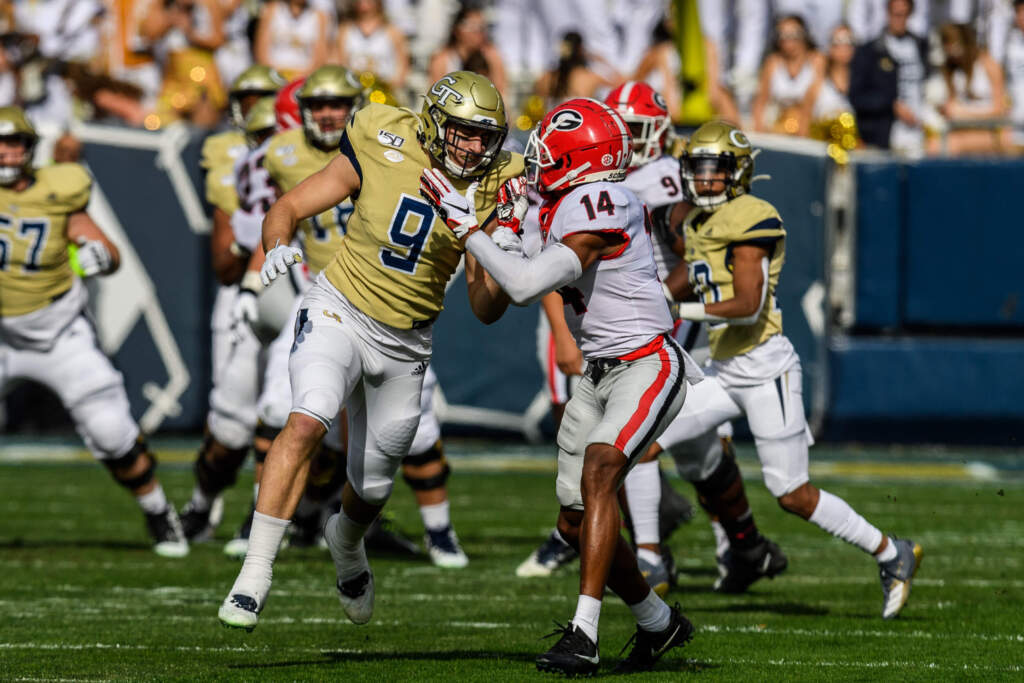 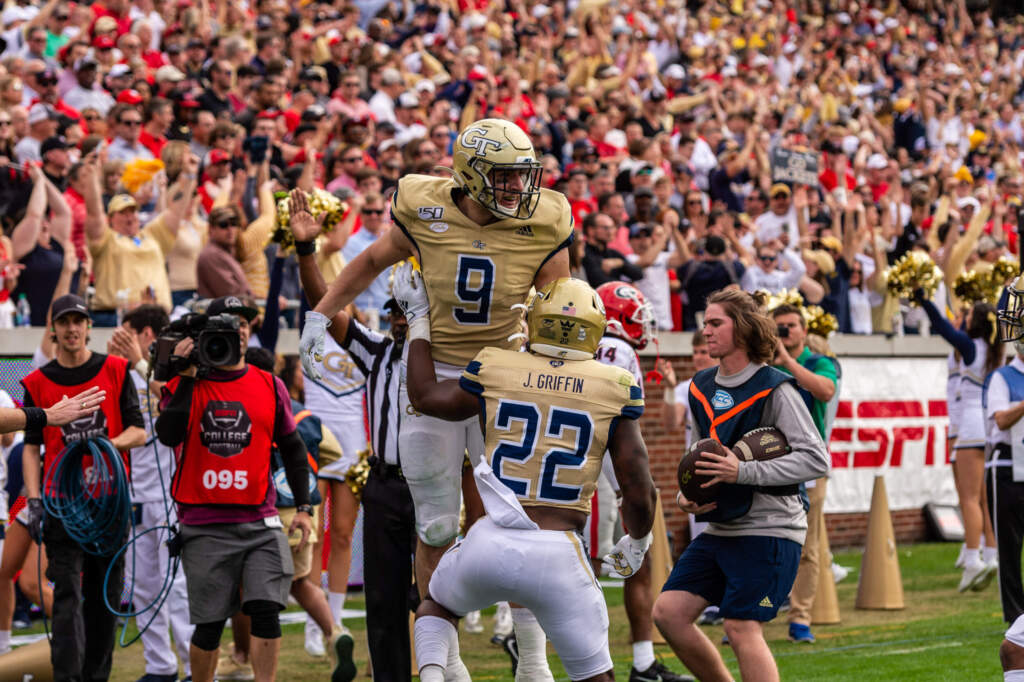 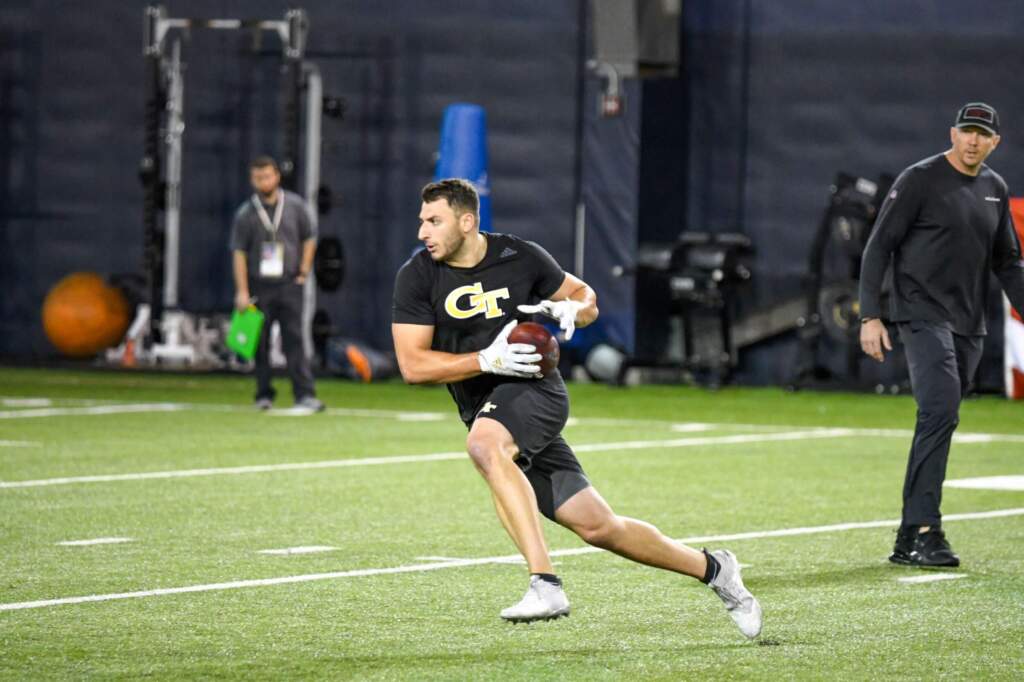 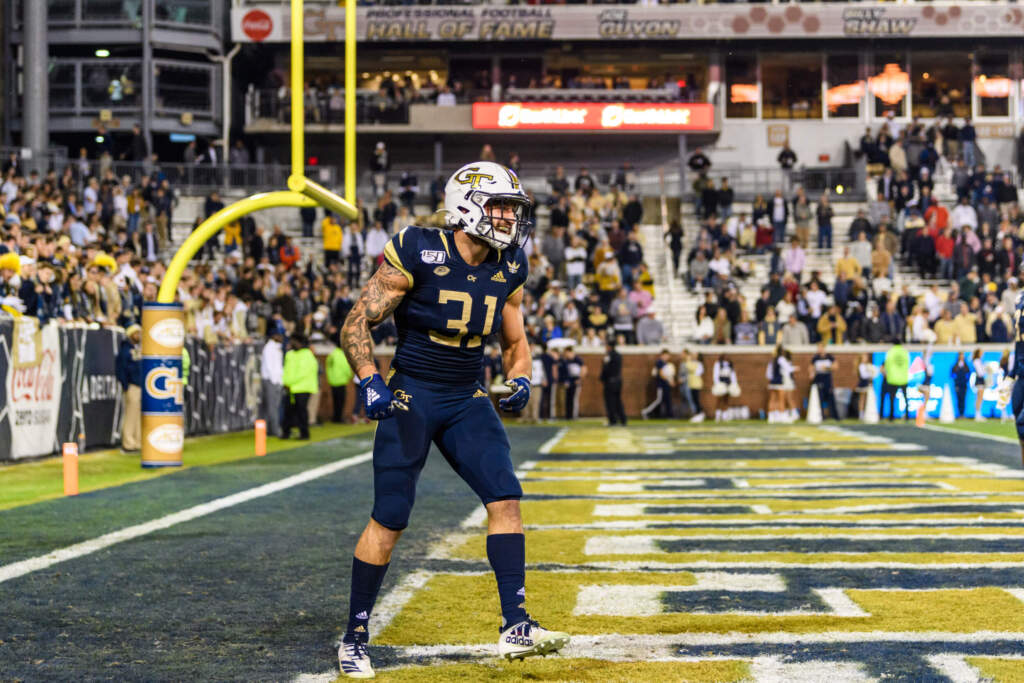 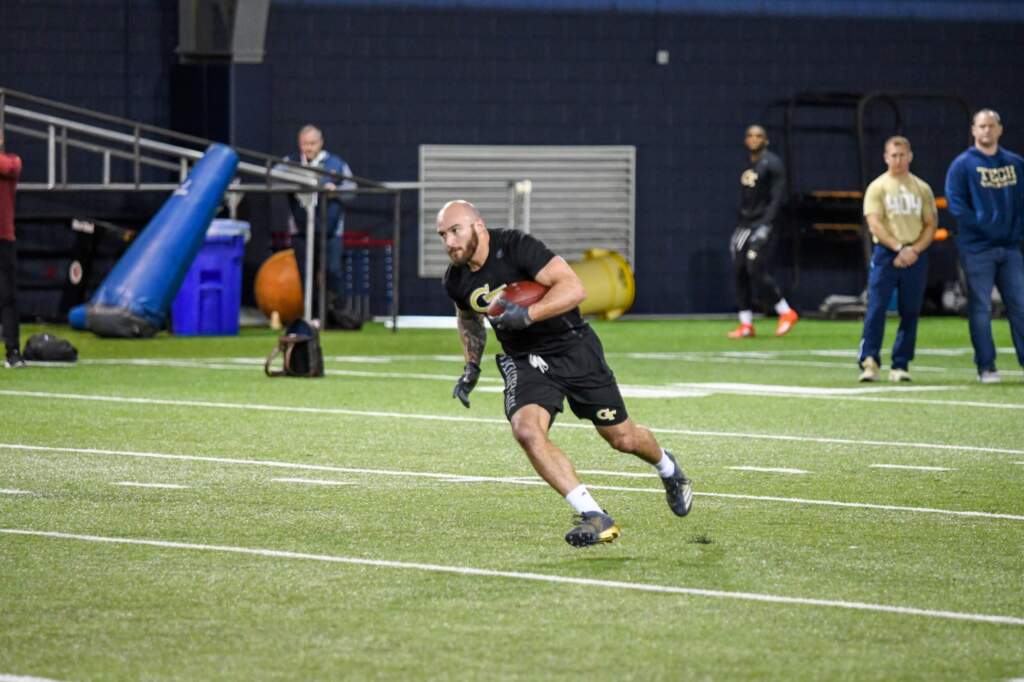 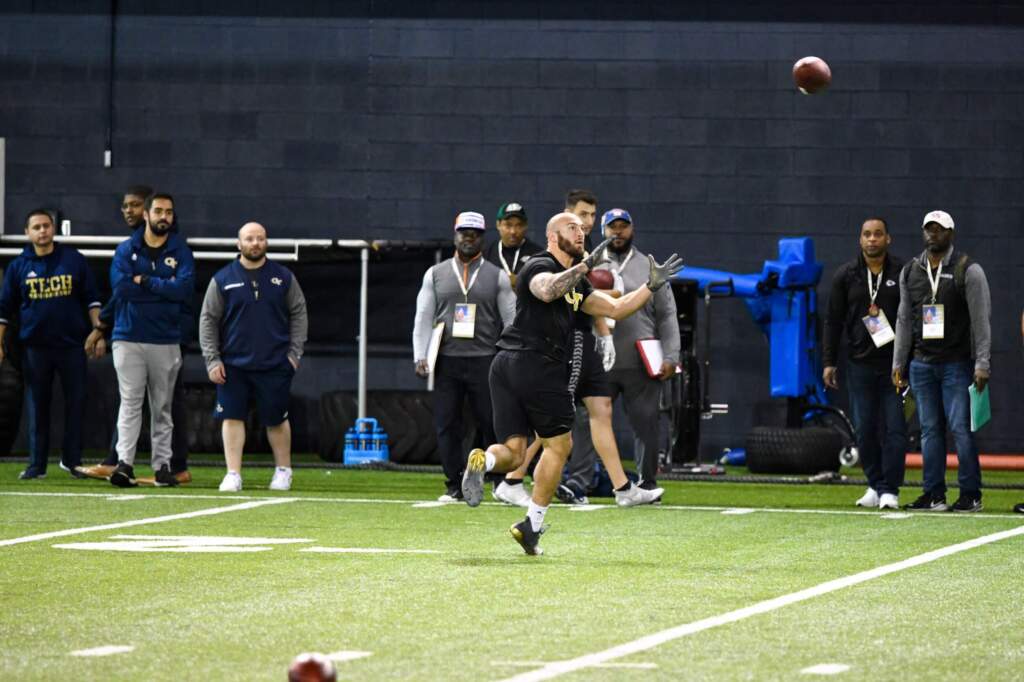 By the time Georgia Tech held its Pro Day, it was obvious that Davis had taken advantage of his opportunity. He was timed in 4.65 seconds in the 40, as good as most tight ends in the NFL. His strength numbers soared; Davis was able to complete 25 repetitions in the 225-pound bench press, eight more than he recorded when arriving a year earlier.

“I was pretty much at all the goals I’d set or better,” he said.

Cottrell’s workout numbers were off the chart, too. The high-tech Catapult tracking device that players wear during practice measures variables such as velocity, acceleration and distance covered. The staff quickly noticed that Cottrell’s numbers were higher than anyone’s. His intensity and effort were obvious to the naked eye and confirmed by the computer metrics.

“It almost started to become a game,” Cottrell said. “There’s an awareness that the coaches watching everything, and I’m not going to slack off now. The numbers were what they were, but it definitely helped push me more.”

His Pro Day statistics were strong. Cottrell did 18 reps on the 225-pound bench press and his 40 time was 4.38. He was contacted by several teams and knew there was a good chance he would be joining the Jaguars should he not be selected in the draft.

The significance of playing professional football for the same team is not lost on either. Davis was drafted in the sixth round and Cottrell was signed as a free agent.

“It’s a dream come true,” Davis said. “And it just goes to show that no matter how many people tell you it can’t be done, that anything is possible if you give 100 percent. It’s definitely rewarding to know all the hard work paid off.”

On the night of the NFL draft, Davis said he received around 400 congratulatory text messages.  In the middle of returning those messages, he learned that Cottrell had also signed with the Jags. Davis stopped everything and reached out to congratulate his friend. Now their friendship will continue at the professional level.

“We will definitely keep each other accountable, look out for each other, study together,” Cottrell said. “Just make sure we’re doing whatever we can do to give ourselves the best chance.”