Everyday Champions: Big B Lives On

Big B Lives On

It may be hard to believe that it has been a full year since the tragic death of Brandon Adams, and it’s no less amazing how quickly fellow Georgia Tech student-athletes to hatch a plan to honor the late defensive tackle and business administration major.

One year ago today, we lost Big B.

There aren’t enough words to describe the impact he’s made in both life and death. We miss him every day, and we hope his friends, family and teammates find comfort in his lasting legacy. #LLBB 9️⃣0️⃣

Actually, there are multiple timelines behind Victoria Flores’ idea for last fall’s “Big B” Clothing Drive, which fetched hundreds of wearable items to be donated to homeless people not far from campus. A couple of those timelines were remarkably quick. One in the middle took longer.

Let’s move chronologically through a tale that weaves Georgia Tech student-athletes together with each other, their Institute and the world around them all. 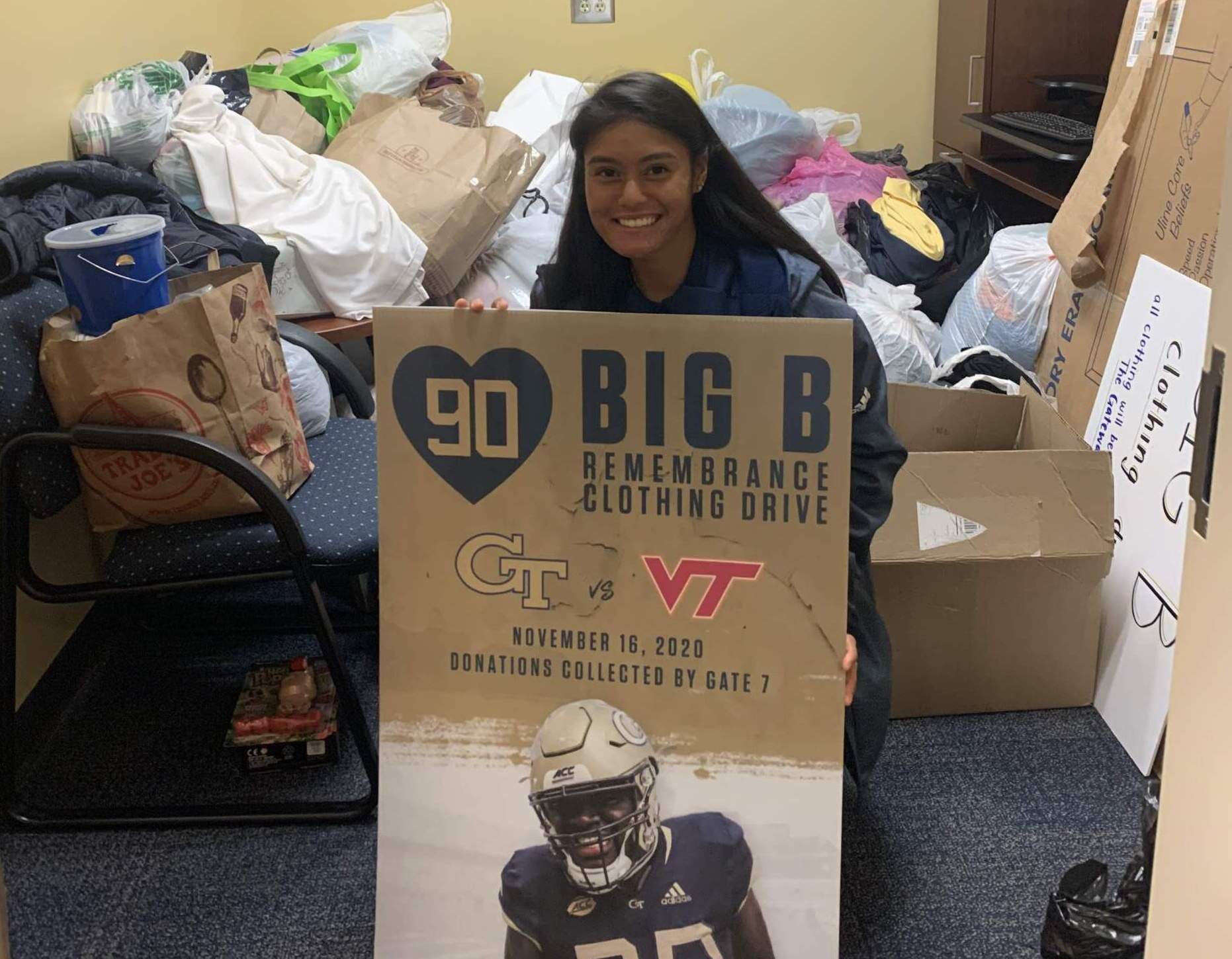 Women’s tennis student-athlete Victoria Flores spearheaded the efforts for the inaugural Big B Clothing Drive, in memory of her friend Brandon Adams.

First, there was that day in the fall of 2017, when the diminutive Flores first met a much larger human in the parking garage of their apartment complex at the corner of North Avenue.

Hours earlier, a sophomore from Brentwood, Tenn., played for Tech in a college football game, which Flores – surely one of the biggest fans of Tech athletics even beyond the tennis that she plays for the Yellow Jackets – had attended. In her first couple months on The Flats, the freshman from Fort Dodge, Iowa, had learned of “Big B,” a smiler similar to her.

Then, he was there.

“I was just putting clothes in my trunk to donate to a homeless shelter nearby, and he just happened to see me and said, ‘Where are you going? What are you doing? I don’t want you to go alone,’” Flores recalls. “So, he volunteered to go with me, and we went to Gateway Center (on Pryor Street) . . .

“It was like really instant. I always heard about him. I’m very friendly; I always hug people the first time I meet them, and he hugged me. He was so friendly, and I could tell it was very genuine.”

Flores continued donating clothing to Gateway Center, which is located a few blocks west of the state capitol building near downtown. Gateway Center provides access to critical services and housing for the homeless, basic needs such as showers and clothing, shelter and access to health care and employment resources.

On March 23, 2019, Adams collapsed while resting in the midst of practicing step-dancing in a fraternity activity, and passed away shortly afterward. His loss was keenly felt not only within his football team, but in the Georgia Tech student-athlete community at-large.

“He was friends with everybody. That’s why we re-named our award at our year-end Yellow Jacket Celebration after him,” said Leah Thomas, who is Tech’s assistant athletics director for student-athlete development.

Having been at Tech since 2003, Thomas supervises Tech’s Total Person Program, which among other things, organizes community service projects for student-athletes. She also serves as the advisor to the Student-Athlete Advisory Board.

She added, “It’s kind of our Unsung Hero award, but it’s more like somebody who is everybody’s friend. (Victoria) won it last year.”

And that was before Flores’ epiphany about Adams.

It took time to process his passing. Her vision was not immediate.

Until it suddenly became instant back in September, when she went to make another donation at Gateway Center. Flores recalled that very first trip, with Adams.

“I was so scared to go, because I’d never been there without him … he would go with me once a semester. So I had like this lightbulb moment where I was inspired by Brandon. ‘Oh my God, we can call it the Big B Clothing Drive, and we can have all the donations go to Gateway Center.’”

Flores went quickly to Thomas, who arrived at Tech almost two decades ago, but shortly after the beginning of the Michael Isenhour Toy Drive, a holiday-season tradition created to honor the death of the former Jackets’ basketball player from leukemia in 2002. It’s not difficult to find online pictures of Flores, her teammates and multiple Tech student-athletes participating in that.

Thomas’ experience helped make Flores’ vision a reality. She helped set up logistics like the primary collection points on Callaway Plaza before the Nov. 16 football game against Virginia Tech. The event – which all parties intend to make an annual happening – was conducted under the umbrella of the Georgia Tech Student-Athlete Advisory Board. 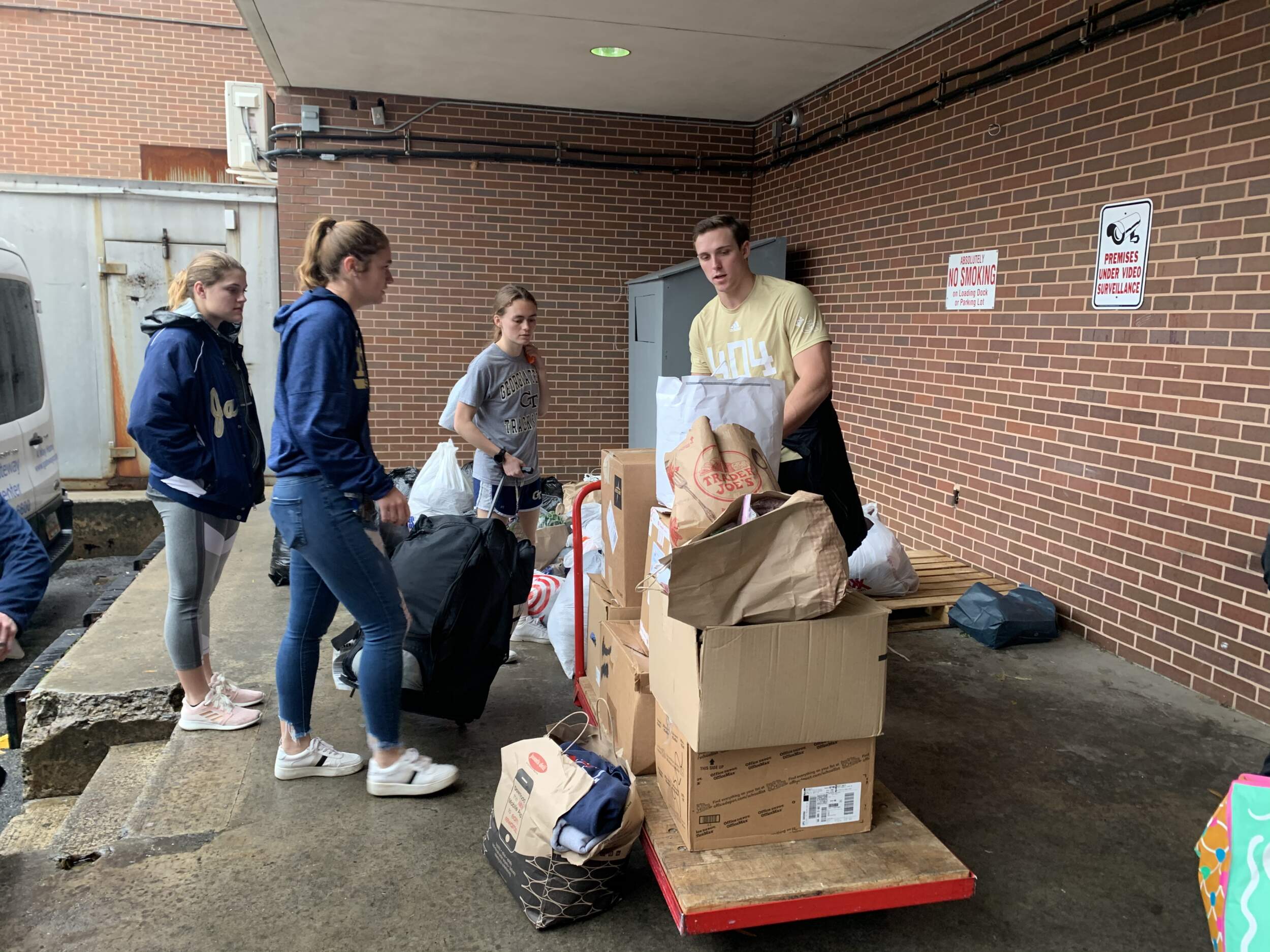 Recent graduate Tyler Cooksey wasn’t able to help collect that day. He had a football game to play. As a member of the Student-Athlete Advisory Board, he was involved about a week later when roughly two dozen student-athletes transported hundreds of items of clothing to Gateway Center.

“I definitely wanted to help distribute the clothes,” says Cooksey, who is now in the work force at the Trammell Crow real estate company. “We’ve got to pull our weight. I hope that we just do what comes out of our hearts. Just do what Jesus would do.”

The inaugural Big B Clothing Drive was a tremendous success. Flores says much of the donated clothing was brand new rather than “gently used” as the fliers ahead of time sought.

Otsuka remembers moving garments from the Ken Byers Tennis Complex to Callaway Plaza on the day of the drive, trudging down Brittain Drive.

“There were like five bags here, and I pushed it to the football stadium, and that was quite a struggle,” she said. “It was like a laundry cart. I was a little bit late, but I made it.”

This was a collective effort. Flores says, “Every single team helped. It was awesome.”

Thomas and Reid Ferrin, Tech’s Total Person Program coordinator, helped organize a joint effort, yet “Vicki deserves a ton of credit, because it was her initiative. It always has been, and in the past year-and-a-half, she has had a passion for collection of clothes, particularly for Gateway Center,” Thomas says. “She was pretty impacted, as we all were, by (Adams’) death, and she’s come a long way in healing.”

“I like it, because they have clients, and they help people rebuild their lives,” she says. “They have them housed there. They get the treatment they need, like mental health [services]. They get financial literacy, they learn how to take care of themselves, how to find a job, how to find a place, how to re-start their lives,” Flores says.

“When I had the idea, I knew it right then and there that I was going to do it, and whenever student-athletes have an idea like that in terms of volunteering or anything like that, they go to Leah. She’s like the MVP of GT Athletics. She’s the most supportive person. She was like, ‘Let’s get on it.’” 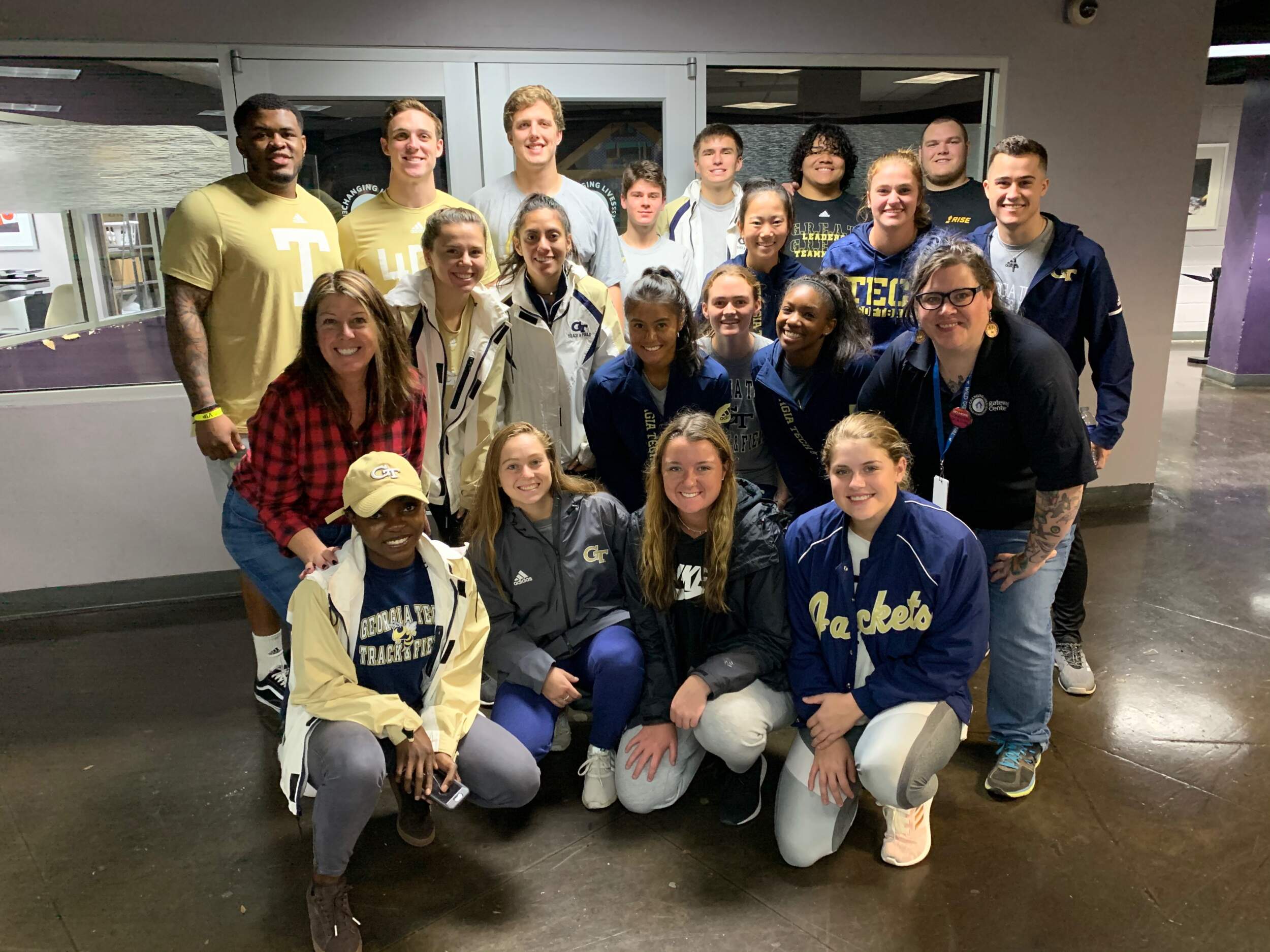