Brian Oliver, the basketball player, was a lethal weapon on three continents.

Thirty years have passed since Oliver and the other members of “Lethal Weapon 3” spearheaded the Yellow Jackets’ run to the 1990 Final Four. During that span, Oliver has excelled at two professions he learned while a Georgia Tech student-athlete.

His basketball career included stints in the NBA and in overseas pro leagues in Israel, Greece and, most notably, Italy. Since hanging up his high-tops in 2007, he’s become an accomplished construction manager back in his hometown of Atlanta, leveraging his degree in building construction.

Oliver recently shared his insights on his past, present and future with Everyday Champions.

Everyday Champion: Georgia Tech basketball lore is pretty star-studded, and you are part of a trio — Lethal Weapon 3 with Dennis Scott and Kenny Anderson — that tops that history. As one of the nation’s top players coming out of high school in 1986, did you envision being one of the guys that gave Georgia Tech national notoriety?

Oliver: “When I was a teenager, Bobby Cremins was building it up. I remember the team that had Mark Price, John Salley and Bruce Dalrymple — they were the trio that put Georgia Tech on the map. If it wasn’t for Mark, Bruce and John, Georgia Tech would not have been the desirable place it quickly became. But for me at that age, basketball was simply a tool to help get me to college. Yes, I was the Georgia high school player of the year and a McDonald’s All-American, but my dream was to be an architect, not a pro basketball player. I spent much of my childhood in Chicago before my family moved to Atlanta, and I just loved the Chicago skyline. I wanted to be a part of the teams that created those buildings. I went to college with the mindset of being a true student-athlete, emphasis on the student. For all the honors I received, the two I am most proud of were being named Academic All-Atlantic Coast Conference and receiving the Georgia Tech Total Person award.”

EC: Yet you also were one of the finest basketball players to ever pass through The Flats and will forever be remembered for the “Lethal Weapon 3” season and Final Four run. At what point did you get an inkling that 1990 team could be special?

Oliver: “The summers back then, Georgia Tech was a hotspot for pickup runs. We always played in the old freshman gym (O’Keefe) and there was no air conditioning, but all these NBA players would come in. Doc Rivers. Ron Harper. Kevin Willis. A lot of former college players and guys who were playing overseas. There’d be 20 or 30 guys there, and if you won, you stayed on the court. Kenny Anderson moves to Atlanta that summer before his freshman year, and he, Dennis and I are always playing on the same team in those runs. And we’re winning. We’re not just holding our own, we are dominating many of those games. That was kind of the beginning that let us know we had something special.”

EC: What do you remember most from that Final Four season?

Oliver: “The ‘What ifs …’ still haunt me. In November of 1989, I was diagnosed with a stress fracture in my left ankle. In this day and age, guys would look at trying to redshirt. But I’m a tough-as-nails kind of guy — stubborn — so I opted to play. I had a great season playing through it, but we get to the ACC Tournament championship game, and I reinjured my ankle late in the game. I can barely put any weight on it. But I wasn’t about to let my teammates down, so I hobbled out there and finished the game. But then with the NCAA tournament starting less than a week later, I was unable to get enough time to rest and recover.” 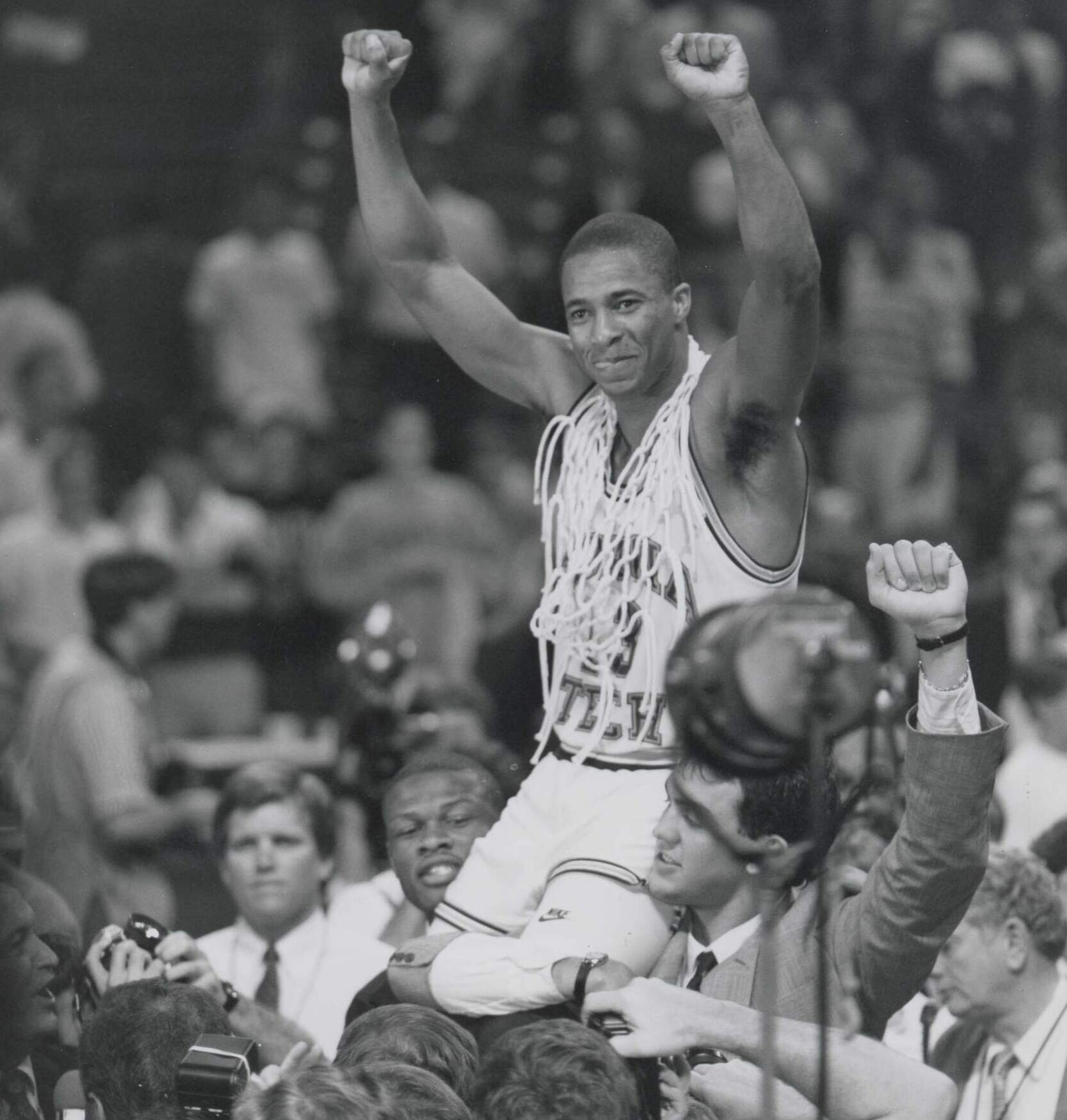 Oliver led Georgia Tech to an ACC title and a berth in the NCAA Final Four as a senior in 1990.

EC: Even so, Georgia Tech gets to the Final Four and loses to arguably the greatest team in history, UNLV.

Oliver: “Again, that’s hard. I’m not anywhere near my best, and we’re up seven points when Kenny gets in foul trouble and has to go out. We lose our lead. People talk about our place in Georgia Tech lore. Think about where we could have potentially ended up had Kenny not gotten in foul trouble or if I’d been 100 percent.”

EC: Your ankle eventually does heal and you go on to a long professional playing career, starting in the NBA but largely overseas. How would you best describe that experience? Was it frustrating to never get established as an NBA regular or did you find playing overseas rewarding enough in its own right?

Oliver: “Let’s put it this way — I have zero regrets. It really started with the NBA lockout in 1995. I knew plenty of guys who were playing overseas, and I figured I’d go over and play and stay on top of my game until the lockout ended. My first gig was with a team in Israel, in a city just outside of Tel Aviv, and being immersed in another culture, but one where most of the locals speak English, it was amazing. The team was good, and I had a great season. When the lockout ends and I come back home and things aren’t going quite my way with the NBA, I don’t hesitate to look overseas again. I ended up playing with a team in Italy and then in Greece and then back to Italy. I meet my wife in Italy and end up having a long career there with a lot of financial success. So when I look back at my basketball career, I have no regrets whatsoever.”

EC: You are married to an Italian? What’s the backstory there?

Oliver: “I always let people down with this story. They want to hear something romantic, about how I was riding on the beach on a white horse with my hair flowing behind me and came across the woman who would be my wife who was there sunbathing in a secluded cove. In reality, I came back to the hotel from practice one day and saw this woman coming out of the university building next door where she was studying political science. I am very well-smitten and taken with her. I’m dressed like a basketball player — T-shirt, baggy basketball shorts, baseball cap turned backwards on my head. I go up to her and introduce myself and give it my best shot. She stops me instantly and tells me she’s not interested in buying anything. She’s mistaken me for a Moroccan street vendor, of which there are many. You don’t see many African-Americans roaming the streets of Sicily. But I convince her I’m not a street vendor and she agrees to spend some time with me. The rest is history.” 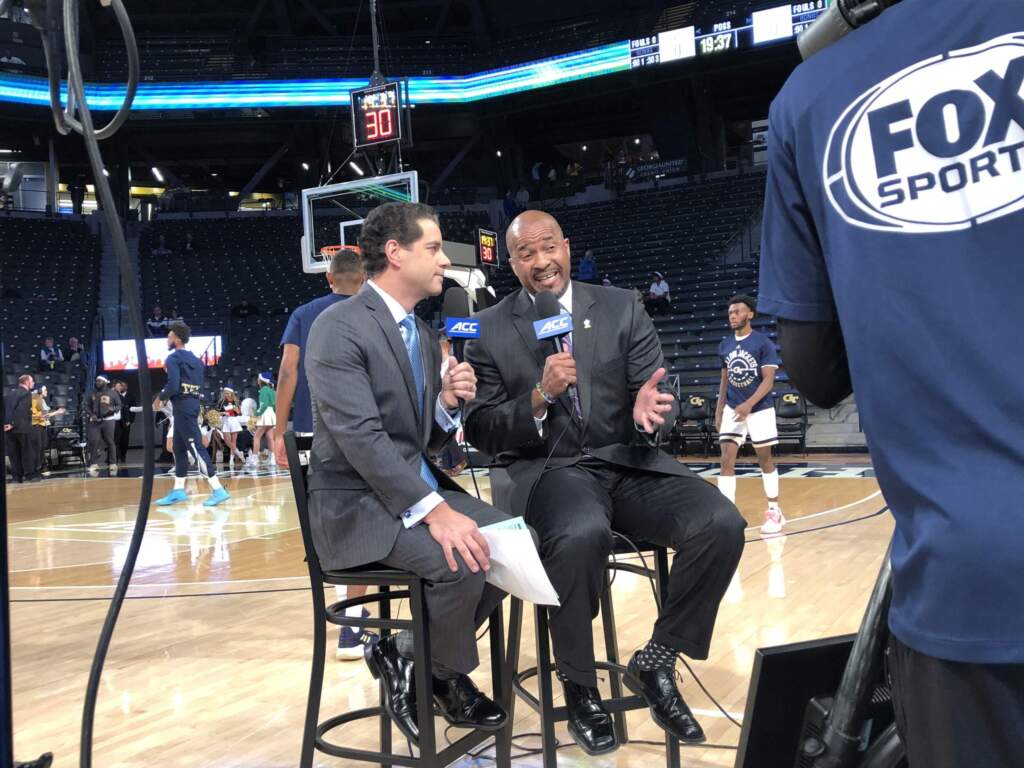 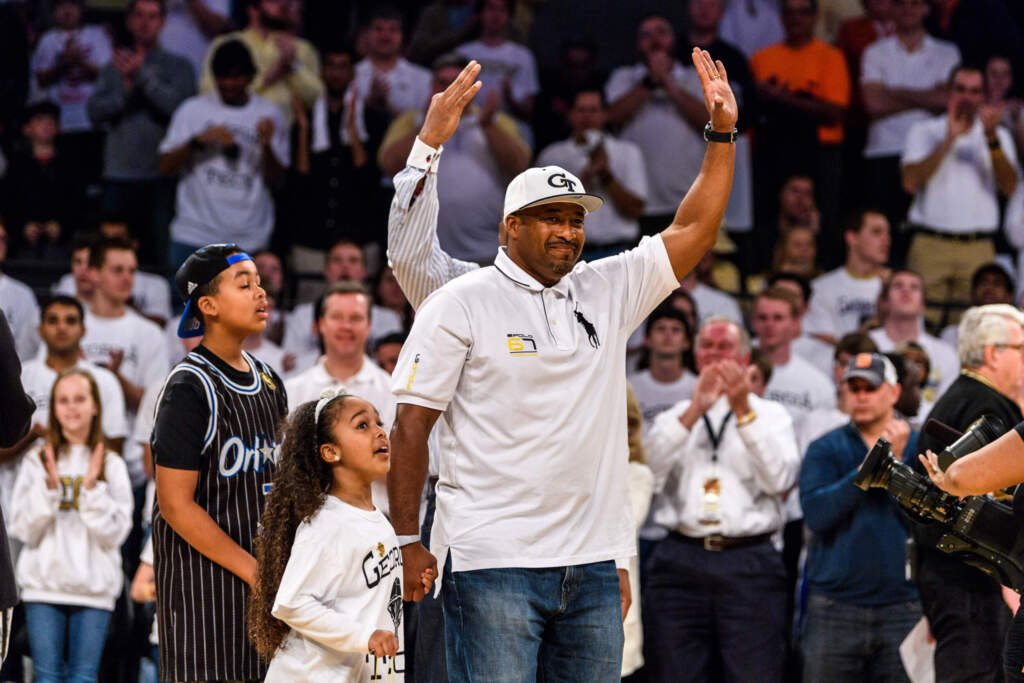 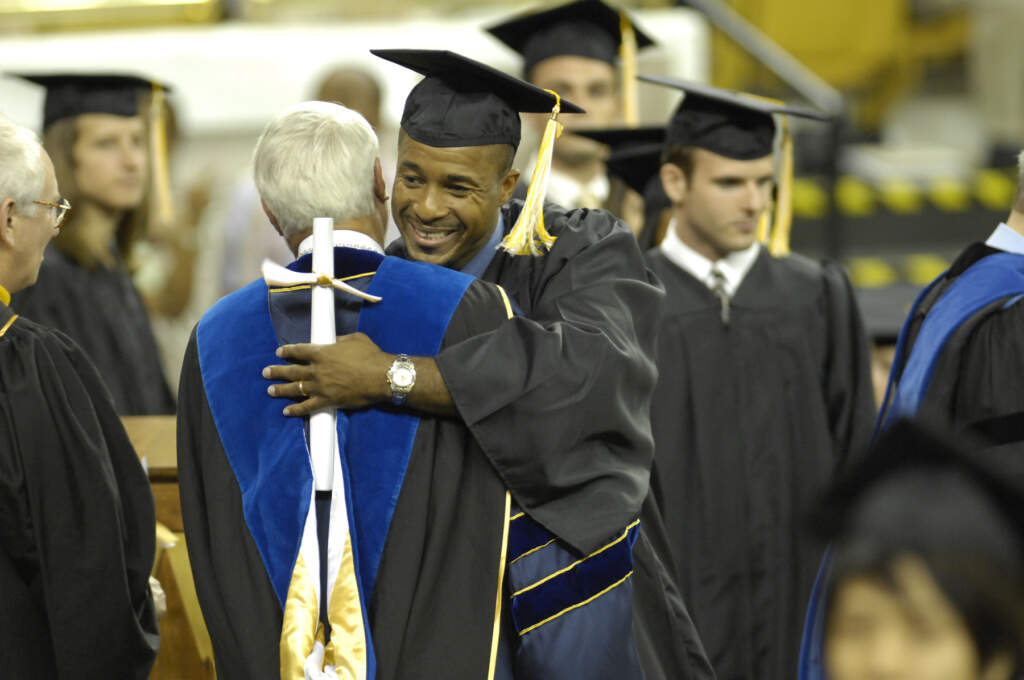 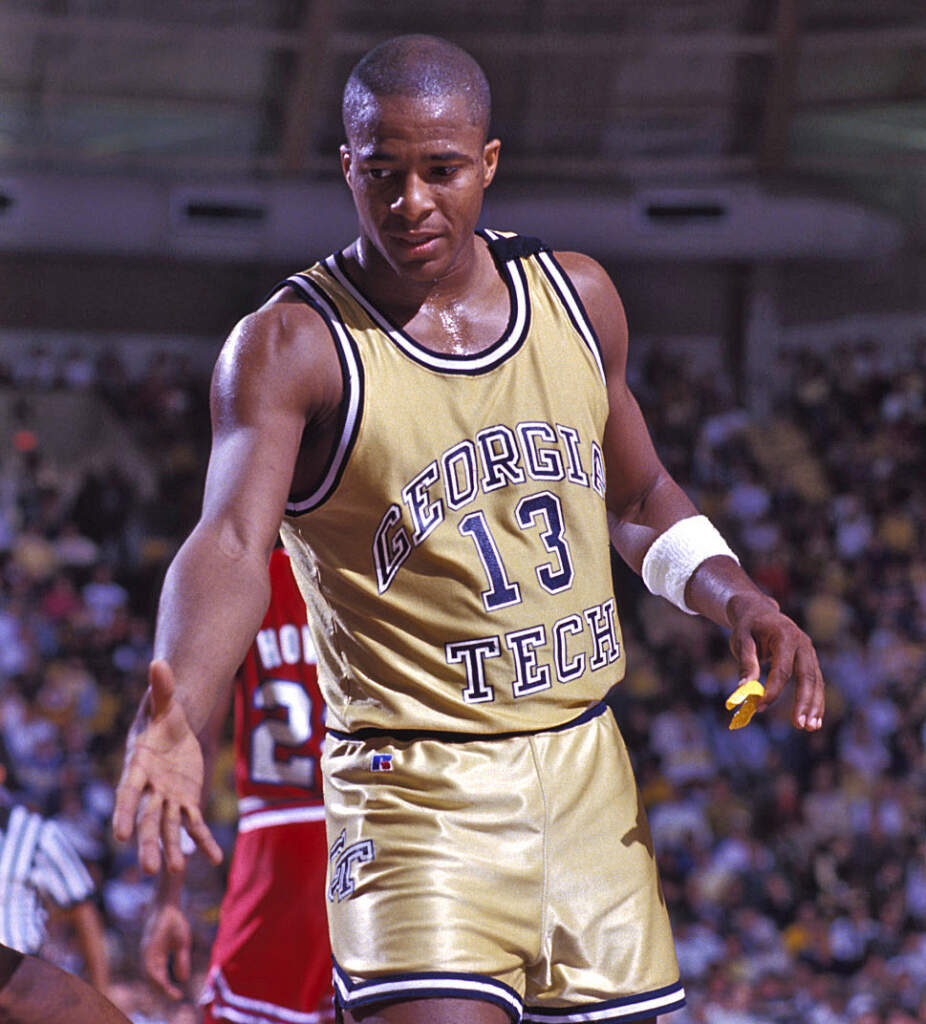 EC: How do you go from European basketball star, with a wife from Italy, to a construction project manager back in Atlanta?

Oliver: “We lived here in the U.S. during the offseason and one day, just before I’m due to sign a contract and head back over for a new season, my wife tells me she doesn’t want to go over anymore, that she wants to stay home here. One of the things my parents have always emphasized is quality of life. We were happy and financially secure — I didn’t need to continue to play basketball. So I told her, ‘Let me try construction. And at the end of the year, let’s revisit this. And if it’s not what I want, then we’ll figure something else out.’ I got in touch with an old friend, Niles Bolton, who I’d interned with while in college and who I’d long talked to about what my next steps would be after I decided to stop playing. He invited me along for a meet-and-greet networking event put on by DPR Construction here in Atlanta. I ended up getting on with them and have moved through the ranks since.”

EC: You are now a senior project manager. What was the career path like?

Oliver: “The one thing I guarded against from the start was I didn’t want anyone to hire me as a showpiece, as a former Georgia Tech basketball star who they could put in business development to help woo clients. I wanted to be involved with my passion. They gave me the opportunity to learn the business and to build on the leadership skills I had developed during my basketball career. I went from project engineer to senior project engineer to project manager to senior project manager. My favorite thing to hear from a client is, ‘Hey, I had no idea you were that Brian Oliver, the one who played basketball at Tech,’ because that means they look at me as being the project manager and respect me for the job I do.”

EC: You’ve also become a father in this post-playing days second act. Tell us about 10-year-old Hayden and whether the Tech faithful can look forward to another Oliver in a Yellow Jacket uniform some day?

Oliver: “I promised myself I would not be one of those ex-professional athletes who push their children into basketball. I wanted to keep my little girl active. She started out running track at the age of five. And two years ago, she goes to my wife and says, ‘Mommy, I want to play basketball.’ So we enter her into a rec league and she’s playing and she comes to me and says, ‘Daddy, will you train me?’ More than that, she said, ‘Will you to push me to be phenomenal?’ Fast forward to this past winter and she’s a fourth grader playing on the sixth grade team and has a really good season. I’m going to say that if she continues to progress, and learns to love the game and puts in the work, pretty soon someone instead of saying to her ‘Brian Oliver is your dad?’ they will probably be asking me ‘Hayden Oliver is your daughter?’ She has a chance to be really good.”