#BestofGT:  In perhaps the most key development of Georgia Tech’s season, Jose Alvarado returned from a six-game absence due to an ankle injury, helping the Yellow Jackets to a third-place finish at the Diamond Head Classic and begin a second-half surge against a murderer’s row of Florida State, Duke and North Carolina.

Jose Alvarado was not particularly happy late Wednesday night, yet in a way he articulated a good feeling after helping Georgia Tech show fans that they might have reason to smile.

One just needs to add what happened in McCamish Pavilion to Tech’s body of work since the junior point guard returned from a sprained ankle to feel better about the Yellow Jackets.

Tech has been boldly competitive since Alvarado’s six-game absence ended a couple weeks ago, when they went 2-1 in the Diamond Head Classic in Honolulu, Hawai’i.

Even in a 73-64 loss Wednesday to No. 2 Duke, in a game that every right-sighted fan in the sellout crowd of 8,600 would tell you was tighter than the final score, it was clear that Tech is better off with Alvarado in the middle of everything.

Alvarado has put together the two best back-to-back games of his college days, but he took no moral victory from Wednesday’s spunk.

He’s not surprised by the Jackets’ fight that he helps ignite.

“I don’t think I learned (anything). I knew my team. I knew how we really are,” he said. “It’s just coming out little by little. My team . . . I’m riding with my boys. We fell short today, but I promise you we’re going to be all right in this ACC.” 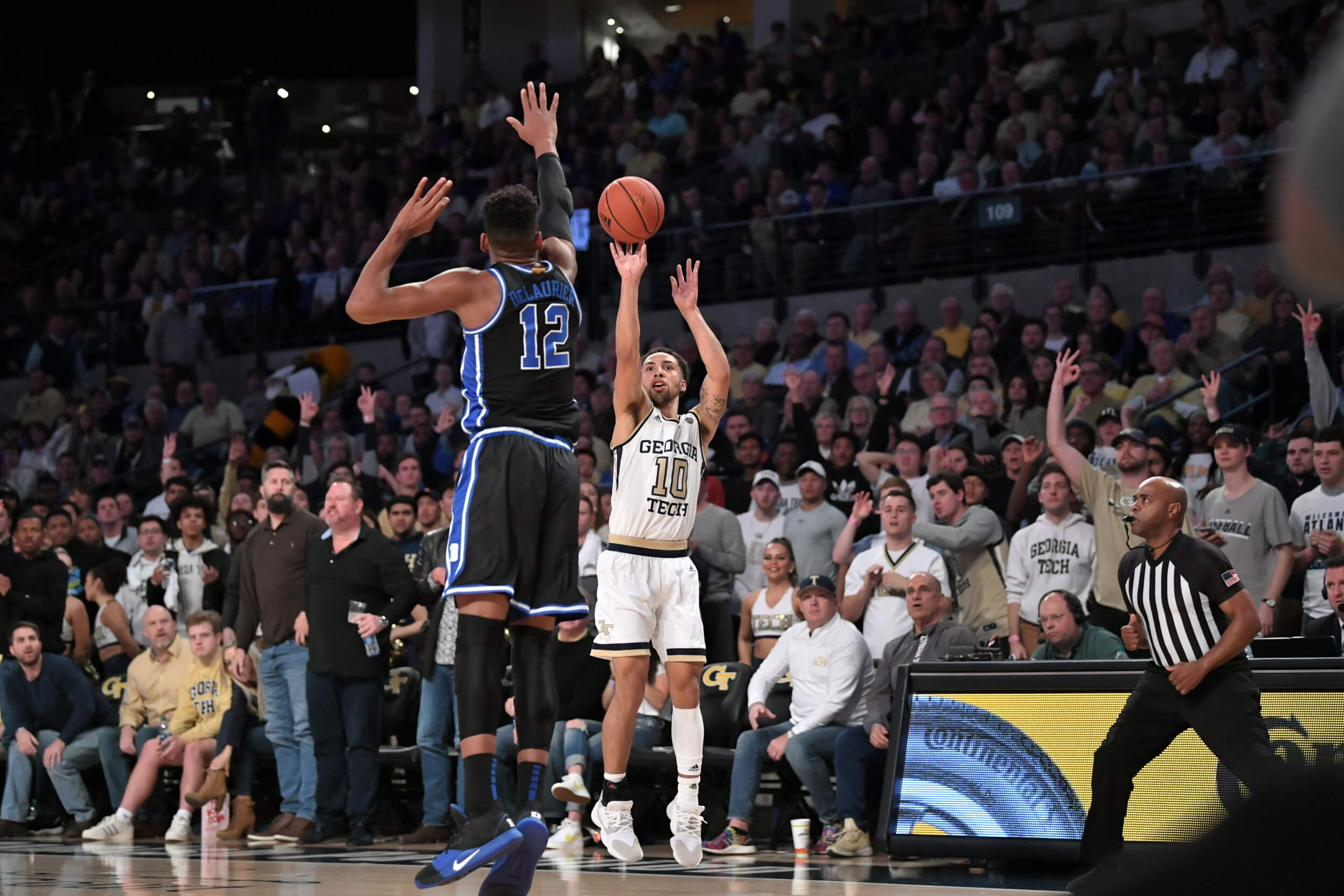 Alvarado scored 18 points with five assists against No. 2 Duke, keeping Tech with the Blue Devils until the final four minutes of the game. (photo by Danny Karnik)

The Jackets had a rough shooting night, missing their last 11 shots, but there was no denying Tech’s competitiveness. The Jackets out-rebounded Duke 39-30, won more loose balls than they lost and remained hot at the free throw line (13-of-15).

“Now that they’ve got their whole team together, I think they can play with anybody,” said Duke coach Mike Krzyzewski. “That’s a big-time win for us because their crowd was great and they were really good. I thought both teams played so hard.”

McCamish indeed rocked, perhaps more loudly than ever since the rec-creation of the former Alexander Memorial Coliseum opened its doors.

Alvarado was front and center.

As the Jackets built their early eight-point lead, he scored twice on layups and assisted on a dunk by center James Banks III, who finished with 14 points, a career-high 15 rebounds and seven blocked shots in his most well-rounded game of the season.

It’s been a bumpy season for him and for the Jackets.

He sprained that right ankle before Tech’s second game, and missed the Elon contest. He came back for the game at Georgia, but left early after playing ineffectively.

Head coach Josh Pastner shut him down, explaining first that his point man would be out for a while and later suggesting that he probably wouldn’t play again until the Jackets went to Florida State for a game on Dec. 31. That would be nine straight games missed, and 10 overall.

Alvarado beat the schedule, and returned to action in the Diamond Head Classic before Christmas.

His numbers would not catch your breath in Hawai’i, but his effect was clear.

In three games prior, all without him, the Jackets went 80.9, 78.9 and 64.2 in losses to Syracuse, Kentucky and Ball State. Tech was disjointed in those games.

Against Duke, the Jackets’ offensive efficiency was 89.5.

These numbers when raw, and not mixed against strength of schedule (Tech’s SOS is one of the very highest-ranked in the nation), are not overwhelmingly impressive against the nation. Yet when indexed against the Jackets’ defensive efficiency rating, which is 90.3, the Jackets look to have more than a fighting chance against anybody when Alvarado is in the mix.

Alvarado leads Georgia Tech to its first win at Chapel Hill since 2010.

Likely owing to his injury struggles, Alvarado’s 11.0 ppg is below his Tech career average and each of his first two seasons. His shooting percentages are off, other than his 89.5 mark from the free throw line. His rebounds (1.9) are well down because perhaps he’s less inclined to dive into the muck with that ankle. Yet his assists (4.5) are at a career-high level and he leads the Jackets in that and the ACC in steals (2.3).

“With Jose, we’re a pretty good basketball team, and without Jose we’re just highs and lows,” Pastner said. “It’s just Jose does a lot for us that doesn’t show up in the box score with his leadership, toughness, he helps other guys on the floor.”

Alvarado wasn’t especially sharp upon returning to game action in Hawai’i, at least not when it came to statistics.

“I could say that, but my mom and my dad always told me once you’re on the court, I don’t think it’s an excuse,” he said. “Obviously, I could say yeah, it was my first time back from my injury, and yeah, I guess it was a little bit getting back in my groove.”

Jose looks to be back on track.

He hit a 3-pointer to start the Jackets’ 11-0 run in the second half, fed Bubba Parham on the next possession for another three-ball, and then after a fast break three-pointer by Michael Devoe on the following possession, Alvarado banked in a layup for a 53-50 Tech lead with 11:37 lead in the game.

His runner in the lane a bit later pushed Tech ahead again at 57-55, and Jose gave the Jackets their last lead with two free throws to make it 59-58.

After he fed Devoe for a jumper that created the game’s last tie with 5:20 left, the Jackets missed six shots in the paint the rest of the way, and Duke clinched the game with five three throws for the game’s final points.

Maybe good signs, though, as the Jackets have 15 more conference games in an ACC that appears to be down vs. most years. They seem excited about Saturday’s game at Boston College.

“We wanted to come out and show when you play Georgia Tech, you’re going to remember us no matter is the outcome,” Alvarado said. “I can say one thing: I love how my teammates fight every time we get out on the court. We’re not playing soft.”