Inside The Chart: Gunning for More

#BestOfGT: The “consummate teammate” according to head coach Geoff Collins, Nathan Cottrell put nearly his full focus towards contributing on special teams as a senior in 2019. Not only did he fill a vital role for the Yellow Jackets in the first season of the Collins era, he parlayed his special teams prowess into a spot on the NFL’s Jacksonville Jaguars. Andy Demetra wrote about Cottrell’s transition to special teams ace last September.

Andy Demetra (The Voice of the Yellow Jackets) | Inside The Chart

Nathan Cottrell chuckled at the idea he set an all-time college football record for the fastest speed ever attained by someone wearing a No. 90 jersey.

Usually the domain of beefy linemen and bull-rushing defensive ends, the number isn’t often associated with speedsters who clocked a top speed of 21.46 miles per hour on a run against The Citadel according to Georgia Tech’s Catapult tracking system. Cottrell wore the #90 as part of Tech’s ongoing tribute to former teammate Brandon Adams, who passed away in March.

“I tweeted before that game, I was hoping I could make ‘Big B’ feel a little bit faster,” he said.

Speed has never been an issue for Cottrell, the Yellow Jackets’ 5’11,” 193-pound redshirt senior from Knoxville, Tenn.  For the past three years he showcased it at A-Back, where he averaged an impressive 8.0 yards over 80 career carries.  He scored four touchdowns in 2018, including Tech’s lone score in the Quick Lane Bowl.

As Georgia Tech transitions to a pro-style offense under head coach Geoff Collins, Cottrell could easily be seen as a casualty of that change. He spent part of the Spring trying his hand at slot receiver before returning to running back over the summer. Through three games he only has one carry, a three-yard loss late in the season opener versus Clemson.

But rather than sulk, Cottrell has found a new outlet for his speed, establishing himself as the Yellow Jackets’ top gunner on punts – while earning lofty praise from his head coach.

“He is everything that this culture is all about. He plays with unbelievable effort every single time,” said Collins, a noted evangelist of special teams.

“Everyday I’m just trying to come out and perfect the craft and find something new to get better at,” Cottrell said. 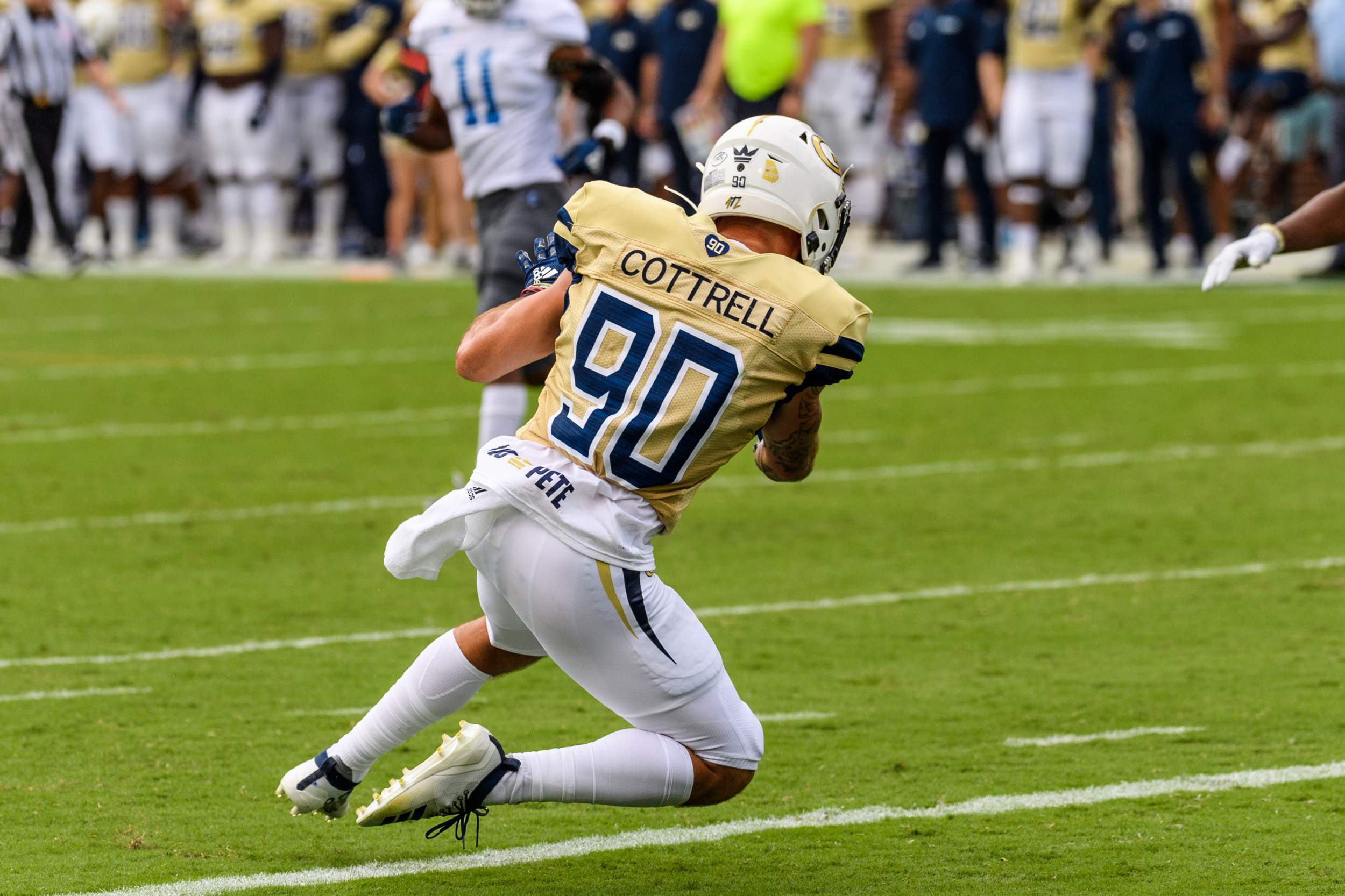 What’s more, Cottrell says he had never played gunner before this year. He only started practicing it in limited amounts during the preseason.

“It’s been a lot of fun.  Just getting to do down there and run as fast as I can, whenever I get the opportunity, to tackle somebody or down the ball and pin the opposing offense deep,” he explained.

Cottrell says he’s leaned on the techniques he learned during his cross-training at receiver.

“Watching film going into each game is different. I try to look at their punt return team and how they like to defend their gunners.  Depending on what kind of leverage they like to play with, I can kind of get my release pre-loaded in my mind before going out there,” he explained.

Cottrell still trains with the running backs, though his position is officially listed as “Flex” on Tech’s Above The Line chart (Collins describes the “Flex” as a running back/slot receiver hybrid that can be used in a variety of motions and formations). He knows the groupthink that centered around him last spring, as the Yellow Jackets were evaluating their roster for the season ahead.  He was set to graduate with his degree in business administration in May, his position group suddenly had a surplus of players – in the constantly churning turnstile of the NCAA transfer portal, who would have blamed him if he left in search of more carries for his final season?

“It honestly never crossed my mind to go somewhere else,” Cottrell said. “Right when Collins got here, he brought all the seniors in. He just talked about the culture he wanted to bring in, the culture he wants to define, and how he plans on doing that. He just made us all feel like such an important part to make that happen.”

That unselfishness hasn’t gone unnoticed by his teammates and coaches.

“He’s a guy that you want in the foxhole with you. If you have to count on someone to do the right thing at the right time, it’s probably going to be Nathan Cottrell. He’s so selfless in whatever he does,” said cornerback Tre Swilling. 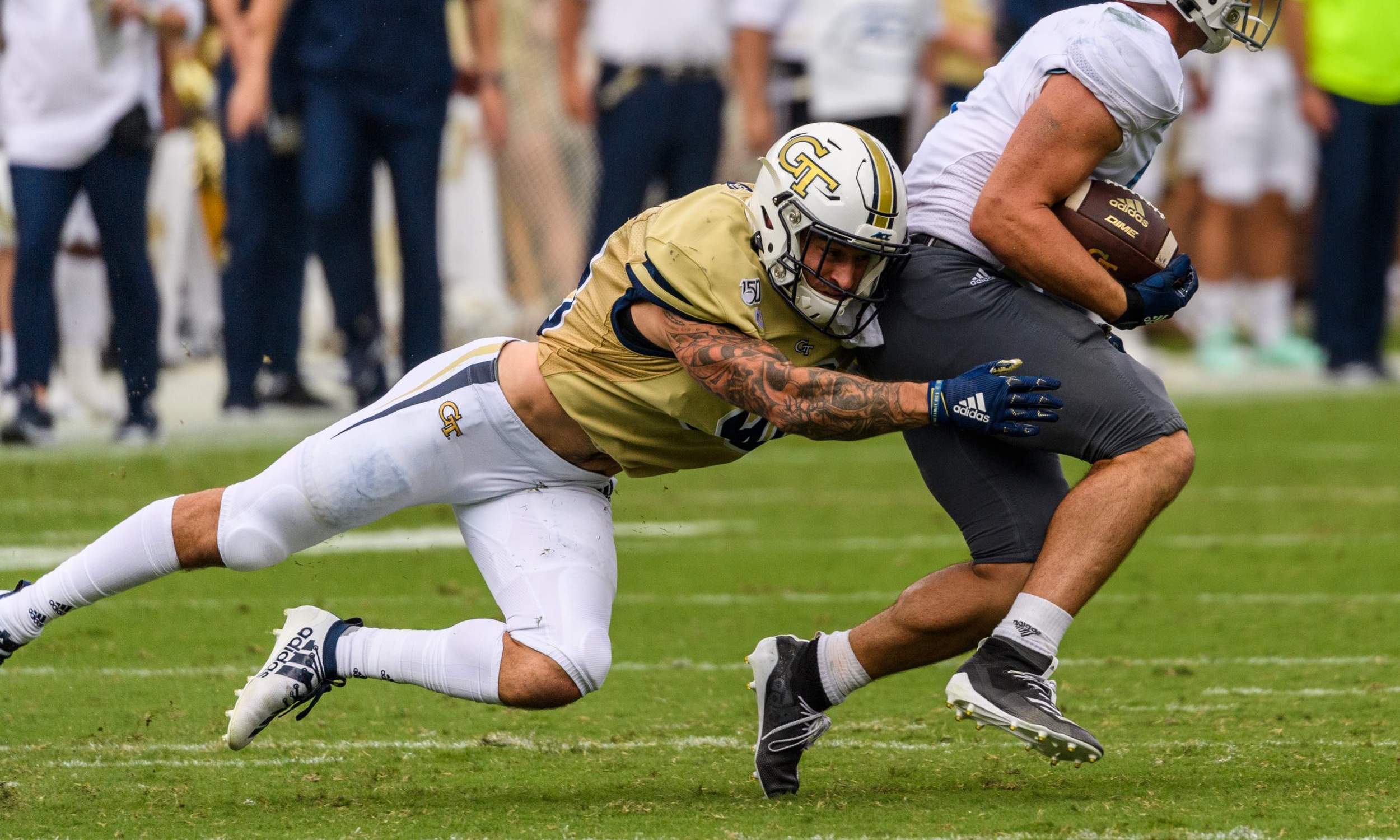 “We have two types of people in this program: great leaders and great teammates. He is the consummate teammate – one of the greatest teammates in the organization,” added Collins.

Cottrell says Collins recently texted him a link to an ESPN article about Matthew Slater, who’s now in his 12th season as the New England Patriots’ gunner. The message, if unspoken, was clear: a professional career as a special teams ace is attainable. Cottrell’s work on special teams hasn’t cooled his desire to get snaps on offense, but for the moment he has thrown himself into his gunner duties, all while balancing the 12 hours he’s taking this semester toward his master’s in building construction and facility management.

Asked again about his mindset, how someone could see his stock-in-trade all but vanish yet still seem so committed and content, Cottrell goes back to the offseason.

That bond hardened his resolve to make an impact, no matter where – or how often – he played.

“Whatever it is that I can to help the team, I’ll do it. No matter if I’m carrying the ball, whether it’s on special teams, it doesn’t really matter to me as long as I can contribute in some way,” he said.

Rest assured he’ll be doing it full speed, not once looking back.