Behind the Banner: Matt Harpring

He scored 2,225 points and pulled down 997 rebounds, grabbed 176 steals and handed out 289 assists. He played 4,472 minutes in a Georgia Tech uniform, but Matt Harpring’s career was best characterized in the few minutes after he left the court in the waning seconds of the Yellow Jackets’ Atlantic Coast Conference Tournament loss to Maryland.

With just over a minute left in Maryland’s 83-65 victory, Tech head coach Bobby Cremins called his senior All-American to the bench.

Harpring had not had one of his better games against the Terrapins, but gradually the crowd rose in appreciation as he made his exit from his final ACC Tournament game. The cheering began in the Tech section, but in a rare display of non-partisanship, the applause spread to every corner of the 24,000-seat Greensboro Coliseum as fans wearing every shade of Carolina blue, NC State red and Clemson orange joined in.

The cheering continued as a dejected Harpring took his seat on the bench, not realizing what was happening. Then, coaxed by Cremins and his teammates, Harpring stood and waved to the crowd.

“It didn’t sink in at first because I was still pretty emotional about the loss,” Harpring said after the game. “But it was a huge honor and compliment. When I look back on it tomorrow or the next day, after I forget the game, I’ll say, ‘Wow, that was great.’”

“Unbelievable,” agreed Cremins. “I’ve been in this league a long time, and it’s one of the nicest gestures and best compliments I’ve seen.”

Maryland head coach Gary Williams echoed the sentiments of the crowd, saying “you can only go but so far in terms of hard work, and Harpring is right there. At the end of a game, he never leaves anything on the floor.”

Afterward, an appreciative Harpring said, “I don’t know why they did it. I guess they see something in me that they like. I think I’d appreciate my work ethic and that I always give 100 percent, and if I’m not shooting well, I’ll try to help my team in other ways.

“It was a great farewell, almost like having my jersey retired.”

Such accolades never would have been predicted for Harpring when he arrived at Georgia Tech in 1995.

The 6-8, 225-pounder was better known for his football skills at Atlanta’s Marist School, receiving scholarship offers to play quarterback for several schools, including Northwestern and Wisconsin. He was lightly recruited in basketball until very late in his senior season, improving his stock and gaining the notice of Cremins as he led his high school team to the state title.

From the time he stepped onto the court at Alexander Memorial Coliseum, Harpring exceeded expectations, averaging 12.1 points and 6.2 rebounds a game while finishing a close second for the 1995 ACC Rookie of the Year award.

But that was only a glimpse of what was to come, because as a sophomore, Harpring blossomed into one of the nation’s top players as he helped Tech reach the NCAA Sweet 16. On a team that featured sensational point guard Stephon Marbury, it was Harpring who was the most consistent force with his all-around skills, averaging 18.6 points and 8.1 rebounds a game while leading the team in three-point shooting.

Harpring’s junior year wasn’t as successful as his sophomore campaign as the undermanned Jackets limped to a 9-18 record. Through the frustration of Tech’s first losing season since 1983, Harpring remained the ultimate warrior, and despite constant double-teams, he produced 19.0 points and 8.2 rebounds a game.

Many encouraged him to enter the NBA following that difficult season, but Harpring opted to stay the course.

“When I came to college, I never dreamed that I would have the chance to be a first-round draft pick,” said Harpring, a two-time Academic All-American. “I came to Georgia Tech to get my degree and to prepare for a career after basketball.

“I love college basketball, and I didn’t want to leave after a season like that. It was important to me to come back and help get Tech basketball back where it belongs.”

The result was an outstanding senior season in which he earned numerous All-America awards, including first-team honors from Basketball America magazine as well as hoops guru Dick Vitale. While averaging 21.6 points and 9.4 rebounds a game, he joined Mark Price as the only Yellow Jackets to receive first-team all-ACC honors three times. After earning his degree in June of 1998, the Orlando Magic made him the 15th pick in the NBA draft.

He finished second in Tech history in both scoring and rebounding, coming within eight points of Rich Yunkus’ school record of 2,232 career points. In addition, he finished among Tech’s career leaders in virtually every statistical category, from assists to steals to blocked shots and of course, minutes played.

Even before that ACC Tournament salute, the Georgia Tech family paid tribute to Harpring, the consummate student-athlete, by retiring his No. 15 jersey prior to his final home game against Duke.

More importantly, Harpring helped Tech enjoy a winning season with a 19-14 mark and trip to the National Invitation Tournament, in which the Jackets advanced to the quarterfinals.

“I can’t say enough about what Matt Harpring meant to Georgia Tech,” said Cremins. “I’m really proud of him for coming back for his senior season, and I’m happy that he could go out on a winning note.” 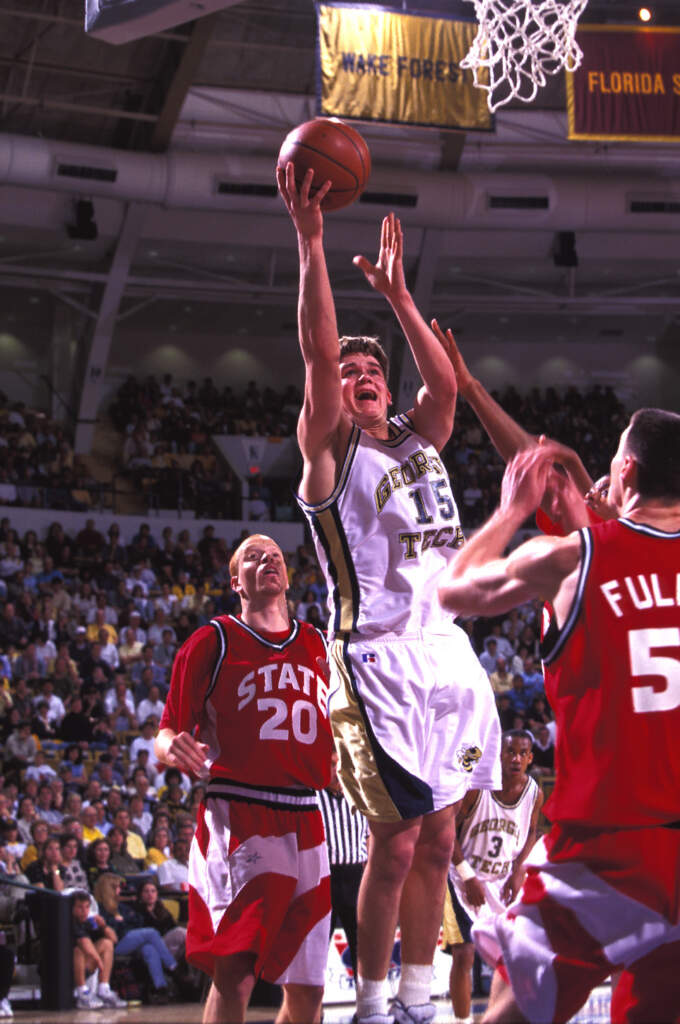 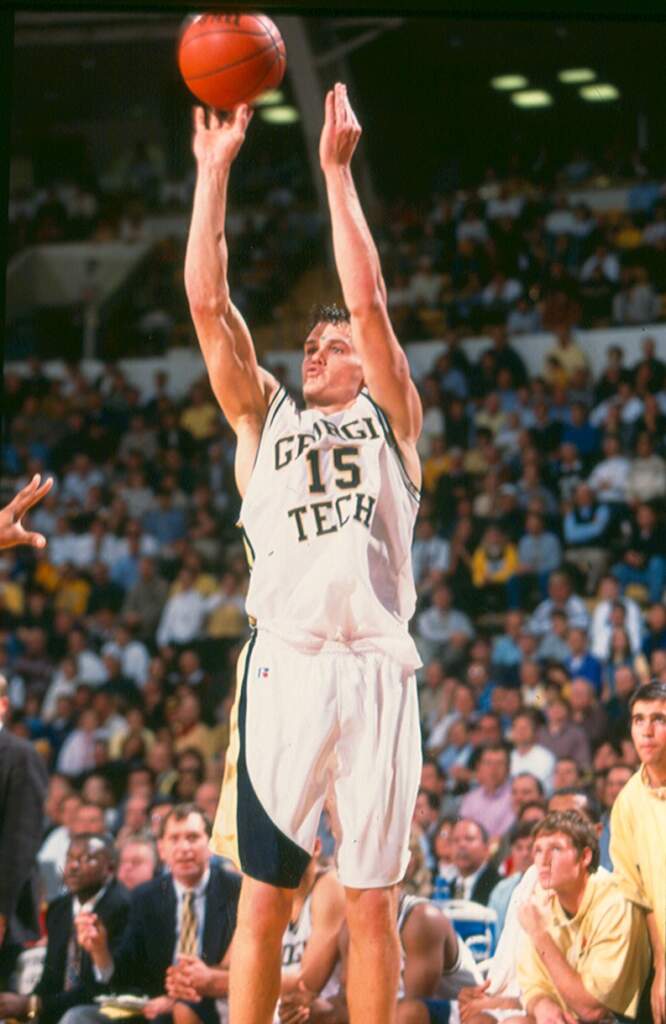 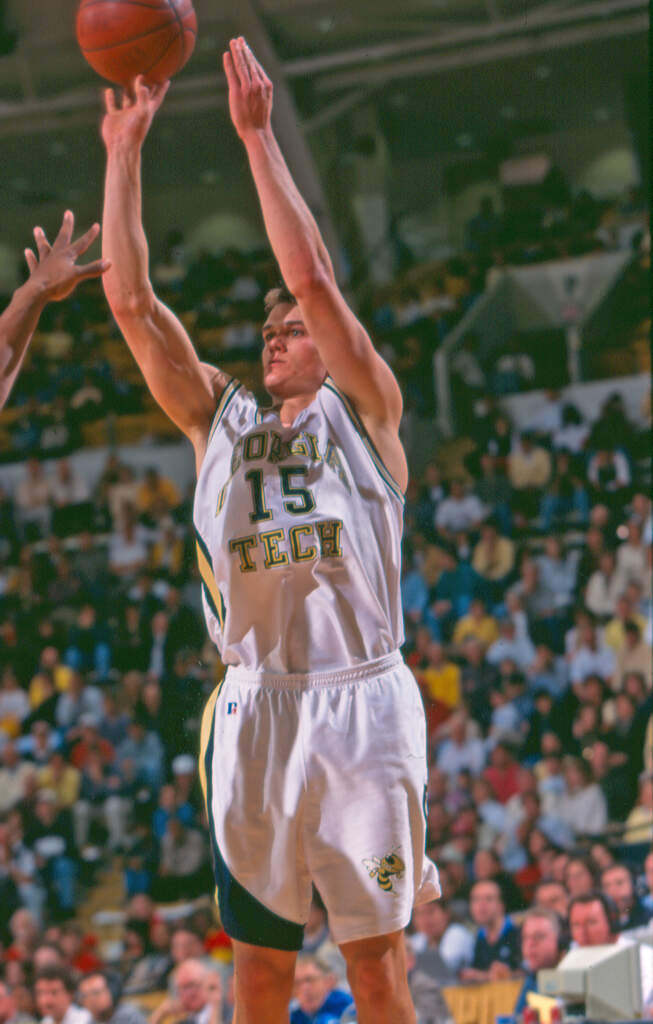 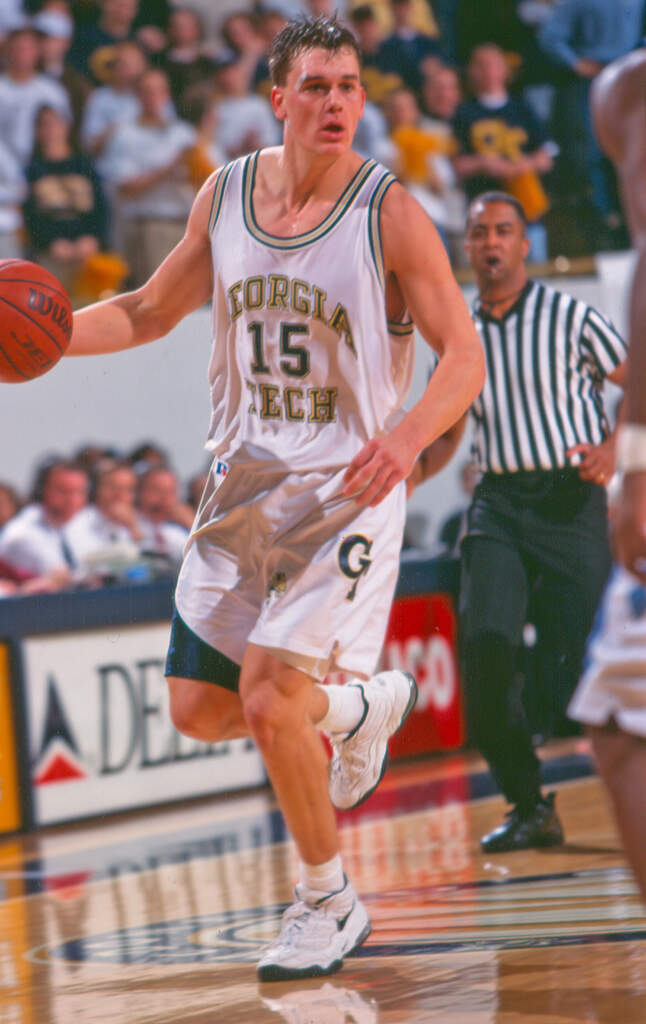 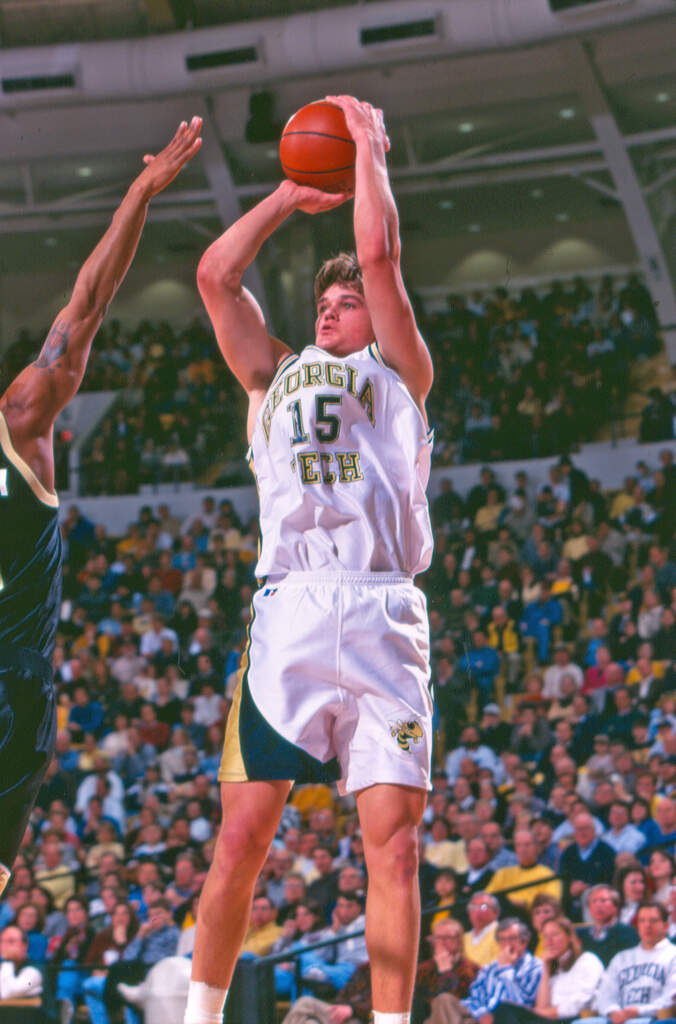 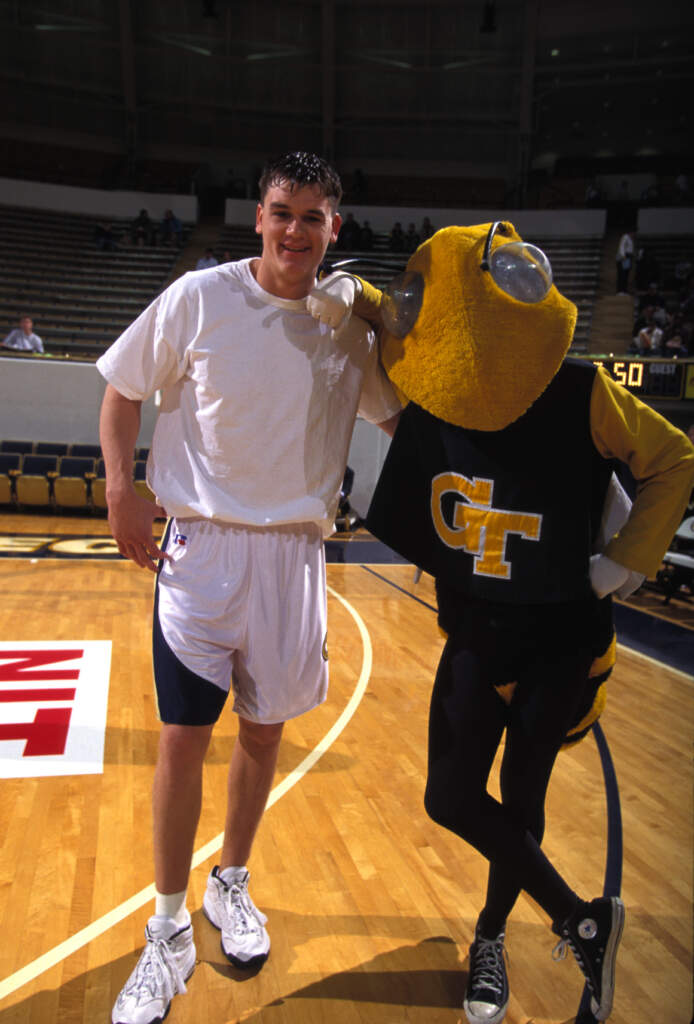 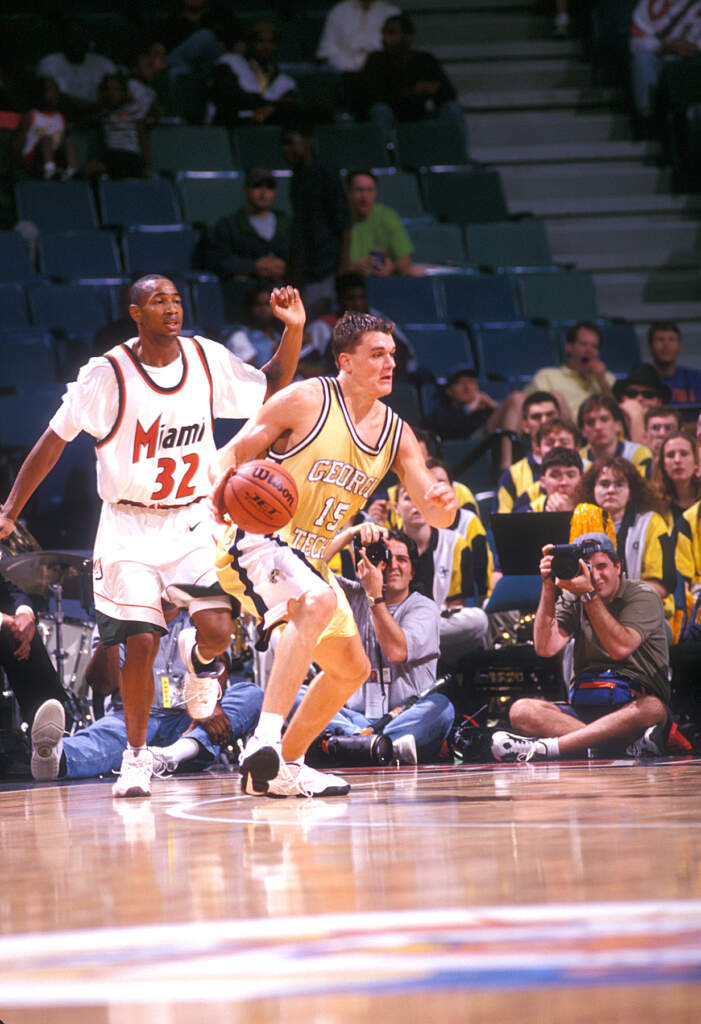 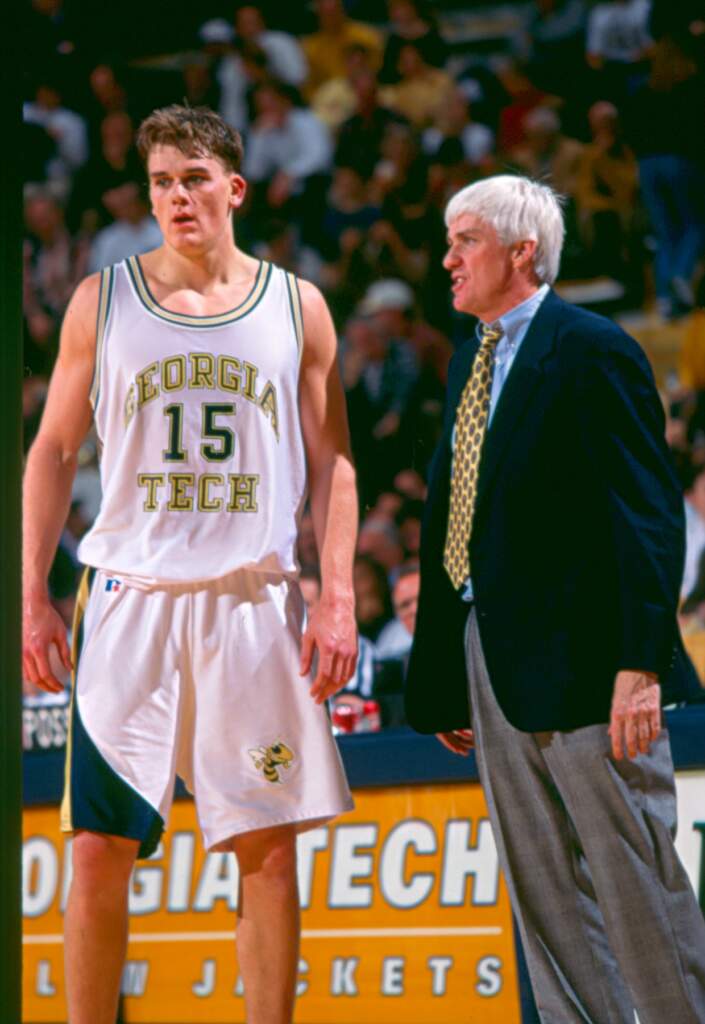 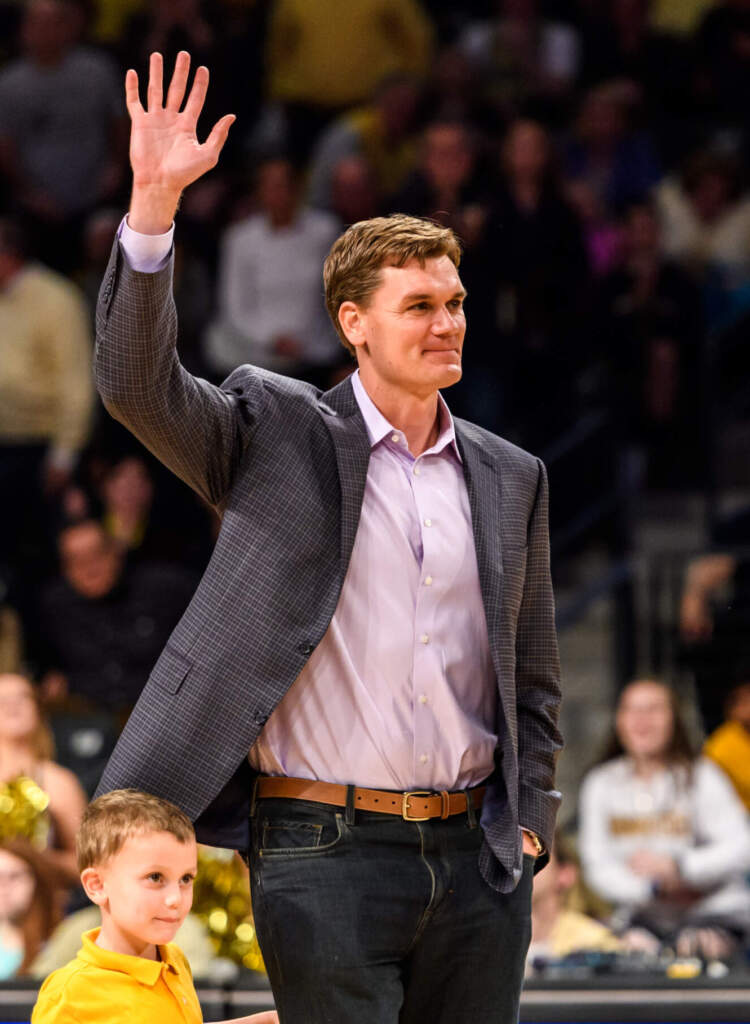 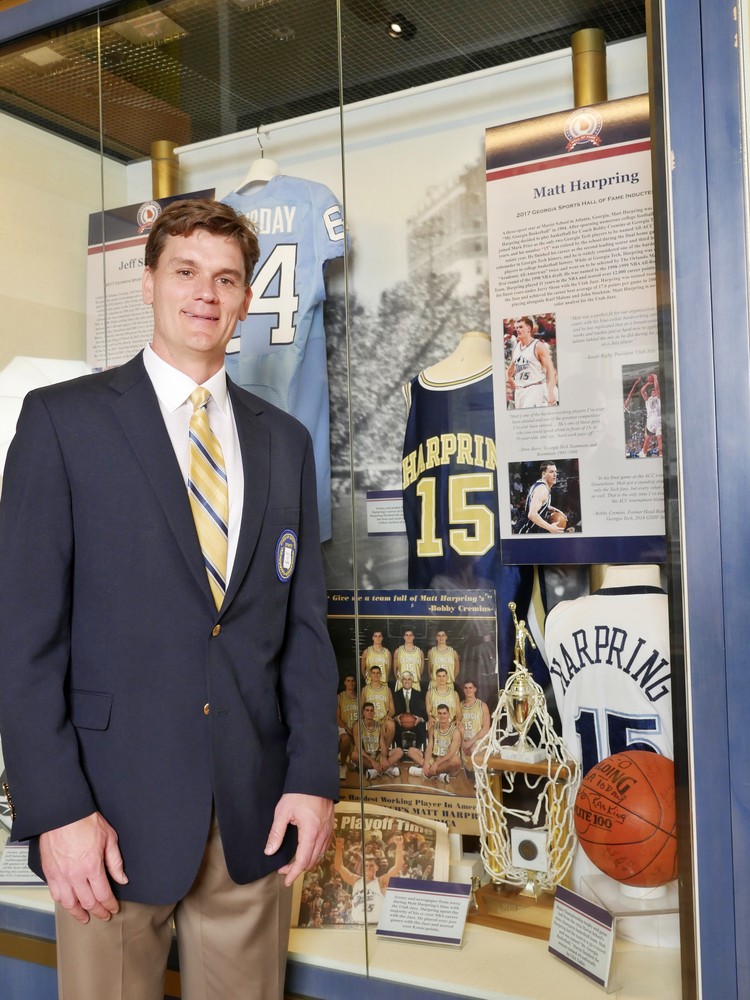 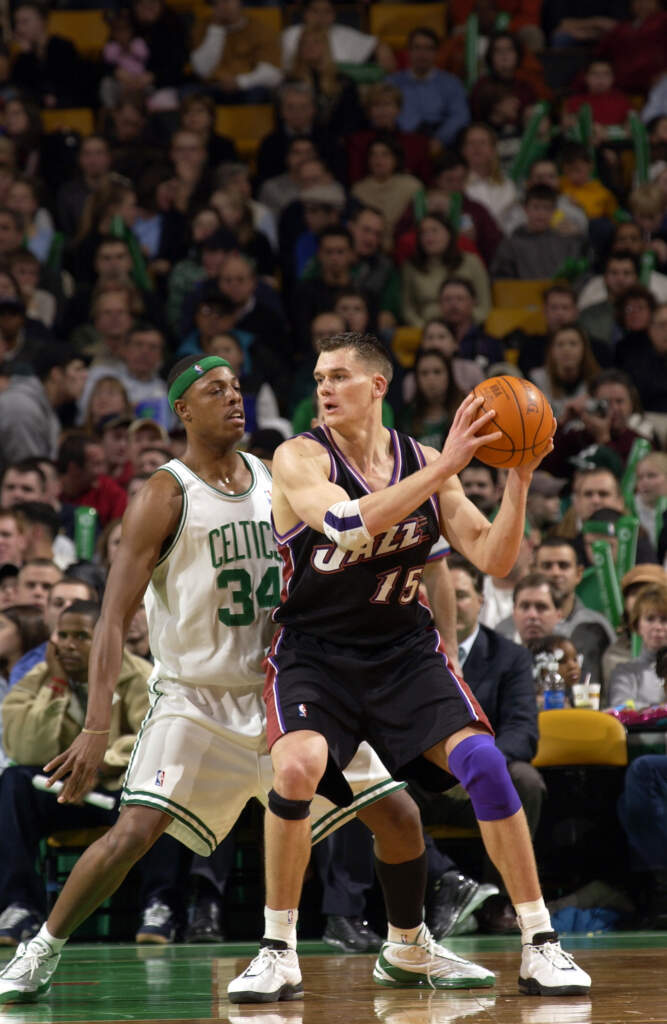 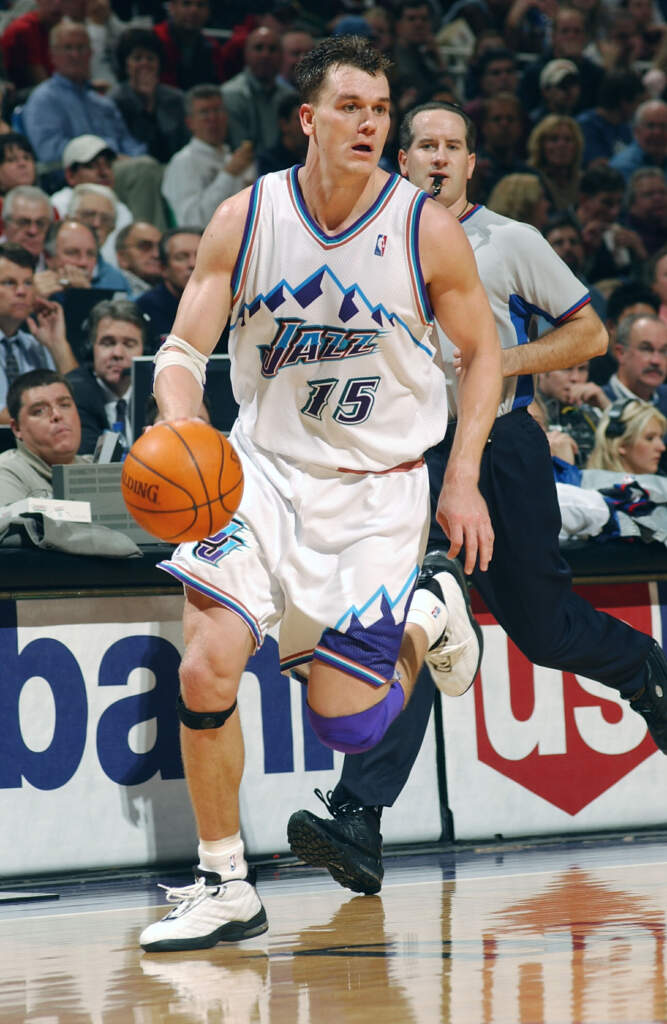 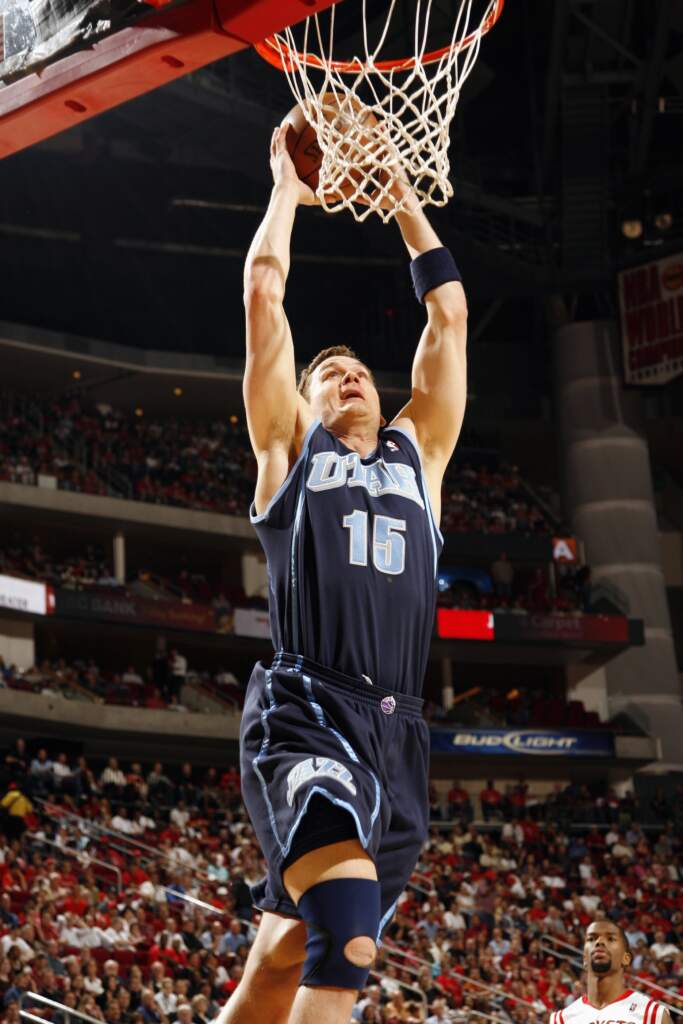 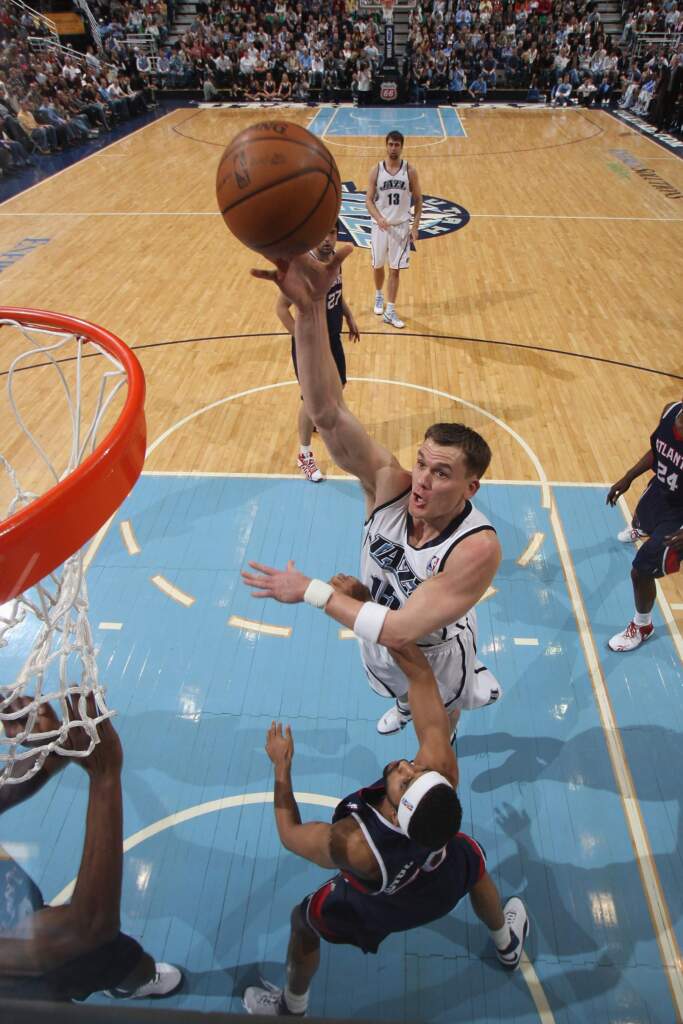 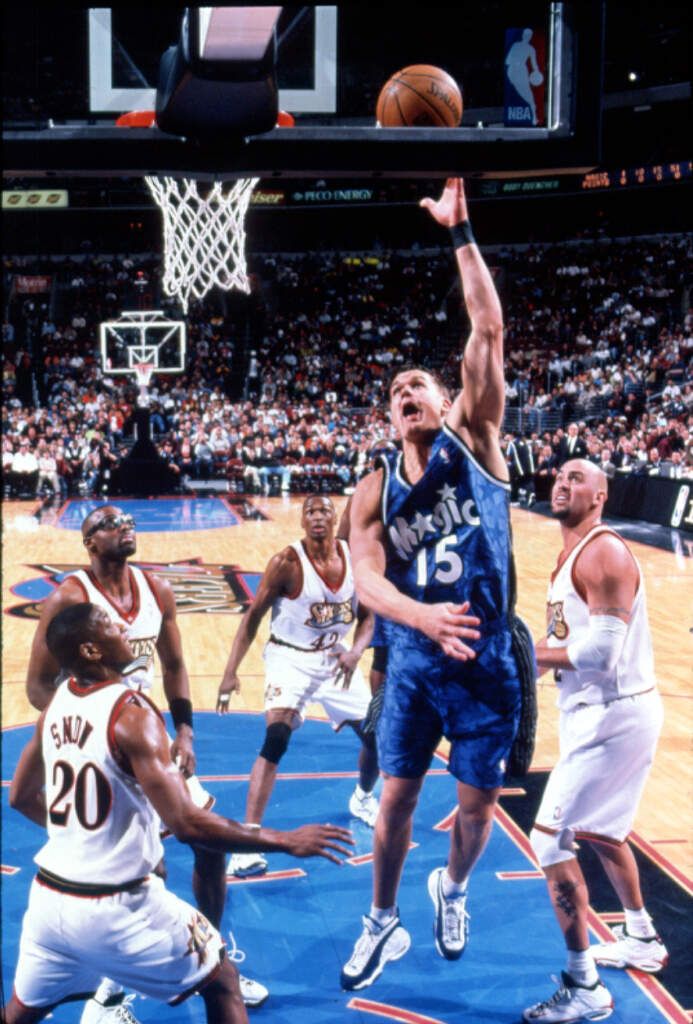 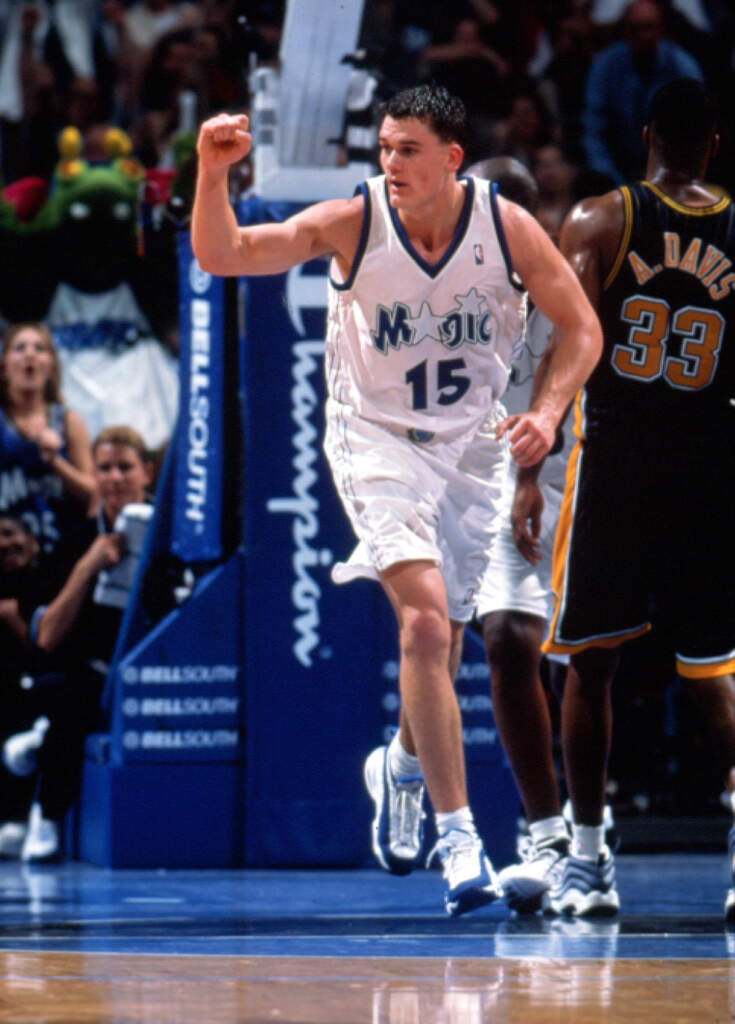