THE FLATS – Georgia Tech’s Jose Alvarado and Moses Wright, who led the Yellow Jackets to the Atlantic Coast Conference championship and an automatic bid to the NCAA Tournament, were named Georgia Men’s Co-Players of the Year Friday by the Atlanta Tipoff Club, while Yellow Jacket head coach Josh Pastner was honored as the Whack Hyder Men’s College Coach of the Year.

Pastner, in his fifth year leading the Tech program, guided the Yellow Jackets to the fourth ACC title in team history and its first since 1993, and its first NCAA Tournament berth since 2010. At 17-9, the Yellow Jackets finished with their highest winning percentage since the 2004 national runner-up team went 28-10. Tech’s 11-6 ACC record was its fourth-best in team history by winning percentage, and its fourth-place regular-season finish was the team’s best since 2004. The college coach of the year award is named for legendary Tech coach John “Whack” Hyder, who led the Jackets from 1952-73. 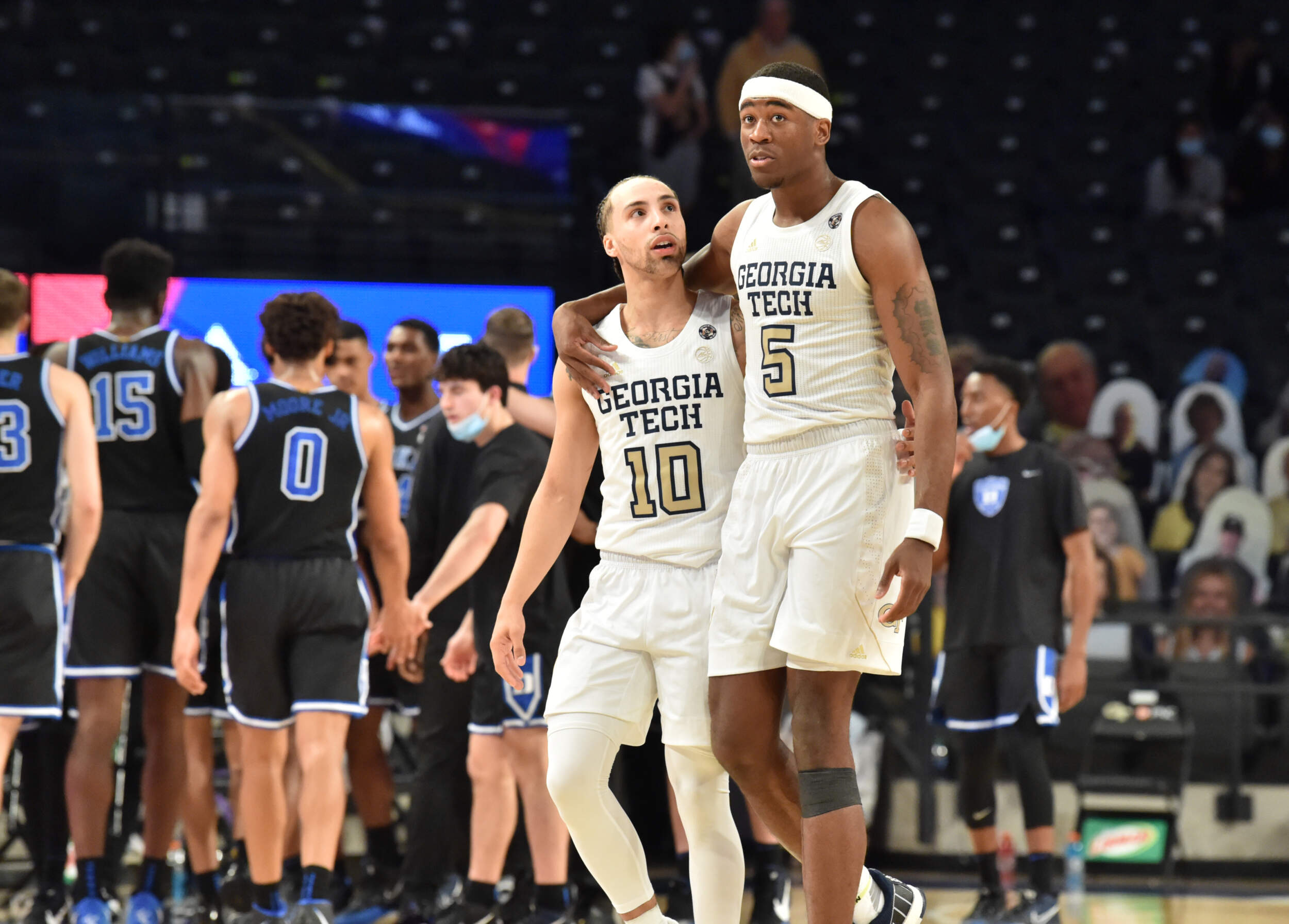 The ACC’s Defensive Player of the Year and a second-team All-ACC choice, Alvarado ranks among the ACC’s top 10 in scoring (15.2 ppg), field goal percentage (.504), free throw percentage (No. 2 at .838), assists (4.1) and assist/turnover ratio (2.00). The ACC leader in steals by a wide margin and author of some stout defensive efforts against some of the Atlantic Coast Conference’s top scorers, the “Brooklyn Burglar” averaged 3.1 steals per game in conference play this season, 2.85 in all games, and is on course to lead the ACC in steals for the second straight year, something not done since Chris Paul in 2004 and 2005. The Brooklyn, N.Y., senior also has been named to the All-District 2 team by the National Basketball Association.

The ACC Player of the Year and a first-team all-conference selection, Wright logged seven doubles in 2020-21 and ranks among the ACC top 10 in several categories as well. The 6-9 forward is third in scoring average (17.4 ppg), fourth in rebound average (8.04 rpg), fourth in field goal percentage (.532), seventh in steals (1.48 per game), sixth in blocked shots (1.64 per game), fourth in offensive rebounds (3.16 rpg) and sixth in minutes (6th, 35.34 mpg). The Raleigh, N.C., native was previously named honorable mention All-American by the Associated Press and to the All-District IV team by the United States Basketball Writers Association. 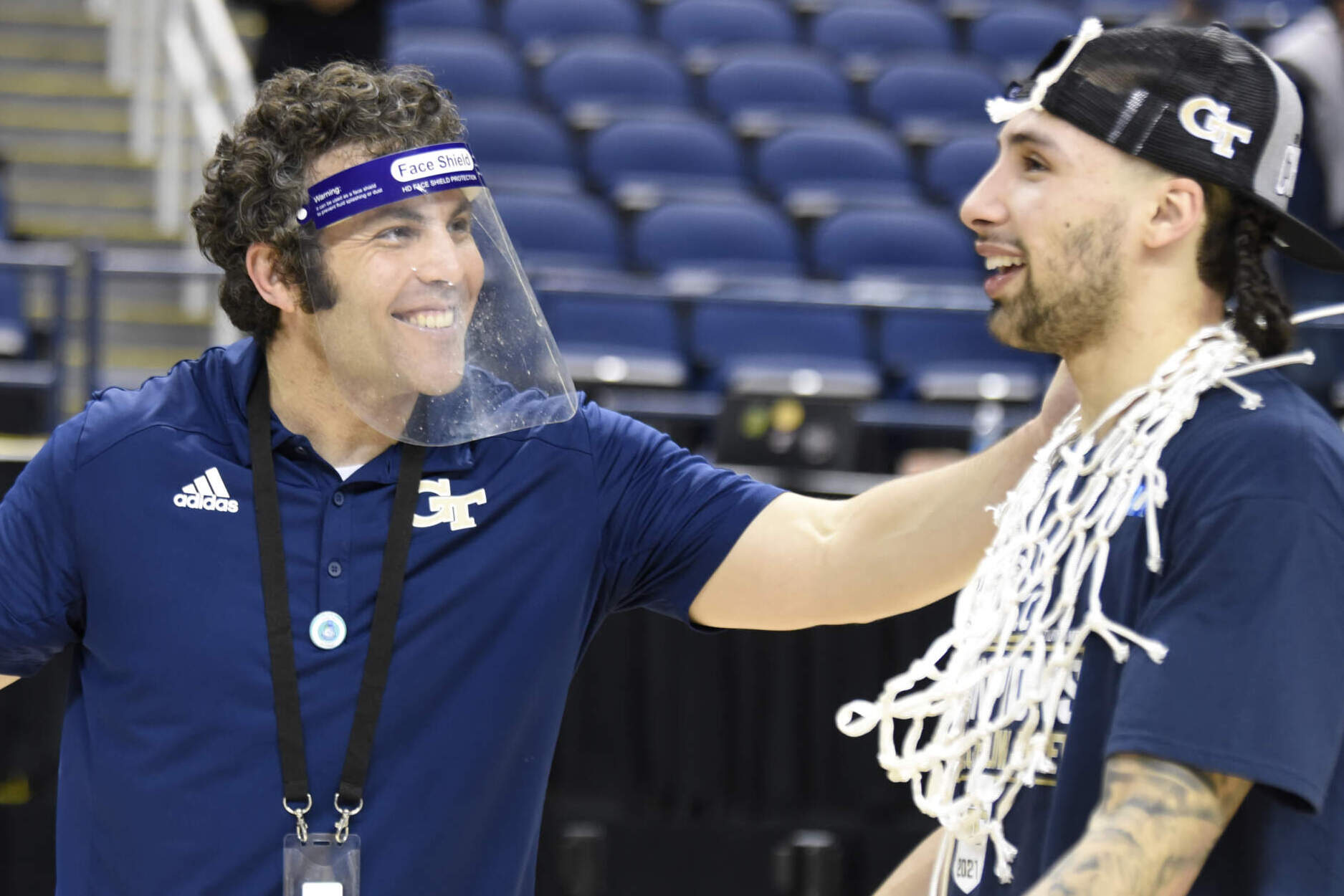 "Despite the challenges of this season, we witnessed tremendous college basketball in the state of Georgia once teams took to the court, culminating in championships and postseason tournament berths. The contributions that these winners have made to their teams are results of hard work and determination, and a drive for excellence. We are incredibly proud to honor these athletes and coaches for their amazing accomplishments this season."

Georgia Tech’s men’s basketball team is in its fifth year under head coach Josh Pastner, having won the Atlantic Coast Conference Tournament championship after finishing fourth in the regular season. Tech has been a member of the Atlantic Coast Conference since 1979, winning four ACC Championships (1985, 1990, 1993, 2021), playing in the NCAA Tournament 17 times and playing in two Final Fours (1990, 2004). Connect with Georgia Tech Men’s Basketball on social media by liking their Facebook Page, or following on Twitter (@GTMBB) and Instagram. For more information on Tech basketball, visit Ramblinwreck.com.

Founded during the 1956-57 season, the Atlanta Tipoff Club is committed to promoting the game of basketball and recognizing the outstanding accomplishments of those who make the game so exciting. The Atlanta Tipoff Club administers the Naismith Awards, the most prestigious national honors in all of college and high school basketball. Named in honor of Dr. James Naismith, inventor of the game of basketball, the family of Naismith Awards annually recognizes the most outstanding men’s and women’s college and high school basketball players and coaches. Other Naismith Awards are presented to the men’s and women’s college basketball defensive players of the year, as well as lifetime achievement awards to basketball officials and outstanding contributors to the game. UCLA’s Lew Alcindor received the first Jersey Mike’s Naismith Trophy in 1969, while the late Anne Donovan (Old Dominion) was the inaugural women’s recipient in 1983. Corporate partners of the Naismith Awards include Jersey Mike’s and Werner Ladder.