A Comeback for the Ages Lifts Tech to Second Round

SAN ANTONIO – Georgia Tech women’s basketball kept its historic season going on Sunday afternoon by rallying from a 17-point halftime deficit to defeat Stephen F. Austin, 54-52 in overtime, in the first round of the NCAA Tournament at Bill Greehey Arena.

With the victory, Georgia Tech (16-8), the fifth seed in the Hemisfair Region, advances to the second round of the NCAA Tournament for the first time since 2012. The Yellow Jackets will play the winner of Sunday night’s game between No. 4-seeded West Virginia and No. 13 Lehigh in the second round on Tuesday (time and location TBA).

The Jackets earned their first NCAA Tournament win in the most dramatic fashion, clawing their way back from a 34-17 halftime hole, forcing overtime and then holding Stephen F. Austin (24-3) off at the buzzer to seal the victory.

The second half was a completely different story, as the Jackets made 44.4% of their field goals while limiting SFA to just 15.4% shooting from the field (4-of-26) after the break. Despite the turnaround on both ends of the floor, Tech still found itself trailing by six points (48-42) with less than three minutes to go in regulation. However, the Jackets scored the final six points – four on a runout layup and a jumper in the paint by Lorela Cubaj and the final two on a pair of free throws by Anaya Boyd with 1:12 remaining – to send the game to overtime knotted at 48-apiece.

Georgia Tech dominated the opening minutes of overtime and led by five points (54-49) when Lotta-Maj Lahtinen sank a jumper with a little more than a minute-and-a-half to go.

However, an old-fashioned 3-point play by SFA’s Avery Brittingham cut the Jackets’ lead to 54-52 with 47 seconds to go and a missed 3-pointer by Cubaj gave the Ladyjacks the ball back with 19 second left on the clock. After a timeout, SFA worked the ball into Brittingham in the post but under heavy defensive pressure from the Jackets, she missed two layups in the closing seconds. She rebounded both misses and put up a third shot that went in, but it was after the buzzer. A short review confirmed that the basket was no good and Tech was heading to the second round.

Georgia Tech’s stifling defense after halftime was most evident in the game’s most crucial moments, as the Yellow Jackets held SFA scoreless for an 8:47 stretch that spanned the final 5:46 of regulation and the first 3:01 of overtime. The Jackets limited the Ladyjacks to just one made field goal over the final 10:46 of the ballgame.

Cubaj and Lahtinen led Georgia Tech with 14 points apiece. Cubaj also pulled down a team-high 10 rebounds for her 13th double-double of the season, and led all players with four assists. Kierra Fletcher rounded out three Yellow Jackets in double-figures with 11 points and grabbed nine rebounds. Lahtinen played a big role in Tech’s defensive effort with a game-high four steals, three of which came after halftime.

The win snapped a 12-game losing streak for Tech in overtime games. The Jackets had not won in OT since an 89-82 triumph versus Wake Forest on Jan. 31, 2013. Additionally, Tech overcoming a 17-point deficit marks the fourth largest margin overcome in NCAA Tournament history. The largest is 21 points by Texas A&M in 2017.

The loss snapped a 19-game winning streak for 12th-seeded Stephen F. Austin (24-3), the undefeated Southland Conference regular-season and tournament champion, whose resume included wins over St. Mary’s, VCU and Auburn. The defeat was the Ladyjacks’ first since a 61-59 loss at Houston on Dec. 11. 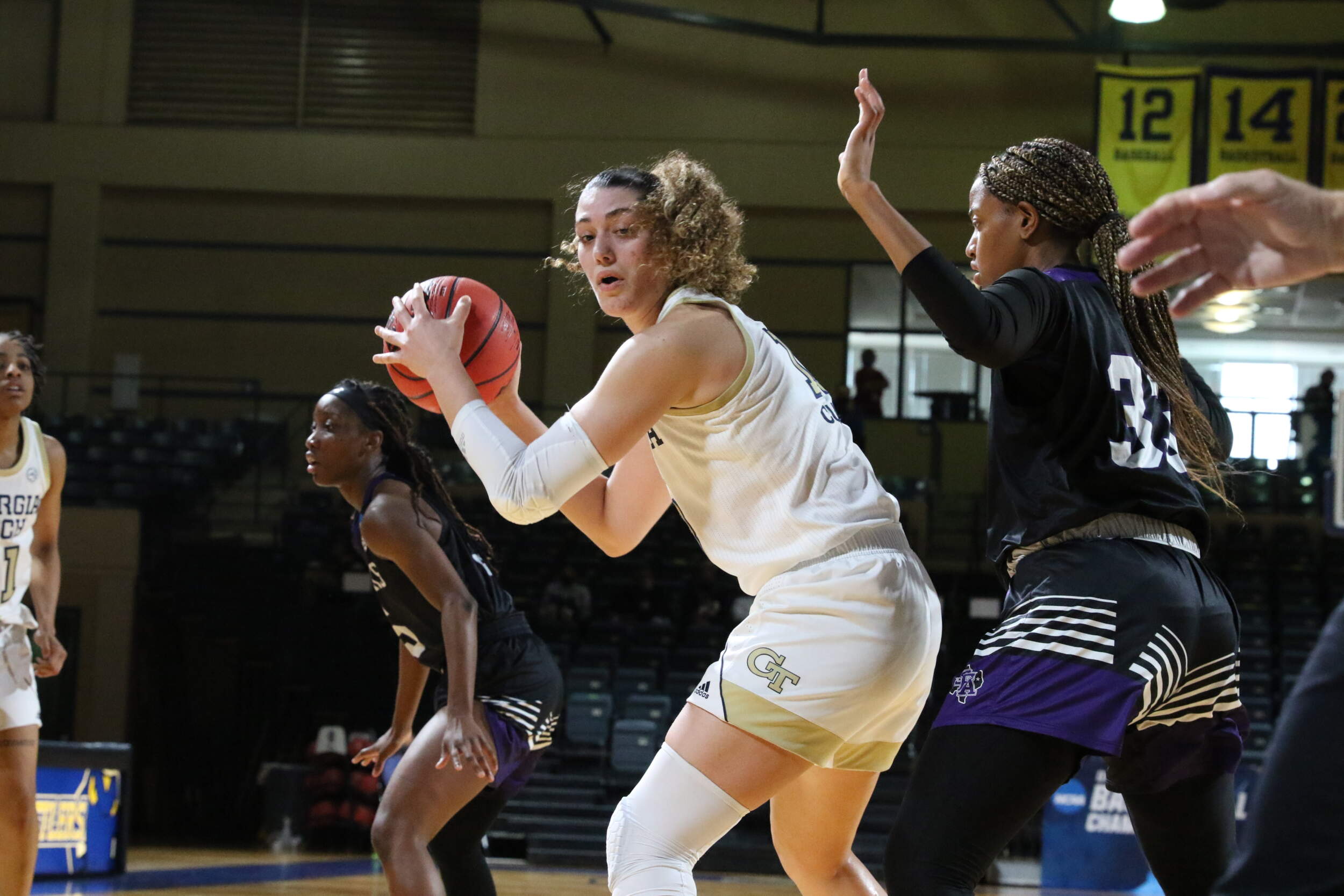 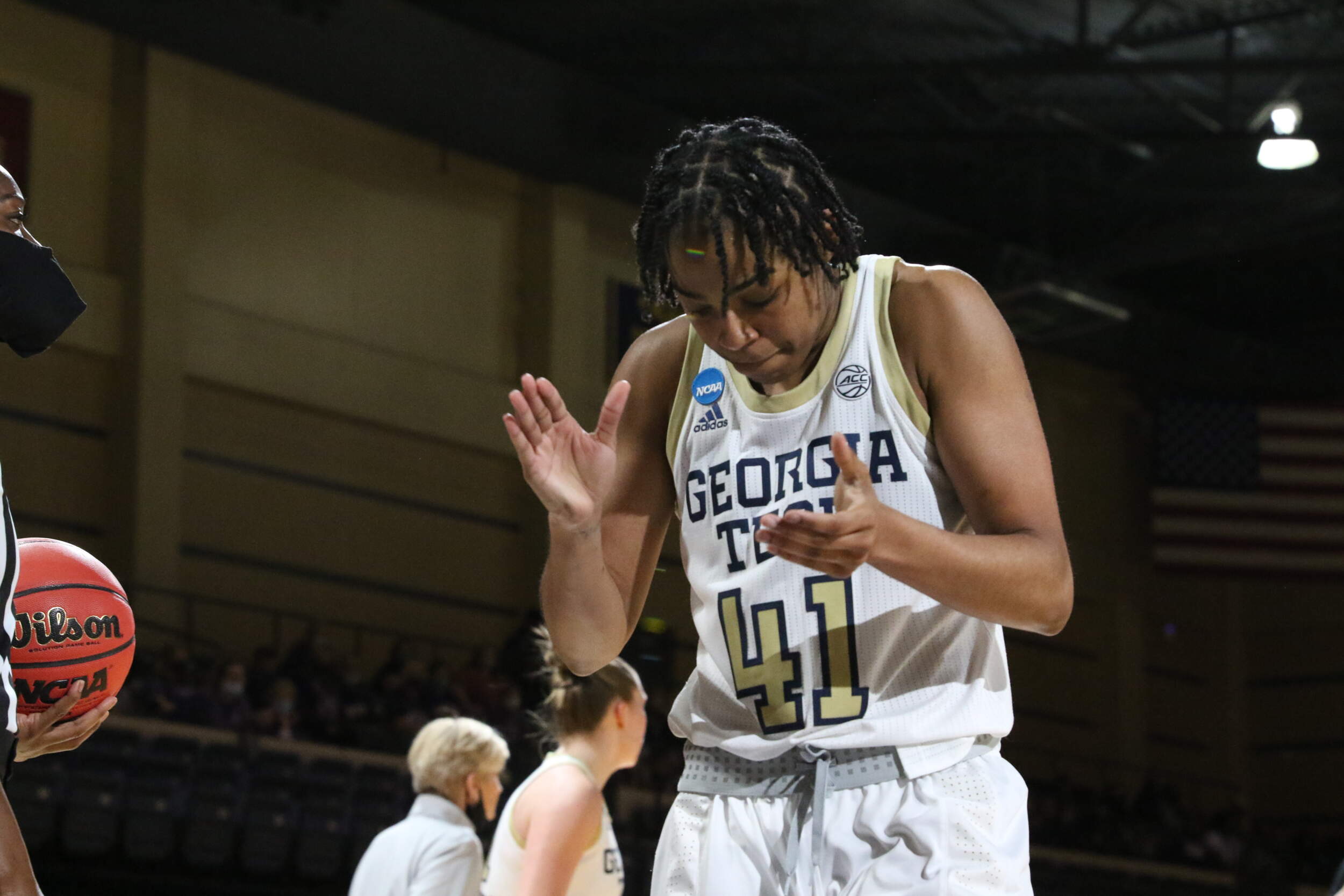