50 Years Ago: The Road to San Francisco

Georgia Tech once traveled the “Road to San Francisco” in 1960 in its only NCAA Tournament appearance prior to the streak of nine straight trips reeled off by the Bobby Cremins-coached Yellow Jackets from 1985-93.

Fueled by guard Roger Kaiser and forward Dave Denton, known as the “South’s best one-two punch,” Georgia Tech demonstrated a valiant effort en route to a 22-6 finish that year and runner-up honors in the Southeastern Conference.

The Jackets’ starting five featured Kaiser, who averaged a team-high 22.5 points per game, and Bobby Dews in the backcourt, Denton and Wayne Richards at the forwards and Jim Riley at center.

“I am sure this is the best defensive team I have ever coached at Georgia Tech,” said John “Whack” Hyder, as his Jackets yielded only 58.9 points per game.

Entering the NCAA Tournament, Hyder had guided Tech to a No. 8 national ranking in the United Press poll and a No. 13 slot in the Associated Press poll prior to the national tourney. The Jackets received a first-round bye although Hyder downplayed his squad’s chances saying they were in “over their heads.” 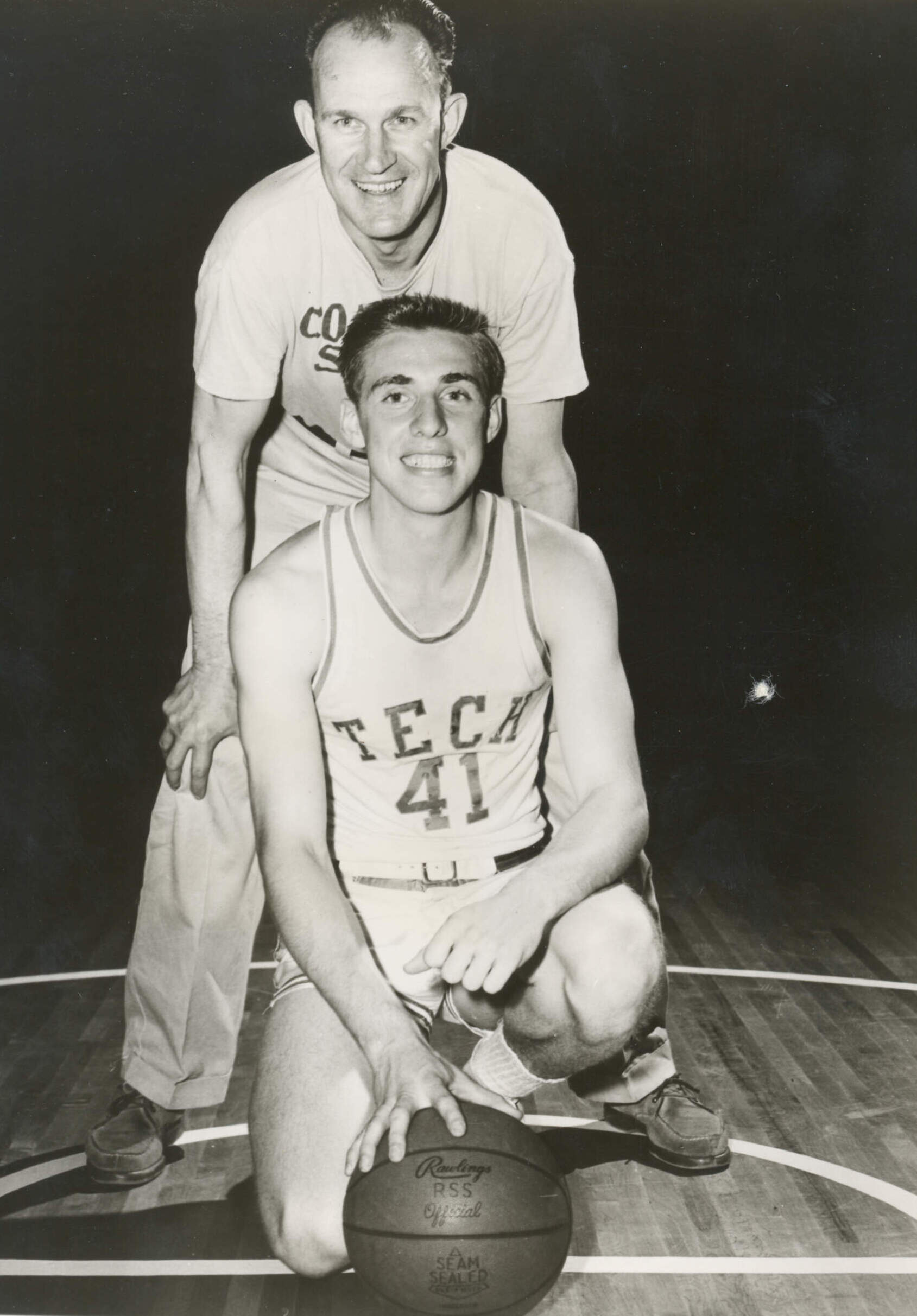 Ohio University upset Notre Dame in the first round to draw Tech in its next game. The Bobcats appeared to be a sleeping giant when they jumped out to a 19-6 lead over Tech at the 10:26 mark in the first half.

Behind center Howard Jolliff, who had 16 points and 15 rebounds in the first half, Ohio maintained a 33-23 halftime advantage. The Bobcats refused to fold and held a 12-point margin with 13 minutes left in the game.

But Tech applied the screws with its full-court pressure defense, taking the lead at 49-48 after a pair of free throws by Kaiser with 4:55 left. The All-America Kaiser proceeded to score 16 of Tech’s final 23 points, including several critical free throws, as Tech slipped by Ohio, 57-54.

Seemingly bewildered in the first half, Tech warmed up and wore out the Bobcats down the stretch as Kaiser finished with 25 points and Denton collected 15 points and 11 rebounds. As the Jackets advanced to the NCAA Final Eight, the “Road to San Francisco” got a lot steeper.

Ohio State, certainly one of the nation’s premier teams with future NBA stars Jerry Lucas (New York Knicks) and John Havlicek (Boston Celtics), had compiled a 22-3 record and a No. 2 national ranking. The game at Freedom Hall in Louisville, Ky., would be a contrast in styles between the Buckeyes’ whirlwind pace and the deliberate, possession pattern of the Jackets.

OSU head coach Fred Taylor singled out Kaiser as a “really great shot and Denton as a fine all-around player” in preparation for the matchup. 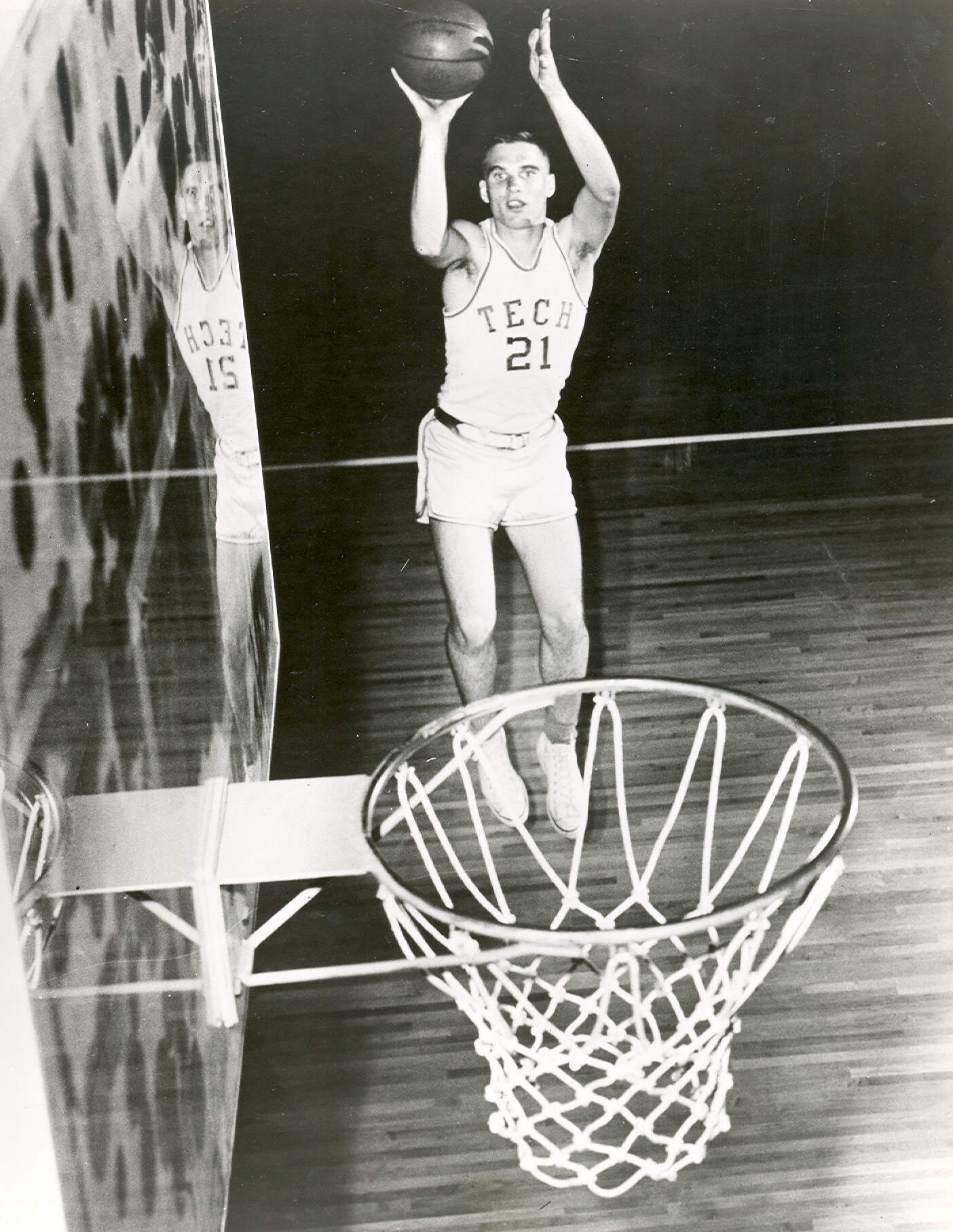 Roger Kaiser (above), a junior guard, earned All-America mention in 1960, and would become a consensus first-team All-American in his senior year of 1961.

Although the physically overmatched Jackets lost 86-69 to Ohio State, which eventually won the national championship defeating California, the newspaper accurately described the grit and effort of Hyder’s 1959-60 team.

“A Georgia Tech team of incalculable courage refused to recognize its own human limitations here Saturday night in meeting the greatest offensive machine in the nation head-on, and emerged beaten, but unbowed.”

The game stayed tight the first few moments before the 6-8 Lucas gave OSU a lead it would never relinquish. The Buckeyes led 41-35 at halftime, and threatened to runaway in the second half. But Tech stayed within striking distance at 66-56 with 8:53 left before Ohio State flexed its biceps.

True to form, Kaiser led the Jackets with 27 points while Denton chipped in 15. A balanced Buckeye scoring attack featured Lucas with 25, Joe Roberts with 19 and Havlicek with 15.

“They just had too much manpower for us,” Hyder said. “They wore us down in the second half.”

But that 1960 team blazed a trail not to be forgotten. While the memory of Tech’s coveted Final Four appearance in 1990 remains fresh, the performance of Kaiser, Denton and the rest of Hyder’s troops should not be overlooked in Tech’s first NCAA appearance.