He knows because his road certainly wasn’t.

Popovich also preaches that anything good is possible if you work hard enough.

He knows that, too, as success has been a frequent traveling partner on the road he’s traveled.

In 2019, the Tucson, Ariz., native’s road has led to Midtown Atlanta, where he is in his first season as cornerbacks coach/defensive special-teams coordinator at Georgia Tech. It’s a reunion with Geoff Collins, with whom he worked at FIU when Collins was defensive coordinator/linebackers coach. 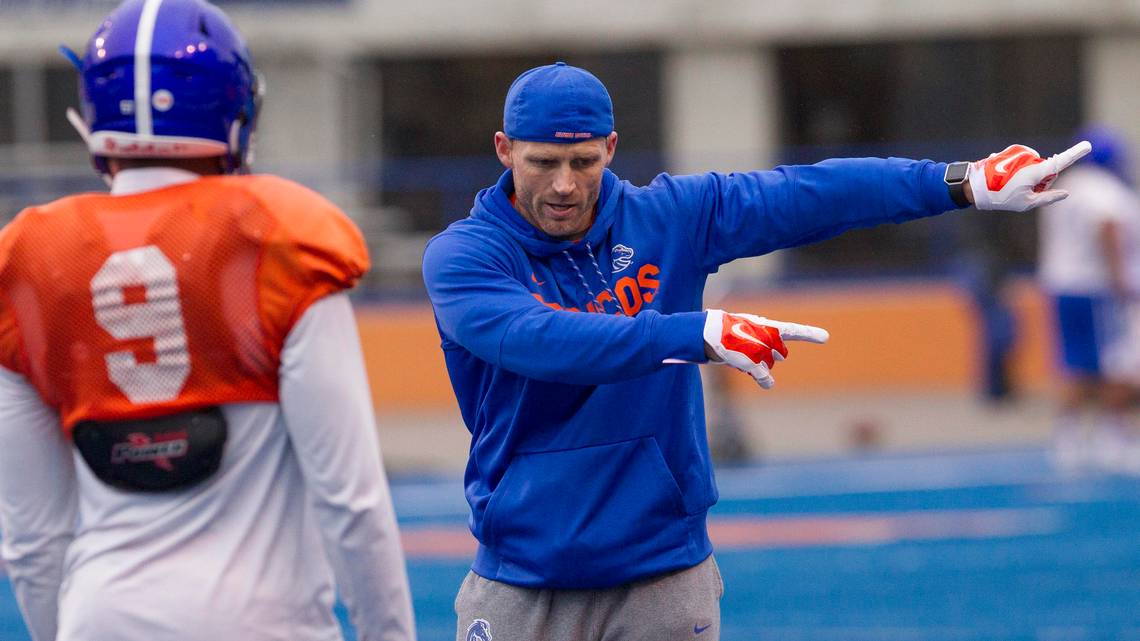 “I’ve worked with Coach Collins before, so I have a pretty good idea of how things will be run and how things are and the way he likes things,” he said. “We have the same philosophy of what we want to get done, how we want to get them done. So I think we’ve meshed pretty well.”

He expects to mesh as well with defensive coordinator Andrew Thacker, with whom he’ll be working for the first time.

“Just watching film from Temple and talking with Coach Thacker, all those ideas and philosophies and things translate, so it should be a pretty good deal,” he said. “As we’ve hung out (the staff is) really the same-minded type of individuals. We get along well and are kind of all headed in the same direction.”

He knows what direction he wants his players to go and will use the same message that worked for him.

“Hard work and just an obsessive mentality and approach to improving every single day and getting better, doing anything and everything to be great,” he said. “Just raw effort and toughness and working hard. I kind of like it when things get hard because a lot of people quit and that’s where it kind of separates the elite.

“I tried to play as an intelligent football player, I tried to play smart, I studied as much as I could to know the defense, to know opponents, to put myself in a good position to be successful,” he added. “Playing tough and physical and doing everything the coaches asked me to do. I don’t know that there’s any secret as much as just playing relentless and with effort and smart.”

Popovich strives to have the same positive effect that his coaches — Larry Coker, Butch Davis and Chuck Pagano — had on him at Miami, helping him overcome being that nervous freshman when walking onto the ‘Canes.

“They brought the mentality that I have now, ‘It doesn’t matter if you’re a walk-on, it doesn’t matter if you’re a scholarship guy. Once you’re on this team, you’re on this team,’” Popovich said. “You still walk in the locker room and you inherently feel like, ‘I’m not the quite same as everyone else. I’m a walk-on. This is new and I’ve got to make my name.’ It was definitely hard but I just went out there every day with the mentality and attitude that, ‘I’m going to go out there and do the best I can and enjoy doing it.’”

He’s excited about his new charges, to whom he’ll preach what he practiced.

“(It’s) a great group of guys,” said Popovich. “I’m really excited to get to work with them. I think they bring a lot of natural talent and ability and they’ve done some good things.

“We didn’t get hired because the last staff did a terrible job and they decided to change everything over. We definitely inherit some talent, some ability and a phenomenal group of young men,” said Popovich. “(There are) a lot of smart kids. I’m excited to work with all these guys and they all start with a clean slate. They’re all corners trying to win a starting job. I’m really excited to see what they have, what the potential is and try and develop them to their fullest.” 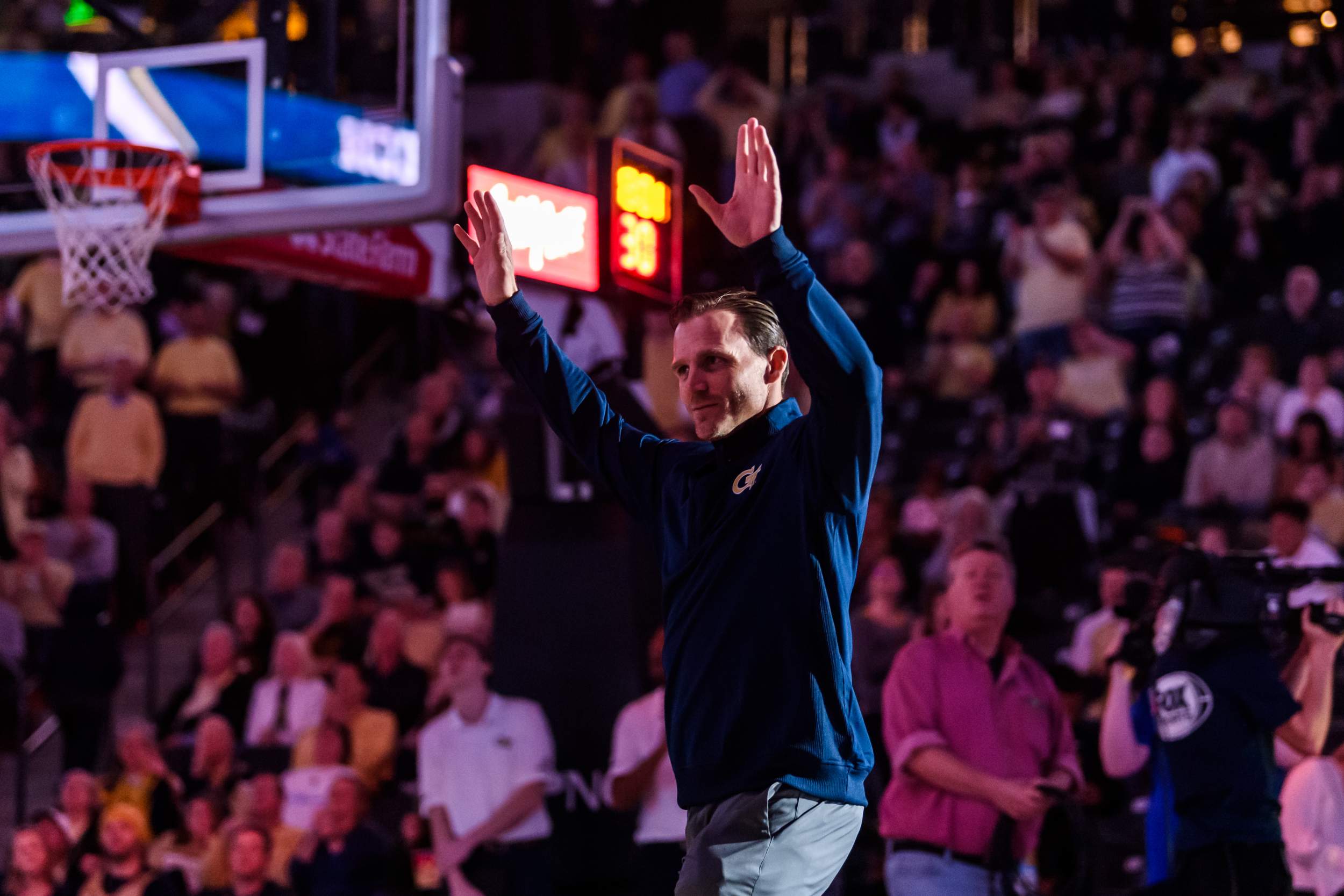 On Wednesday, there’ll be the anticipation about which guys Popovich will get to develop in the future. He’s looking forward to seeing what the Yellow Jackets net on National Signing Day.

He said the experience of recruiting Georgia and the Southeast was a little different than last year, when he was working the state of Idaho.

He also won’t turn down good players that may not have been recruited at all. He can relate well to them.

“Having walked on and played at the University of Miami definitely brings some credibility and the inspiration piece, I hope so,” he said. “I hope kids that walk on and want to come play here realize and begin to believe in themselves, ‘Hey, if he can do it I can do it.’

“I’m not prototypical. I’m not 6-2, I’m not long,’” said Popovich, who was listed at Miami as 5-11, 190, with a laugh. “But I hope it does inspire people and I try to give people hope and encourage them and kind of help them believe in themselves and realize who they can become and what they can become. I hope that drives people.”

Popovich’s hope for the season is that his corners will drive people, too — as in drive them crazy. He plans to implement an aggressive, “in-your-face” approach.

“Just getting up on wide receivers and eliminating free-access throws, forcing quarterbacks to throw the ball down the field, force them to try and throw on time and receivers to try and run routes on time,” he said. “Any time you can disrupt and allow your front guys to get after quarterbacks and buy them a split second helps create chaos. Anytime you can make a quarterback think is good. So if you start press, maybe right before the snap you get off and play off or you bail or you press. Just giving them different looks and not allowing them to walk out, get under center and look around and know exactly what he’s getting. We’ve got long corners, so I think that will tailor well to their abilities.

Popovich hopes the transition to the new systems will be as smooth and seamless as the transition he and wife, Lara, and daughters, Sayle and Copeleigh have made to their new city.

He credits Lara for the latter. In fact, he tips his hat to the entire staff’s significant others for the recruiting success the Jackets hope to see come to fruition on Wednesday.

“The wives deserve so much credit,” he said. “We come ahead and we start working with these players and we start recruiting. They’re left to kind of manage everything else around the house, in terms of, ‘Okay, let’s get the house ready to sell, let’s start packing things up, let’s figure out where the kids are going to school.’ It’s tough.

“For the kids, at this point, it’s fun,” he added, with a laugh. “It is hard when they start to develop relationships and friends at school but, at the same time, I had my kids watching videos of Buzz and getting them excited about that. So they love that part of it and they love the aspect of football itself.”

He believes the common ground of taking root in Atlanta has brought the staff even closer.

“We have a great staff and the families are just really, really good people,” he said. “It creates a tight bond among the staff and the families when you have to do those things, because everybody understands the tribulations of picking up your whole life and moving it to another city. It makes it easier when you’re doing it with other people and going through it at the same time with others. It’s pretty cool.”