#TGW: The More the Merriweather

It wasn’t long ago that Tyler Merriweather lived for blowing things up.

From 2014 through 2018, the 6-3, 240-pound defensive lineman bulldozed opposing offensive linemen and wrecked ball carriers, creating a mess of rubble in his wake.

These days, Merriweather still bulldozes, but making debris is no longer his end game. Instead, it’s his starting point in a process that in the end will create something beautiful and useful for Atlanta and its residents.

The Demopolis, Ala., native, in his second year as a project engineer with construction giant J.E. Dunn, appreciates the irony of his career path, which has gone from razing to raising.

“I know, that’s crazy,” said Merriweather, with a laugh. “I never looked at it that way, especially the defensive guys. We always took pride in messing things up and blowing stuff up. But now, just to see the pride that we take in the things that we’re building, the relationships that we’re building and how fun it is, I never would have thought it.”

Interestingly, the defensive cabal, which includes Merriweather, Terrell Lewis, Jalen Johnson, Shawn Kagawa, Brant Mitchell, and Tony Zenon, all of whom played either linebacker or defensive back, except Zenon, who was a running back, but DID have three career solo tackles — were not only all teammates, most of them were Merriweather’s roommates his freshman year.

“It’s a whole bunch of us. We all ended up basically within the same industry,” he said. “It kind of fits our culture and what we’re used to because, it’s no different what we’re managing now than managing a huddle. There’s a learning curve to it but once we figure out the terminology and the learning curve, it’s like anything else. You’re going to apply the hard work and the personable skills that you have to your everyday work life.”

Merriweather completed his undergraduate studies and participated in May 2018 commencement, receiving his degree in Business Administration, but admitted he wasn’t really sure in what direction he wanted to go. 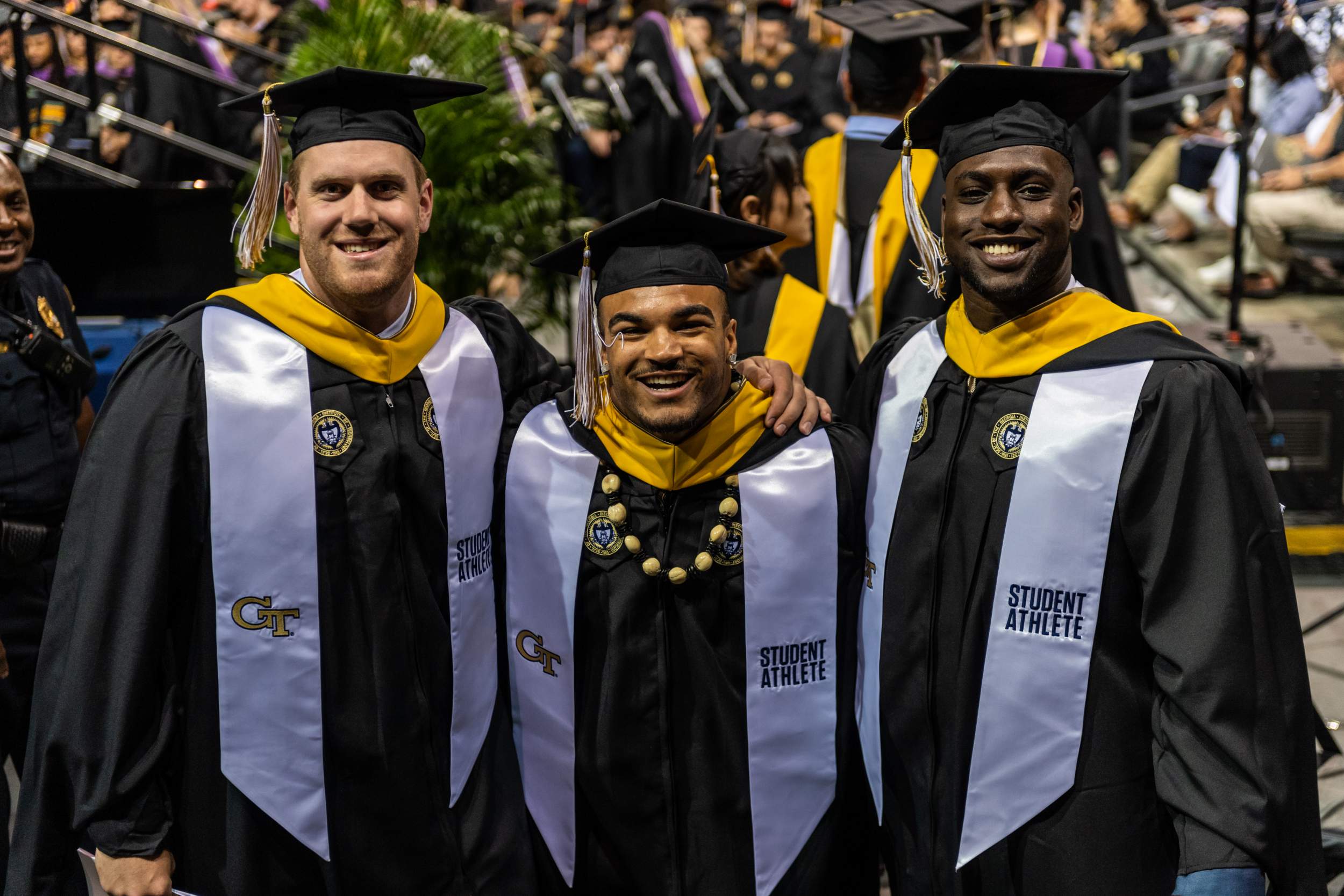 He took the GRE and was accepted into the Georgia Tech Building Construction and Facilities Management Masters Program. He earned his masters, then used his Georgia Tech connections to get his foot in the door, interning with Barton Executive Search for two years, where he assisted in research analysis, and, with the help of Tim Barton, managing partner at Barton Executive Search, got hired at Choate Construction as a project engineering intern for a year.

The Georgia Tech connections would bear fruit when he applied online to J.E. Dunn.

“Bria Weiss, a GT alumna, said, ‘We see you went to Georgia Tech. I would like to bring you in for an interview,’” Merriweather recalled. “It just went from there in building that relationship with her.”

He’d get hired and has been a project manager ever since. Merriweather’s first project was an addition to the Ron Clark Academy in South Atlanta.

“We basically did an auditorium addition to their existing school building, we also built them a parking lot and an athletic field,” he said. “It’s a two-story building. Mr. Ron Clark and Mrs. Kim Bearden (co-founder of the Ron Clark Academy), will actually now be teaching in that new building that we built for them. It’s pretty cool. It’s like Hogwarts more than anything. I can’t even describe it.”

Merriweather can more easily describe his day-to-day activity. As a project manager, he is something of a liaison and a coordinator of the different arms of Dunn’s current project, a highrise apartment being built on Third and Spring.

“My days are pretty typical. I have a meeting at 6:30 in the morning with all of our guys, like the field staff guys. We’ll go execute a plan, tell each other what we have going on,” he said. “For instance, I’m helping oversee the skin of the building, which is the exterior of the building, and some material work. I’ve been deemed the responsibility to look at our non-typical floors, which would be like the residential spaces and the amenity deck that we have. So, basically, it’s me coordinating with our trade partners on a day-to-day basis. Saying, like, ‘Hey, we have this coming up in two weeks. Do you have your delivery ready? Will there be any issues?’ If we’re falling behind, if I see something that comes up that throws us off schedule, how can we get back on schedule? Just kind of discussing those things with the guys. Then understanding what’s going on above me, with everyone else. ‘Hey, I’ve got this going on. Is this going to affect you or affect anything else?’ Just kind of keeping everybody in the loop.” 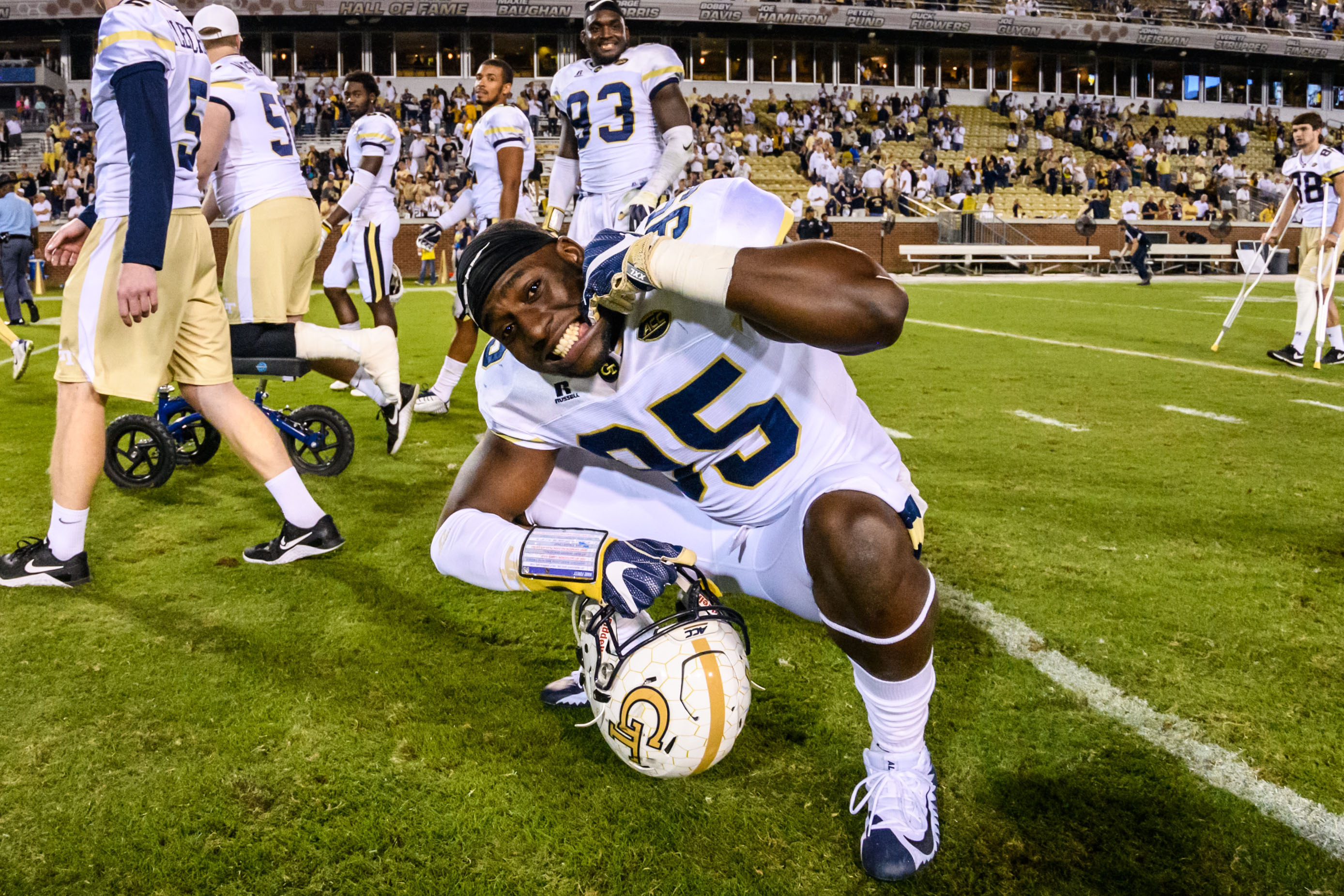 With his current project overlooking the Georgia Tech campus, he’s expecting to stay in the loop of what’s going on with Georgia Tech Football and getting a REALLY good look at the team’s games.

“Whenever we’re doing concrete pours and we’re doing floor to floor, I can literally stand on our slab and look out and see North Ave. Dining Hall, North Avenue Apartments,” he said. “By the time we start going up, and we keep going up, it should be around football season so I can kind of watch the games on a Saturday pour because we’re looking right over Bobby Dodd. It’s pretty cool.”

“Honestly, it’s so cool because that’s the mindset that I left Tech with. I wanted to be able to build buildings that will be recognizable throughout the city,” he said. “Especially the head start that Georgia Tech gave me, just to be able to be right here, back on campus, basically to build buildings, it’s definitely something to take pride in. Especially Ms. Leah (Thomas), Reid (Ferrin), all the academic staff, everyone that helped get us prepared for the next step because honestly, the stuff that they teach us and the people that they bring in and the values that they instill in us, it really helps you for the real world because.”

He’d like to do his part in helping the next generation by sharing his experiences with the team, building a figurative bridge from where he’s been to where they can go.

“That’s something that I’ve been dreaming about! That’s something that I want to do outside of work because, honestly, I’ve seen how it comes full-circle for a lot of people,” he said. “I still talk to a lot of the guys on the team, especially the guys on the D-Line. Chris Martin is one of them. I talk with him night and day about future opportunities and what’s going on. It’s fun to see how his eyes light up whenever we talk about it. Honestly, addressing the team, getting a chance to come back, just do anything to be a part of Georgia Tech Athletics is truly an honor because they’ve done so much for me.”