Before sports in America went on indefinite hiatus late last week, four members of Georgia Tech’s 2019 football team took big steps in taking their talents from The Flats to the NFL in 2020.

It was a once-in-a-lifetime opportunity to display their potential as professional football players. Each of the Jackets’ “Fantastic Four” obliged and came through. 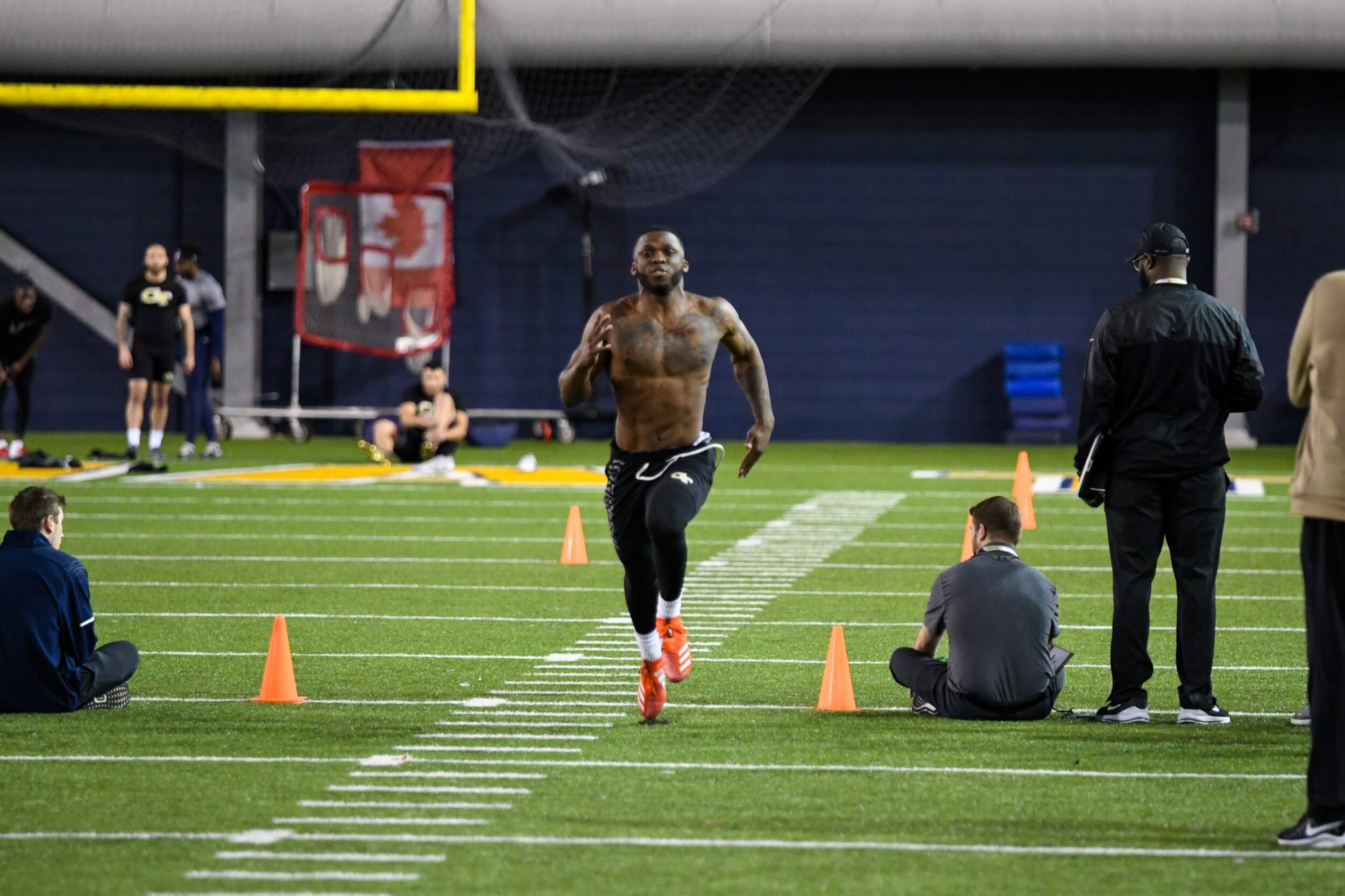 Christian Campbell was one of only two Georgia Tech seniors to see significant playing time on defense last season, and personified the versatility of the Yellow Jackets’ loaded defensive backfield as the team’s primary nickel back over the second half of the season. His mission on Pro Day was to show that versatility and prove he could fit anywhere and everywhere in a team’s defensive backfield.

“I think they really wanted to see how I can move. How you move is really key at the defensive back position,” he said. “So I know they were looking at how tight I could stay up in my hips and getting out of my breaks. I just wanted to show how well I could move in DB drills. I think I did that. I feel confident about today.”

Coming in at a solid 208 pounds — he finished the season around at around 205 — Campbell showed the form that led to him ranking fifth on the team and third among DBs in tackles last season (44). He got ready for Pro Day by training in Baton Rouge, La. with 13-year NFL veteran and former Pittsburgh Steelers All-Pro safety Ryan Clark.

“We (did) all the position work, speed work, weightlifting,” he said. “Basically, he’s been there, he’s done it, so we’ve been doing everything that we did out there [on Pro Day].”

About the only thing that took the smile of Campbell’s face was his being the only defensive back present once Durham was unable to participate. That allowed for little rest.

“It was tiring because after the one drill, it was right back up,” he said. “I wish there were some other DBs out there. It would have definitely helped. It was a little awkward but it felt good.”

He feels good about his pro football prospects, especially with his versatility.

“It definitely works in my favor because I’ve done nickel, free safety, strong safety, [in 2018] I was at outside linebacker,” he said. “So that all definitely helps me.” 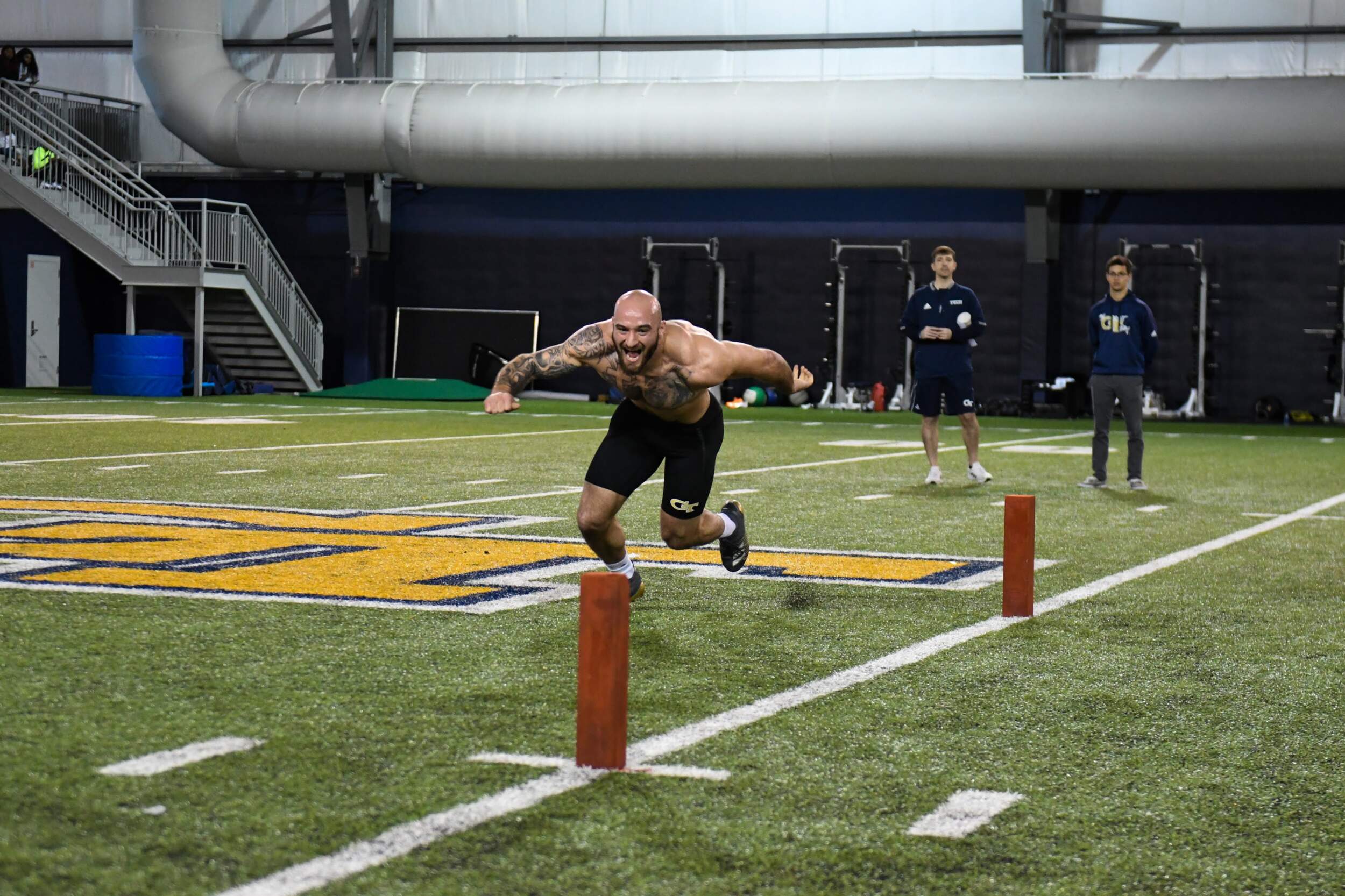 Nathan Cottrell proved willing not only to play any role that coaches gave him in his final season at Georgia Tech, but to be a perfect fit in his new primary roles on special teams.

That versatility and his willingness to embrace special teams was noted by the scouts.

“One of the guys, the first thing he said to me every time I walked up to do my testing was, ‘Special Teams demon right here,’” Cottrell said, with a laugh. “I was like, ‘Sure. I’ll take that.’ It was cool seeing that that’s a big thing that they’ve been looking at.”

The bench was especially rewarding, as it was a focal point during Pro Day training with Tech’s head football strength and conditioning coach Lewis Caralla and player development coach Edward Thompson.

“That was one of the things we focused on quite a bit in the weight room,” said Cottrell, who raised funds based on his Pro Day performance on the bench for the charity “Uplifting Athletes.” “I got 18. My goal was 15 because that was the most I’d gotten in the past. I got there and I was like, ‘I think I can do some more.’ So I just tried to grind out as many as I could.”

I am proud to use my Georgia Tech Pro Day performance to support @UpliftingAth and the #RareDiseaseCommunity. Donate for every bench rep I perform as part of Reps for Rare Diseases to raise money and awareness for #RareDiseases #WeTackleRare #RAREis https://t.co/CGjbwVMVGq pic.twitter.com/6aVickdqPa

Cottrell displayed his calling cards of good hands catching the ball, tough running and surprising burst of speed. Afterward, he also showed the kind of perfectionist attitude and resilience that made him beloved by his teammates and coaches. He was especially cognizant of a slip on the “L Drill.”

“I’m probably going to think about it for the next five weeks or whatever,” he said, allowing a rye smile to show through. “I was able to bounce back from it and move on into the next drill and keep showing what I could do. It was a hiccup but hopefully there were some other good things that they saw.”

Cottrell glowingly recalled talking with several teams, including the Detroit Lions, New York Giants, Pittsburgh Steelers and Atlanta Falcons, and feels he took advantage of the opportunity presented him.

“I never thought I’d even be in this opportunity,” he said. “Today went exactly as I was hoping it would go, honestly, other than a few hiccups but that’s kind of what you train for because whenever there is a mistake, you just keep going. Whether it was terrible or not as bad, either way you have to keep playing and keep going on to the next rep.” 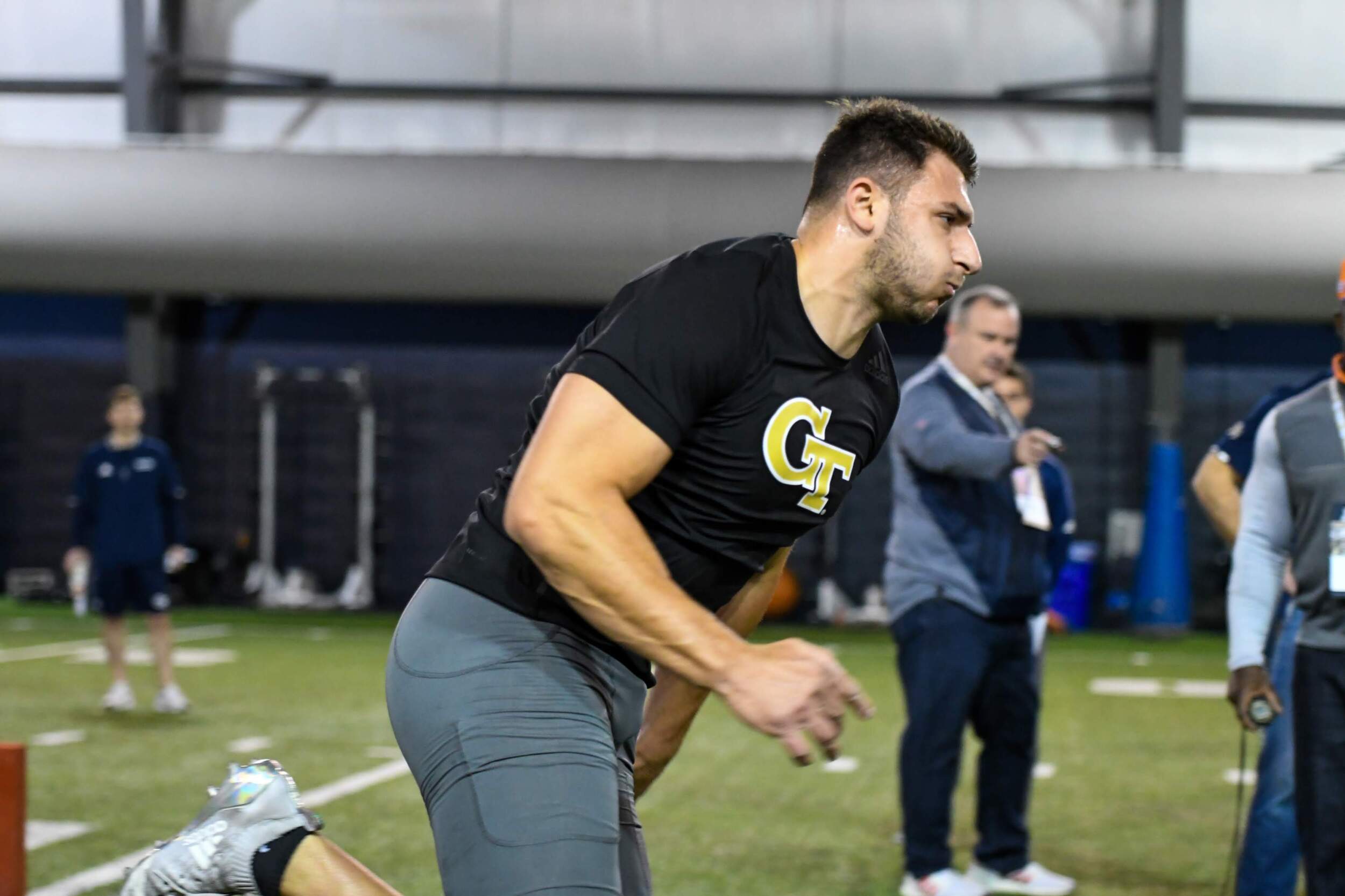 Tyler Davis had never given anything less than his all from his first day on the football field at Georgia Tech. He certainly wasn’t going to give anything less on his last.

“Absolutely, I left everything out there,” he said. “I’m really proud of the day. It was awesome to put the GT on one more time and be able to showcase myself. It really means the world to me, just what this place did for me the past year and how it will affect me the rest of my life.”

He hopes Pro Day will affect how NFL teams see him.

Davis, who trained at Los Angeles-based EXOS in preparing for Pro Day, also hit 9 feet, 5 inches in the broad and put up 23 reps on the bench.

“I just wanted to show them my athleticism. That’s something that I hallmark,” he added. “So just show my speed, my change of direction for these scouts. That last [pass] that went off my finger tips, that’s the one I wish I had back, but other than that I was really happy about the whole day.”

Davis, who had 17 receptions for 148 yards (8.7 per catch) with a TD as the first tight end on The Flats in 11 years after coming to Georgia Tech as a graduate transfer from UConn, was as pleased to listen to NFL representatives as he was to show off to them.

“Just to be able to talk to NFL coaches is awesome,” he said. “These guys are coaching some of the best players in the league. It was just cool to hear their perspective on things and just try to act like a sponge and soak it all in. It’s a day I’ll never forget. We worked so hard, all of us, to prepare for this day. It’s awesome that we did our thing and felt like we did really well, felt fast out there.”

The Pro Day results were a product of the work that Davis puts in to his development. 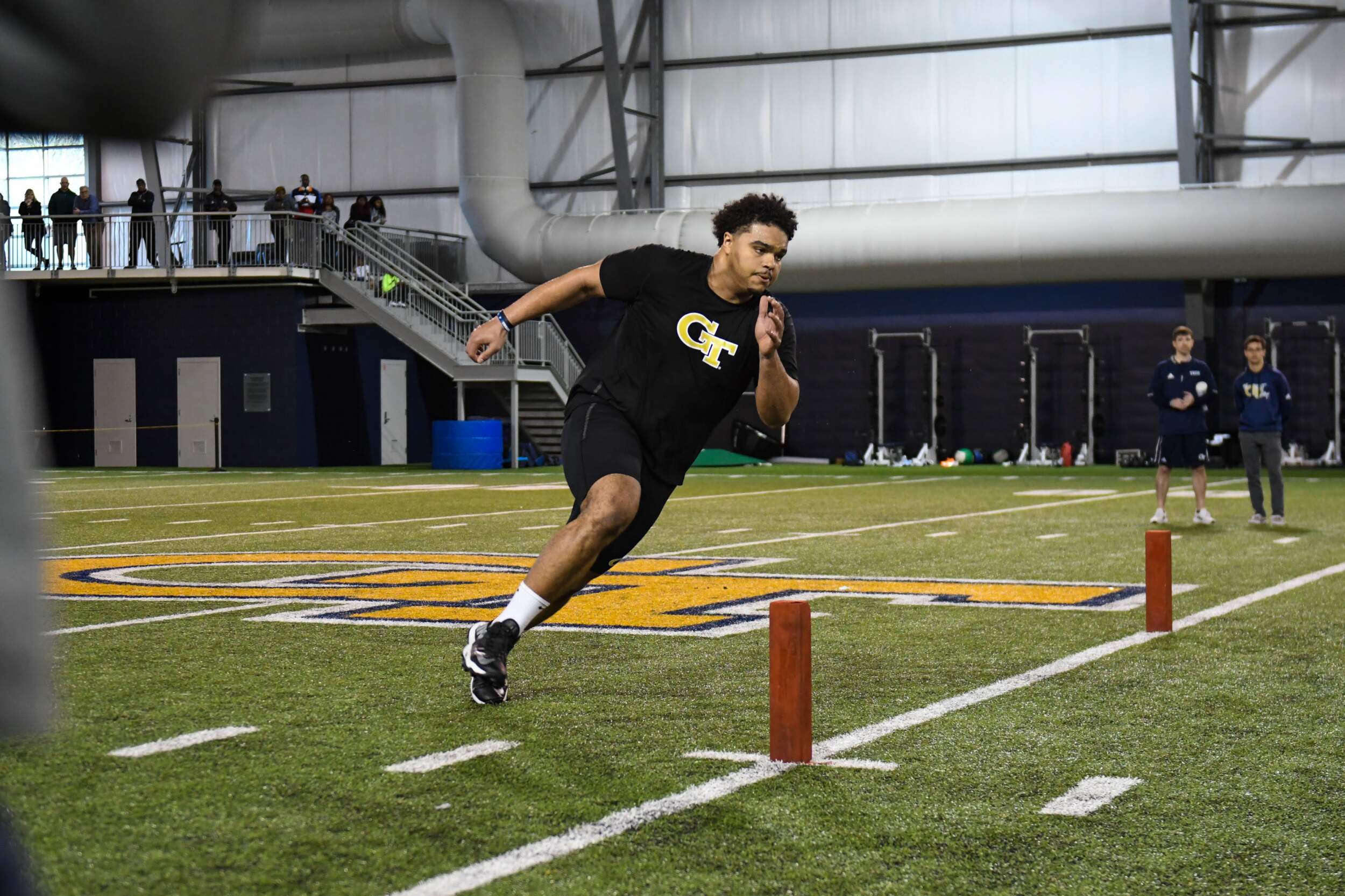 A little sleep the night before a big event can be a good thing. For Jared Southers, little sleep before Pro Day proved a great thing.

“I woke up earlier than I wanted to and then couldn’t fall back to sleep. I actually had a dream last night about doing all these tests,” admitted the 6-4, 305-pound grad transfer from Vanderbilt, who started all 12 games last season (three at right guard, nine at right tackle), as he helped lead the Yellow Jackets’ transition from an option-based offense to a spread, pro-style attack. “I was a little short on some of my goals on the testing, but in terms of the position work and the field drills, I feel I did very well. I definitely showed athleticism and bend, which is the biggest thing — just showing that you’re an athlete and you can control your body. Because at the end of the day, you’re a football player. You’re not a track runner.”

Ironically, a track runner — one of the greatest in U.S. Track and Field history, sprinter Michael Johnson — was a major factor in Southers’ preparation for Pro Day, where he showed superb dexterity and agility in his blocking drills, and put up a team-high 27 reps on the bench. Southers spent more than two months doing a multitude of cross-training at Michael Johnson Performance in McKinney, Texas.

“It was a great experience. It was a great group of guys down there, we all pushed each other and we all definitely got better,” he said. “I was 304 [pounds]  today. At the end of the season, I was somewhere between 312 and 315. So I lost about 10 pounds, felt a lot more explosive, a lot faster. So it was good. It was good for me.”

Southers will continue training in Atlanta. He certainly won’t lose sleep over his prospects for the upcoming draft. He feels his career speaks for itself.

“I talked to the Falcons’ assistant line coach for a while, the Chargers, the Giants, a few other teams,” he said. “Wherever I go, I go, but it’s definitely a good first step for me.”

The overall theme in the interviews after @GeorgiaTechFB Pro Day… it was a dream come true for these guys getting the opportunity to workout out in front of NFL Scouts. @nathancottrell5 @j_southers70 @Tyler_Davis9 @Its_Campbell pic.twitter.com/HcNCMTLwZz