#TGW: The Company You Keep

The following story originally appeared in the August edition of Everyday Champions magazine. You can read the entire issue here. Georgia Tech athletics held its annual Career Fair Monday evening, coverage of that event will appear on Ramblinwreck.com later this week.

The program isn’t actually new, but was revitalized in 2017 by director of athletics Todd Stansbury.

“The program’s been around for a while. It just wasn’t an official internship program per se,” said Maureen Tremblay, Georgia Tech Athletic Association director of executive operations. “The idea of calling it ‘The Fifth Street Bridge’ came because Todd Stansbury wanted to identify that many of our student-athletes are working in Tech Square, just over the Fifth Street Bridge on campus, and getting involved with some of the biggest corporations in Atlanta that are right around our campus and are very accessible to our student-athletes.”

“We renamed it ‘The Fifth Street Bridge Program’ two years ago and the program’s continued to grow from what it was five or six years ago to now having almost half of our student-athletes or more doing internships over the summer.”

During the summer of 2019, more than 100 student-athletes walked across the bridge and into company headquarters, receiving internships from Fortune 500 heavy-hitters like adidas, Boeing, Delta, Ernst & Young, Grady Hospital, IBM, NASA, RaceTrac and Waffle House. While the benefit of these internships to the student-athletes is obvious, employers have profited as well.

“For us, it’s an ability to ascertain and evaluate their potential,” said Tony Kepano, a vice chairman with advisory and transaction services industrial and logistics for commercial real estate giant CBRE, as well as a Tech alumnus (Class of ‘84) and a teammate of Stansbury on both football and track. His firm has hired redshirt-senior tight end Tyler Cooksey and senior volleyball middle blocker Kodie Comby as interns.

“This is something that we needed to do in the past, and I’m so glad we’re tapping into the Tech heritage and alumni base, because we have wonderful, gifted student-athletes,” continued Kepano. “The more they’re exposed to different alternatives, I think the better it is for these student-athletes, but also for alumni like ourselves, that can then witness and see the capability and value that these kids can bring to organizations. So I think it’s fantastic.”

“Ernst & Young has been recruiting from Georgia Tech for quite a while. We recruit across all the different schools,” said Courtney Adler, a 2001 graduate and former Yellow Jackets’ volleyball player (1999-2000) who is the current EY risk advisory practice and Southeast region attestation leader, whose firm hired senior tennis player Andrew Li over the summer. “I was an athlete at Georgia Tech and like to bring in Georgia Tech students and student-athletes to the firm as much as possible. I’m a little partial, but athletes have a unique layer of teaming and being successful. There’s a good transfer of the skills that you learn from being an athlete and being a successful professional. With that, I’ve recruited at the Georgia Tech Athletic Association several times, probably more in the past four or five years. We have tons of interns from Georgia Tech across the EY service lines.” 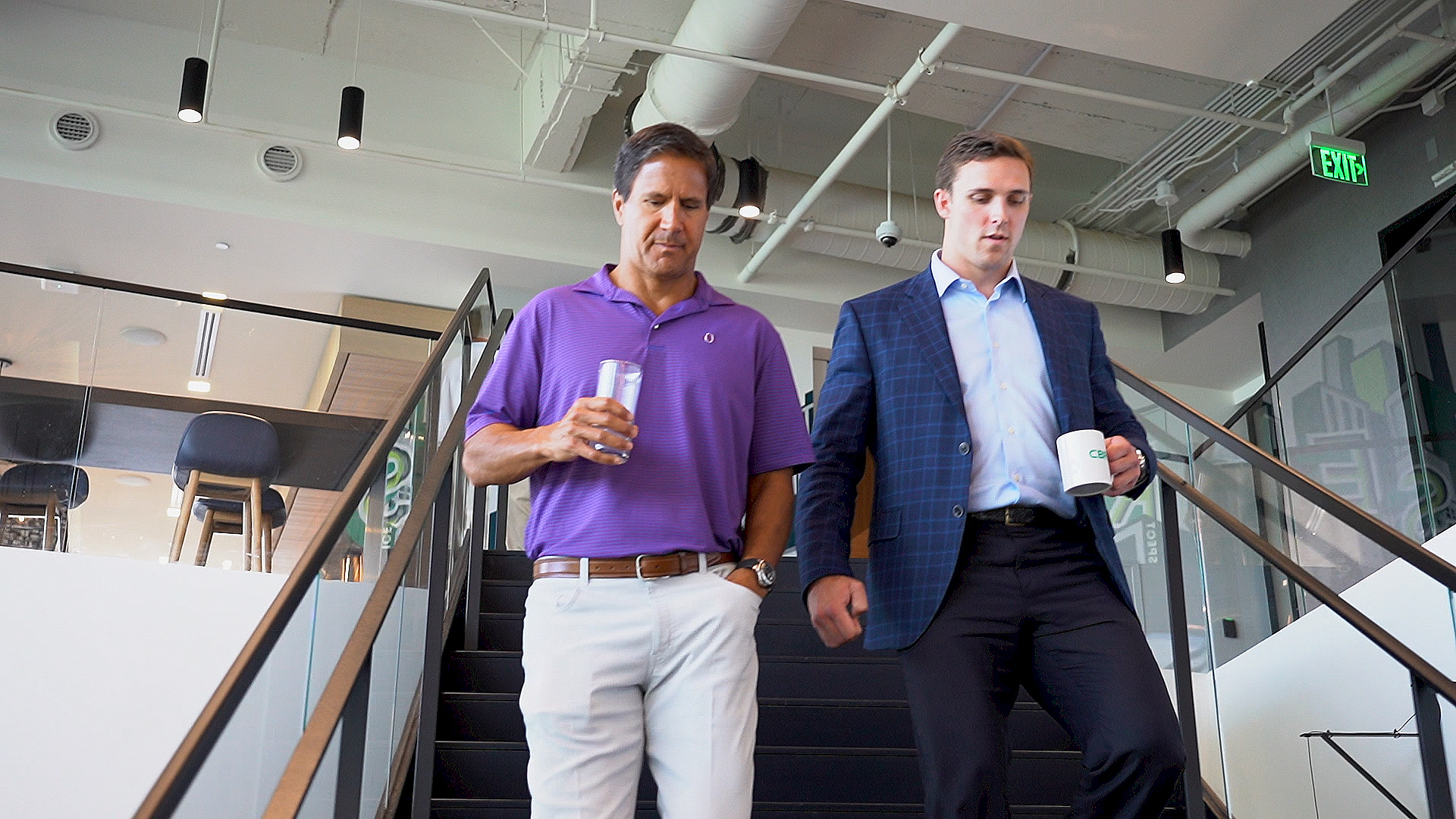 Not every satisfied hirer is a former Georgia Tech student-athlete. Some are just alumni.

Will Mizell is the vice president for Waffle House in the Greater Atlanta area and a 1987 graduate. He is proud of what has become Waffle House’s tradition of hiring Georgia Tech student-athletes. Though junior linebacker Jaquan Henderson became the first student-athlete to intern at Waffle House under the Fifth Street Bridge program, the company actually traces its roots and Georgia Tech ties back nearly 50 years.

“But because of the personal networking, you know what a great company it is. It’s more than serving bacon and eggs — although that’s what we do. It’s become a very large company, with almost 2,000 restaurants nationwide. There are a lot of things you have to do to manage that. There are a lot of people that you employ. So if you think of the food distribution, we have to think about menu design, there are a lot of Georgia Tech-type principles that get involved in running Waffle Houses. It’s not just one Waffle House. Try running 2,000 of them 24/7/365. So we’ve always had a good presence at Georgia Tech.”

Mizell hired Henderson then put him under the tutelage of former Yellow Jackets linebacker Marcus Harris, a December 2007 graduate who has been with the company ever since. Harris, who manages between 20 and 30 restaurants in Buckhead and Alpharetta, relished the mentoring role.

“We connected right away,” said Harris. “We all love football, but he understood that even though I think he has two more years at Tech, that if the NFL doesn’t work out, there has to be something to fall back on. He works really hard. He treated it like a real job. It was refreshing to see somebody kind of young, but thinking about his future. He’s definitely somebody that I can see talking to more moving forward. Even if he doesn’t come back with us, I told him that connection, the door is always open.” 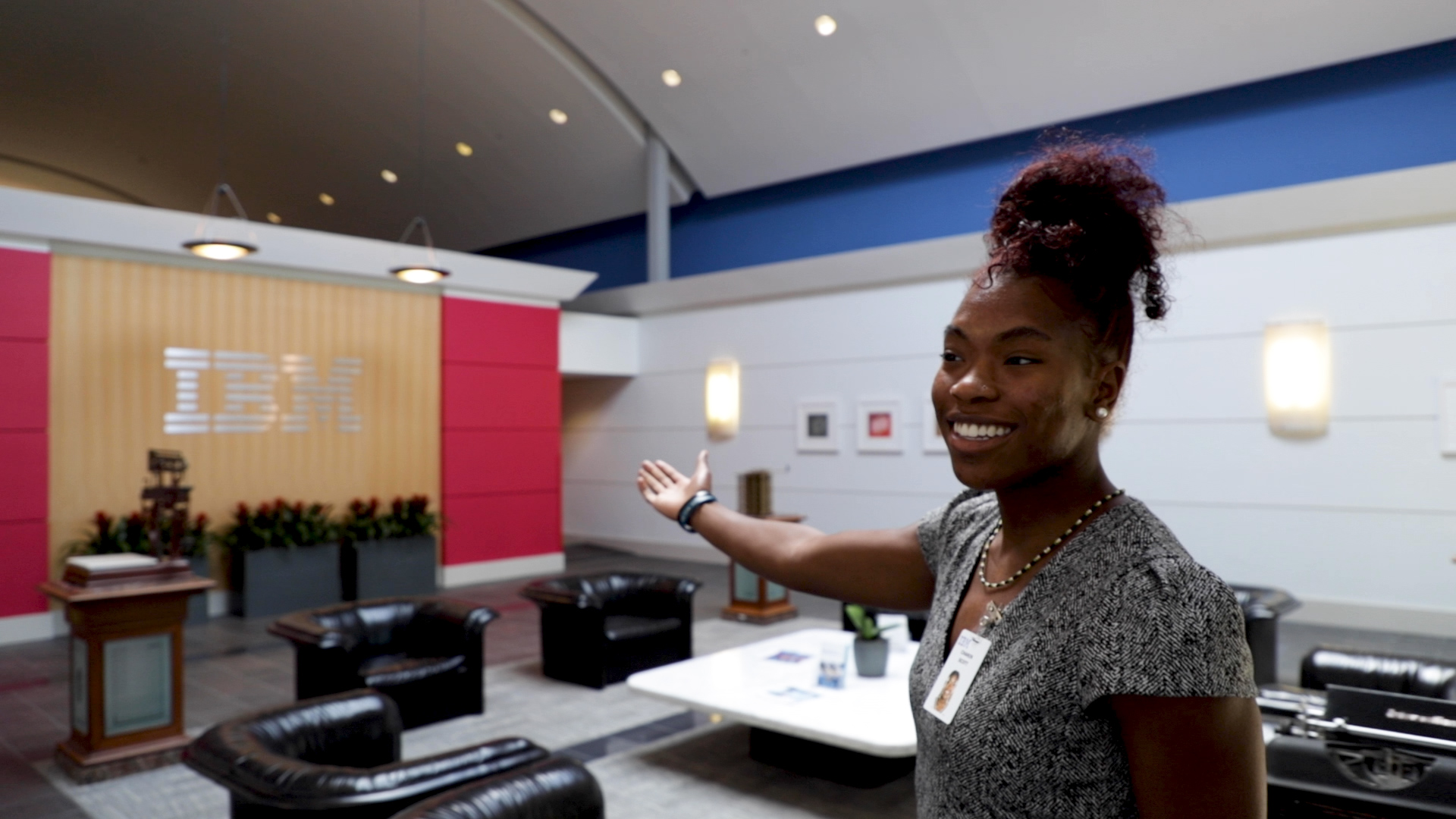 Thanks to the Fifth Street Bridge Program, doors are opening to student-athletes of all classes. Track/cross Country runner Haley Unthank was a rising sophomore when she got her internship at construction firm JE Dunn.

“We met her, and she blew us away. She was a freshman who came in really self-motivated,” said project manager Bryan Steed. “I, personally, was very impressed with her drive. She was all-around a great candidate.”

This summer, Unthank worked with a team that was building an extensive expansion of the Center for Advanced Pediatrics Center at Children’s Healthcare of Atlanta, a project Steed estimated at nearly $500 million.

Steed isn’t surprised to have found a quality candidate like Unthank at Georgia Tech. The company hired former football player Tyler Merriweather (Class of ‘18) as a project engineer in May, and Steed got his master’s in building construction from Tech in 2009.

“It’s an incredible resource and an incredible partnership,” he said. “They recruit a high-caliber student and student-athlete. You can definitely see the care that’s taken and the quality of people that they get in there.”

It’s the kind of quality people like Unthank and upperclassmen like women’s basketball player Chanin Scott (IBM) and sprinter Denise Woode (Boeing), who made strong first impressions in their first forays into the business world.

“I can tell you, a degree from Georgia Tech is highly, highly respected,” said Kepano. “It doesn’t matter whether you’re in New York or if you’re in California or Chicago or Dallas or Atlanta. The brand of the Georgia Tech degree has always meant high-achiever, high academics, and also rigorous training. What we see is that when kids come through the program, get the degree or experience what it is to be part of Georgia Tech’s student-athlete culture, it puts them so much further ahead in so many different areas than student-athletes from other schools.”

“It shows me if I’m going to be a student-athlete, the athletics department is not just interested in me being successful on the court, but me being successful in life,” Scott said. “That means that I need to be successful in school, in my personal life, know and be equipped to make the right decisions and be equipped to be a professional in something else if I don’t go pro in the sport that I’m playing. I think that really shows the school’s intention for its student-athletes … the concept of the Total Person Program.” 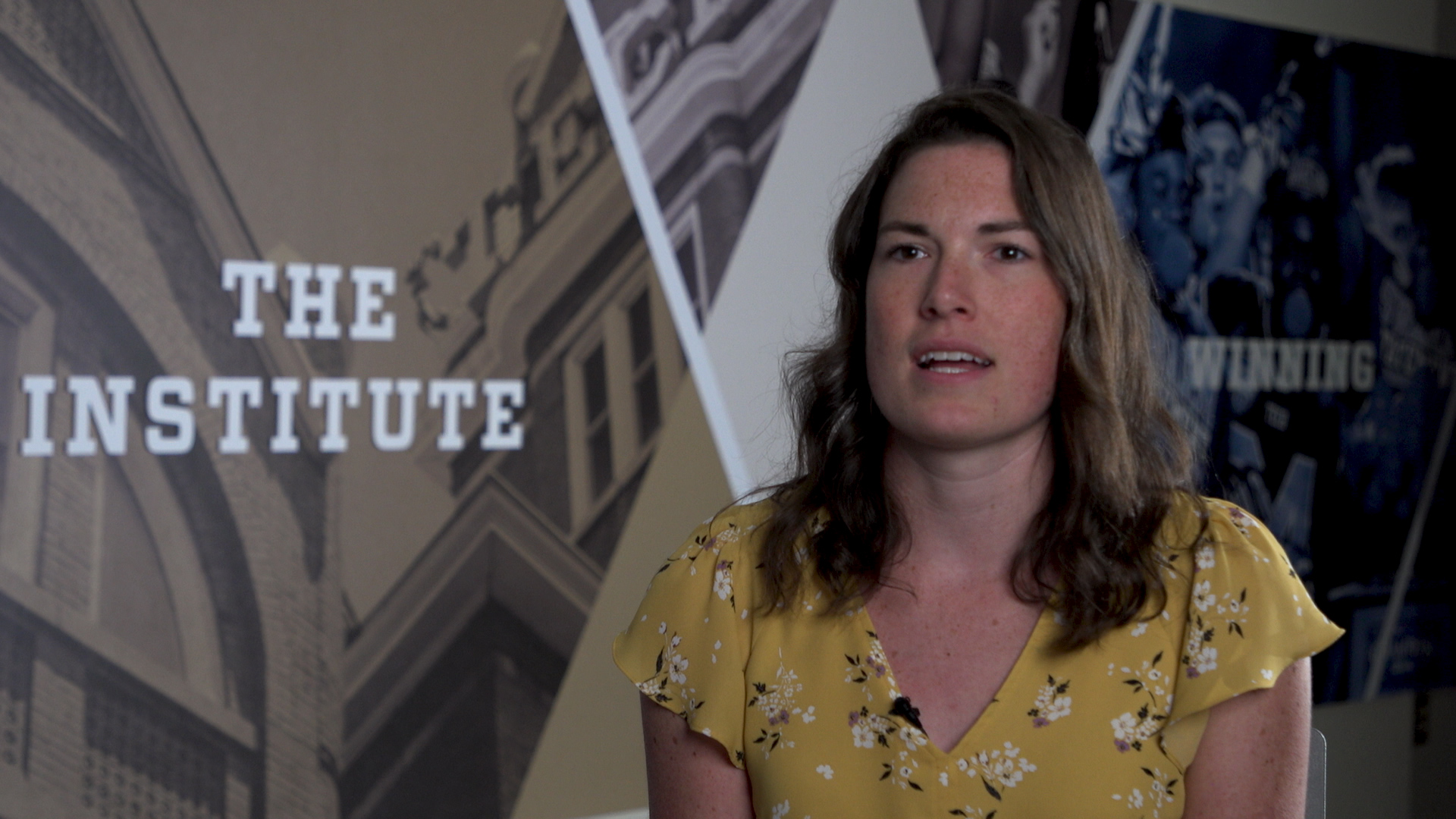 Maureen Tremblay believes that they may need to widen the Fifth Street Bridge to handle the overflow of traffic from companies wanting to take advantage of the program.

“We’ve seen [companies] wanting to continue to partner with us, but also companies that have potentially been involved just in a networking event, but then gotten to know a lot of our student-athletes. Then they want to build specific student-athlete internships from that exposure,” she said.

“For example, we worked with IBM this year on an internship experience and they’re wanting to continue to partner. RaceTrac, who we connected with last year, this year built out a micro-internship for our student-athletes, and moving into next year we’d like to get more of our student-athletes involved in these internship pipelines. So the continuation of those programs, to expand them with the companies that we’ve gotten involved with, they’re continuing to reach back to us and want more student-athletes because of the really high-caliber and quality interns that they had.”