The buzz for the start of spring football practice at Georgia Tech is again quite real, yet not because it will all be so fresh, loud and new but rather because the Yellow Jackets have grown older in all systems. Now, they’re ready to go from the jump.

When the Jackets take Rose Bowl Field on Tuesday morning for the first of 15 sessions running through the Spring Game on Friday night, April 10 in Bobby Dodd Stadium, they’ll know what to expect, or at least the vast majority of them will, and seven early-entry freshmen and graduate transfer offensive lineman Ryan Johnson will have been well tutored ahead of time.

So, instead of second-year head coach Geoff Collins and the staff walking players through new drills, pace of practice and gradually installing the nuts and bolts of a dramatically different offense and defense, players will hit the ground running.

No wonder Collins feels “a million percent” confident that the Jackets will get more done sooner than they did last spring, when everyone and everything was tearing through wrapping paper to get to business.

He’s already seen it. It’s right on the table, as players returned from holiday break and plowed straight into offseason strength and conditioning with familiarity gained in what has often been described as “year zero” of the Collins era. They’re moving faster, and players are bigger and stronger, too.

“It took us a long time to make sure (expectations) were ingrained in our guys and in our team. Then, you come back in January and all of our groundwork had been laid. Now, you’re actually getting to coach technique and fundamentals and the leadership component without having all the minutia. They’ve got all those things and now we can do more global, higher-level things because we’re so much further ahead of where we were last year.”

Tech will spread five weeks of spring practice over six weeks, which is new, by working six times in the next two weeks before spring break, and then nine more times – including the Spring Game – in three weeks after break.

Practices will be on Tuesday, Thursday and Saturday mornings, mostly, with the addition of a Sunday afternoon practice in week one, no Saturday workout next week as break begins, and the Spring Game on a Friday as the final session.

This spring will be less about installing systems, and more about tweaking. It appears there may be more adjustment on offense, where Collins anticipates Tech utilizing more run-pass-option situations than it did last season.

Why? That would be because players grew into the new systems last year, and coaches self-scouted after the season. They will eliminate some of what they did last year, adjust other parts and insert nuances in certain areas.

“We’re going to go and focus on the things that we’ve done really well defensively at a high level the last 10 years in our defensive package,” Collins explained. “We’re going to focus offensively on the things that we did at Temple in the two years that we were there. Two of the best three years in Temple history were the two years that we were there, so we’re taking those things and trying to apply them here and just try to do them much better . . . “

Coach said Tech this spring will also begin a transition toward greater responsibility for players to make more calls on the field in games, rather than always taking straight orders from offensive coordinator Dave Patenaude and defensive coordinator Andrew Thacker. Translation: more audibling.

“There will be some things that we will be able to add that we weren’t able to do last year. We had to rely on coaches handling everything, to get us in and out of the ball on both offense and defense,” Collins said. “I think in through spring ball it will be more autonomous where the guys can control it. There will be more RPO.”

There will be subplots, like mapping players who are perhaps in line to change positions. Players injured last season will work gradually back into the mix.

For some, the work will be new.

Seven Jackets graduated early from high school and are on campus already as part of one of the two most highly-regarded recruiting classes in Tech history.

They’re getting up to speed before the first practice, and fast.

“I think two of the hardest positions to be able to come in on a short time frame and play are offensive line and quarterback. The nice thing is we had five guys that came in at mid-year (at those positions)  . . . ” Collins said. “Jalen Huff has already put on 18 pounds since he’s been here for two months. He was able to bench press 185 pounds two times when he got here in January. He’s now benching 225 pounds seven times. So getting those guys here early, that’s beneficial.”

New players figure to get plenty of opportunities in spring practice, as Collins and his staff are not yet concerning themselves with building the Above-The-Line chart.

“Every single player on our team gets comparable reps … we consider ourselves a developmental program. So (on other teams), those guys that are standing on the sideline are not developing. We don’t do that,” he said. “Every single player in our program, from a fifth-year senior that has started three seasons of his career to a freshman walk-on, they’re playing football. (Walk-on wide receiver) Josh Blancato was a really integral part of our special teams and offense last year. We would have never know what Josh Blancato could do if we didn’t have the philosophy that we have. 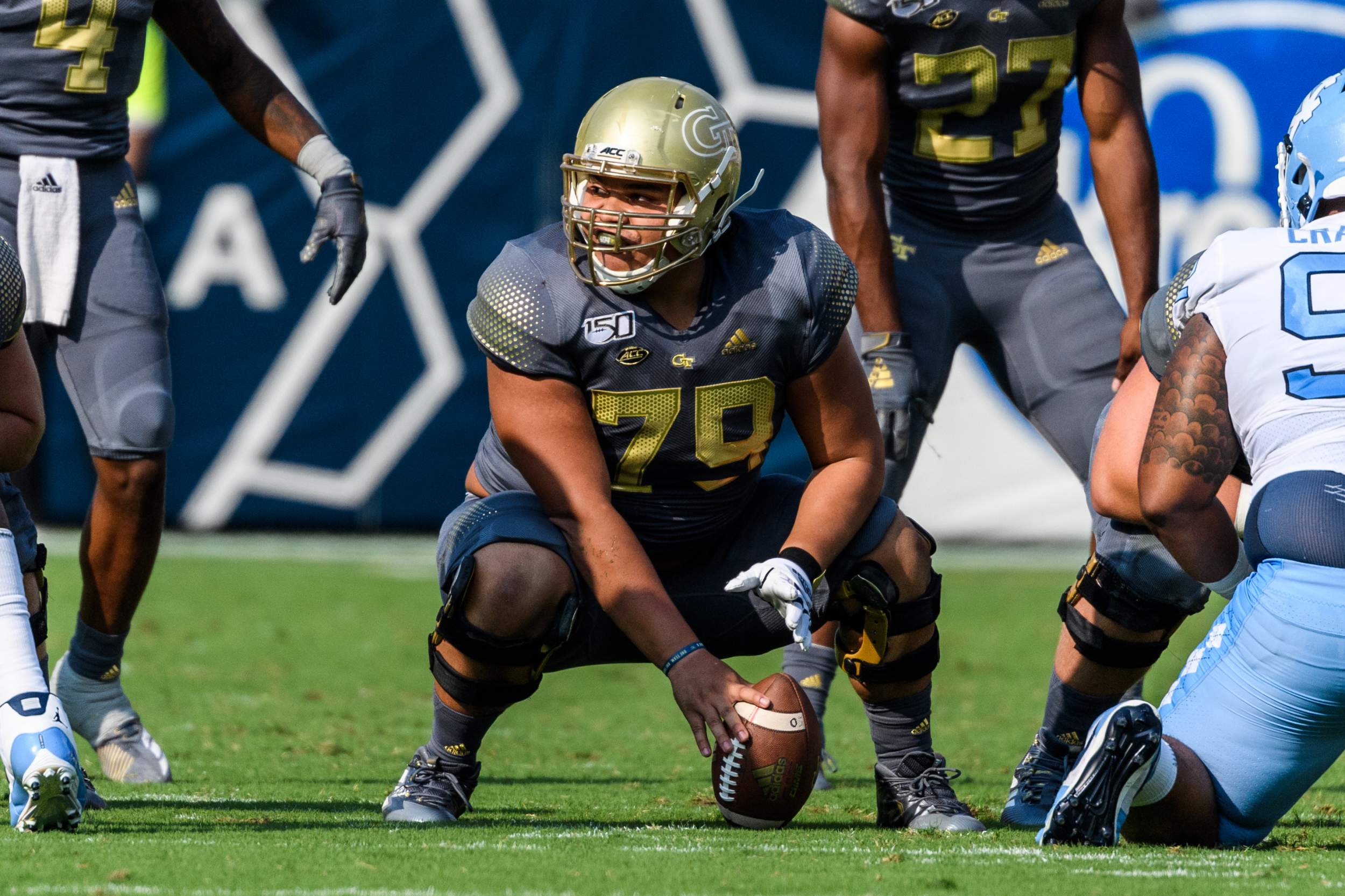 “(Walk-on) William Lay (above) was a starting center for us in eight games last year. Djimon Brooks, a walk-on, started several games for us on defensive line . . . we would’ve never found those guys and we would have never been able to integrate them into our special teams, offense and defense packages. So, we take a lot of pride in our development.”

For now, the Jackets are working everybody with just one contest in mind – the Spring Game.

Again, there are big plans, as Tech will have various forms of entertainment and engagement available for fans on the night of April 10.

“We had the DJ playing the entire time. We’ll have some things that will be released as we get closer to the game that are going to be really fun, but I know it’s going to be on the ACC Network, which is an ESPN entity, so we will have that,” Collins said. “We’re going to give (fans)  access, moreso than they’ve ever had on the field, in the huddles – well, we don’t huddle, but in the middle of the action. It’s going to be tremendous.”