No one knows exactly how college athletics will look once the COVID-19 pandemic plays out.

Similarly, no one knows how the student-athletes will look when they come back to campus and try to return to what was “normal” life in the classroom and on the field.

While they wait, Georgia Tech football has gone out of its way to stay connected. The staff holds daily virtual position meetings, and strength and conditioning coach Lewis Caralla posts innovative and challenging workouts.

But, especially at times like these, no one knows the players better than family members.

As the Yellow Jackets prepare for what they hope is the 2020 season, Jalen and Jamal Camp, Ja’Quon and Jamious Griffin and Tre Swilling and Bruce Jordan-Swilling are experiencing the kind of support that can only come from a sibling. The three sets of brothers, which, interestingly, are each composed of players lining up on opposite sides of the ball, are taking advantage of that and making the first step toward playing big or bigger roles for the Jackets.

“We push each other a lot,” said junior cornerback Tre Swilling, who is home in New Orleans, with Bruce, a senior who is switching back to running back (the position he played in high school) after playing three years on Tech’s linebacking corps. “If we’re not around each other, that’s when the weirdness will kick in, because I’m used to him always being there and spotting and working out with him. So that part feels normal. It just feels like we’re home for the summer, like an extended summer vacation.

“Probably seventh or eighth grade and ninth grade even, until we graduated, we were always trying to figure out a way for us to get better,” he added. “It’s kind of that same nostalgic feeling, as far as we’re chasing something. It brings you closer because you’re with him every day. You see him struggle, you see him fail, you see him succeed. The easiest way to find out about somebody is to be there when there is some adversity and see how they respond.” 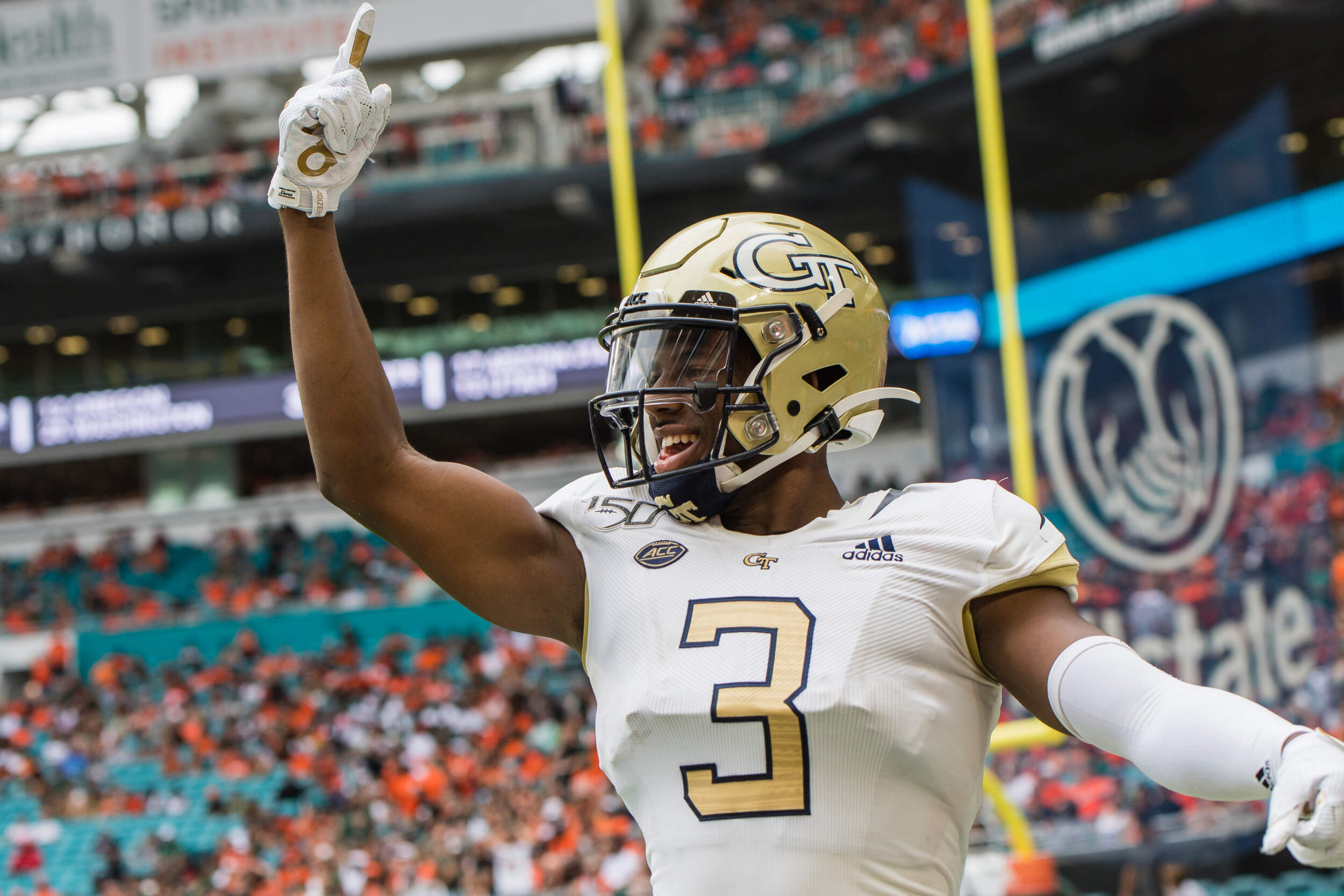 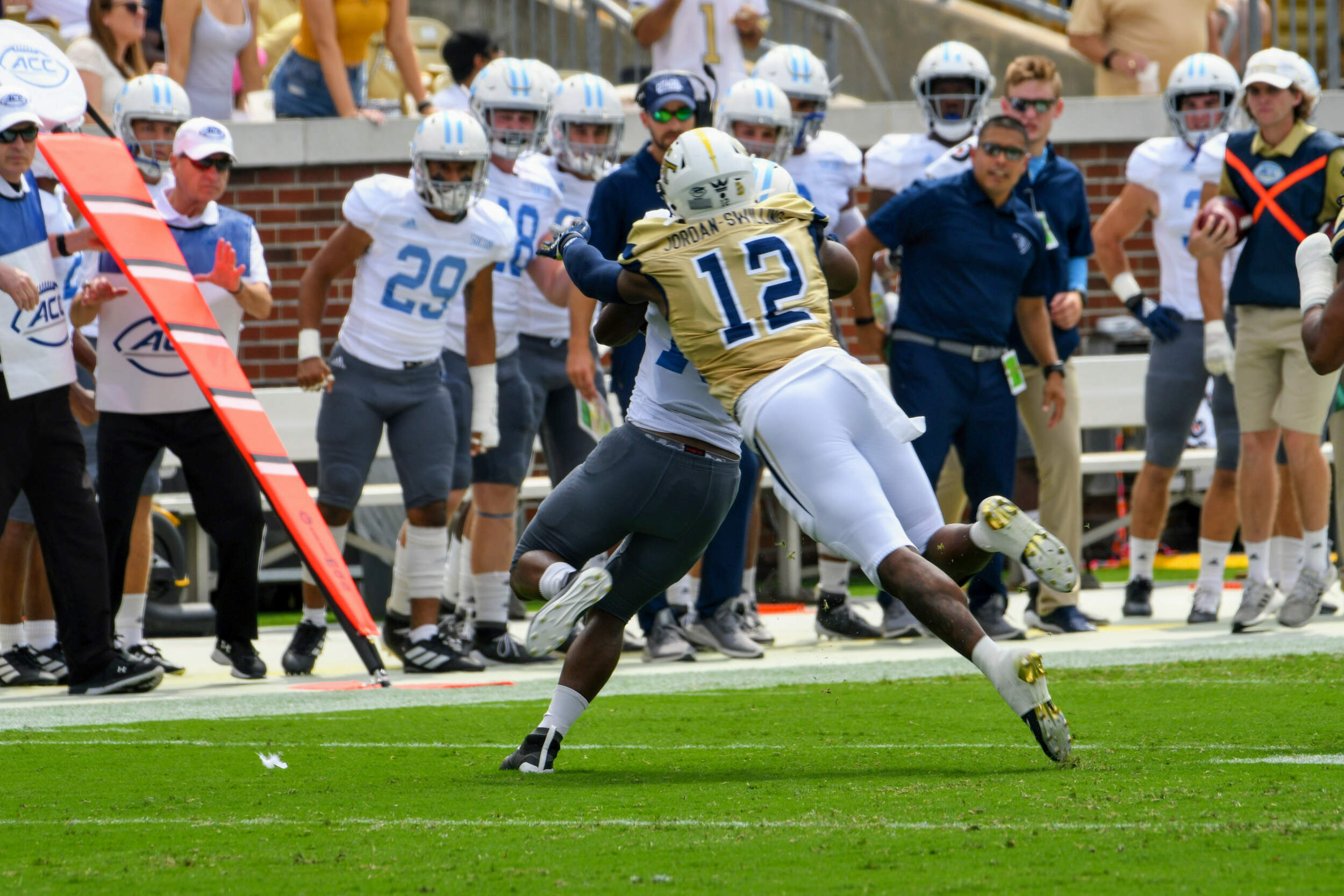 “We’re really competitive,” Jalen said. “I’ve had the upper hand, I would say, since I was in high school up until maybe this past year. He’s starting to slowly get to me, which is disappointing. But he is a D-lineman. My dad always tells me, ‘You’ve got to know, he is a D-lineman, you’re a receiver.’ I’m not trying to hear any of that because I’m still ‘Big Bro.’”

“I am trying to catch him,” admitted Jamal, with a laugh. “For some reason, I can catch him on strength, but then whenever we wrestle, he has that ‘big brother strength.’ I don’t understand it, but it’s cool.” 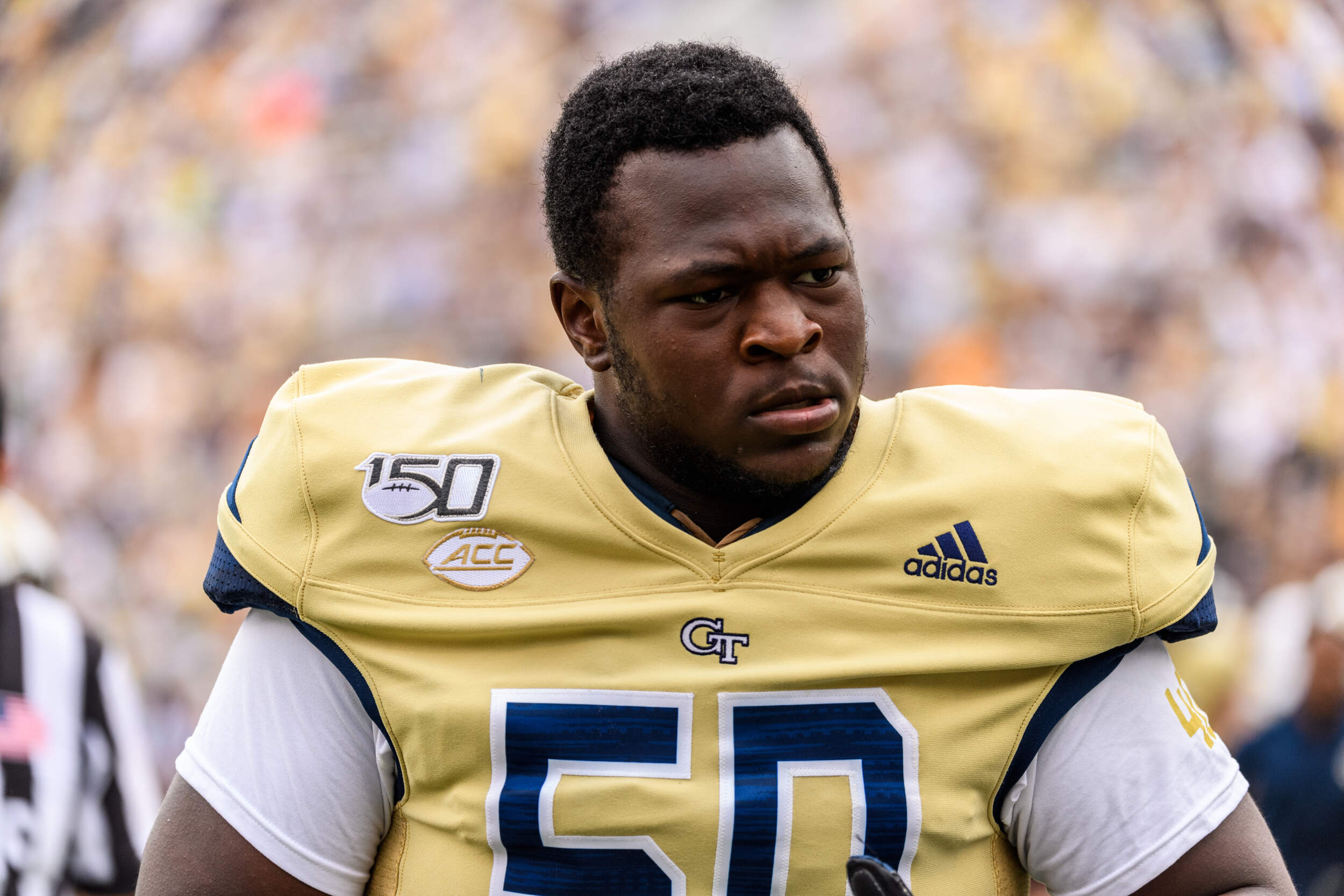 Jamal Camp (50) will enter 2020 as a redshirt freshman after redshirting in 2019, cutting his teeth with the defensive line and learning under defensive line coach/defensive recruiting coordinator Larry Knight.

Jamal is perfectly fine following Jalen when it comes to how he handles himself.

“I always try to follow his footsteps,” Jamal said. “He always leads by example. It’s definitely a blessing to work with him and have him to show me the ropes and show me what to do and what not to do. He definitely pushes me. We push each other, though. To have a brother in the house, we know how to stay focused, we give ideas to each and gain ideas from each other. We feed off of each other, so that works tremendously.”

Completing the trio of brothers are Ja’Quon and Jamious Griffin. Each looks to improve on the contributions they made last year — Ja’Quon, a sophomore defensive lineman, had 3.0 tackles for loss and 2.5 sacks among his 14 tackles (six solo), as well as a fumble recovery for a touchdown in 11 games, while running back Jamious got his feet wet as a true freshman, carrying 37 times for 125 yards, making two catches for 11, and even notching a tackle in nine contests.

They’re home in Rome, Ga. and working out at The Goat Factory, where the motto is “Why settle for ‘good’ when being ‘GREAT’ is an option.” Jamious has posted some of his workout videos on his Facebook page. 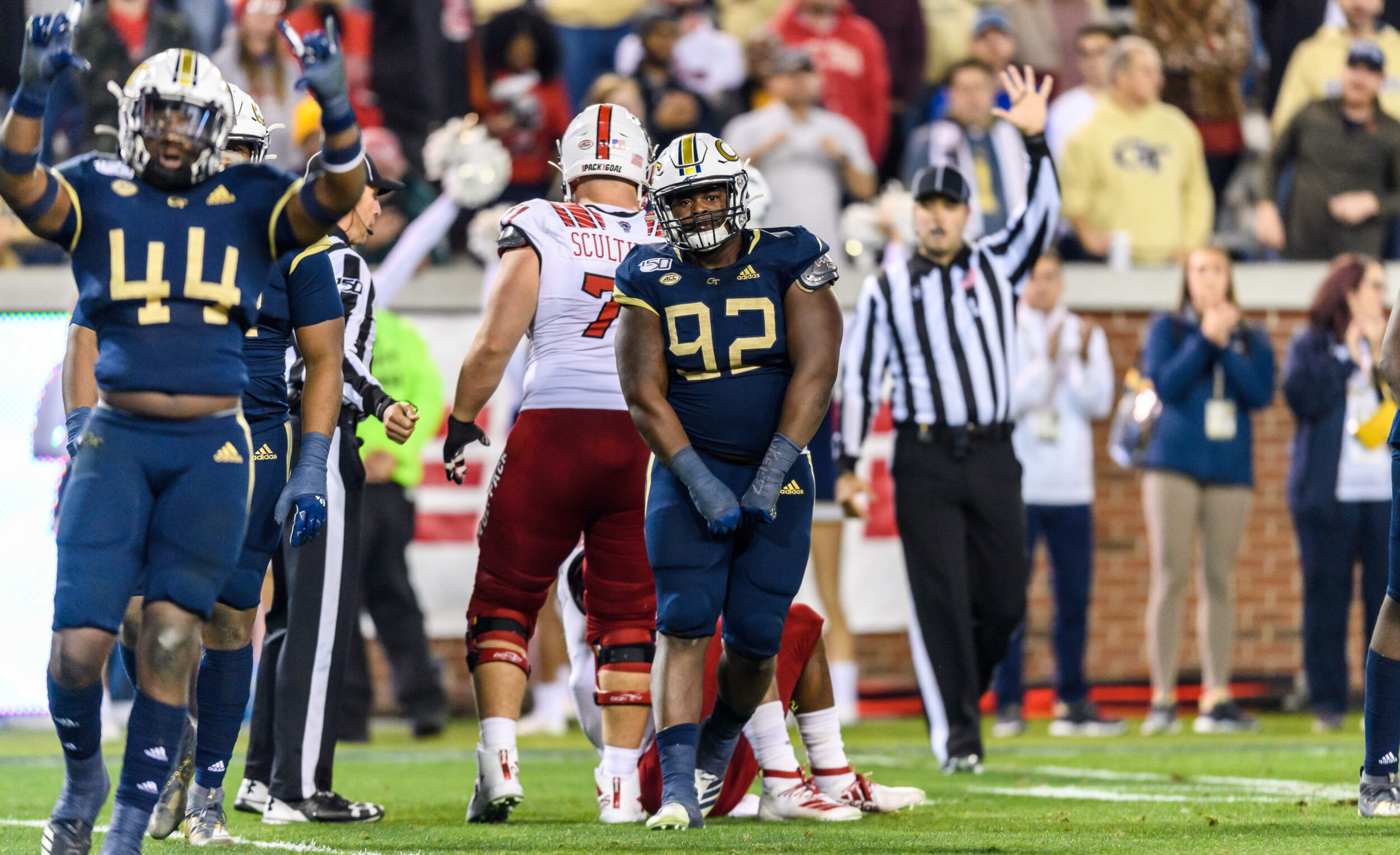 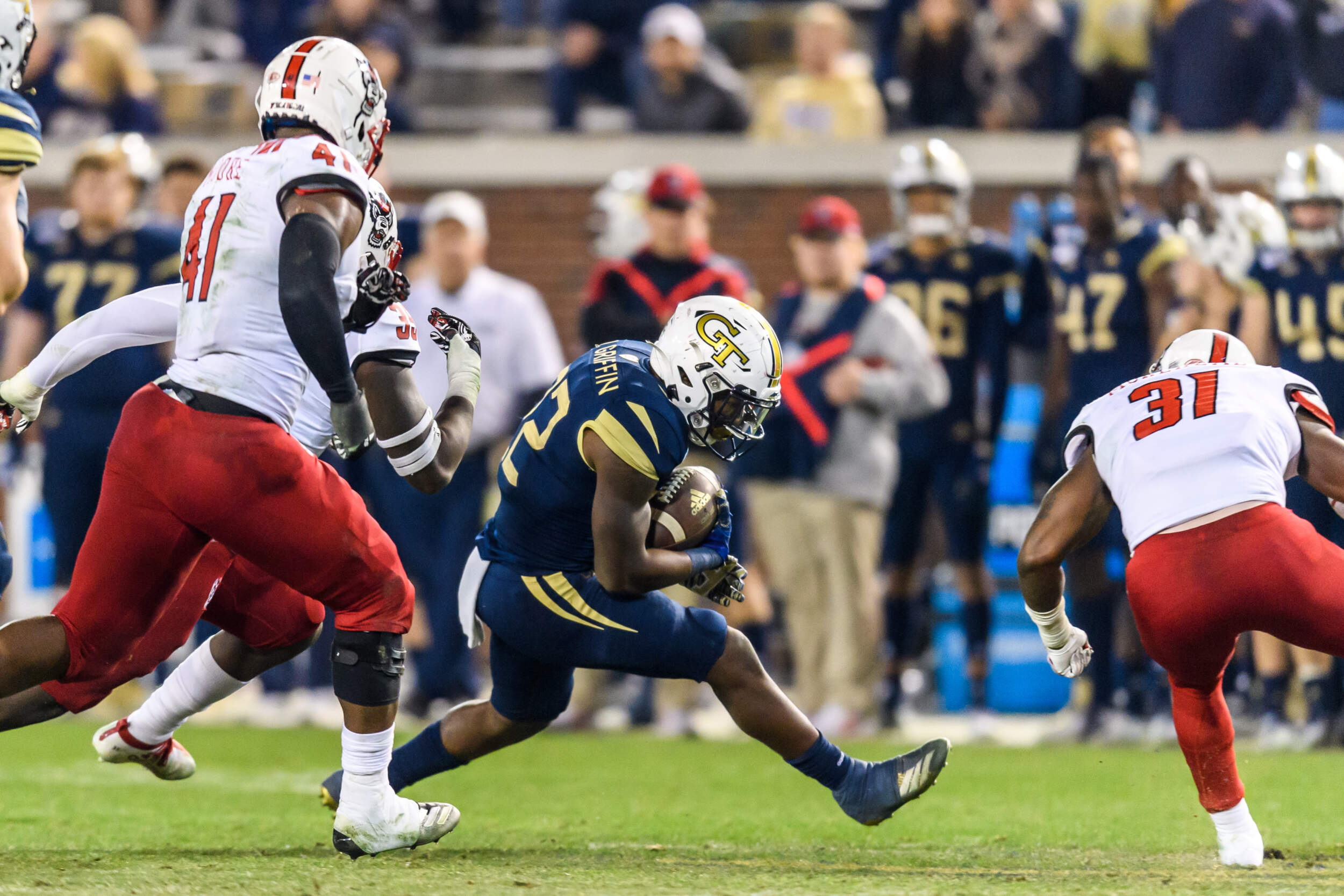 Top photo: Ja’Quon Griffin (92) will enter 2020 as a redshirt sophomore after a breakout 2019 season. He appeared in 11 games last year, amassing 14 tackles, 3.0 for loss and 2.5 sacks, but saved his best for his fumble recovery in the endzone at Miami (Fla.) en route to the thrilling road victory.
Bottom photo: Jamious Griffin (22) will enter 2020 looking for more after finishing second among running backs in total rushing yardage, gaining 125 yards on 37 carries in just seven games.

The Camps also have the luxury of a gym in which to work out together and the added advantage of it being owned by their father, Richard, who played college football at West Georgia and is a certified trainer.

“My dad is really good at it. I get my money’s worth every day I go in there,” said Jalen. “We train with each other every day — Monday, Wednesday, Friday in the weight room,  me and (Jamal) bench pressing together, all that kind of stuff — on Tuesday and Thursday, he’ll be out there on the field working on his technique, while I’m doing my drills.”

The Swillings didn’t have a gym, so they created a make-shift one in a somewhat unusual place.

“We’ve had a little small bench and different things at my home. My older brother actually moved them to my mom’s daycare, so we’ve been in there,” Tre said. “No A/C. There are no mirrors in there; you can’t watch yourself in the mirror. It’s not super-duper nice, there’s nothing glorified. It kind of brings you back down and humbles you a little bit. It makes you appreciative of when you do go to school and you have those things. It just kind of feels real.”

That ability to adjust paid dividends when he had to travel to Atlanta to clear out the apartment he lived in this past academic year.

“I had to get creative and do extra running and put stuff in a backpack and do workouts with bands in my living room, do abs,” he recalled. “I had one of my little cousins with us and put him on my back and was doing pushups — he weighed about 45-50 pounds. So we had to use what we could at the time, given the circumstances. There were no gyms open, I didn’t have anything in my apartment so it was ‘use anything we could.’ It was just like we’d see our strength coach Lew Caralla do. He’s doing these videos, he has this backpack on, he has a baby on his back or something. He’s getting creative so it all kind of trickles down and it’s helped us be more creative and competitive throughout the whole process.” 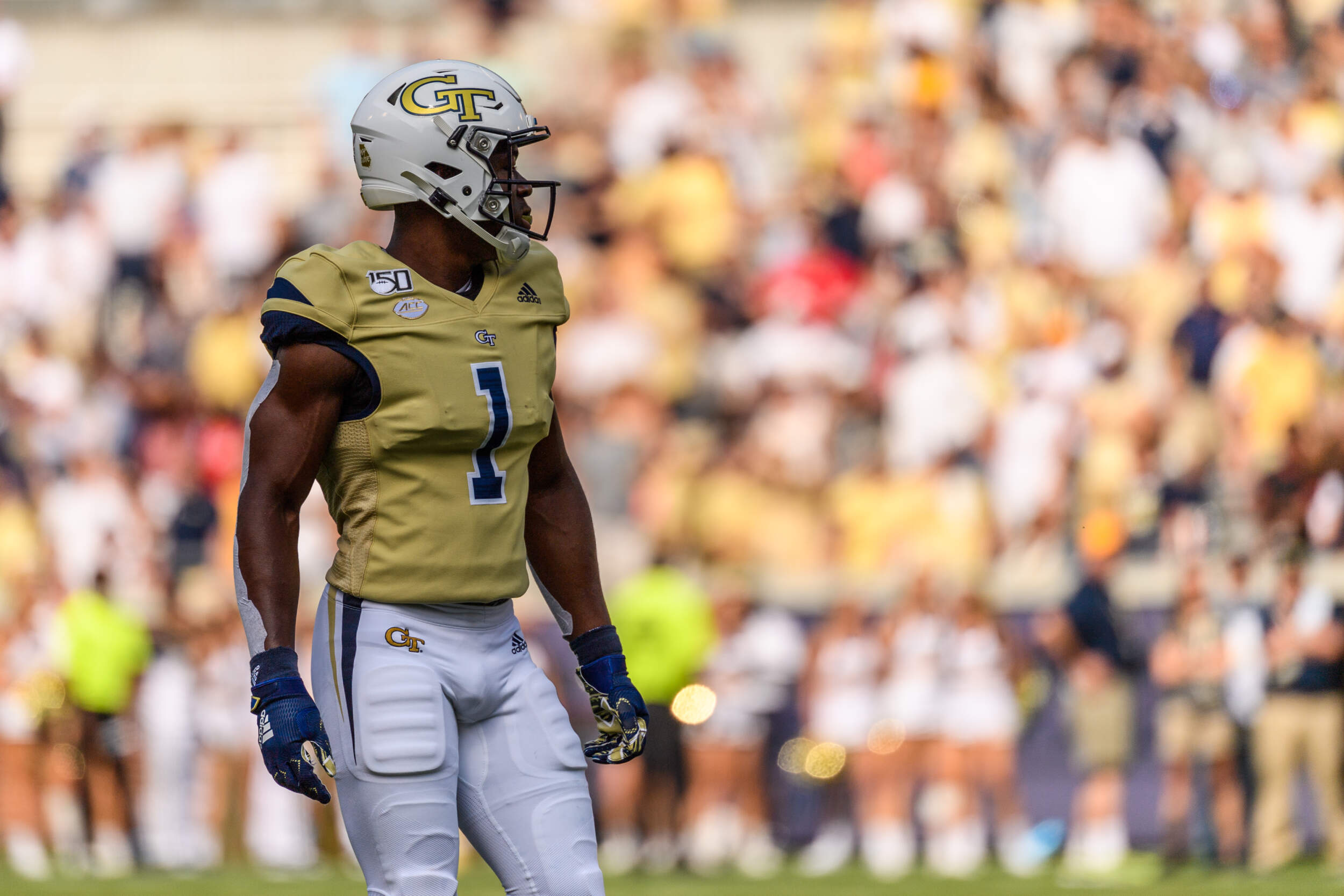 Jalen Camp (1) will look to make 2020 one to remember after a injury cut last season short. Still, despite playing in just four games, Camp hauled in seven passes for 134 yards and one touchdown.

Caralla’s dedication and ingenuity in creating fresh and interesting workouts has benefited the entire team and made every day an exciting adventure. Swilling has found Fridays especially fun.

“Every Friday, Coach Caralla gives us some special themed workout, which is an unbelievable workout every time,” he said. “There was a Mother’s Day list. I’m sure we’ll have a July 4th list if we’re not back by then. Anything he can think of that’s closely related to the time that we’re in, we’ll have a themed list behind it. Recently, we had Tyler Davis and Nate Cottrell get picked up by the (NFL’s Jacksonville) Jaguars. Their numbers were 9 and 31, so we had something like nine different sets of 31 different reps or something like that. Just something creative that makes it fun and also be able to give us the perspective about the change that we’re able to get if we continue to work hard and get an edge on people.”

Yet, even with the most creative of Caralla’s workouts, there are still days when it takes something extra to shake the doldrums. That’s where the push that can only come from competing with your brother comes in.

“We all have those days that we don’t want to get up and do something. It’s been easier for us because we have each other here,” said Swilling. “When I don’t feel like working out, he’s right there to tell me, ‘Let’s go do it!’ If he doesn’t feel like working out, I’m right there to encourage him. But we also know the goal at hand. So even when we don’t want to work out, it’s not hard. Nowadays, you click on Twitter and you see projections about other different players and things like that.”

While the endgame is to give Georgia Tech an advantage, there’s also some pride in being the best brothers once practice resumes.

“We try to be the best pair on the whole team. That alone is a motivator,” said Jamal. “But to have everybody coming together as a team, that’s huge. With Coach Lew and his workouts and what we’re doing in our homes and the position groups, everything like that, hopefully once quarantine ends, we can be a dominant force in the ACC and all of college football.”

“We want to be the best and the strongest force individually, so I think going against them and knowing that there are other people like Ja’Quon and Jamious and [Jalen and Jamal] on the team, it just keeps us going and pushing,” said Swilling. “Jamious and Ja’Quon are on different sides of the ball, Jalen and Jamal, Bruce and I as well. Bruce wants to be the best at running back on his side of the ball and I want to be the best on my side of the ball and at corner. So those competitions are really fun. They usually put us against each other in certain two-man things at school. It’s just something cool to deal with.

“We talk trash all day,” he added. “We talk stuff all day, just kind of get the most out of each other.”

Jalen agrees there is incentive to be the best but stops short as far as volume and frequency of trash-talking — his younger brother notwithstanding.

“It’s definitely a big pride factor but we don’t really get into it with the other brothers on the team,” he said. “It’s just something that we hold among ourselves in terms of getting as much of the upper hand as we can. While we have this off time, get in the best shape possible. Make sure we’re all staying in shape, so when we do get back, we’re not trying to catch back up to all these other schools.

“I wouldn’t say we do all that (trash talk),” he added. “We just know it’s something we can keep in our household, just competing with each other. That drives us a lot.”