There are a lot of ‘What if’s’ surrounding the 2018 Georgia Tech football season. What if the Yellow Jackets had finished at South Florida? What if they’d played better in the first half at Pittsburgh? What if they’d held onto the ball in a doomed 1:49 stretch of the third quarter against Duke?

With Saturday’s 27-21 win over Miami, a new and very different ‘What if’ has come into focus: What if people stop and appreciate what Georgia Tech has done over the last six weeks?

Since being left for dead at 1-3 following the 49-21 loss to Clemson on Sept.22, the Jackets have arisen from the ashes like the mythical phoenix and head into their final ACC game Saturday against Virginia at Bobby Dodd at 6-4, having earned bowl eligibility. With a win on Saturday they can finish second in the Coastal — a division where six weeks ago, following the Duke loss, they were second-to-last.

“It’s been a lot of clawback,” said head coach Paul Johnson, who will earn no worse than a .500 ACC season for the 10th time in his 11 years. “I’m happy for the kids. It’s something they wanted to do. I told them after the game, ‘We weren’t just trying to get to six. You have to six before you can get to seven or eight or whatever.’ We’ve still got a lot to play for. We’re playing a lot better now than we were early in the year and we kind of dug ourselves out of the big hole we dug ourselves in.”

Following the devastating 28-14 loss to Duke on Oct. 13, the Jackets were 3-4 overall, 1-2 in the ACC. Outside of the locker room, consensus was the only packing the team would be doing following their Nov. 24 game at Georgia was packing for next season. Inside the locker room, however, was a different story.

“I think it’s easy to shut it down after being at a point of 1-3. It’s easy for a team to kind of throw in the towel and just play as an individual,” said senior wide receiver Brad Stewart, who caught his second touchdown pass of the season on Saturday night, a 31-yarder with 5:27 left in the third quarter that proved to be the game-winning points. “That shows [our] brotherhood: ‘Look, no matter how bad it’s going, we’re staying together. We’re going to do this.’” 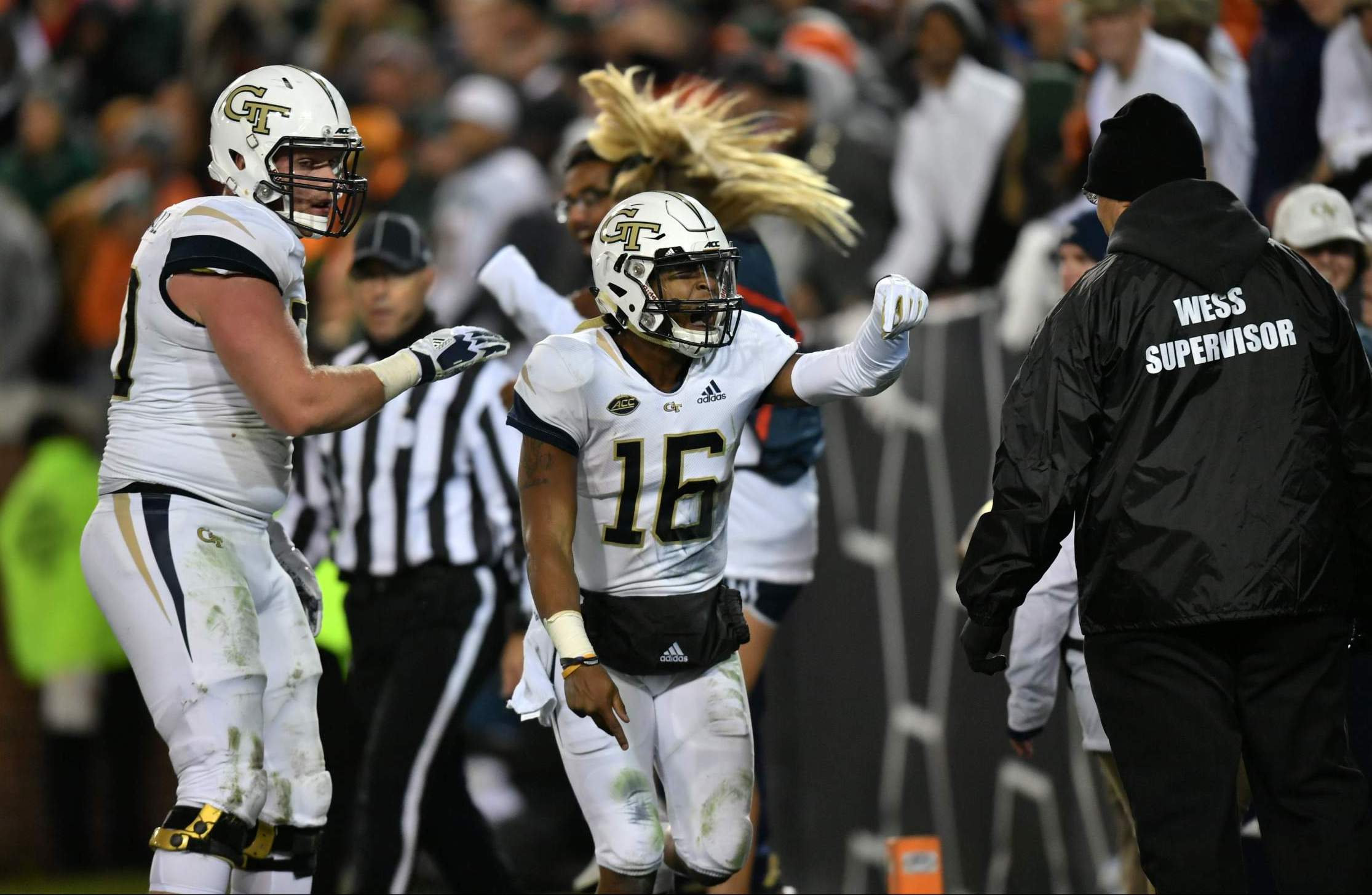 The Jackets did what they needed to do, especially down the stretch, something they were unable to do last year at Miami. There even was a parallel situation: on third-and-6 at the GT 35-yard line with around six minutes remaining, quarterback TaQuon Marshall (above) dropped back and threw downfield. Unlike last season, when he and Stewart didn’t connect, this time the ball found the mark and junior wide receiver Jalen Camp pulled it in for a 22-yard gain. The Jackets extended what would be a game-ending drive, killing the final 6:43 to seal the win.

“It’s kind of crazy because we were in the same situation last year to ice the game,” said Marshall. “It was a little nerve-wracking going into the play. I just knew that we had to have something happen, something to go our way. I saw that Jalen didn’t get a clean release, but then I saw him look to the inside and look at me, and I knew we were on the same page. I knew I could put the ball in the air in the middle and let him go up and get it. He made the biggest play of the whole night.”

There were other candidates and other big plays, as well as plays that tested the Jackets’ resolve. On Miami’s first offensive play of the game, Miami wide receiver Jeff Thomas caught a pass for 27 yards. Ten plays later, Miami was up 7-0.

“The first time out I got kind of turned around, it was an easy catch,” said Swilling, who finished with two pass breakups, one on a post late in the second quarter, when he closed, lunged and deflected what would have been a game-tying touchdown to Thomas. “After that, I wanted to continue challenging and competing.”

The offense picked up Swilling and the defense, marching 75 yards in 11 plays on the Jackets’ opening possession, with Marshall scampering the final 28 yards to tie the game. Next it was the special teams’ turn, as on the ensuing kickoff, Tariq Carpenter forced a fumble that Ajani Kerr jumped on at the Miami 23. Three plays later, Tech took the lead for good on Marshall’s second TD run of the opening period.

Georgia Tech, with an assist from an amped-up Whiteout crowd, forced Miami into several timing penalties. The Canes committed four false starts, while the defense jumped offsides twice, one of them turning a fourth-and-7 into a fourth-and-2, which Marshall converted to extend the Jackets’ opening touchdown drive.

Tech showed the kind of resilience that has been part of its M.O. during their 5-1 stretch late in the second quarter. Up 17-7, the defense put Miami in a fourth-and-32 situation. Miami punter Jack Spicer, going rugby-style, skipped his punt downfield and the ball hit Nathan Cottrell in the back of the arm. Miami recovered at the Tech 30 and cashed in three plays later to cut the lead to 17-14 going into the half. 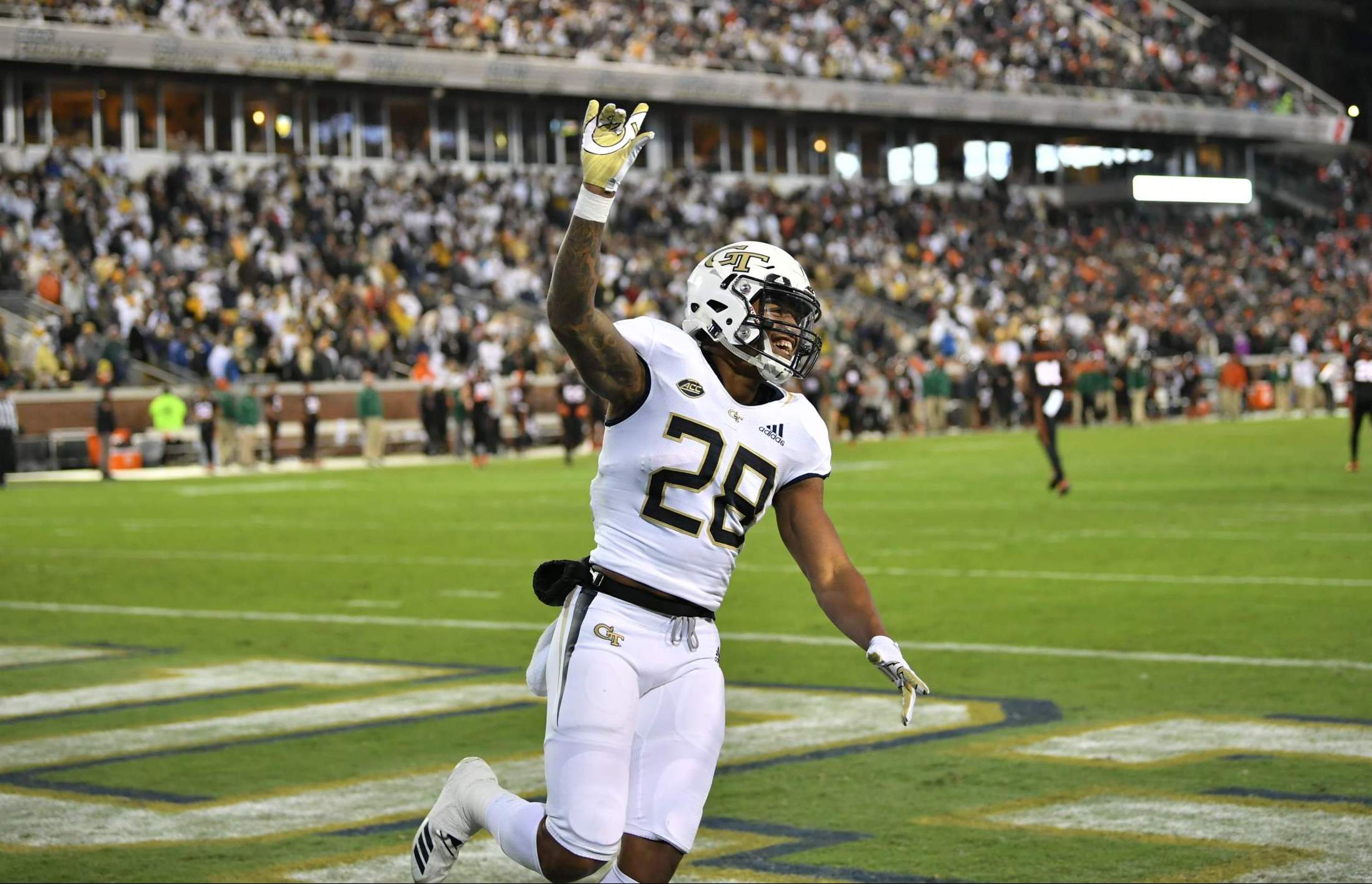 However, there would be no wallowing on the Georgia Tech sideline — not even after the offense went three-and-out to start the second half. Instead Jackets’ special teams stepped up as punter Pressley Harvin III boomed a 54-yard punt, which was muffed by Miami returner Jeff Thomas. Juanyeh Thomas (above) shoved Thomas out of the way with one arm and recovered the ball at the Miami 10.

The Jackets had to settle for a field goal to extend their lead to 20-14, but the break helped shift momentum back their way.

In the fourth, Tech showed it could finish.

After the defense endured a frustrating 95-yard Miami TD drive that cut the Jackets’ lead to 27-21 midway through the final period (the Hurricanes converted four third downs along the way — including three straight third-and-10s), it was once again the offense’s turn to step up.

“I didn’t have to tell them anything [in the huddle]. They knew what was on the line,” said Marshall of his offensive teammates when they got the ball back with 6:43 to go. “I knew that we needed to keep the ball for six minutes. All we needed was a couple first downs, let Miami use their timeouts, and from there we just run the clock down.”

Facing third and six and a three-and-out, Marshall found Camp for the pivotal 22-yard pickup. From there, Marshall and B-back Jerry Howard did the rest. The duo pounded the ball fivetimes over the next six plays, including a back-breaking 11-yard burst by Howard on third-and-four with 2:53 to go that all but sealed the bowl-clinching victory.

It was a nice way to exorcise the demons of last year’s devastating loss at Miami and for Johnson to hand Canes coach Mark Richt his first-ever defeat at Bobby Dodd.

“I hadn’t beaten them yet, so that was awesome,” said Stewart, after a huge exhale. “That nail-biter last year where they won on that fluke play, gosh, it’s hard to describe that feeling. It’s just great to be playing with these guys and these seniors and I’ve really enjoyed every single moment.”

“Tonight was super-special,” said Marshall. “Coming into a 7 o’clock game, knowing that Bobby Dodd is going to be lit up in the middle of Atlanta, last Whiteout game for me, and to go out and be able to seal the deal at the end, to get a win for the younger guys that were on the team last year that haven’t experienced a bowl. Just to be able to experience a bowl and actually be playing in one is very special.”

Conversely, the younger guys were just as pleased to get the win for the seniors to go bowling.

“We didn’t have an opportunity to go to a bowl game last year,” said Swilling. “The last game of the year, seeing our seniors’ faces, seeing how hard that was for them, we wanted to make sure that our seniors had a good last Whiteout and make sure that we’re bowl eligible.”

“Just winning the sixth game and being able to go to a bowl game,” said freshman outside linebacker Charlie Thomas, who had three tackles and a fumble recovery. “Like [defensive coordinator Nate] Woody says, every week, win or lose we just need to get better. It’s just steady climbing, steady climbing. Keep chopping at that tree.”

The Jackets have two more trees to chop down this regular season. Don’t look for too much to change in the Jackets’ approach.

“Coach Johnson has said these past couple of weeks, ‘Do your job. The guy to the left of you and the guy to the right of you are going to do their job. So you need to focus on what you have to do,’” said Stewart. “I think it’s just really loving the game and really loving to win … really, not even loving to win. Like Coach Johnson says, hating to lose. I hate to lose. Winning is awesome and I love it, but I hate to lose.”