RELATED STORY: How Pat DiMarco is using his offseason to invest in his future (Buffalo Bills)

It’s the question that student-athletes face every day, as the seek that next level.

But student-athletes aren’t the only one faced with that dilemma. Those that reach “the highest level” face it too.

That’s why the Georgia Tech Athletic Association and the NFL Players Association (NFLPA) teamed up to find a solution that works for NFL players considering the next step will be after the conclusion of their professional playing careers.

The result is the NFLPA Externship Program, which began in 2014 and has partnered with 41 different organizations, amongst them Capitol Hill, NASA, the Players Tribune, the Gatorade Sports Science Institute and United Way to give opportunities to 183 “externs.”

The GTAA got on board in 2020, offering a three-and-a-half-week externship in which a pair of current NFL players interested in careers in athletic administration got the opportunity to observe the day-to-day workings of the athletic department and interview department heads. Their final project would be to create together a 30-45-minute presentation on the life and challenges facing student-athletes choosing the professional sports lifestyle.

For nearly an hour, DiMarco, preparing for his ninth NFL season, and Fant, prepping for his third, walked the group through the do’s and don’t’s of everything from proper attitude, to time and money management to the hiring of the right agent, then took questions. While their advice was aimed at those who’ve set their sights on the NFL, much of it fit all student-athletes and all students, period.

“We’re going to share (the presentation) with all the student-athletes here,” said Total Person Program coordinator Reid Ferrin, who knew DiMarco when both were members of the Kansas City Chiefs and Atlanta Falcons organizations. “These lessons and tips are going to make sense going into any profession, whether it’s pro sports, sales, whatever it is. What they taught here today are going to help [student-athletes] in the future.”

DiMarco and Fant learned these lessons by going through them, and in addition to learning about the inner-workings of a collegiate athletics department themselves, they hoped to pass along their own knowledge about life at the professional level.

“It’s just getting the information in front of [student-athletes],” said DiMarco, a 2012 South Carolina graduate, who’s played one year in Kansas City (2012), four in Atlanta (2013-16) and begins his fourth in Buffalo. “This is all stuff we wish we would have known going in to being professionally in the NFL. They’re going to use this and pass it along for years to come and hopefully they bounce more ideas off us moving forward.” 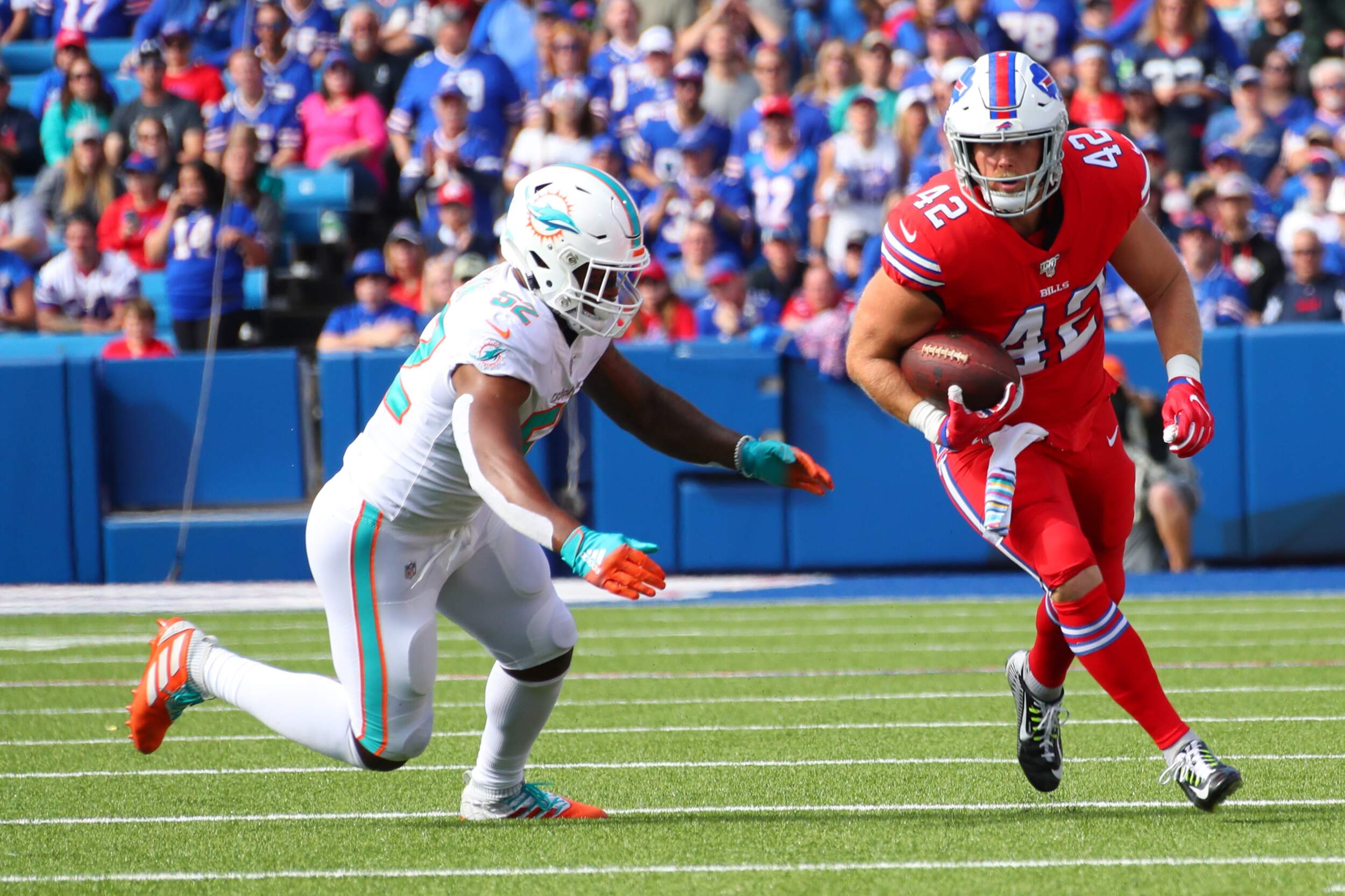 “You always want to give back to the next generation, to give back to other student-athletes,” said Fant, an Atlanta native — he attended Our Lady of Mercy High School in Fayetteville — and Indiana University graduate, who’s played corner for two years with the Chicago Bears. “So being able to do this, really express my knowledge and give information I felt was useful that people passed on to me and pass it down to people younger than me, was an amazing feeling.”

“I just wanted to come here and get extra education on what I’ll be getting into,” said Owens. “It was a pleasure listening to these guys, listening to the stories about the injuries that they had because I’ve been injured also, learning how to deal with that process, how to be a professional every day. I got great knowledge, great insight on the place where I want to be. They’ve been where I want to go, so it was important for me to listen to them.”

For DiMarco and Fant, getting to be GTAA externs meant being selected from a list of 10 applicants, then standing out among the five candidates interviewed by deputy athletics director Mark Rountree and director of executive operations Maureen Tremblay.

“Mark Rountree and I screened all of the candidates to determine their fit for the job, interest in college athletics and why they wanted to gain experience at Georgia Tech,” Tremblay said. “They met with each unit to understand the daily responsibilities and roles of our administrators. They met with all of our executive staff members and Todd, as well as worked directly with Georgia Tech Sports Properties, sports nutrition, sports communication, compliance, academics, Total Person Program to understand the role those departments play in the operations of an entire athletic department. They worked closely with Reid Ferrin, Total Person Program career coordinator, to understand the student-athlete experience, as well as connecting with the football team after a practice.”

The externs, both of whom live with their families in the metro-Atlanta area, also interviewed and were accepted for externships at the University of Georgia before choosing Georgia Tech. They were gracious for the opportunity afforded them by GTAA personnel and by the student-athletes’ and staff’s attendance at their presentation.

“You see the staff is invested. In our three-and-a-half weeks here, we got a lot from them,” said Fant. “Just how genuine they are, how they were all willing to talk to us and how easy it was just to talk to them. It felt like family right away. You don’t get that every place. Seeing the knowledge they have around here — it’s no surprise, it’s Georgia Tech — the student body, the student-athletes, are all intelligent. The staff is just as intelligent and is willing to do whatever it takes to help their student-athletes succeed in life, on and off the field. They helped us grow, helped mold us and [helped us] see everything that goes into running an athletic organization. That was really cool.” 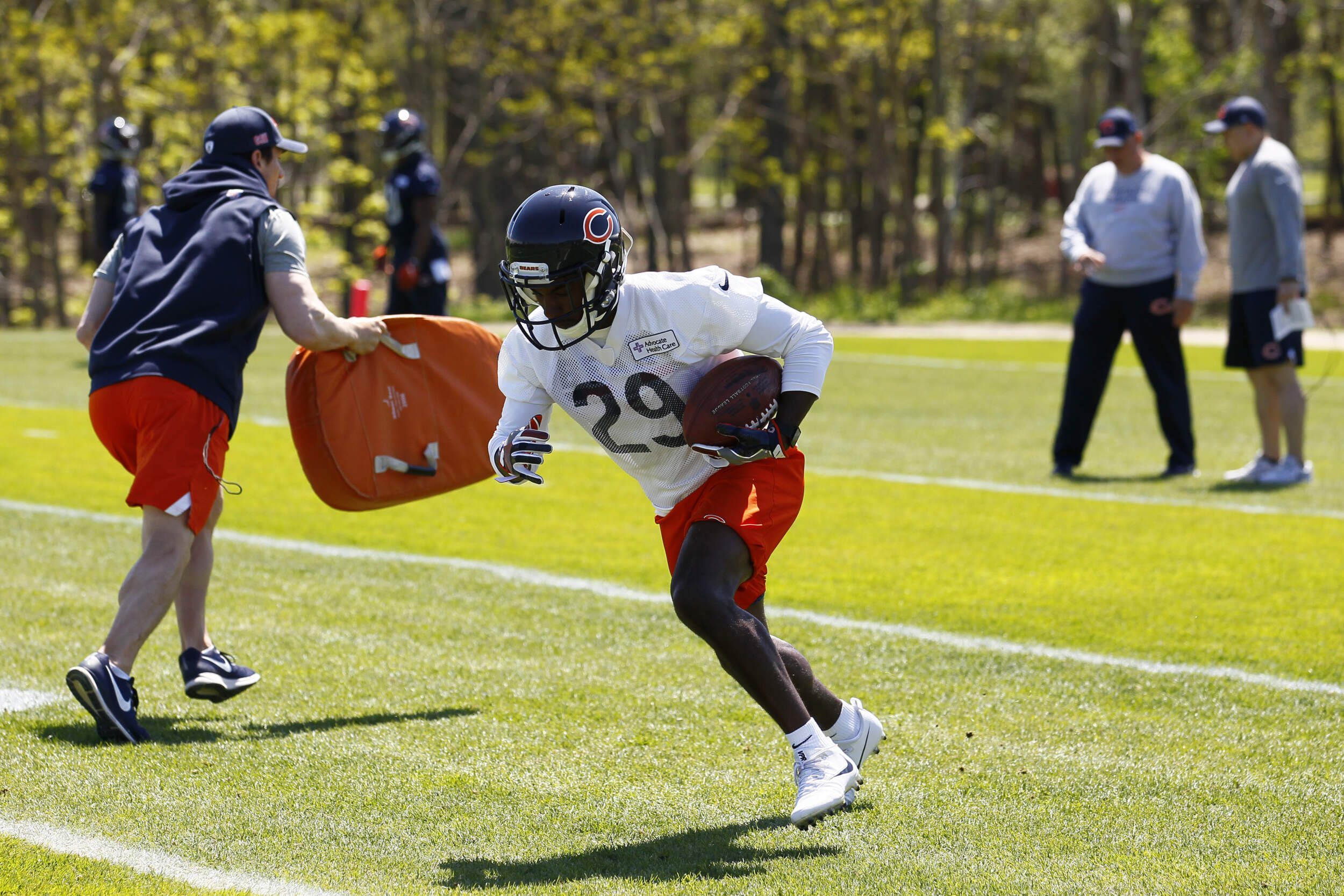 “It was really cool. We kind came in not knowing what to expect,” said DiMarco. “Maureen was like, ‘I really want the key to this program to be you guys, whatever you want to get out of it. We’re doing this to help you guys out.’ We’ve sat in on executive board meetings, we’ve sat in on player and academic advisor relations. We’ve sat through a lot of stuff and we’ve talked with a lot of associate ADs in different departments. I feel like we’ve poured into them as much as they’ve poured into us. They’ve had a lot of questions about what it’s like in the NFL and how they can take stuff that we know and pour it into the young [people] to help transform their lives.”

A possible end game for DiMarco and Fant is to one day pursue a career in athletic administration. Seeing firsthand how Georgia Tech operates proved eye-opening.

“I think we were super-overwhelmed with how many people it takes to run this thing — the athletic program, the academic program, everything that goes into it,” said DiMarco. “When you’re going through, when you’re a student-athlete, you take a lot of that stuff for granted. You don’t know all the moving parts that it takes to make the big business run. They have 17 sports and over 400 student-athletes. It’s a lot.”

As eye-opening was experiencing the campus.

“The Georgia Tech history, the Georgia Tech education, the network at Georgia Tech was what really intrigued me here,” DiMarco said. “It’s in the heart of midtown Atlanta. There are so many companies and so many opportunities close by. Just having your name, whether it be an internship or whatever it is, tagged along with Georgia Tech is going to carry some weight.”

“Being able to see more of the campus and see it not just from a football view but from an employee type of view, a student-athlete support staff kind of view, that was amazing for me,” said Fant. “Tech Square, I had never been there so I was like, ‘Wow, this is right here?’ I would have never known how beautiful it is. I see all the great things they have here and the things they do. It is just amazing. So for me, it was really cool being from the Atlanta area. Seeing what Georgia Tech has to offer, it’s very impressive.”

DiMarco and Fant talked a lot about how short playing careers potentially can be. DiMarco, an undrafted free agent wasn’t invited to the NFL Combine, then got injured early in his first training camp. Fant, who was invited to the Combine, got injured at it, nearly seeing his dreams go up in smoke. They stressed preparation and education as a fail-safe. Fant talked about taking advantage of doing internships.

That’s something Owens has already done.

“I learned the importance of internships coming in my freshman year,” said Owens, who will intern this summer at Cox Media, Inc. and RaceTrac Industries after interning last summer at Press Sports, Inc. “Football is the reason why I’m here but it’s not who I am. I still want to get my education. I still want to try to find a way outside of football.”

Next for the externship program is evaluation, then improving on it. The externs had positive feedback for all.

“My impression was that it was amazing. If I had to say anything, it would be make it a little bit longer,” said Fant. “I know it’s during the offseason and you don’t want to take away from guys, but even an extra week, I wouldn’t mind staying. As far as Georgia Tech, they did a great job keeping our days busy, letting us get in and talk to everybody.”

“This was their first run at it. I think they did a really good job of letting us kind of cater it to what we want to get from it,” said DiMarco. “They asked us, ‘Of the seven or eight different operations staffs that [we] have here, which ones do you really want to meet with? We don’t want you just to come here to meet with everybody if you don’t foresee something along that in your future.’ That was an incredible thing.”

Ferrin found the presentation and the debut of the program successful.

“It was everything and then some that we could have asked for,” he said. “It’s everything that our athletics director, Todd Stansbury, wants. He wants our student-athletes market-ready. That’s what Rashard Fant and Patrick DiMarco are all about. They’re helping prepare our student-athletes to be even more advanced and ready for what’s next, whether it’s for the NFL, NBA, MLB, WNBA or a career outside of sports, you name it.

“I’m going to utilize these guys, I’m going to ask them questions, how we can even make [the externship] better and more impactful for the externs down the road,” Ferrin said. “I think this was a hit in year one, but [we] just [want to] learn more. Knowledge is power. The more we know, the better the program we can provide.”