The Good Word | by Matt Winkeljohn

When Thomas addressed 23 first-year NFL players on June 17 at team headquarters in Flowery Branch as part of the Falcons University Rookie Success Program, she suggested planning ahead of time what to eat.

The timing was perfect. The new guys were about to break from team control for about six weeks before training camp begins. They’ll have no direct supervision for the first time since . . .

“Now that they’re not going to be cared for or given per diem, I gave them some high-level things to think about for what a day should look like, how often to eat,” Thomas said. “I gave them a grocery list with 10 or so meals that they could handle themselves.

“They need to come back [to training camp] ready to go, and I also did an interactive thing that we do with all of our teams at Georgia Tech. We had a guacamole-making contest. I brought all the supplies, and we had fun.” 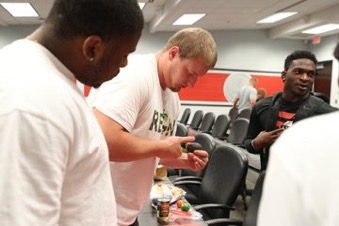 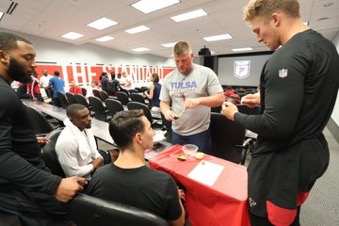 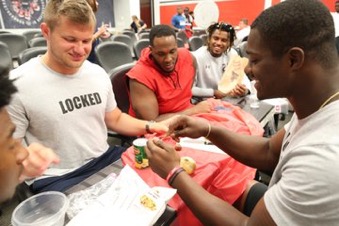 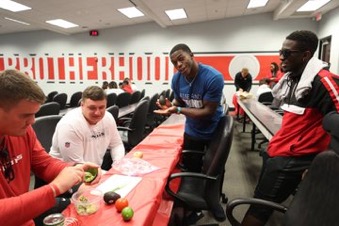 There is a bit of a personal story behind guacamole, and we’ll get to that, but first and foremost Thomas advised the Falcons’ new players about structuring their diets.

Her background is different from theirs. She was a distance runner at Chattanooga, and she qualified for the 2004 Olympic trials in the marathon. NFL dudes are a lot bigger. She spoke from experience when suggesting snacks and meals.

“I have used it with our own football players at Georgia Tech. We know their protein needs are higher. Strength and power athletes have higher protein needs,” she said. “Snacks should involve carbs and proteins together. I have a list that we provide; Peanut butter and jelly, hummus and pretzels, high energy protein bars . . . high proteins.”

This wasn’t the first time Thomas addressed professional athletes, and/or their coaches.

A couple years ago, she spoke at Flowery Branch when the Falcons held a symposium for high school football coaches.

She also addressed young Atlanta Braves around Christmas time three years ago. Some of the young lads had come straight from high school, and others had spent three years in college with more structure.

“I went to Turner Field and they were having this week-long training with top prospects, and one of the things they wanted to do was bring in someone to talk nutrition,” Thomas said. “There were a handful of guys that clearly just didn’t care, and there were several guys that had individual conversations with me afterward.”

When Falcons vice president of player affairs Kevin Winston built the syllabus for Falcons University, he figured that a second chapter on nutrition could be well filled by Thomas, who has become one of the most respected members of her profession, as noted by her many honors within the Collegiate & Professional Sports Dieticians Association.

So, he called her again.

The first chapter was authored several weeks earlier in Falcons University earlier by Marie Spano, a contractor who serves as sports nutritionist for the Falcons, Hawks and Braves.

Winston brought Thomas in for reinforcement.

She’s been advising Tech student-athletes since 2003, and has become an assistant athletics director for student-athlete development. In 2008, she was placed in charge of Tech’s Total Person program, which is analogous to Falcons University.

“Those players go through a handful of weeks of life skills, like Total Person,” she said. “Many of them have heard this before, but it’s always good to hear it again from someone else, another voice.”

The main message Thomas delivered was for players to get involved in their own nutrition. Don’t just go out to eat all the time. Be mindful of what you’re putting into your body.

With that in mind, she prompted engagement with a contest. The 23 players were divided into four teams and tasked with making guacamole from avocados and other ingredients. She provided each team with a brown bag of the same ingredients: avocados, sweet onion, a tomato, lime, salt, a can of sweet corn, a cutting board, knives and tortilla chips.

There were no rules, really.

“You can make it as fancy or un-fancy as you want. No recipe,” she said. “They all had the same ingredients. In my opinion, guacamole is hard to mess up.”

Leah said she makes guac at home “probably five nights a week” so that everyone in the house can snack. “I make it almost every night while I’m making dinner. One avocado, part of an onion, and salt, sweet corn if I have it,” she said.

Thomas’ children, ages 10, 8 and 6, decorated the brown bags with Falcons logos, and they will return to Flowery Branch for a training camp practice.

The aspiring Falcons, many of whom will not make the team in late August, went at it to make guacamole.

For Thomas, the corn was key.

“There was a clear winner,” she said. “The team that won used [avocado], tomato, lime, salt and sweet corn.”