There was no need for Jose Alvarado to defend his being selected ACC Player of the Week for last week.

His defense spoke for him.

In two games, Alvarado, who joined Moses Wright and Michael Devoe as Yellow Jackets’ winners of the award this season, put the clamps on Louisville’s Jordan Nwora, limiting the ACC’s leading scorer to 10 points on a nightmarish 3-for-11 shooting. He also grabbed 10 rebounds as part of his first career double-double. Three days later, he set a Georgia Tech record with nine steals. The nine steals tied for the fourth most in a game in ACC history.

“Jose was just a warrior on Saturday (against NC State). Even on Wednesday (at Louisville), he had 10 defensive rebounds and was really good defensively,” said Georgia Tech coach Josh Pastner. “He’s tough as nails, he competes. He makes some plays that you’re like, ‘What are you doing?’ but he’s just so darn competitive, and he just has such great competitive excellence about himself. He’s a winner, and I’m glad he’s with us.”

The Jackets, as a team are glad to have him back.

They are 6-6 since Alvarado returned from an ankle injury and have won back-to-back games for the first time since early December, bouncing back from a three-game losing streak. With 10 games to go, they’re hoping to build momentum and finish strong.

It will start on the defensive end, where Alvarado is always ready to take on any challenger. He’s not the biggest dog size-wise, but the size of the fight in this dog is unmatched.

“I’m a 5-11 — 6-0 on a good day — guard. I have to be prideful on defense. That’s just who I am,” he said. “You can put anybody in front of me. I’m going to try to play the best defense I can because, in my head, I think I’m the best defensive player. You put me in front of LeBron James. Obviously, it’s LeBron James, but I’m going to give it all I’ve got. Some nights it goes my way, some nights it doesn’t, but that’s just basketball. I just go out there and play defense.”

He played at an unprecedented level against the Wolfpack, when his smart positioning, keen sense of anticipation and lightning-quick hands resulted in his record-setting nine steals — the last two coming on NC State’s last two offensive possessions to preserve the Tech victory. Alvarado was credited with eight steals during Sunday’s game, but a standard review of the video afterward uncovered a ninth.

“I didn’t know what was going on until I saw it on Twitter, it said they confirmed it,” said Alvarado, whose previous high-steals game was six, set three weeks earlier in the win at North Carolina. “I called Coach (Pastner) right away, he said, ‘Yeah, congratulations!’ I called my parents. They were happy for me. My name is in the books. It’s just a blessing.”

It was a light on a Sunday of mixed emotions for Alvarado and the entire basketball world, which would be shaken by the sudden passing of Kobe Bryant.

“It was pretty sad,” he said. “I never met him, but as a basketball player, seeing him as I’m growing up, seeing the mindset he had for the game and the heart that he gave on the court, I feel like I got some of that. He was just at a different level. Prayers out to his family. I’m soon to be a father. It was just a sad, sad, sad day. I was so disappointed with the news. I’d prefer to refocus on the nine steals.”

Jose has a special tie to the Yellow Jacket legend he unseated, fellow Brooklynite Kenny Anderson, who held the record for 28 years, which he set on Jan. 30, 1991 against Duke.

“It’s coincidence that he’s from Brooklyn, a New York guard, stuff like that. I was excited just being tied with him,” he said. “When they said I passed him I said, ‘Wow, that’s crazy!’ It was just a shocker to me, too.”

The timing of the last two steals, which sealed a season sweep of the Wolfpack, was paramount to Alvarado. Number eight came with eight seconds remaining and the Jackets holding a 60-58 lead, when he stepped between guards C.J. Bryce and Markell Johnson, intercepted the intended handoff. He hit a pair of free throws to extend the lead. On the following possession, he stripped Johnson and go coast-to-coast for the game’s final points of the 64-58 win.

As he stood at the baseline roaring back at the crowd and standing in triumph, only one thing mattered to him.

“I just wanted to win the game so bad. It happened in such an amazing way. I couldn’t ask for any way else,” he said.

Of course, he can’t ask opponents about how they deal with him — opponents like the Wolfpack’s Johnson, who ranks sixth in the ACC in assist-to-turnover ratio yet was victimized four times by Alvarado.

That defense is leading directly to offense.

On Saturday, his nine steals accounted for 12 of the Jackets’ 20 points off turnovers and matched the ‘Pack’s total off T.O.s.

All this defense and improvement in transition points has made the expected profound difference on the offensive end. Since his return, the Jackets are 6-6 in points off turnovers and 8-4 in fastbreak points. His 13.3 points per game and 4.4 assists have helped the Jackets perk up offensively. An offense that hit something of a sinkhole in consecutive games going from scoring 73 points in the win over Nebraska, to 63, 53 then 47 in losses to Syracuse, at Kentucky then Ball State, has averaged 69.5 over the last 12, including having two of its three highest-scoring games of the season.

With 10 games remaining, the Jackets will try to get back to .500 Saturday against Notre Dame, then work for a strong February push.

The fiery Alvarado will lead the way emotionally.

He admits he will never cool his ferocity, but is trying to be a little cooler in avoiding silly fouls. The approach seems to be working, as he’s been whistled for a total of six fouls in Tech’s last three games, (totaling 96 minutes — including 39 at Louisville and 37 against NC State) after picking up at least four in three of the previous five games. He knows the current trend must continue for the Jackets to be successful the rest of the way.

“I’ve got to be smarter about it. As a guard, to help my teammates, I can’t have three (fouls) in the first, like five minutes,” he said. “That doesn’t help any of my teammates. I just have to be smarter with it. I’ll still take the chances I take on getting steals, but just be more smart on the fouls.”

Smarter and effective ideally will translate to more double-doubles and now challenging his single-game steals record as well as moving up in the program all-time steals mark. His one swipe in 19 minutes against Morehouse give him 130 for his career, tying him for 13th with Maurice Miller. His 2.67 steals per game in ACC games still lead the conference.

Not that he’s counting.

“I’ll tell you right now, I don’t go into these games thinking, ‘I’m going to do this,’ or ‘I’m going to set a record, or get a double-double.’ I just go in there and play my heart out,” he said. “It’s a coincidence that it’s going in the right direction for me. But, hey, all those double-doubles or nine steals, I’d take them back if we could get all wins. I just want to win the game. That’s who I am. I just want to win. Sometimes it goes my way and sometimes it doesn’t. I’m just glad that those little things are going my way. It’s a blessing getting double-doubles and setting the record for Georgia Tech.”

He’s also pleased to have hit the top 10 in the ACC in assists-to-turnovers. That’s an area where he’s keeping track and actively looking to move up.

“Our main focus is to take care of the ball, because if we do that as a team, I think we can be one of the best teams in the ACC,” he said. “We’ve showed that we can hang around with anybody. That’s who we are. We have to lower our turnovers and finish strong.

“Coach always says ‘Take it day by day.’ So that’s all we’re doing,” he added. “Some games didn’t go our way but we were getting better in those games. I know it’s hard to see at that point but we are. We do get better and we keep on taking it day by day.” 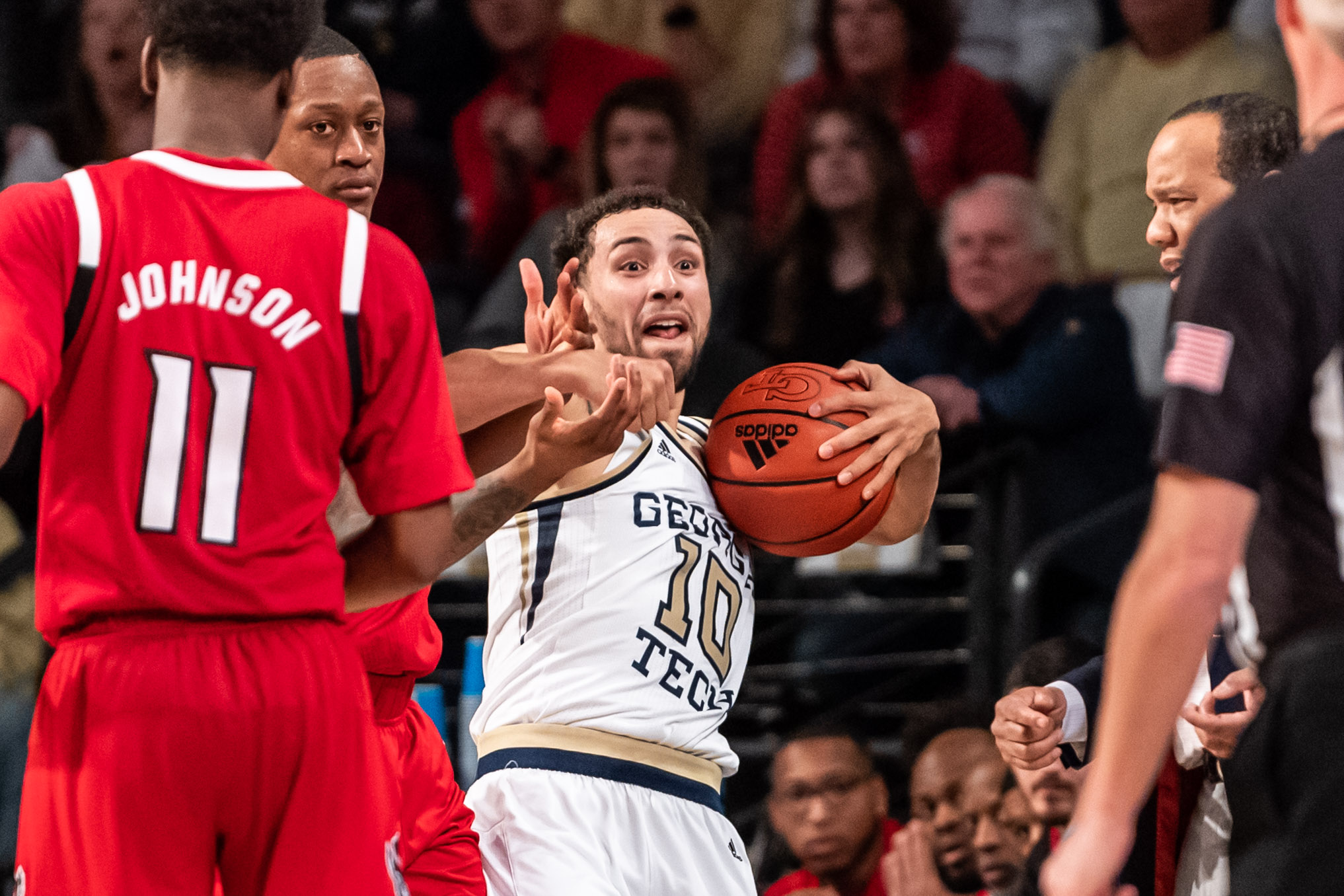