Homecoming Weekend is one of the most special of every college football season.

Key, Choice, Coleman, and Burton were all brought home, hired by first-year head coach Geoff Collins. A Conyers native, who frequently talks about the Saturdays of his youth spent at Bobby Dodd Stadium, Collins made a conscious effort to bring back those responsible for glory days of Georgia Tech football.

“We wanted to make sure we re-energized, re-engaged our former student-athletes, the legends that played here. We wanted to bring them back into the family,” said Collins, who also added former Tech standout Will Glover and retained former Jackets Kevin Cone, Rod Rook-Chungong, Errin Joe and Tevin Washington on his support staff. “Being a lifelong Georgia Tech fan, I knew how important that was. I tried to hire somebody from every generation of Georgia Tech football. All of those moves were intentional, so everybody would have somebody that they could connect with.”

Collins, who attended Western Carolina, also has Tech ties, as he returned to Atlanta twice before as a member of the Yellow Jackets’ staff. He worked as a graduate assistant and tight ends coach for three seasons under George O’Leary (1999-2001), then was Chan Gailey’s recruiting coordinator for a year (2006). Over the years, his career frequently became intertwined with former Yellow Jackets. 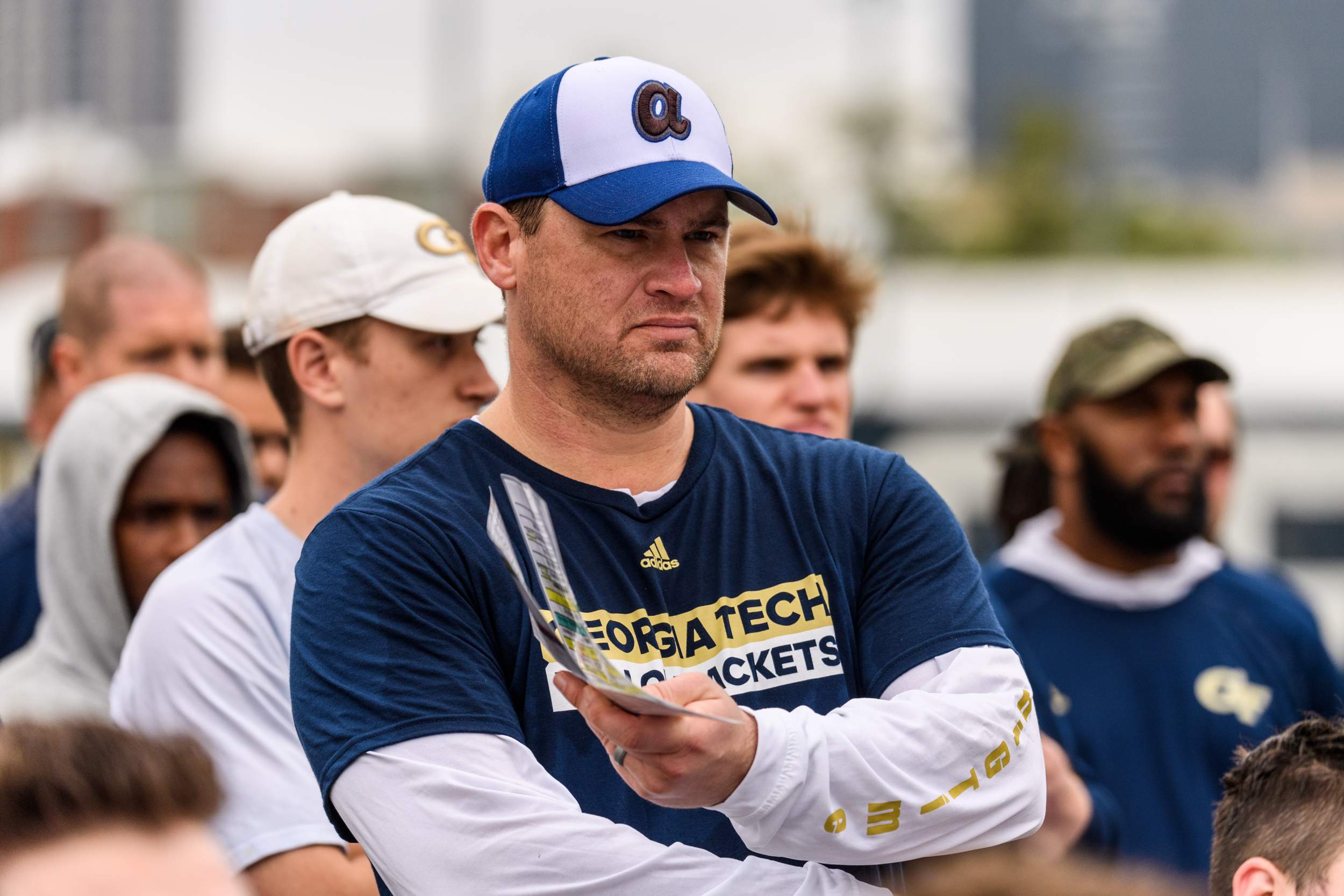 Brent Key (class of 2001) is one of them. The Clay, Ala., native, started at guard from 1997-2001, serving as captain his senior year, when he was named All-ACC. They met when Collins joined the Tech staff at the start of Key’s junior year. Key would get his biggest coaching break from Collins as a birthday present in 2004, after a foray into “the real world.”

“It took me about six weeks of waking up every morning and tying that tie to realize I was a football coach,” recalled Key, who actually followed Collins as a G.A. at Tech in 2001. “What I didn’t realize was how hard it is to get back in once you get out.”

Collins, then head coach at Western Carolina, eased the path, hiring him as running backs/tight ends coach. They worked together again at Central Florida under O’Leary in 2008 and ‘09.

They stayed in touch, and Collins was able to lure Key away from Alabama, where he was offensive line coach — something that should serve him well as far as animosity toward Clemson, as the Crimson Tide and Tigers have met four straight years in the College Football Playoff, splitting the meetings.

What was the deciding factor in coming back to Georgia Tech?

“It’s home,” he said. “I can guarantee you this. When we’re done changing the culture under the vision of what Coach Collins wants to do, no one will ever ask that question again.

“I get more energy walking out on (Grant Field) than I do walking out in front of 110,000 people anywhere else,” he added. “I see the lights of the city. I feel the energy.” 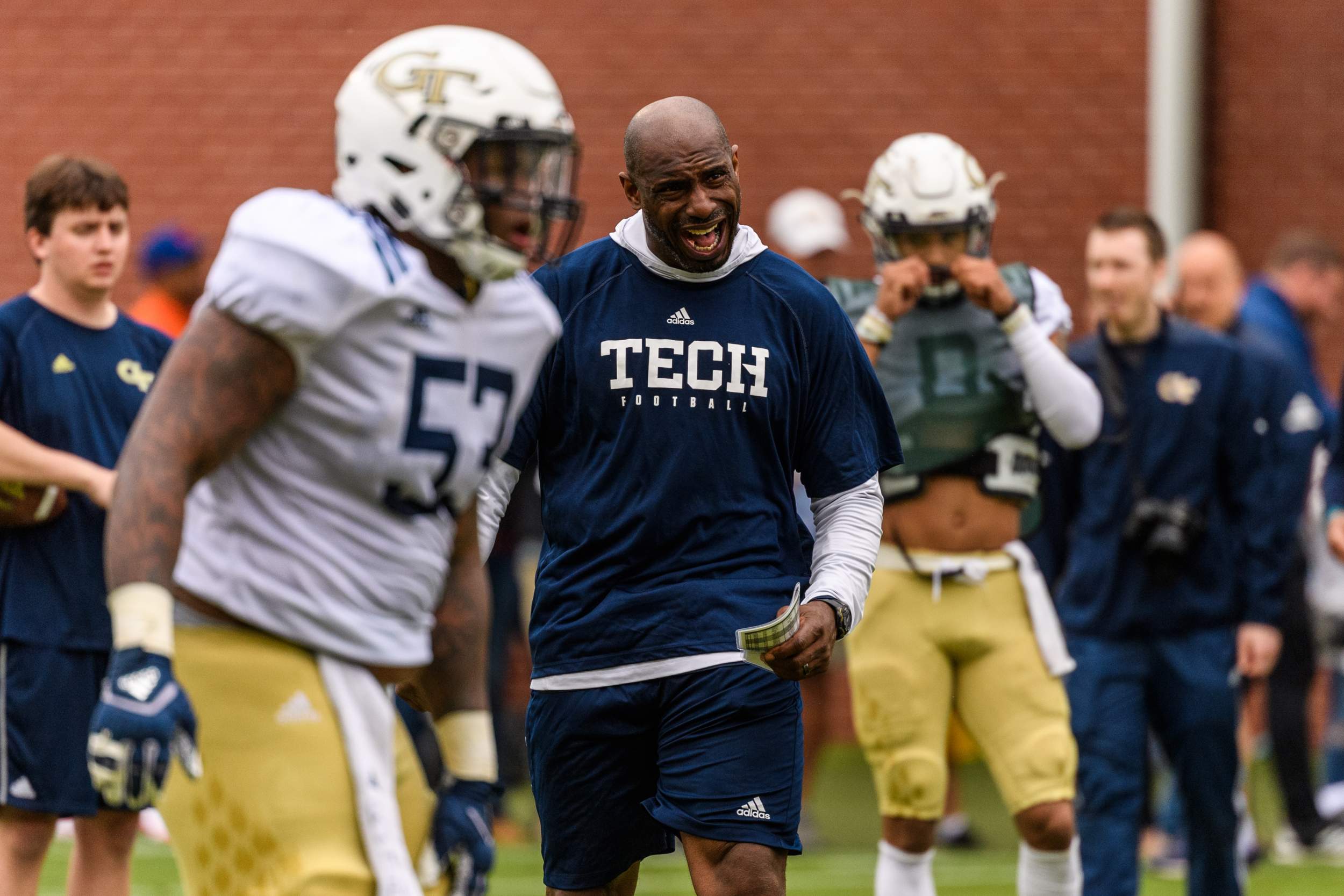 Marco Coleman felt a similar yearning to come home to Georgia Tech, where he earned induction into the GT Athletics Hall of Fame (class of 2001). From 1989-91, Coleman spearheaded the Jackets’ defense and helped them win the 1990 National Championship, while earning a pair of first-team All-America honors individually. He was selected 12th overall in the 1992 NFL Draft by Miami and played 14 years in the league before leaving football in 2005 to spend time with his children. In 2017, he got the itch to come back to the game. Over the past two years, he gained coaching experience with the NFL’s Philadelphia Eagles and Oakland Raiders, as well as defensive coordinator at Madarin High School in Florida.

So what magic words did Collins use to convince him to come back to school?

“All he had to say was, ‘There’s an opportunity to be here. Come coach at Georgia Tech,’” said Coleman, adding, with a laugh, “It was probably the easiest sale he’s ever had to make”

Coleman not only brings a championship pedigree and knowledge of how to get to the quarterback — he’s fourth all-time in Tech history in career sacks (27.5) and tackles for loss (50.0) — but, maybe most important, humility about himself and great pride in the Institute.

“I’m not one that really toots his own horn,” he said. “I go into recruits’ homes as Marco Coleman, the Georgia Tech defensive end/outside linebackers coach. I go in with the confidence of knowing that I’m representing a great institution, representing a great coach and representing an expanse that is going to be very hard to find anyplace else.”

Coleman sees the same in the staff.

“They bring a good understanding of what the program has been, the different experiences that each one of us has had and also a passion to want to see it be successful,” he said. “The experience that we’ve had brings a level of passion and seeing that the program continues to grow and the experience for the young men that come in is as good as the one that we had. You know that you’re working for guys that care.” 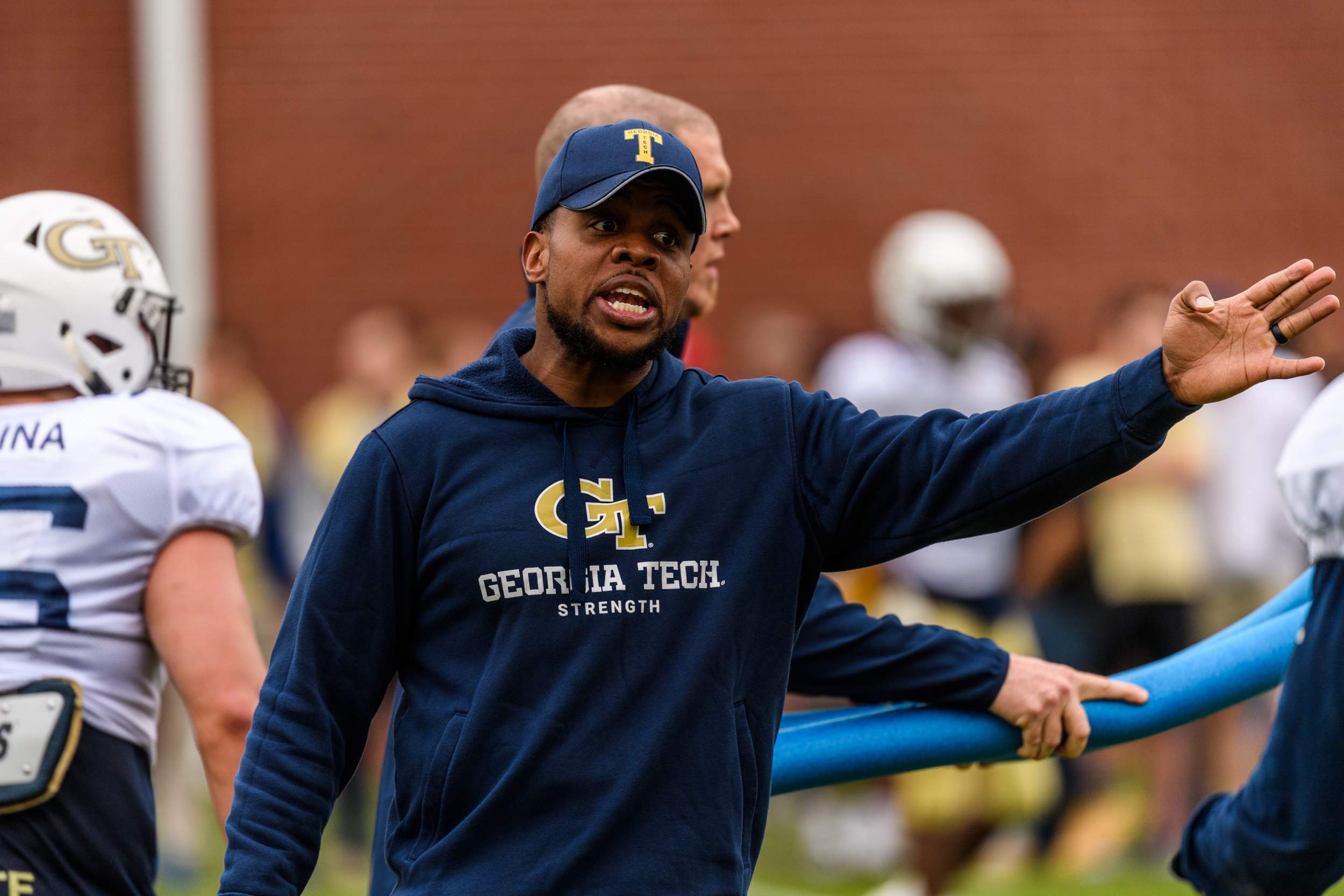 Caring has always been synonymous with Tashard Choice.

Choice, who’ll be part of the Georgia Tech Sports Hall of Fame’s class of 2019, played with passion at Tech from 2005-07, after transferring from Oklahoma. He rolled up 3,365 rushing yards (fourth in school history), scored 28 touchdowns (sixth), had a record nine-straight 100-yard rushing games, and won two ACC rushing championships. He also exhibited that in five years in the NFL (2008-13).

“First and foremost, the players have to know that I love them — more than what they can do on the football field,” said Choice, whose previous pupils included then-Cowboys’ rookie Ezekiel Elliott in 2016, and star backs Deandre Torrey and Loren Easley at North Texas, where the Mean Green recorded back-to-back nine-win seasons in 2017-18. “It’s about relationships. There’s no good coach without good players. The players make the coach, so I hold them accountable. I demand a lot out of my players, to push themselves to the brink because, ultimately, they’ll see success. That same attitude is what I have to do here at Georgia Tech.”

Choice likes the attitude that he’s seen out of every assistant on the staff.

“Coach Collins is big with energy, so every coach that he brought on the staff coaches with juice,” he said. “That’s the method to his madness. Every coach that he hand-picked was a guy that he knew had juice on his own. He lets you know how he wants it and the different things that he wants to get done. So when coaches do it, it’s not fake. It’s them being themselves.

“That whole mystique and that whole Georgia Tech tradition, that’s what we all have in common and we want to bring back,” he added, “That rough and tough football player that’s smart academically but also on the football field.” 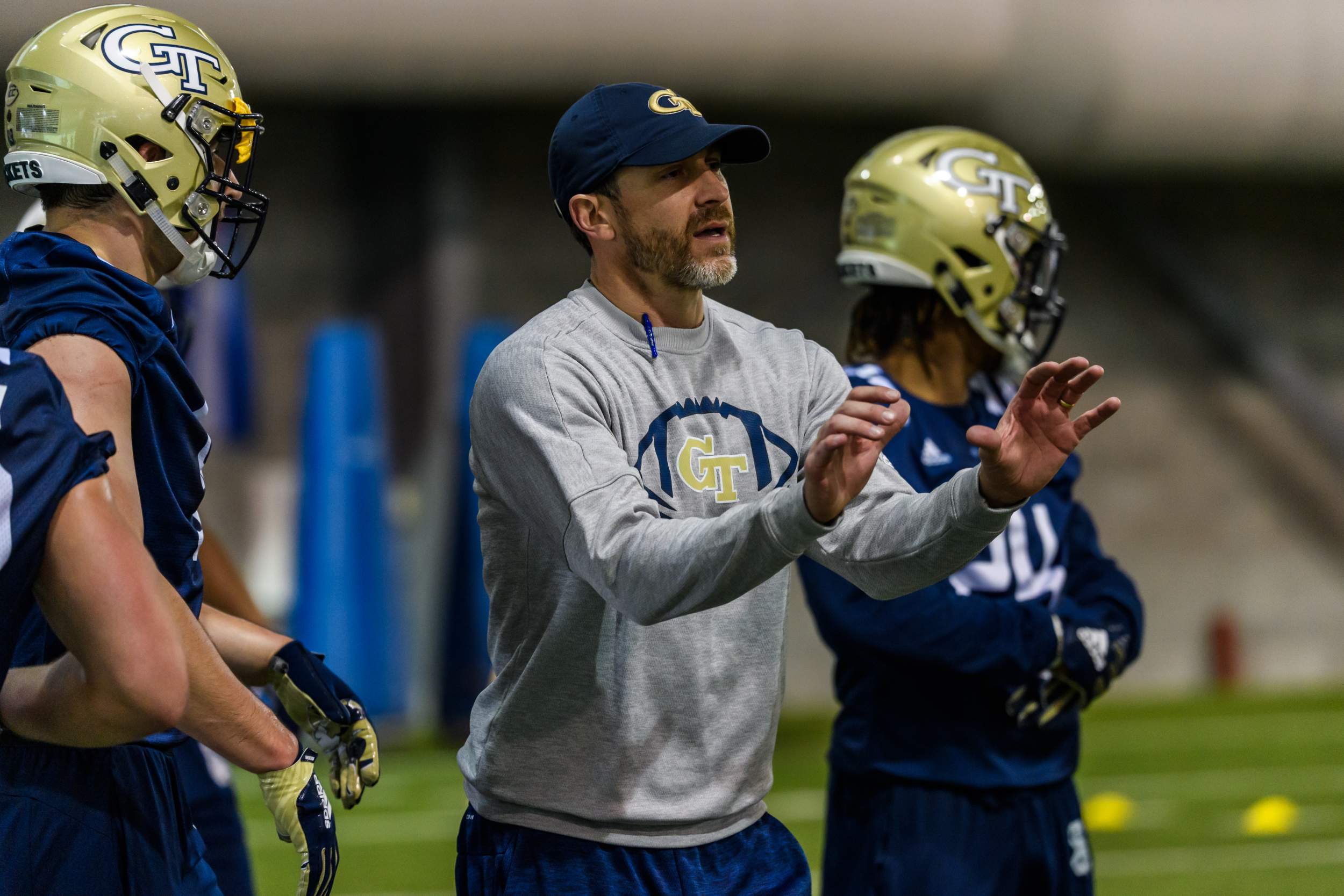 Nathan Burton knows the type and has seen several variations of it. Burton played at Tech from 2001-04, then stayed on as a grad assistant from 2005-08. That allowed him to span coaches O’Leary, Gailey, and Paul Johnson.

“You pick up little things from everyone,” said Burton, a walk-on and four-year letterwinner, who was hired by Collins in 2018 to coach defensive backs at Temple. “The consistency Coach O’Leary had day in and day out, how toughness mattered, being detail-oriented, you can tell Coach Collins picked that up from him. Coach Gailey was a great coach, a wonderful mentor and allowed his coaches to be themselves. Coach Collins lets us do that. Coach Johnson was an in-game adjuster better than anybody I’ve seen. As a coach you appreciate that because on gameday, what you see in film preparation isn’t always what you get.

“It’s been great to see what’s happened over the course of the years,” he added. “Everybody’s been successful. The bowl streak that we had (18-straight bowl appearances from 1997-2014) was through those different coaches.”

While several generations of Jackets football are covered, the staff spends little time in the past.

Collins does encourage his staff to tap into their past and channel their Georgia Tech pride and display it however it might manifest itself.

“The personalities may be different, but at the core of who they are, they’re good people, they’re caring people, their competitors, they have great energy,” Collins said. “That’s the hallmark of Georgia Tech football that we want to start building in our culture. The guys that are on the staff embody that.”

With just a few months on the job and one spring practice in the books, the group has already left its imprint on the program.