As advertised, there was a blackout Friday night during Georgia Tech’s game with Louisville at Cardinal Stadium.

It just wasn’t quite the one that the Cardinals faithful expected.

Instead of an electric atmosphere from a fired-up crowd all donning black that boosted the home team, Georgia Tech’s defense short-circuited the offense, stepped up early in both halves and took the Louisville faithful out of a game that saw the Yellow Jackets rolled, 66-31, in a contest that wasn’t even as close as the lopsided score might indicate.

The Jackets’ defense played their part in the rout by forcing three turnovers (two fumbles and an interception), which led directly to 21 of their 66 points. They have now recorded 13 turnovers on the season, three more than in all of 2017.

“We got some turnovers,” said head coach Paul Johnson, whose Jackets snapped a seven-game losing streak in games played away from home. “If you can get [three] turnovers that’s better than [fourcing three] punts. One of them Juanyeh [Thomas] took all the way back. [The others] gave the offense some short fields.”

While the three takeaways get the headlines, it wasn’t a turnover, but a fourth-down stop, that jump-started the rout. Georgia Tech’s defense held Louisville on downs on the game’s first series, which was just as good as a turnover, as it gave the Yellow Jackets field position at midfield to start the game.

After a 22-yard pass on the first play of the game, the Jackets’ defense rose up. Senior defensive end Anree Saint-Amour stuffed running back Trey Smith on the next play for a one-yard gain. Two plays later, on third-and-one, Saint-Amour shed his block and again stuffed Smith, this time for no gain.

On fourth-and-one at midfield, the Cardinals rolled the dice. Yet, instead of sneaking the 6-5, 211-pound Pass, they chose to pass. The gambit blew up in their face, as the Yellow Jackets blew up the play. Senior defensive end Desmond Branch bull-rushed his way in and got up in Pass’ face. The throw sailed way over the head of Crum and the Jackets took over just 50 yards from paydirt.

Five plays later, quarterback TaQuon Marshall was in the end zone and Georgia Tech was up 7-0.

On the ensuing series, the defense created its first turnover on a fumble forced by Saint-Amour and recovered by true freshman Charlie Thomas. The takeaway, a result of Saint-Amour running all the way from inside the hashmarks to strip the ball U of L’s Trey Smith near the sideline, gave Tech possession at the Louisville 36.

Five plays later, Marshall made it 14-0. 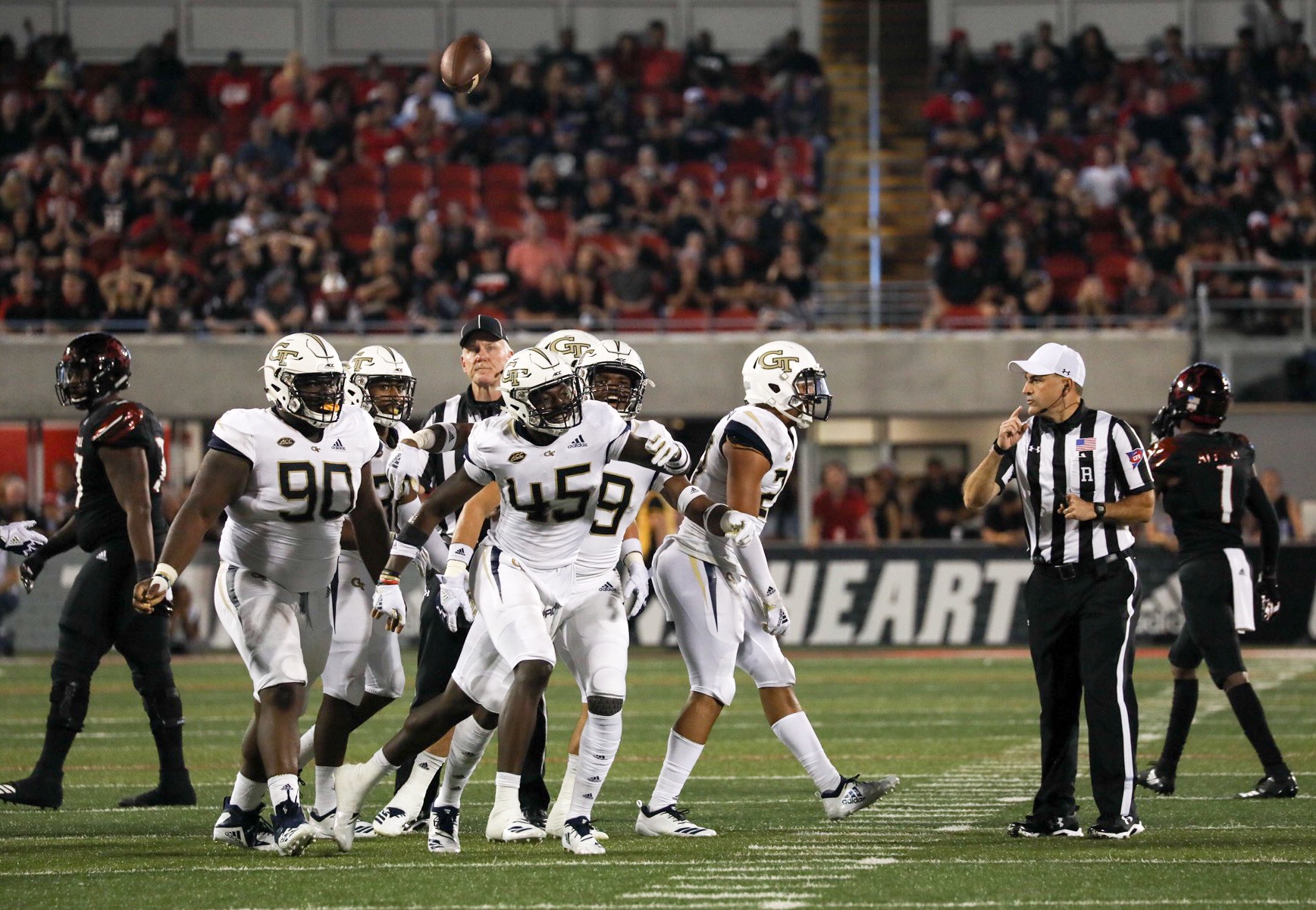 Charlie Thomas (45) and the Yellow Jackets’ defense celebrate one of his two fumble recoveries at Louisville.

In all, the Jackets’ commanding three-touchdown, first-quarter lead could be traced back to a fourth-down stop, a turnover and a three-and-out.

“Those were dominant series,” said Saint-Amour, who had a team-high-tying six tackles and matched a school record with two forced fumbles. “We want to win the game and we want to make stops on defense but we want to make it with emphasis and with pride and with attitude. So I feel like that kind of set the tone for the game, going out there and just dominated … That’s what we were trying to do.”

“I was just chasing the ball,” said Thomas, who, in his first-career start, also set a single-game school record by recovering both of the fumbles that Saint-Amour forced. “You’ve got to get to the ball.”

Getting to the ball and getting it on the ground was very much by design.

The first quarter went as well as the Jackets could have hoped. They limited Louisville to one first down — on the very first play — and 46 yards (22 yards of which on that first snap).

Louisville’s offense began to heat up in the second quarter, scoring 17 points to cut the Jackets’ halftime advantage to 14 points at 31-17. But Tech’s defense responded when it came out of the locker room for the third quarter.

After the Jackets took the second-half kickoff and extended the lead to 38-17, the defense once again forced and recovered a fumble. It was the same M.O. as the first — Saint-Amour with the strip and Thomas with the recovery, this time giving Georgia Tech possession at the Cardinals’ 34.

You’ll never guess what happened on the Jackets’ ensuing drive. OK – maybe you will … five plays later, redshirt freshman quarterback Tobias Oliver plowed his way into the end zone from a yard out. 45-17, Tech.

Another defensive stop ensued — this one sparked by a sack by Saint-Amour — and here comes the common refrain: five plays later, the Jackets scored. This time it was Oliver from five yards out. 52-17, Tech.

In two third-quarter possessions, Louisville turned it over once and punted the other time, managing just 52 total yards (60 through the air, minus-8 on the ground).

With Georgia Tech’s reserves in the game, Louisville would rack up 180 of its 483 total yards in the fourth quarter. But the final period still had a defensive highlight, as the Jackets got a pick six for the second-straight week. This one would go a little longer than last weekend’s three-yard return by Saint-Amour, as Juanyeh Thomas (also a true freshman but not to be confused with Charlie) cut in front of a  pass on the left sideline and took it 95 yards to the house for his first-career touchdown. 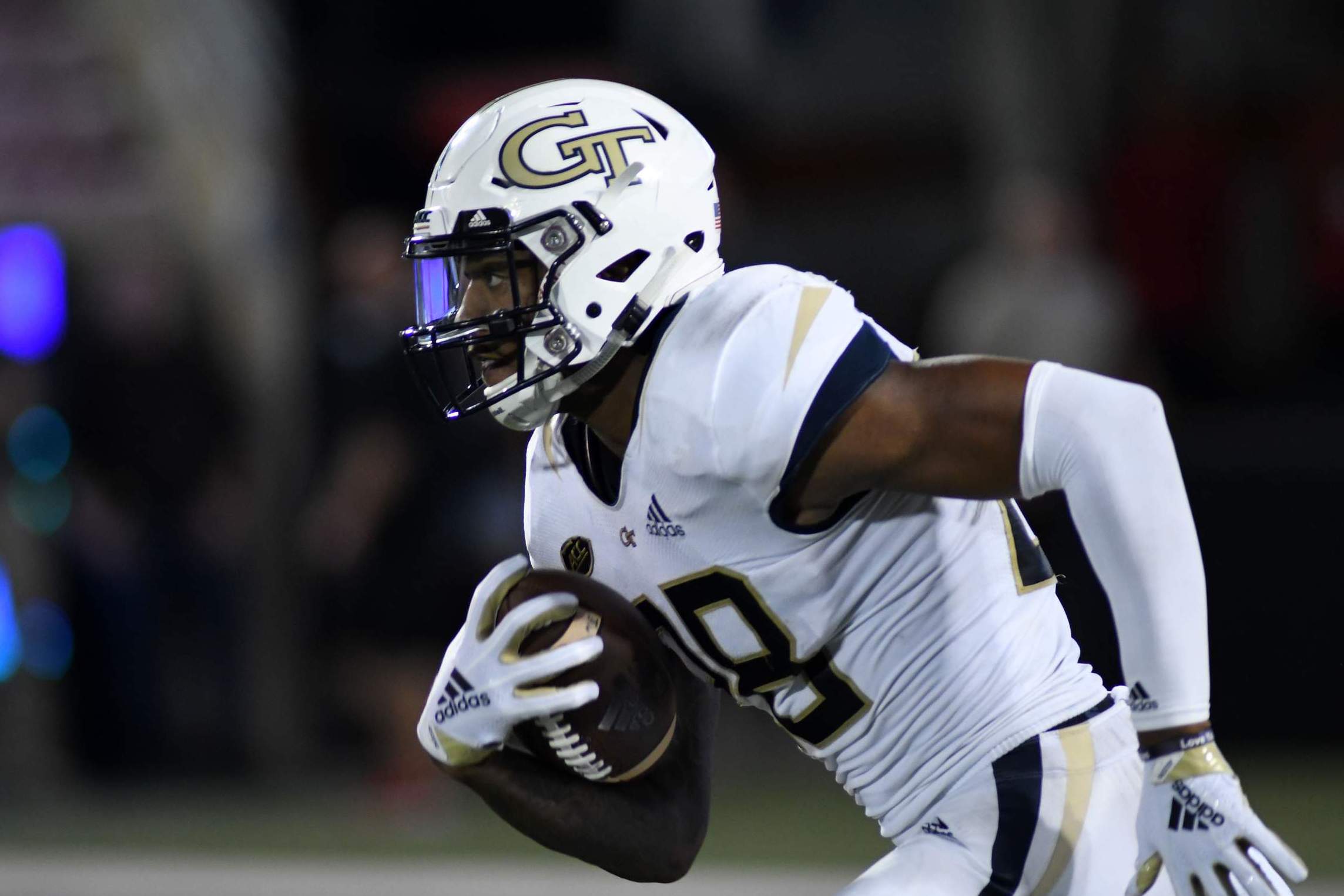 “That was good for him,” said Johnson, of the freshman, who had a similarly long kickoff return for a touchdown called back due to a penalty the previous week. “That series was a train wreck defensively. They let [Louisville QB Jordan Travis] run the ball all the way down the field. He must have made 40 people miss. To see Juanyeh break under there, he’s pretty fast. I knew they weren’t going to catch him.

“Defensively there are a lot of things we can fix,” he added. “We talked at halftime because we kind of lost the momentum [at the end of the half], that the opening drive was going to be big. You come out there and hold the ball for eight minutes or nine minutes and get the touchdown, then we come back and got the turnover and put that one in and that kind of was lights out.”

Saint-Amour likes where the defense is and feels the unit is only starting to shine.

“I feel like it’s everybody’s getting used to the defense,” he said. “People are fitting where they’re supposed to fit and when that happens, when everything kicks into gear, everybody individually can make plays. I feel like I’m fitting the scheme of the defense and just feeling it more, understanding the formations of the other team, knowing when the pass is coming, knowing where I can cheat and get to hit the gaps.

“Everybody’s flowing, fitting into their spots,” he added. “One of my sacks today, if [nose tackle] Brandon [Adams] doesn’t get up field and push the pocket, then I wouldn’t have been able to get there. So everybody’s doing their job and everybody’s fitting where they’re fitting and that’s going to help us out as a whole.”