Leah Thomas first reported for work at Georgia Tech in 2003 as an anomaly — a “director of nutrition” — for the Athletic Association, and now, she’s bordering on legendary status while shaping the diets of Yellow Jacket student-athletes.

Back in the day, Thomas was something of a special addition to Tech’s athletic department as there was less concept of diet among athletes beyond, “eat healthy,” which at the time might have been as simple as avoiding fried foods and fatty substances.

A lot has changed, and Thomas is at the forefront of a national push to improve the fuel that student-athletes put into their engines. Examples of that extend to the men’s golf team, which carries special goodie bags into competition, designed specifically by Thomas to make sure they keep their energy consistent all the way to the 19th hole.

“When I first started in 2003, I was one of a dozen or 15 in the country. We didn’t even form an organization until about 2009. We all kind of knew each other,” she said. “Now, in the Power Five [conferences], just about everybody has a dietician on staff. It has grown tremendously.”

As her role at Tech has grown over the years, Thomas has remained committed to nutrition. She was put in charge of the Total Person program in 2008 and promoted to assistant athletics director/student-athlete development in 2018.

Still a runner – she was a cross country and track star at Chattanooga and qualified for the 2004 U.S. Olympic marathon trials a year after earning a master’s degree in exercise science from Georgia State – Thomas has a special connection with all of Tech’s student-athletes.

She was there a couple years ago, in Raleigh, when the golf team faded down the stretch at an NCAA regional and missed the nationals by a single shot. So, she spent the summer of 2018 researching golf nutrition.

That was something different, perhaps because as golf coach Bruce Heppler said of his sport, “it’s not running up and down.”

Thomas learned that while golfers do not exert themselves as strenuously as, say, football, basketball or tennis players, they do work longer than all of them. Heppler suggested that a competitive outing, from warmups to completion, could go “six or six-and-a-half hours.”

And those players walk their entire rounds – no carts – and carry their own clubs.

That’s why Thomas came up with snack packs, which the golfers embraced immediately.

“Cause-effect relationships are kind of hard to prove, but she felt bad (after watching the Jackets fade in the Raleigh regional). And unbeknownst to me, she took the whole summer and researched golf nutrition because of the duration,” Heppler said. “She kind of asked if she could make a presentation [to players] before last fall.

“She came in and talked about what she’d learned. The first couple hours, she said, ‘These are the types of sugars and carbohydrates you should be burning.’“

Thomas was involved in the 2009 founding of the Collegiate and Professional Sports Dieticians Association, and she recently won the 2018 CPSDA Excellence and Perseverance Award.

She’s helped grow the nutrition program for student-athletes, aided by a change in NCAA regulations in 2014 that allowed athletic departments to offer more than three meals a day and a few snacks.

Now, on the ground floor of the Edge Center and just around the corner from the training room, there is a nutrition center, in addition to the expansive dining hall on the second floor where the student-athletes eat their traditional meals. Even on a recent summer day, there were several athletes there, chatting and snacking.

“During the school year, this place is packed,“ Thomas said. “We have yogurt, three flavors of milk – which are great for recovery. There are individual packs of trail mix. We have peanut butter crackers. We have smart popcorn, and two kinds of granola. We provide almond milk and soy milk to make smoothies with because we have frozen fruit. There are mangos, pineapple, spinach, blueberries and strawberries.”

This is a lot different from when men’s basketball coach Josh Pastner was a student-athlete at Arizona a couple decades ago.

“The difference now is more individualized and on shopping,” the coach said. “Leah will go with you to the grocery store and educate you on what to buy with the labels and everything else.”

Pastner suggested that rising junior point guard Jose Alvarado has improved by learning from Thomas the value of breakfast and also replacing sugary drinks with water.

Thomas doesn’t suggest the same plan for everyone. There are variances depending on sport and body type. “Power” athletes, like football players, benefit from a greater percentage of protein in their diet.

“The difference is the carbs, protein and fat are adjusted for what you do,” Thomas said. “A Friday night, pre-game meal (for football) would still have a good amount of carbohydrates and a good amount of protein.”

Several micro-nutrition centers exist at Tech’s athletics facilities, like at the golf practice range, the basketball Zelnak practice center and at Russ Chandler Stadium, where baseball players who have the munchies can fuel up. 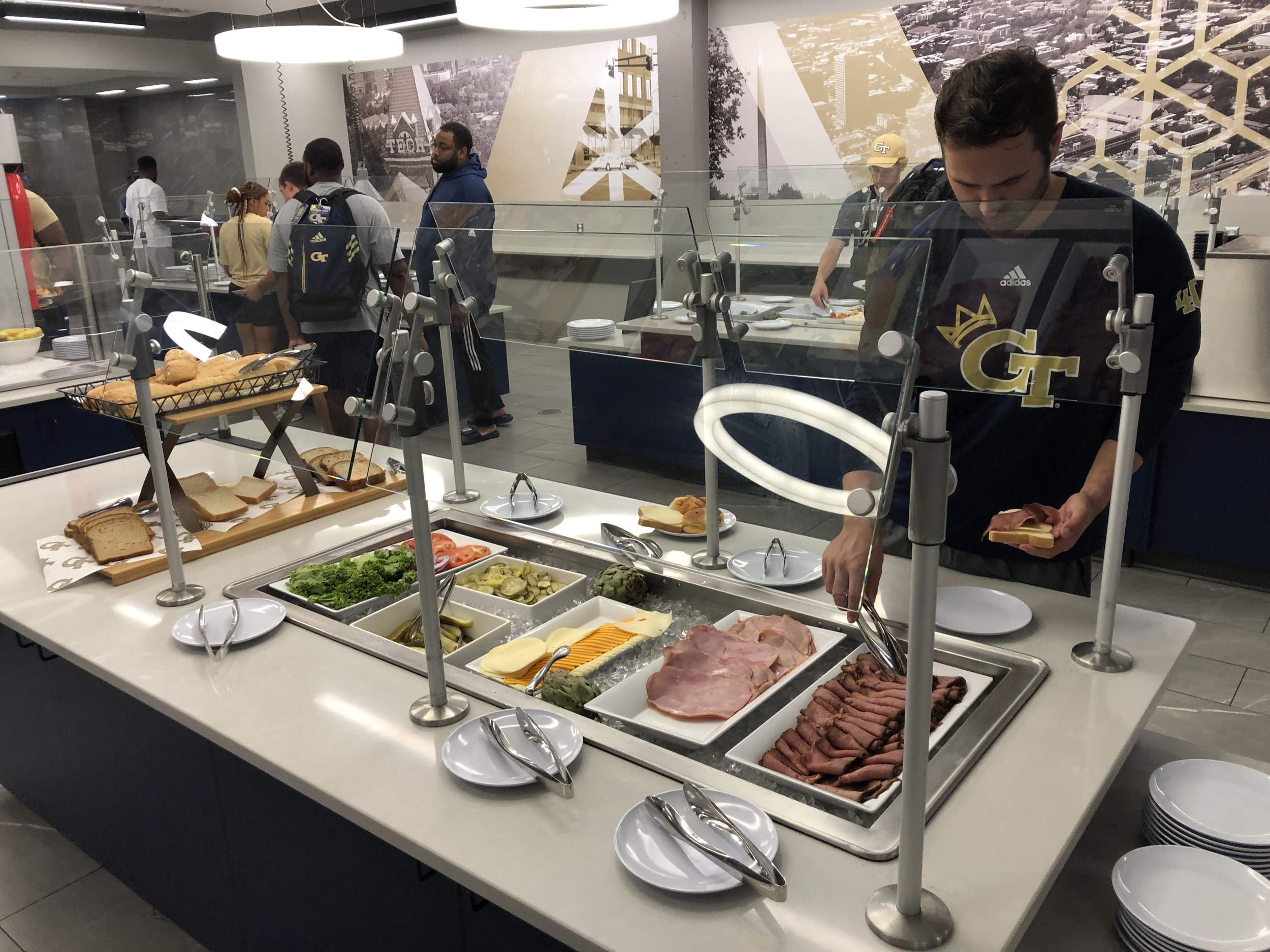 When it comes to competition, it’s important to eat early. That’s actually not new knowledge; it just happens that it’s being more widely embraced.

“When I started at UNLV [as an assistant golf coach in 1989], there was a guy named Keith Kleven, who was the physical therapist and our strength coach,” Heppler said. “And I’ll never forget. He said if you get hungry, it’s too late, because the time to process that, the round’s over, the event’s over.”

Thomas will verify that – even with a few decades of science added – it’s true. Eat.

“Basically, your body is going to need 30 to 60 grams per hour of carbohydrates, which is the quick energy,” Thomas said.

That’s a basic suggestion, and for student-athletes who compete quickly – like track and field athletes or swimmers and divers who might compete in one event that comprises 20 minutes or less – the in-game nutrition is not a significant factor.

But Thomas and her trusty assistant, Chandler Knox, work long hours to feed Tech’s student-athletes throughout the calendar and on game days. Hydration is a constant focus.

Rising senior golfer Tyler Strafaci is on board with all of it. He so loves the snack packs that Thomas has designed that he continued using them while competing on the summer amateur circuit.

Among all athletes, squeeze apple sauce is a big deal and “Honey Stingers” are as well. They’re carbo/sugar-rich snacks that are especially popular, as are “Uncrustables” (pre-packaged peanut butter and jelly sandwiches).

“It’s like apple, banana and a piece of beef jerky,” said Strafaci. “Early on, you definitely notice a difference.”