There was a lot of buzz around Rose Bowl Field on Thursday morning.

Music was blaring. There  were interspersed whistles, yells and cheers of encouragement.

Maybe best of all, there were footballs in the air. Lots and lots of them. Georgia Tech spring practice was under way and there was great energy and enthusiasm for it.

The energy and enthusiasm was also catharsis for student-athletes and coaches, whose emotions were still raw from the tragic loss of beloved teammate Brandon Adams, only five days ago.

“These kids are amazing,” said head coach Geoff Collins. “For what we’ve gone through the past four days, what these young men have gone through for the past four days, to come out here and the way they work, the way they positively affect each other, they genuinely loved Brandon Adams, as we all do, but they’ve come out here and really attacked the work.

“It’s just a special group of young men,” Collins added. “I’m so proud of how they’ve bought into the culture. The big thing is they understand that we love them, we care about them and we want what’s best for them as student-athletes and as young men. The way they’ve attacked, even through some heartache and some adversity, has been pretty special.”

Also special is the way the team pays tribute to “Big B.” They circle at midfield both before and after practice and do a special rallying cry for him. Once practice begins the team further honors Adams by dedicating themselves, getting down to business and learning Collins’ new offensive and defensive schemes.

“It’s been tough. I feel like some guys are dealing with it better than others,” admitted sophomore quarterback Tobias Oliver, the Jackets’ leading returning rusher and most experienced quarterback in terms of game action, having played in 12-of-13 contests last season with one start. “The guys that are dealing with it are picking other guys up. We’re doing it all for Brandon.”

“He was a close friend,” said junior QB Lucas Johnson (below). “We’ve all really come together as a group. It’s something that we all just had to come together and pick everybody up. We’ve been getting through it. I think we’ve been doing right by him so far.”

Learning a new offense would be hard enough, especially going from one so ground-oriented as Paul Johnson’s scheme to a more balanced approach under Collins, but doing so while grieving just makes things so much harder. But the vibe in the first two practices has been upbeat — not to mention up-tempo — and the positive energy and willingness of  the entire offense to learn has impressed.

The team has made good first steps so far.

Getting on the field to practice has been therapeutic and doing so in the morning has been especially nice — Collins credited the academic staff for its deft balancing act to work practice time in for the estimated 40 or 50 players with noon classes.

“[Practices] have been great,” said Oliver (below). “There’s so much energy. We’re out here for almost two-and-a-half hours but it goes by, it seems like an hour with all the energy. I love it. 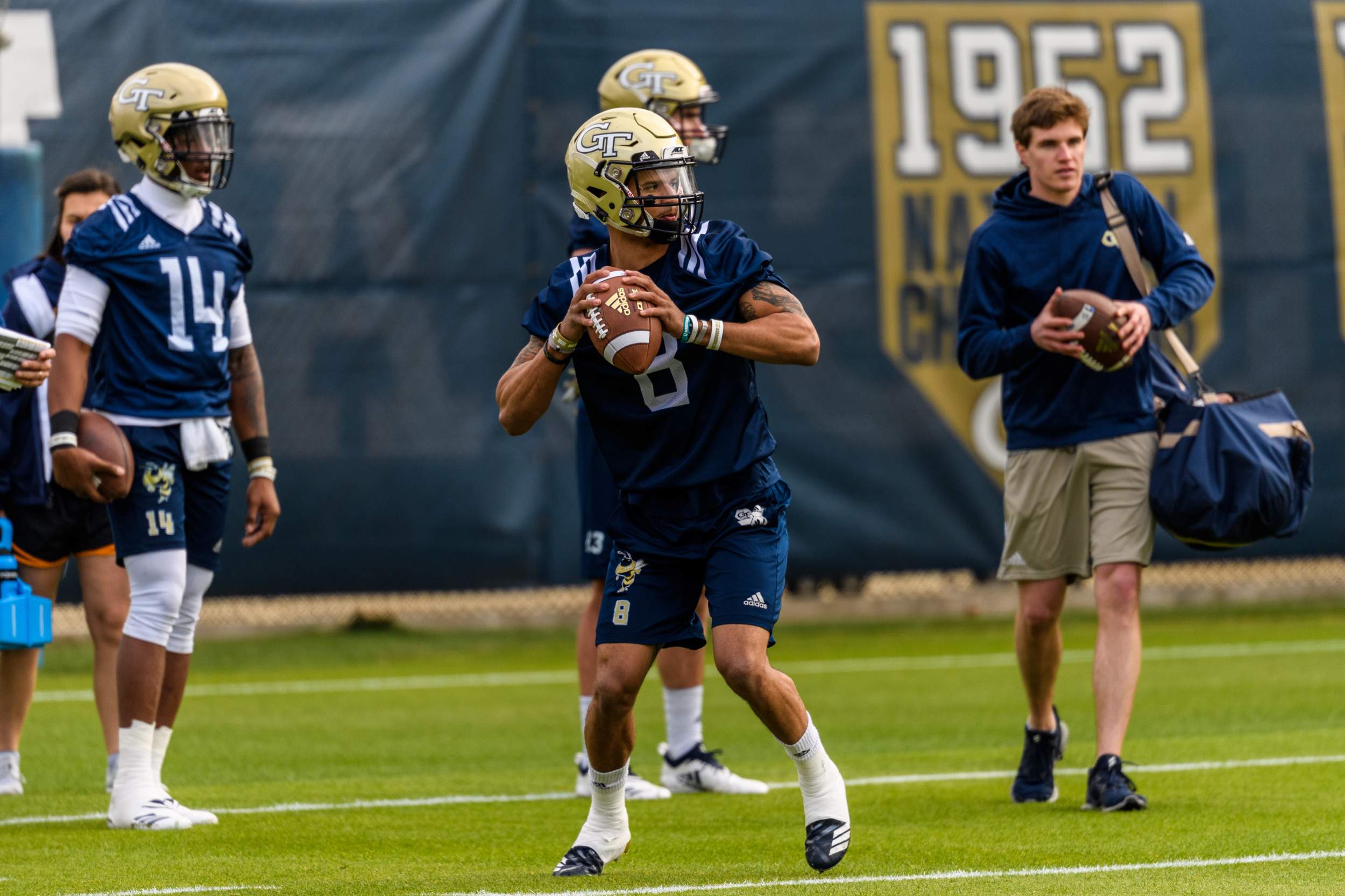 “It’s a much different scheme, obviously, but everybody’s picking it up pretty well,” he added. “We’re flying around, It’s been good.”

“The tempo, a lot more energy, switching, a lot of 7-on-7 and lining up against the defense,” said redshirt freshman James Graham, who saw action in three games last season. “Just a lot more energy, and just flying around. You don’t even notice.”

What you do notice is an electric energy and atmosphere, which has been enhanced by music playing throughout — the players’ music, as Collins gave each player a request form. It’s part of what has made practice fun.

You know how they say about time flies when you’re having fun.

In addition to the music and earlier start time, a lot of what’s made the practices fun is that time hasn’t been the only thing flying.

The players have been as well, frequently flying into each other and occasionally causing their passion to boil over into extracurricular skirmishes.

“I think the big thing is the way they handled it,” said Collins. “There were some 1-on-1 skirmishes but they broke it up and then they were dapping it up and loving each other. It was heat of the moment. But it’s exciting to see the passion and the intensity even though we’re in just our jerseys and shorts. The guys have a little bit of an edge to them.”

Also flying were footballs, something the quarterbacks really loved.

“I love throwing the ball,” said Graham (below). “In high school, I threw it a lot … coming in [my true] freshman year, we didn’t really throw it like that, but I’m ready to throw it and show the world what I’ve got.” 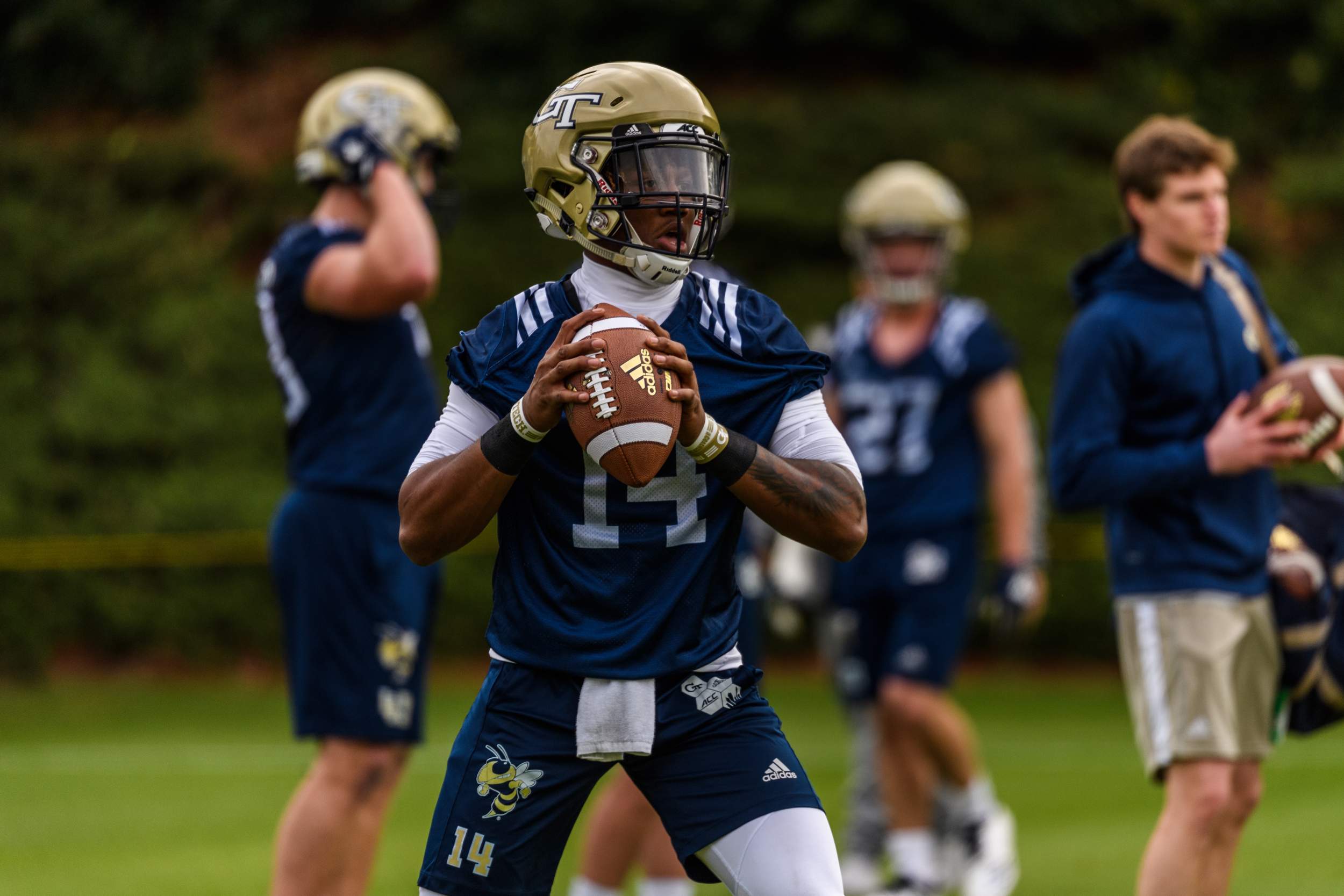 “It’s very similar to what I ran in high school. So far, it’s really good,” said Johnson, who played in nine games in 2017 but suffered a leg injury in last year’s first preseason scrimmage that forced him to miss the entire 2018 season. “It gives us a chance to drop back and just throw the ball. It feels good. It feels like my old days. I feel like we’re all starting to come together and mesh. I’m real excited in what we can put out there on the field.”

Patenaude isn’t surprised about the quarterbacks’ enthusiasm and is as enthusiastic about their competition.

“Which one doesn’t [like throwing more]?” said Patenaude, breaking into a smile. “The misconception is that these are quarterbacks who are running guys who can’t throw. If you just watched our practices the last two days, that’s a fallacy. Those three guys can really throw the football. All three of those guys are really, really good.”

That doesn’t mean Jackets signal-callers won’t run. Just not as frequently. The goal is a near 50-50 run-pass ratio.

While an attack even approaching 50-50 run-pass may seem like a 180, Patenaude assures that the Yellow Jackets won’t be too pass-happy and will take advantage of the skills that the previous staff saw in these quarterbacks.

“We have some really, really good, athletic quarterbacks, so it would be kind of counterproductive to take those guys out of that role. But we’re going to run the ball downhill,” he said. “We’re a power-running team. We’re going to get as many double-teams as we can, try to knock the guys back on the defensive line. The thing I love about our guys up front is they’re really aggressive. They’ve learned how to fight and scrap and really come off the ball in the triple. So a lot of those things they’re really good at. You have to be able to establish a downhill-run game to be able to get the quarterback to do all the RPO (run-pass option) things and the zone-read things and some of the quarterback runs off the inside zone.”

One thing the quarterbacks also want to establish is that they don’t see too much of the “Takeaway Cruzer,” a gold bicycle that is ridden after practice by a defender that created a takeaway that day.

“You won’t be seeing that much in the spring,” said Oliver, deadpanned,

The team will not practice on Saturday, as they will head to Tennessee as a team to attend Adams’ funeral.

“It’s going to be really hard day,” said Patenaude. “In the short time that I was here, he was such an amazing kid. I would walk through the locker room all the time, he’d be in there with a big smile on his face. That’s the thing that I’m going to miss and our guys are going to miss. But by being together and going through the mourning process — and Coach Collins is doing an unbelievable job of keeping these guys together and having them understand exactly what this process entails — is going to help.”

Saying goodbye to Adams on Saturday won’t mean that his teammates say goodbye to his memory. He’ll inspire his teammates and be remembered by them every day this spring and throughout the fall.