The Flowers Invention Studio is one of the places where Georgia Tech students and the professors that guide them work, quietly and for long hours, doing things that change the world.

Head football coach Geoff Collins might consider renaming the John and Mary Brock Football Facility and the Hugh S. Spruill Strength and Conditioning Center “re-invention studios,” as that’s where Georgia Tech football student-athletes and the coaches and staff that guide them have worked for long hours (although often never quietly) creating a new culture and doing things inside that will change the Yellow Jacket football world.

The former has already begun. The latter is not far off.

Judging the historic transformation of Georgia Tech’s football season based on just one season is short-sighted at best. Just ask anyone who’s ever invented anything — inside Flowers or anywhere else — and they’ll tell you that achieving success is a process.

Following a proven formula works, and Collins’ formula is proven.

“Obviously, I’m very upset about the loss. I’m extremely devastated by having to say goodbye to those seniors,” Collins said after last Saturday’s season finale. “But I’m extremely optimistic of the team that come Jan. 5, when we have our first team meeting, [everyone] is going to be in that room with the right attitude, the right mindset and has had all of these cumulative experiences together on how to play big-time ball and how to push us over the edge.

It led to breakthroughs and monster games like the one redshirt freshman safety Jaylon King had when forced into action against Georgia with the injury to Tariq Carpenter (a career-best six tackles, a tackle for loss, a pass break-up and recovery of a surprise onside kick in the second quarter), or the one true freshman redshirt freshman Jordan Domineck had the game before against NC State (10 tackles, 1.5 for loss), an effort that earned him ACC Defensive Lineman of the Week.

“Getting out there, I realized communication on the field is key,” King (below) said. “We are really young on both sides of the ball. Transitioning defense as well as offense, and just the amount of effort and passion this team has even with all the adversity that we faced, I feel very confident from the fight that this team faced that we will go into next season with a better mindset and more outcomes that result in wins.” 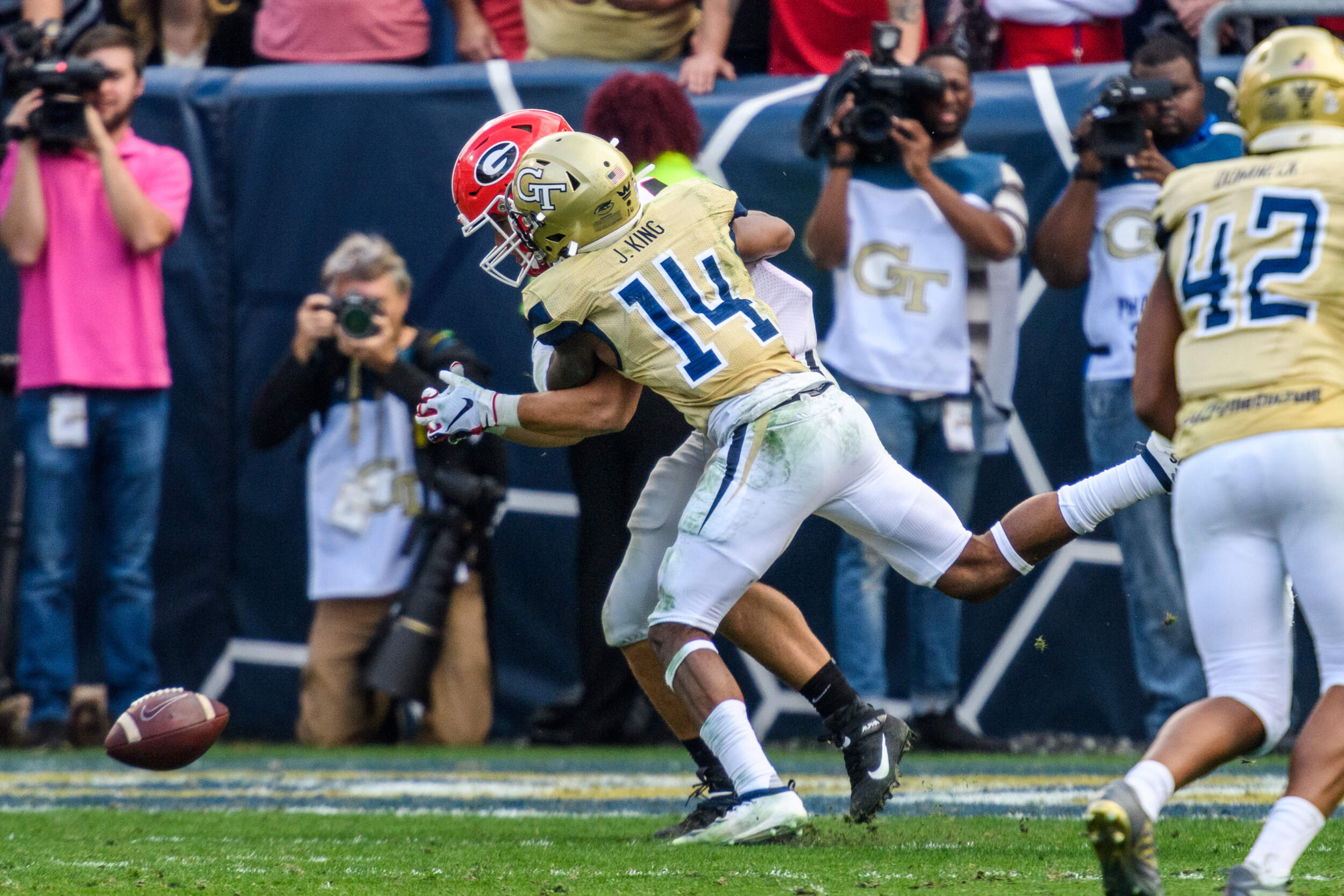 Junior linebacker David Curry what fight he saw out of a defense that only had two seniors on the entire roster (DB Christian Campbell and DL Brentavious Glanton), featured eight freshmen and sophomores in its starting lineup against Georgia and still played valiantly against the fourth-ranked Bulldogs, going into the half trailing just 17-7.

“That’s very encouraging to me, [particularly] how well we stopped the run today, especially in the first half,” said Curry after the finale. “Coach has just taught us that no matter what situation, to just go as hard as you can. No matter the circumstances, just keep on attacking. I think that the team, has really worked on that and we have gotten a lot better at that. No matter the circumstances we came to fight every single snap.”

Redshirt freshman quarterback James Graham, who didn’t start until Week 5, came on strong. He put up three of the program’s top seven games for completions over the past 11 years and three of the Jackets’ top four games for TDs thrown (3) since 2016. His top target, true freshman Ahmarean Brown, ranks second in the FBS amongst freshmen for TD catches (7) and tied Calvin Johnson’s Georgia Tech record for touchdown receptions by a true freshman. Malachi Carter (below), Adonicas Sanders and converted quarterback Tobias Oliver, all sophomores, also showed good chemistry with Graham. Sophomore running back Jordan Mason, who ran for 899 punishing yards and seven TDs, was named third-team all-ACC. 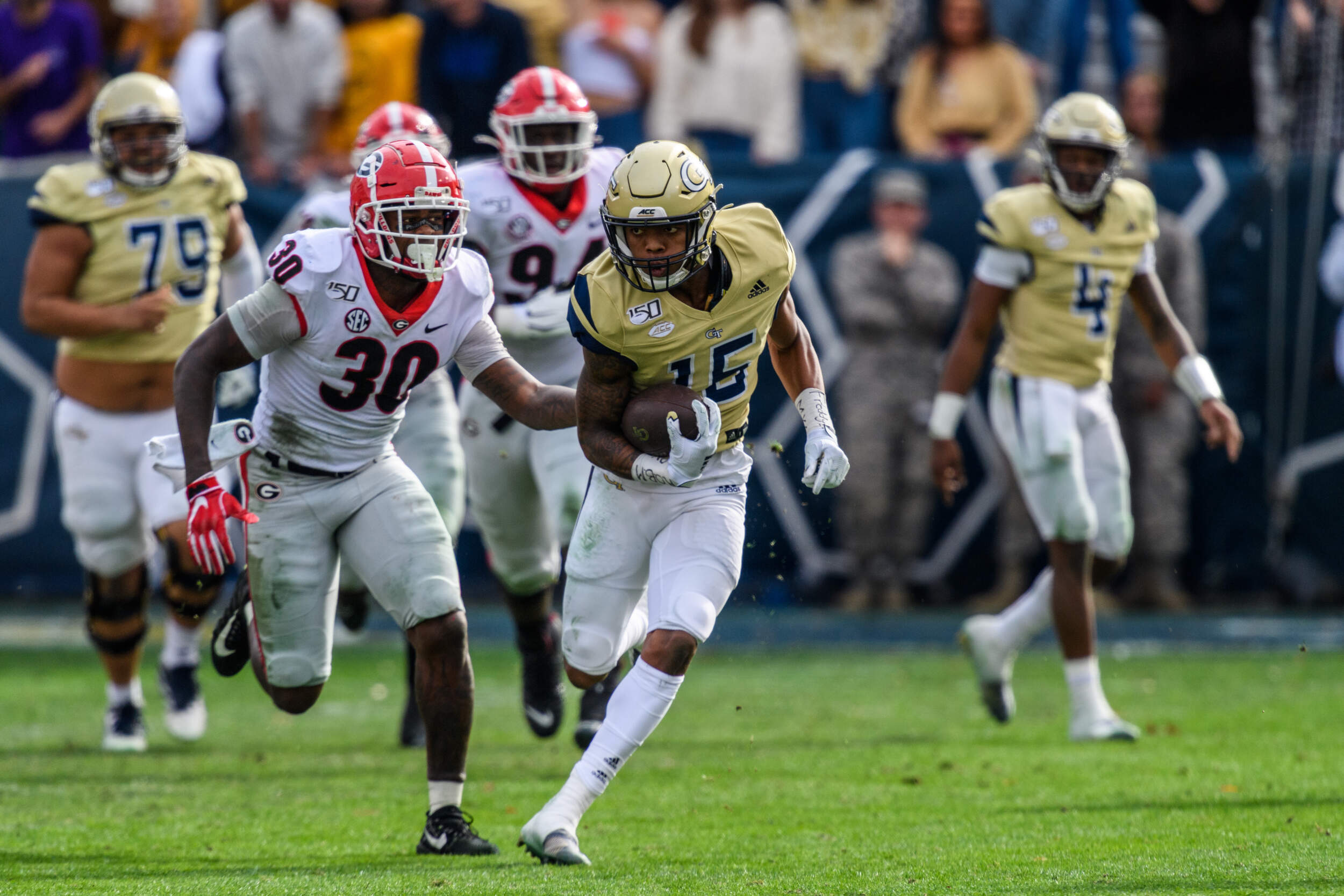 In addition to being the position most affected by the change to a NFL-style spread attack and being hit especially hard by injuries (with three walk-ons seeing significant playing time throughout the season), the offensive line surrendered one or less sack in three of the final four games of the season, including none against ACC Coastal Division champion Virginia, none in a win over NC State and just one against Georgia’s highly touted defense.

The Jackets may have been out-experienced and, in spots, out-manned (playing without as many as 14 “Above The Line” players in several games down the stretch), but they were never out-worked or made excuses.

“The whole thing this year has been completely learning experiences,” Collins said. “None of the guys panicked. They were just, ‘Okay, here’s who’s out there playing. We’re going to go out there and battle and compete.’ They did that and we’re going to continue to do that moving forward. The nice thing is we get, really, most of those guys back.

“We don’t make excuses. It’s a ‘next man up’ mentality and that has paid off,” he added. “The thing that you can never discount is the culture that’s been set, the foundation that’s been set, the mentality that we’re just going to put the ball down and play, regardless of adverse circumstances, regardless of the score, regardless of how big the opponent is, we’re going to compete. I think our guys have done it all year. It is something to be commended, it is something to be admired, and I do. They’ve set a groundwork for what this place is going to be moving forward based on that foundation.”

The eight-member senior class, the second-smallest in America but perhaps the most impactful, was rightfully credited for laying that foundation.

“Our new culture is, of course, maximum effort,’” said Curry. “It’s guys like (seniors) Tyler Davis and Tyler Cooksey with the tight end group. I mean, those guys are leaving a legacy of just how to do it. We’ve seen how our younger guys are developing faster and faster. A lot of these top-tier programs, they have a depth because their young guys are able to play faster, and so I think the culture is right around here and it is only going to get better and better.”

Davis was sad to leave but proud of what he’s leaving behind and his hand in it.

“These guys are so bought-in. They are there every step of the way,” he said. “They want to do everything possible to give everything they have every single day. I think that is what I’ll take with me the most, is how proud I am of these guys. Never quit, no matter the record, no matter the score, the dudes on this team just fight every day. Things are just going to continue to go up. This offseason, the guys are going to have a little sour taste in their mouth off the season and I know they’re gonna work harder than they ever have here, so it will be exciting to see what they can do.”

Tech fans got a preview of 2020 and beyond as some of its youngsters took baby steps in 2019.

“We’ve been really, really smart with our plan of how we were getting certain freshmen their four games (the maximum games allowed without burning a redshirt season),” Collins said. “[Cornerback] Jordan Huff, who’s a true freshman, played a ton (against Georgia). This was his fourth game. [Nickel] Wesley Walker, this was his fourth game. Michael Lockhart did not play because we got him his last game against NC State. He’s going to be an elite defensive tackle in this league for us. So a lot of the young guys that we systematically played or redshirted, I’m excited about their development, getting real-time reps against good teams is going to really, really, really pay off.”

There’s already been a payoff in recruiting, as recruiting efforts have Georgia Tech likely to land a top-25 class, and they’re not nearly done.

“It is getting us back in the conversation to make sure that this is a destination spot for elite recruits,” he said. “The cool thing is — and I’ve said this before — we’re not just recruiting talent. We’re building a program with the right players that choose to come to this great institution. Then the culture that we’ve established by these great seniors takes over and adds the spark for us to have a lot of success.

“The foundation is laid,” he added. “We’re ready to get in here and get to work because they know the expectations. They know the things that we have to do to be the elite program that we’re on our way to being. The people that get it and the people that understand what we’re going through, what we inherited, the situation, completely get it. [They] see the progress that we’ve made every single week all season. The ones that don’t want to get it, they’re not going to get it.”