There’s something special about the postseason.

The reward for a successful regular- and conference season, postseason is the ultimate competitive challenge, pitting the best against the best. It’s a time when teams and players can do the remarkable under the most intense pressure.

Yet each run is unique and seemingly takes on a life of its own.

The 2018 Georgia Tech women’s tennis team’s run certainly qualifies as one such run.

“I was so proud of the girls and so proud of the team with how hard they worked,” said head coach Rodney Harmon, who was in his sixth season as head coach of the Yellow Jackets. “It was definitely a special year. We played so many top teams, went through so much adversity at different times, were able to win against some of the best teams in the country.”

“We all just had so much fun that year,” recalled then-sophomore Kenya Jones, who went 25-10 in singles and 27-8 in doubles partner Paige Hourigan — the pair earned All-America honors and was the nation’s top-ranked team in final ITA rankings. “All I can really think about was how exciting it was and how every time you stepped on the court, you knew you were playing for something bigger than yourself and how we were all fighting so hard for each other. There was just so much love on every single court for every single one of us. It was a really, really fun time.”

All the winning the Jackets did made for that fun. They finished 25-6, 12-2 in ACC play, finishing tied for second. They started the season ranked No. 7 in the nation, peaked at No. 2 nationally and never fell below 12th — only staying out of the top 10 for a week. They won 12 times dropping only one-or-fewer matches, and 19 times losing two-or-fewer. Dominating opponents was the result of a balanced team, in which no one player truly dominated.

“We had such a solid lineup from top to bottom,” said Nami Otsuka, then a sophomore, who went 29-9, 23-6 in dual matches, and 5-0 in NCAA Tournament singles. “Every time I stepped out on the court with them I knew we were going to win. During NCAAs I was able to have the most confidence I’ve ever had in my life when I was playing and just the most amount of passion.”

“We collectively knew we were pretty strong early on,” said Victoria Flores, who completed her freshman season in 2018. “Most of the season we knew we were contenders. At ITA National Indoors that year we beat Florida for the first time and we were just one of the top teams already, so I think that kind of gave us confidence throughout the whole season. Toward the end we all noticed that we started to play better week by week.”

The Jackets, who had three All-ACC performers in Hourigan (first team), Jones (second), and Johnnise Renaud (third), entered NCAAs rather ornery, after falling to North Carolina, 4-3, in the semifinals of the ACC Championships.

While the Jackets re-focused and belted in for a long NCAA Tournament run, Harmon remembered that plenty of people chose then to hop off the bandwagon.

“When the draw came out, they saw we were playing Pepperdine, which had gotten to the finals at Indoors and they were saying, ‘Oh, you guys got a bad draw,’” he said of the Waves, who had beaten Tech, 4-2, on Feb. 10 to get there. “People voted and I think 80, 90 percent picked Pepperdine to win that match. They had a great team. One of their players, Ashley Lahey, got to (NCAA Individual championship singles) finals, another (Mayar Sherif Ahmed) got to the semis, another one got to the quarters (Luisa Stefani). That let you know how good their team was.”

The Jackets were good, too, especially at Ken Byers Tennis Complex, where they were 10-1 during the season — the only loss a hard-fought 4-3 loss to Miami — and where they’d start NCAAs. They easily made it 12-1, overwhelming Eastern Kentucky then Winthrop by 4-0 scores, dropping a total of four games in six doubles matches and only one set in singles.

That advanced them to the quarters held at Wake Forest Tennis Complex. The Sweet 16 also was familiar territory, as Tech’s previous two teams advanced to the Sweet 16, but no further.

This time they were determined to stay around longer.

They’d do that — a LOT longer, literally in court time!

Over the next two matches, the Jackets would play nearly 10 hours (some of that due to rain delays), 30 singles sets, and 348 games.

First up was Pepperdine and what Harmon described as “one of the strangest matches” he’s ever seen.

The Jackets would drop the doubles point, but bounced back, behind wins by Otsuka, Hourigan, and freshman Ida Jarlskog, to take a 3-2 lead.

After Jones fell in a tough three-set match with Lahey, the match came down to Flores on court 6 against junior Dzina Milovanovic. The freshman took the first-set tiebreaker but dropped the second set, 3-6. The third and deciding set was big, but was not too big for her.

“I just remember enjoying every second,” Flores recalled. “Every time I looked down at the courts, at my teammates, at the scoreboard, it was electric. Then it came down to my court. When you’re playing at night and all the lights are on you, all the eyes are on you, it’s a feeling that you can only get in that experience. That was one of the most fun matches ever in my life.”

“I was already cramping toward the ends of the second set,” she recalled. “Once I started the third set adrenaline had kicked in. I was just trying to give whatever I had in the tank, every single point. In between every point I looked to my teammates, I looked to Rodney. I tried to relax and they helped me kind of calm down because when you’re cramping, the worst thing is to get freaked out. I was just thinking, ‘You’re going to do everything you can to win this match.’”

She’d break at 3-3 and close out the match, 6-3. The Jackets were headed to the Elite Eight. 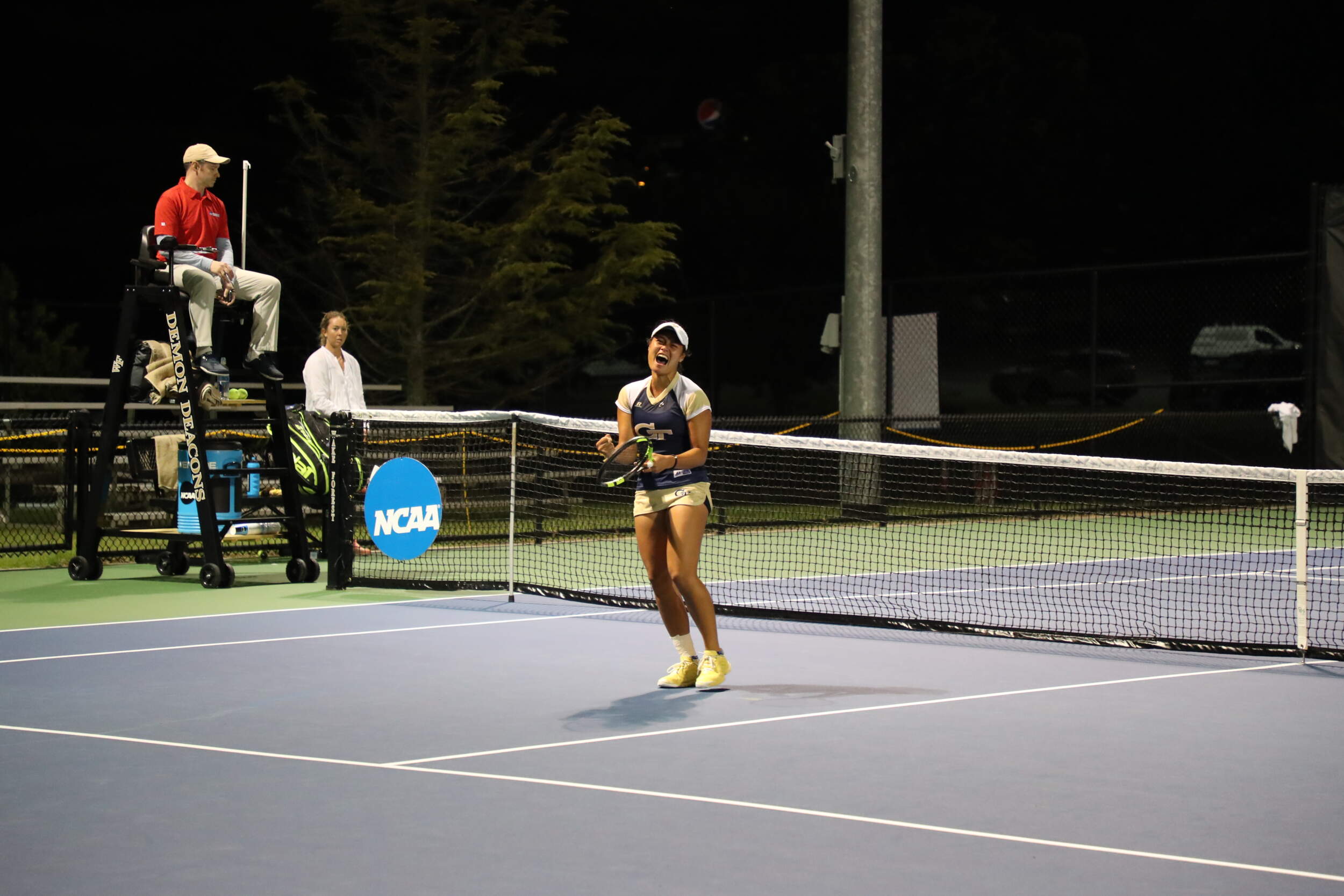 Waiting for them there was No. 14 UCLA, the school they’d beaten in the 2007 NCAA Finals, and, more recently, at the previous year’s ITA Kick-Off Weekend held at Byers.

Unlike the last meeting and most of the season, the Jackets dropped the doubles point. It was the first time all season Tech had surrendered that point in back-to-back matches — they’d won it 22 times in 28 matches heading into NCAAs.

After Renaud evened the match with a 6-1, 6-3 win, Jones and Flores lost their matches, putting the Jackets on the brink of elimination, at 3-1.

“This was one of the most significant moments from a learning standpoint for me, because college tennis is about a team. You’re playing for something more than yourself,” Flores recalled. “I remember when I lost my match I talked to ‘J’ (Johnnise), our senior and I was like, ‘I’m so sorry I lost. We really needed my match. Now we’re down 1-3.’ She was like, ‘Vicky, you had us last time, now someone else will have us. You had our backs now this is where we have your back. This is the moment where the team picks you back up.’

Renaud would be right.

After weather caused a second rain delay, the matched moved indoors and the Jackets picked themselves up.

“We were down 3-1. The girls on the UCLA team were excited, “I was like, ‘No! I actually think we have them,’” Jones said. “Ida, Nami and Paige were still left on the court. If we needed anybody left on the court, it’s those three! They just had such great fight in them. It was just really cool to see and really cool to experience losing your voice every night because you’re screaming so loud for every single one of them. It was just really cool.”

“Wake and UCLA had its men’s team and a lot of their fans from the West Coast, so it was like a home match for them because they were yelling and screaming at us, indoors,” Harmon said. “They were yelling at me while the girls were playing, telling me, ‘Go sit down!’, ‘You don’t know what you’re talking about!’’ Those are great moments. I’ll never forget that as long as I live. That was very special.”

“Once Paige won her match I had no doubt that we were going to win,” said Otsuka. “I had the confidence to pull it out and I knew Ida was going to come back. So it was looking a bit iffy for a second, but I don’t think we ever lost faith and we just kept fighting.”

All eyes would then move to court 4, where Jarlskog would take on fellow freshman Abi Altick for a berth into the Final Four. Jarlskog took the first set, before Altick evened the match at love. The final set played out in slow motion — at least that’s how Harmon saw it.

Already up a break at 3-1, Jarlskog put the hammer down, holding serve then, in the eighth game, after falling behind love-40, took four straight points to close out the match, winning the final set, 6-3 and punching the Jackets’ ticket to the Final Four. 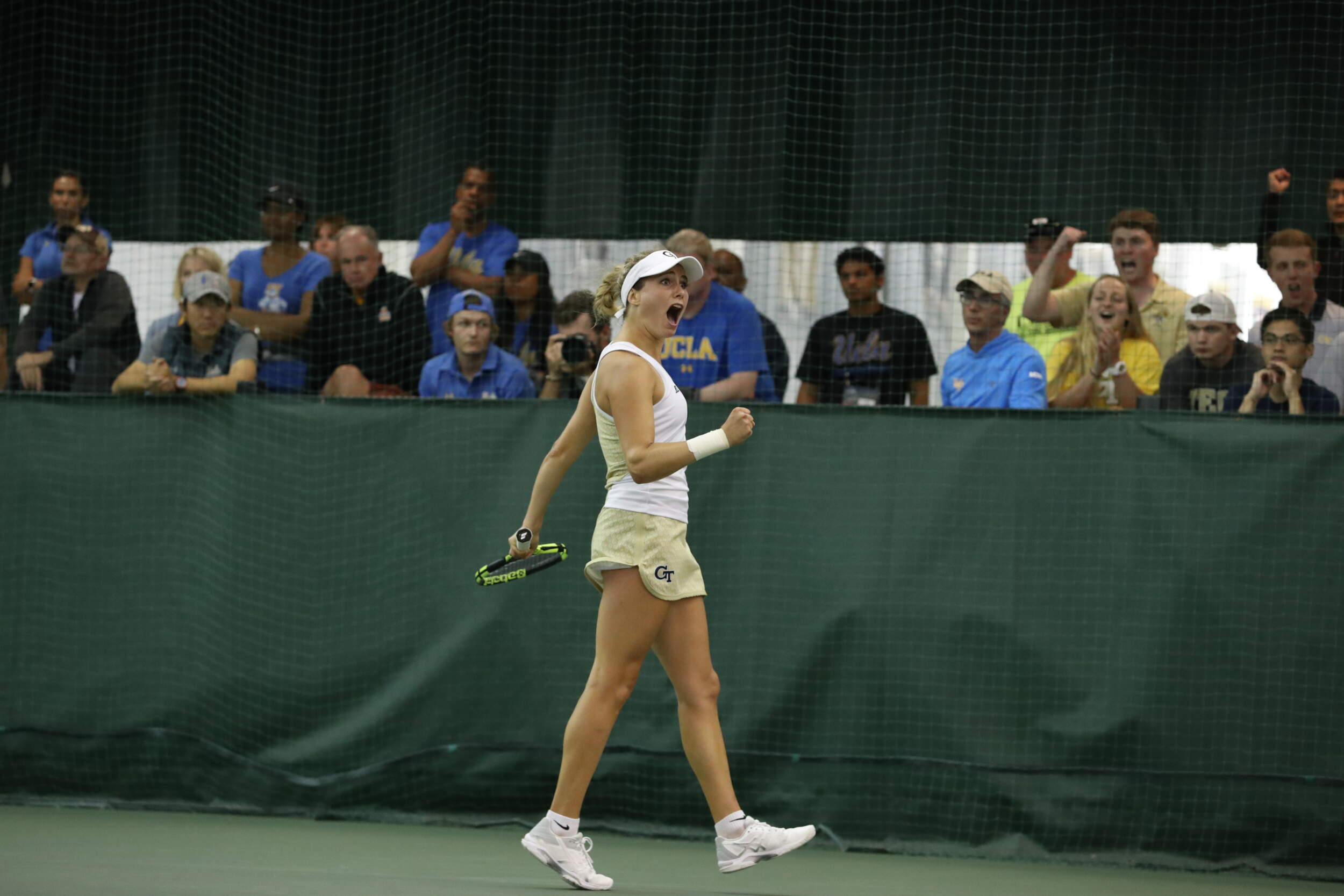 Against No. 2 Vanderbilt, the Jackets lost the doubles point for the third straight match, but again refused to go quietly, as Otsuka won 6-1, 6-3, to pull Tech to within 2-1, then Jarlskog closed the gap to 3-2, but they’d fall, 4-2.

“We rarely lost the doubles point. To lose it three times in a row was crazy and showed our resilience in those moments,” said Flores. “Vandy was another great match. It was, obviously, heartbreaking, but it was fun and it was electric, again. Until the very last point, when it was all over, we all still had that mindset of ‘We can still do this, no matter what.’ It was where the best parts of college tennis come from — you look at your teammates playing next to you and you’re like, ‘They’re going through it, so I can pick it up.’ That’s what motivates us and pushes each other.

“Every single person was so driven and we all put a lot of focus and our heart into our tennis,” she added. “There was just a lot of urgency every time we played. You’re like, ‘Okay, I know my teammates are playing for me and they’re leaving everything out the court for me, so I have to do the same. I have to match that exact energy and effort.’ That’s really all you really want whenever you finish a match, know you left it all out there for each other.”