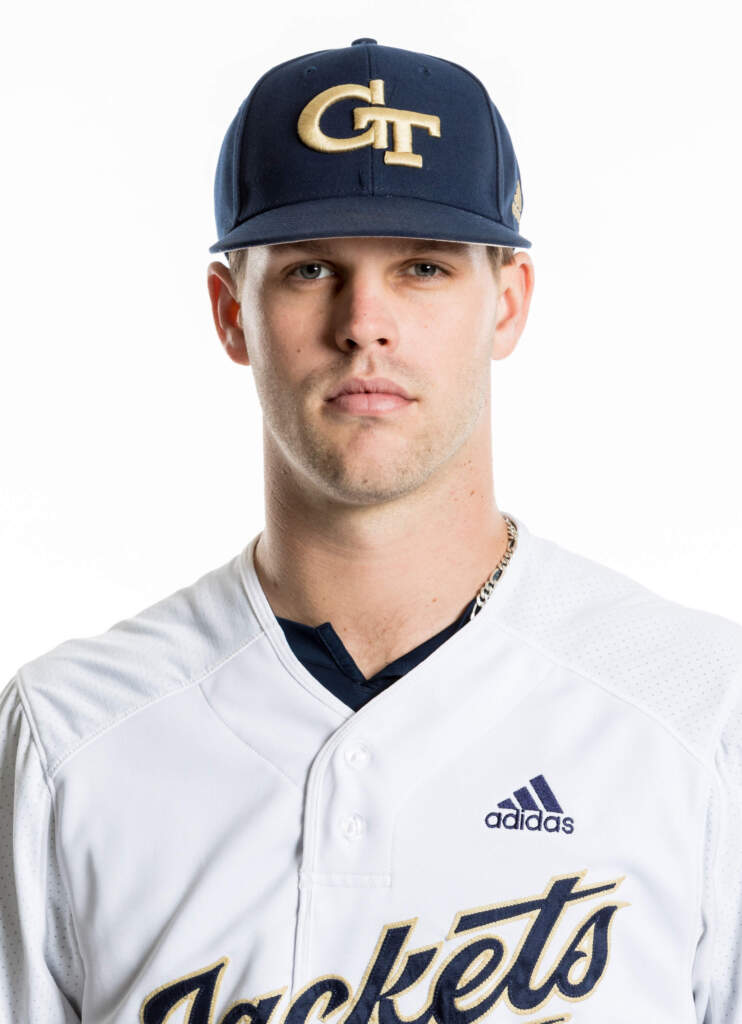 MLB Draft: Drafted in the second round by the Baltimore Orioles (68th overall) in 2015 but chose to attend Tech.

2019 (Redshirt Junior): Made 26 appearances as a major part of Tech’s bullpen – good for second-most on the team … Tied for tops on the team, recording a 9-2 record on the year … Finished third in the ACC for decision victories (9) … Finished with a 5.09 ERA on 53.0 IP, striking out 48 hitters and allowing just 30 earned runs … Made five-straight scoreless appearances (Feb. 22-March 8) that included two shutouts over then-No. 3-ranked and Los Angeles Super Regional host UCLA (Feb. 22, Feb. 24) … Recorded his two losses back-to-back (Virginia – March 15; at then-No. 4-ranked and eventual College World Series team Louisville – March 24) before turning a corner and rattling off seven victories … Tossed 3.2 scoreless in relief in 10-inning slugfest at eventual Starkville Regional participant Miami (Fla.) (March 8) … Dominated in 5.0 innings at Virginia (March 20), surrendering just two hits and punching out six in the 4-3 win … Also allowed just two hits in shutout 5.0 relief innings in the ACC Championship semifinal against then-No. 13-ranked and eventual Greenville Regional participant NC State (May 25) … Did not allow an earned run in 2.1 innings of work at home in the 11-6 win over then-No. 23-ranked and eventual College World Series team Auburn (March 16) … Allowed one or fewer runs in 18 of his 26 appearances … Only surrendered three home runs all season … Only allowed three of 14 inherited runs score all season … Pitched a better than 2:1 strikeout-to-walk ratio for the year.

2018 (Redshirt Sophomore): Appeared in 13 games, making one start for the Jackets … Went 0-3 with a 5.94 ERA over 16.2 innings … Recorded one save … Started versus Bradley (Feb. 17) on Opening Weekend, but did not factor in the decision … Picked up his first career save versus Southeast Missouri State (May 15), allowing one unearned run over 3.0-complete innings of work … Also threw 3.0-scoreless innings out of the bullpen in game two of the doubleheader against Dartmouth (Feb. 24) … Logged one scoreless inning versus Georgia State (April 11) … Struck out a season-high three batters over 1.1 innings in a loss at Pittsburgh (April 14) … Pitched out of the bullpen versus Illinois-Chicago (March 4), at No. 6 Clemson (March 10), at No. 13 Auburn (March 13), at home against Virginia Tech (March 18), versus Mercer (March 21), against No. 6 Florida State (April 6), at No. 8 North Carolina (April 21) and in the blowout win over No. 10 Duke (May 18).

2017 (Redshirt Freshman): Made nine appearances on the mound for the Jackets, making eight starts … Went 1-2 overall on the season … Posted a 5.68 ERA over 25.1 innings pitched … Recorded 20 strikeouts on the year, including a season-high seven strikeouts versus Marshall (Feb. 18) … Earned the win versus Belmont (Mar. 4) giving up two runs while striking out six over a season-high 5.0 innings … Threw 4.0 scoreless innings and struck out seven in a no-decision versus Marshall (Feb. 18) … Struck out five and gave up just one earned run on three hits in a no-decision versus No. 9 North Carolina (Mar. 18) … Pitched an inning of relief versus No. 8 Virginia (May 19).

2016 (True Freshman): Penciled in as Tech’s Sunday starter before season … Went 3-1 with 2.45 ERA in 25.2 innings before an injury derailed his season … Won each of his first three career starts — all 6.0 inning outings … Made his collegiate debut on Feb. 21 in a start vs. VCU, allowing one unearned run on three hits in 6.0 innings … Scattered six hits and struck out four in 6.0 shutout innings against UMBC on Feb. 28 … Third and final win on the year came after allowing one earned run on five hits with one strikeout in 6.0 innings vs. Western Carolina on March 6 … Made his ACC debut on March 13 at Florida State, allowing five runs on six hits in 3.2 innings … Final appearance came at home March 20 vs. Virginia Tech … Struck out a season-high five Hokies in 4.0 innings … Underwent season-ending surgery in April.

Before Tech: Four-year letterwinner at Flowery Branch High School under head coach Scott Myers … Maintained a 1.37 ERA and tossed 222 strikeouts over the course of his high school career … Named a third-team all-American by Perfect Game and was also listed as a first-team southeast all-region selection by PG in 2015 … One-year letterwinner as a forward on the basketball team under head coach David Sokol.

Personal: Has two sisters … Chose Tech because of the academics, the baseball program and the proximity to home … Majoring in business administration.