Georgia Tech’s basketball teams now practice and train in a facility that looks brand new, thanks to a rebrand and refresh project that was completed and unveiled in the spring of 2020.

With an eye toward helping Georgia Tech’s basketball teams with their practice scheduling and provide better resources for skill development, Tech originally erected the 20,000-square-foot basketball practice facility on a former parking lot in 2009. Ground was broken for the facility in April of that year, and the building opened in October. 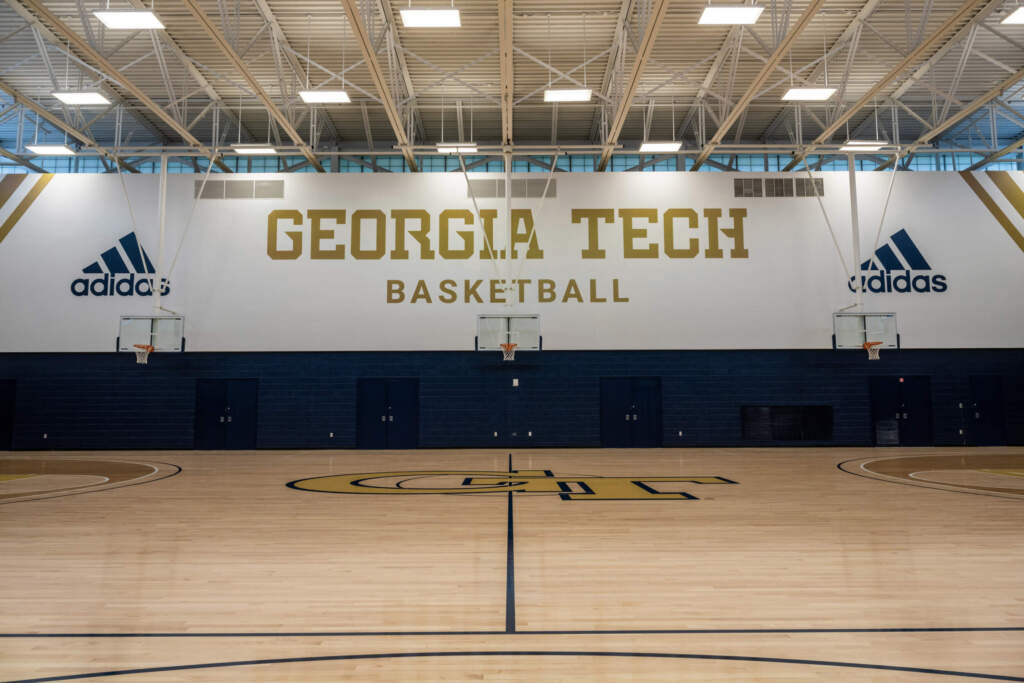 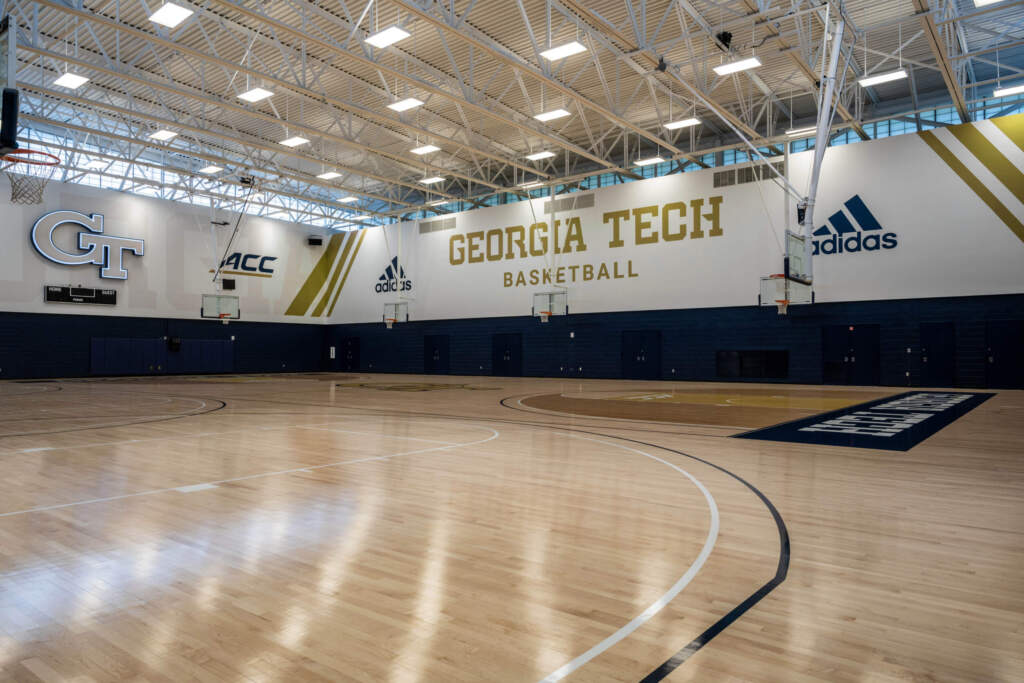 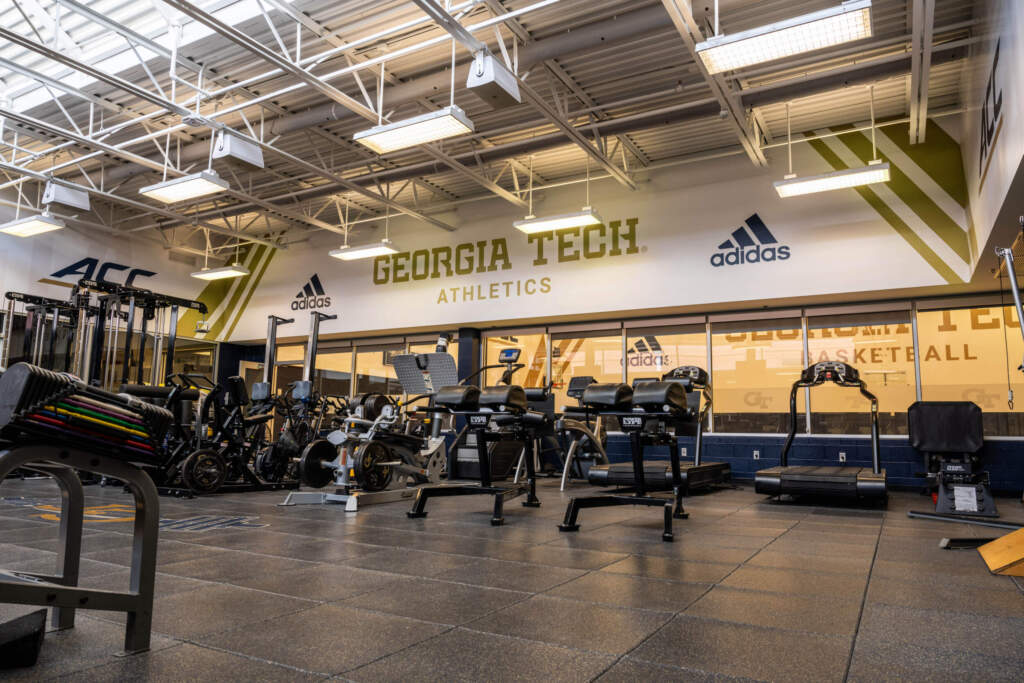 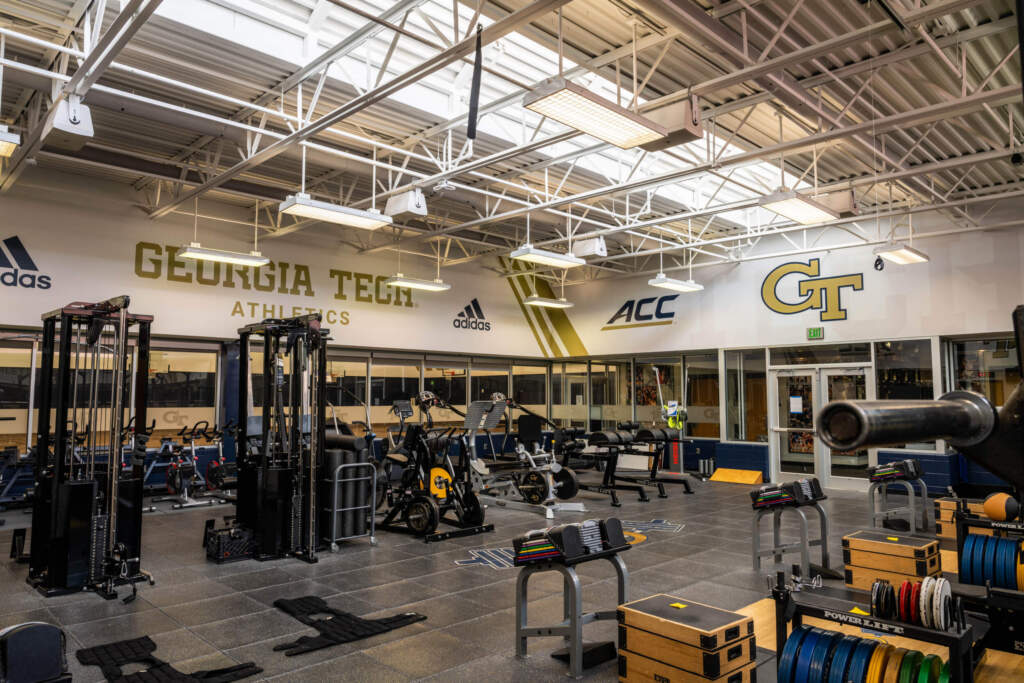 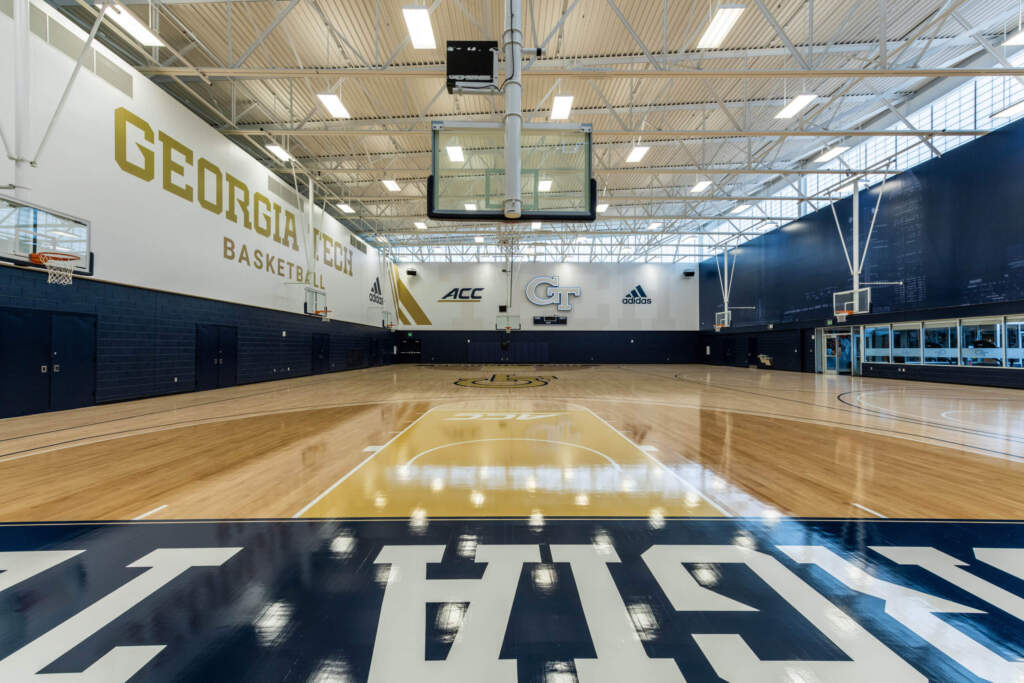 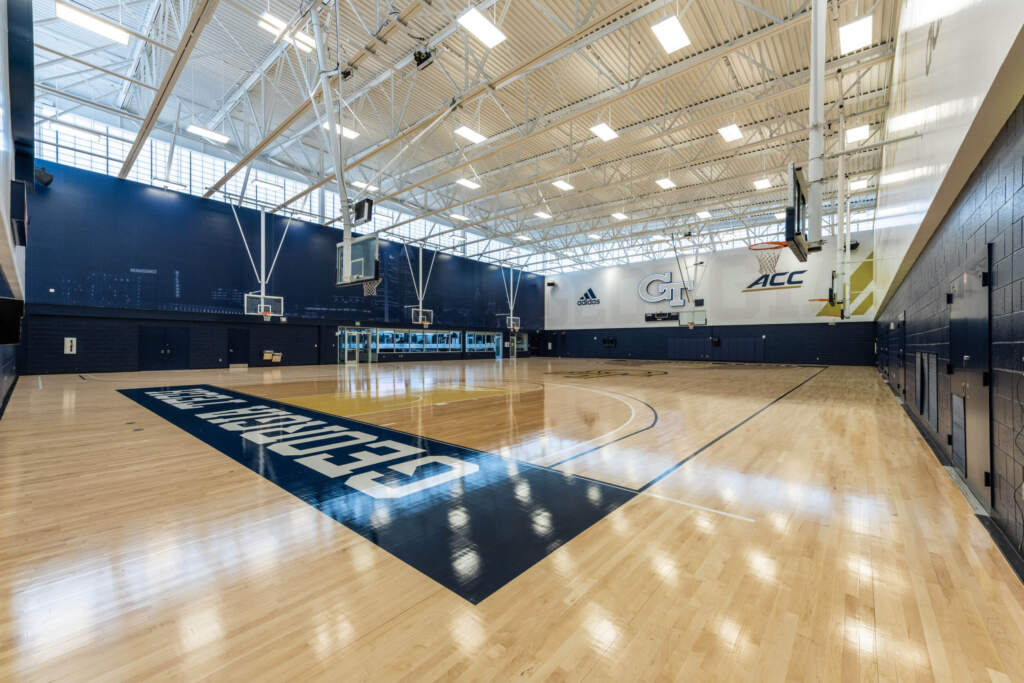 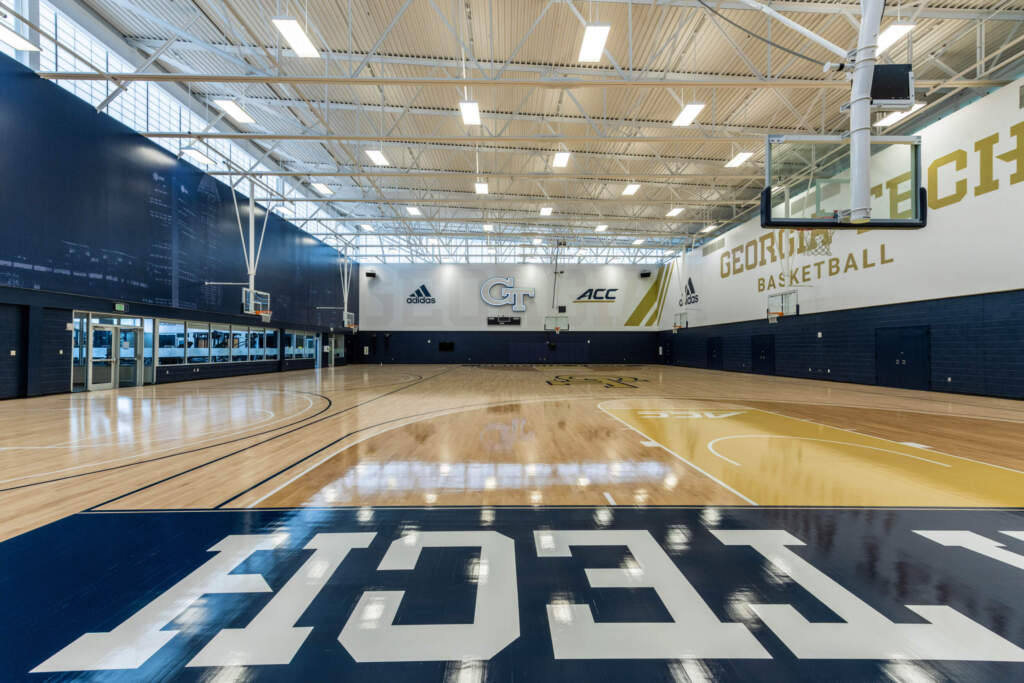 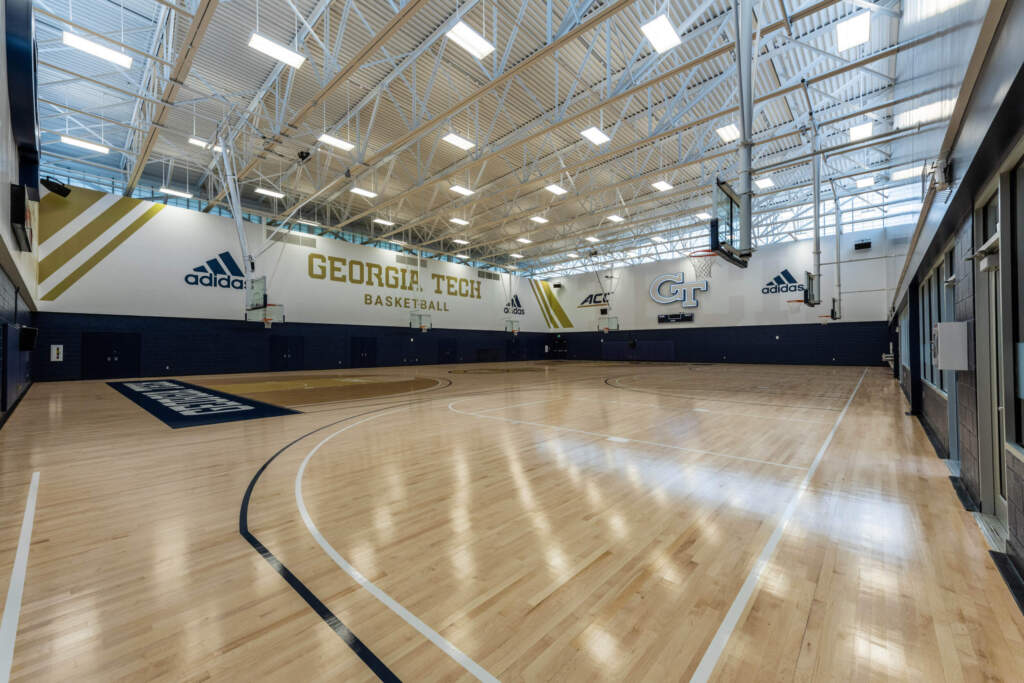 Where once the men’s and women’s teams both relied on the main playing court as their preferred practice facility, the Zelnak Center has allowed both teams to practice simultaneously. Incorporating a video teaching area as well as weight room in the new building allows for video instruction to be conducted in the same place where the concepts shown can be implemented is vital for player development.  To be able to go from work in the strength and conditioning room to the practice floor is just as important.

Spurred by a lead gift from Steve and Judy Zelnak, the facility was built at a cost of $5 million. Zelnak is chairman, president and chief executive officer of Martin Marietta Materials in Raleigh, N.C., and a current member of the Georgia Tech Advisory Board.

The Zelnak Center is connected to the southeast side of the McCamish Pavilion and includes floor space the size of one and a half basketball courts with eight baskets, a 24-seat theater for video instruction and the 2,500-square-foot Robert A. Anclien Strength and Conditioning Center. Heery International was the architect for the project, and Gay Construction Company of Atlanta was the contractor.

Georgia Tech required the project to target LEED Silver Certification, and was later certified Gold. The ample natural light that streams into the practice gym does more than just earn a LEED credit. Research has shown that well-lit facilities enhance performance. Beyond the ample windows, the gym and strength and conditioning areas were separated with glass to provide coaches and student-athletes with maximum viewing opportunities.  Blinds were built in to separate the men’s and women’s teams when needed.

The facility is popular not only with Georgia Tech’s current teams, but also with NBA and WNBA teams who occasionally use the Zelnak gym to practice when in town for games, and former Yellow Jackets who use the facility for their off-season training.