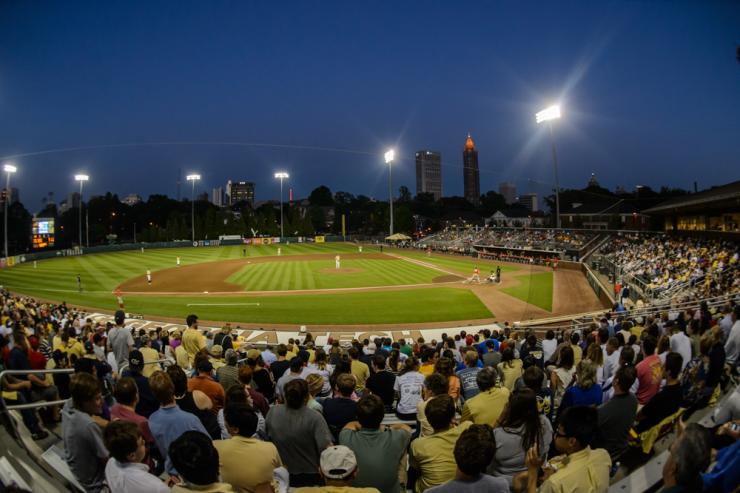 FIELD OF THE YEAR

Scenically nestled in downtown Atlanta, Russ Chandler Stadium provides a brilliant backdrop for college baseball and offers one of the best atmospheres for the game in the country.

The home of Georgia Tech baseball for nearly 90 years, Russ Chandler Stadium has a long and storied history, from its original construction in 1930 with funds from Tech’s 1929 appearance in the Rose Bowl game to its use as a training facility for the 1996 Centennial Olympic Games.

With incredible views of the Atlanta skyline, the facility underwent a $4.5 million renovation and expansion underneath the stadium. The Yellow Jackets’ locker, training and weight rooms were transformed to make Russ Chandler into a state-of-the-art, all-around facility. Tech’s locker room doubled to 2,000-square feet and renamed the Mark Teixeira Locker Room.

An anonymous $2.5 million challenge grant was the lead for Phase I of the Russ Chandler Stadium renovations. Phase II of the renovations, which includes further expansion of the team’s clubhouse facilities down the left-field line, has completed funding and is entering the final development stages.

Russ Chandler Stadium is the only college baseball facility in the country to be been named “Field of the Year” by the Sports Turf Managers Association three times. Russ Chandler remains the only baseball stadium in the Atlantic Coast Conference to have earned the honor, taking the crown in 2008, 2014, 2019.

At a current capacity of 3,718, Georgia Tech’s baseball facility more than doubled in size when the renovations were complete in 2002. Russ Chandler Stadium features approximately 1,100 chairback seats behind the home plate area in addition to more than 2,500 bleacher seats.

The facility features locker rooms for both Georgia Tech and the visiting team, as well as one for the umpires. Tech’s clubhouse, which is located on the third base side of the stadium, includes a player’s lounge, a video room where players and coaches can break down game film, and a separate locker area for the coaching staff. A state-of-the-art athletic training room is adjacent to the Tech locker room in addition to a sizeable weight room and workout facility.

The stadium features three covered batting cages and pitching mounds. One is located underneath the grandstand, while an enclosed area above the left field grandstand houses two additional cages and mounds.

A wide concourse and plaza area is located at the main entrance to the stadium behind third base. Ticket booths, concession stands and restrooms are located on both the first base and third base sides of the stadium.

Above the grandstand is the press level, which includes ample space for the writers and broadcasters who cover Tech’s nationally-ranked program. The main press box has seating for more than 30, while three auxiliary booths can accommodate television and radio crews.