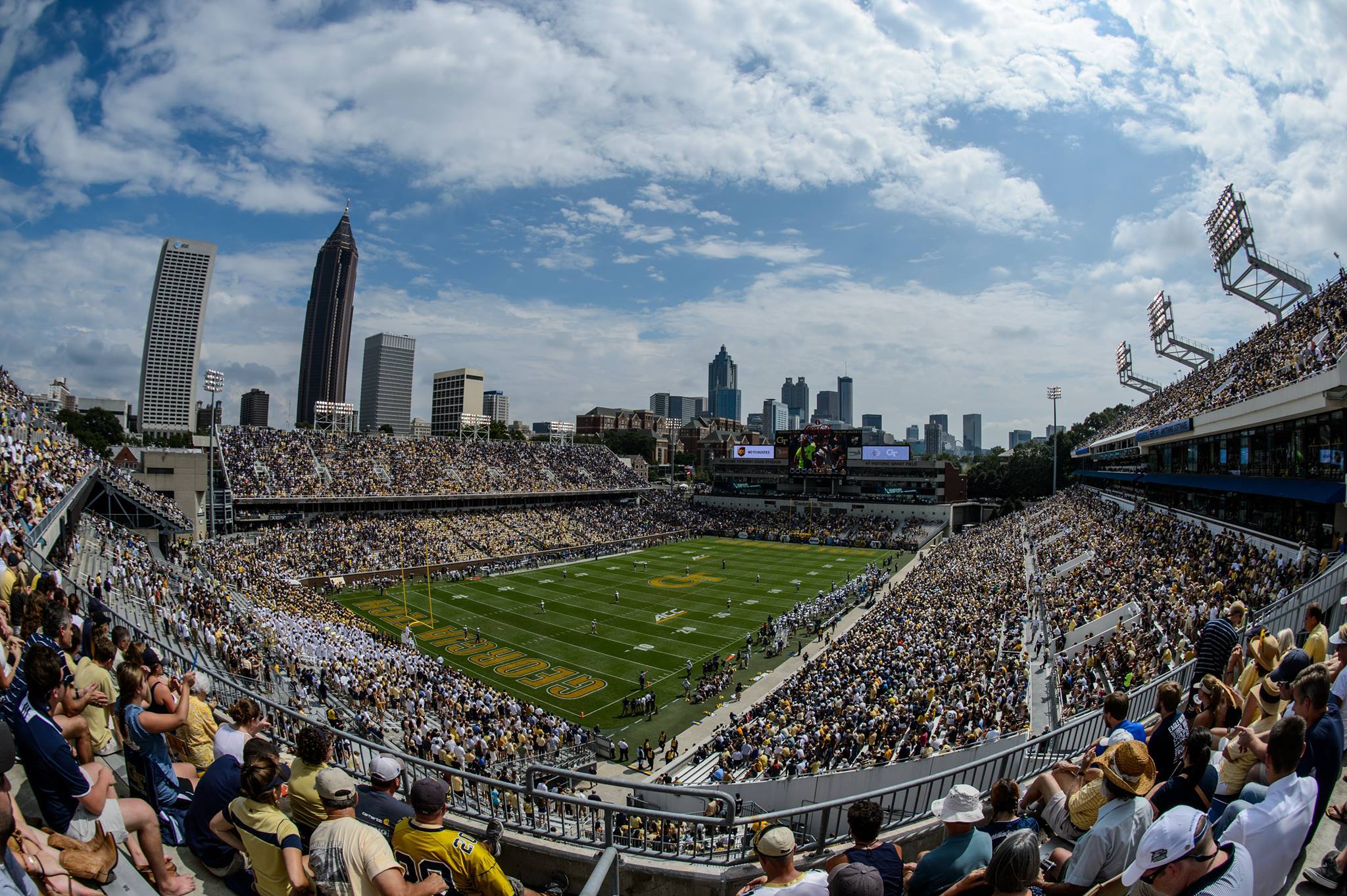 A Cornerstone of College Football for Nearly a Century

Georgia Tech’s storied football facility has been a cornerstone of college football for nearly a century. Cozily nestled among Atlanta’s skyscrapers, Bobby Dodd Stadium at Historic Grant Field is easily one of the nation’s most unique settings for college football.

Originally built in 1913 by members of the Georgia Tech student body, Bobby Dodd Stadium at Historic Grant Field is the oldest on-campus stadium in NCAA Division I-A, but the venerable stadium has recently added another chapter to its storied history with a new look and an expanded capacity.

The lower East seating area was rebuilt, and the new structure features 20 executive suites as well as 2,040 chair-backed club seats between the 25-yard lines and the Heisman Club Room, a private air-conditioned lounge for those patrons. The popular upper East stands remain in place with cosmetic improvements. 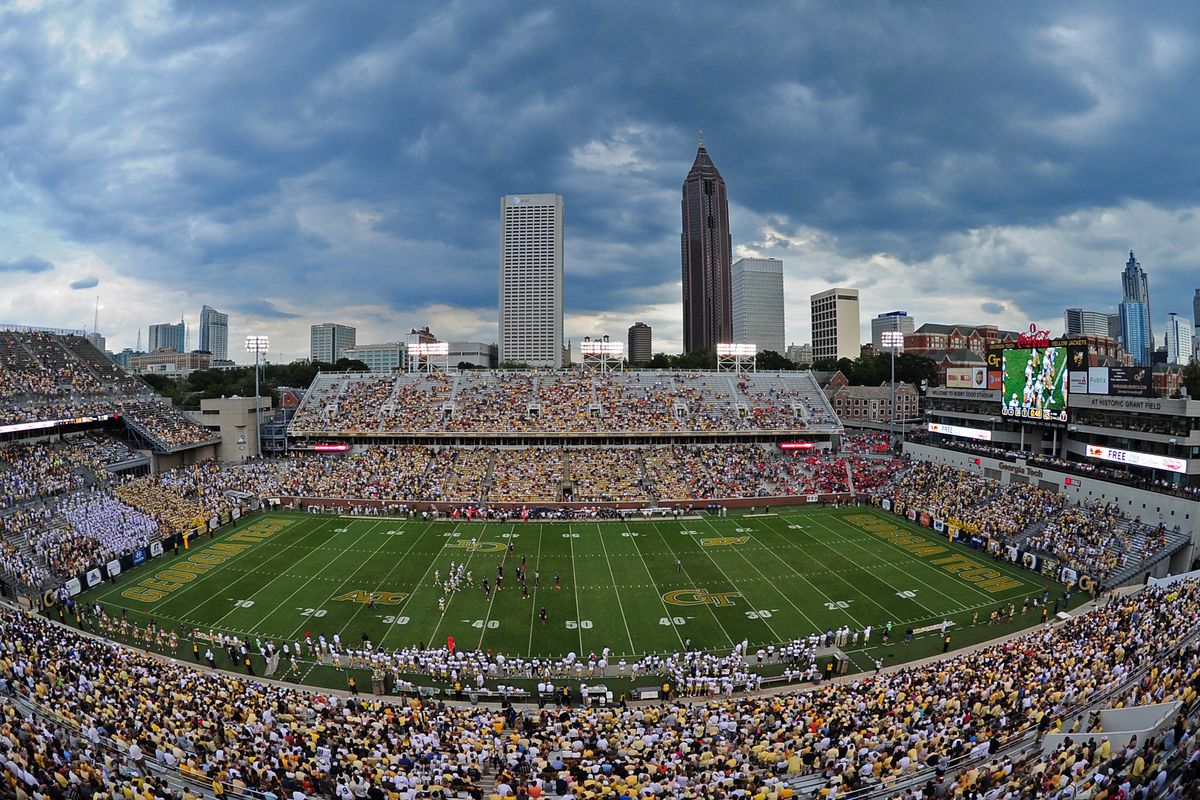 At the South end of Bobby Dodd Stadium, 2,970 seats were added in front of the Wardlaw Building, providing seating in the South end zone for the first time since 1985. The new South end zone seating and the lower levels of the East and North stands form a three-sided bowl.

Construction began immediately following the 2001 season, with the first phase completed for the 2002 season, when capacity was 43,719. The first phase saw the completion of the lower bowl seating in the South, East and North areas of the stadium.

A new natural grass playing surface and drainage system was installed, and the field was shifted approximately 30 feet to the north and 15 feet to the west.

Program management was provided by Carter/Turner, a joint venture of Carter & Associates and Turner construction, while HOK Sport was the project’s architect.

Georgia Tech’s football facility was known as Grant Field until April of 1988, when the Georgia State Board of Regents voted to add the name Bobby Dodd Stadium in honor of the legendary coach who guided the Rambling Wreck to its most illustrious football era. A member of the National Football Foundation College Football Hall of Fame, Dodd compiled a 165-64-8 record from 1945-66, and tutored 21 all-Americas as he led Tech to 13 bowl trips during his 22-year stay as head coach.

Dodd served as Tech’s director of athletics from 1951-76 and then worked as a consultant for the alumni association until his death in 1988 for a 57-year association with the Institute.

The name change was the first for the facility since it was named Hugh Inman Grant Field in 1914 after a gift from John W. Grant, a member of the Tech Board of Trustees and a well-known Atlanta merchant.

The Grant family did not give the land on which Grant Field is built. However, they did give the initial $15,000 used in 1913 to build the first permanent concrete stands on the west side of the field. In gratitude for the gift, the Board of Trustees named the field Hugh Inman Grant Field in memory of Grant’s deceased son.

The students who built Grant Field more than 90 years ago wouldn’t recognize the home of Georgia Tech football if they saw it now. Not only has the skyline around the stadium changed dramatically, but the facility has steadily grown and improved during its rich history.

Tech actually began playing football on the current site in 1905, but in 1913 the original concrete West Stands were built, primarily by Tech students, and seated 5,600. The concrete East Stands were completed in time for the 1924 season. A year later, the South Stands were finished, bringing the seating capacity to approximately 30,000.

Growth of the stadium has been steady through the years. In 1947, the West Stands were rebuilt, which raised the capacity to 40,000, and a new press box, then the largest in the South, was constructed. The all-steel North Stands were erected in 1958 to bring the seating to 44,105. 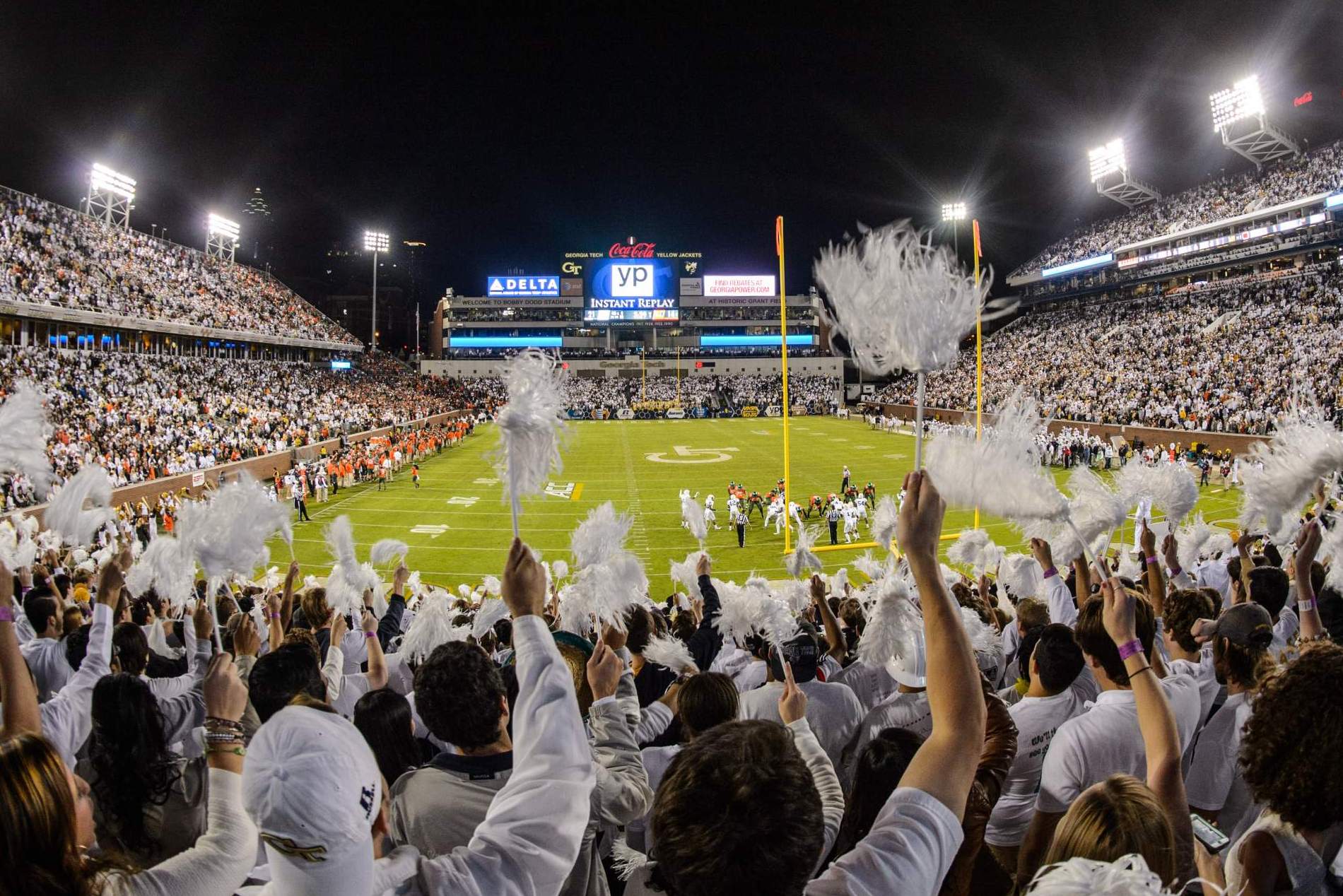 A second deck was added to the East side in 1962, increasing the stadium capacity to 53,300. The facility was expanded again in 1967, when the West Stands were doubledecked to bring capacity to its high of 58,121. That project also included new press and photo levels, including an elevator. New scoreboards were added prior to the 1982 season.

Following the 1985 season, the historic South Stands, which formed the familiar U-shape on North Avenue, were razed. In their place is the William C. Wardlaw Center, a multi-purpose facility for Georgia Tech’s athletic and academic departments that was opened for the 1988 season. Seating capacity was reduced to 46,000.

A major renovation of the stadium was completed prior to the 1992 season with the construction of the Bill Moore Student Success Center behind the West Stands, as well as the addition of 32 executive suites and the renovation of the President’s Box and press level.

This project also included the Roy Richards Festival under the West Stands.

Natural grass returned to Grant Field in 1995 after 24 seasons with artificial turf. The field was originally surfaced with Astroturf in 1971 and resurfaced in 1979, and then artificial All-Pro Turf was installed in 1988.

Bobby Dodd Stadium/Grant Field is located at the heart of the Georgia Tech campus on Techwood Drive, bordered by North Avenue on the south and Bobby Dodd Way on the north. Tech has hosted numerous crowds which have exceeded capacity, the largest of which was the 60,316 spectators for the Georgia game in 1973.

The largest crowd to see a game in the current configuration was at the 2006 season opener, when Tech hosted second-ranked Notre Dame before a crowd of 56,680.