THE FLATS – Georgia Tech athletics will install an artificial playing surface at Bobby Dodd Stadium, the home of Georgia Tech football, this summer. The removal of historic Grant Field’s previous natural grass turf began in late May and the installation of a state-of-the-art Legion NXT turf system with Geofill infill, manufactured by Shaw Sports Turf out of nearby Calhoun, Ga., is expected to be completed in late July.

The installation of an artificial surface will allow for Grant Field to be utilized on a far more regular basis than it currently can be. The new surface will expand opportunities for Georgia Tech student-athletes and teams to train and practice inside Bobby Dodd Stadium. Additionally, it will allow Tech athletics to host many more non-football events inside the stadium that are of interest to the Georgia Tech and Atlanta communities, including campus events, concerts and other sporting events. Financially, the installation of an artificial surface at Bobby Dodd Stadium will decrease expenses associated with maintaining a natural field while also providing opportunities for significant revenue boosts associated with hosting external events. No state funds are being used for the project.

Planning for the switch to artificial turf began in earnest last winter, after Georgia Tech announced that Bobby Dodd Stadium would host concerts by BTS and Guns ‘N Roses in May and August, respectively (the concerts were later postponed due to the Covid-19 pandemic). Those concerts would have required Georgia Tech to replace the natural grass surface less than a month before the Yellow Jackets’ Sept. 3 football season opener versus Clemson.

“I’d like to thank our long-time partners at Shaw for working with us to make this project a reality,” Georgia Tech director of athletics Todd Stansbury said. “Georgia Tech and Shaw have a long history of collaborating on various projects and we’re excited and grateful to work with them once again.

“While our outstanding grounds crew has consistently produced the nation’s best natural grass football field, Shaw Sports Turf’s Legion NXT turf system will provide our student-athletes with the safest, most consistent playing surface available today,” Stansbury continued. “Additionally, installing an artificial surface will allow us to utilize Grant Field 365 days a year, as opposed to the very limited number of events, practices and workouts that can safely be held on a natural surface. The switch to an artificial field will allow Bobby Dodd Stadium to continue as one of college football’s best stadiums, as well as become a space that the entire campus community can enjoy more often, and evolve into one of the Southeastern United States’ premier entertainment venues.”

“I’m grateful to our athletics administration, led by Todd Stansbury, and our friends at Shaw Sports Turf for all they’ve done to make it possible for us to install a state-of-the-art playing surface in Bobby Dodd Stadium,” Georgia Tech football head coach Geoff Collins said. “An artificial turf field will give us the ability to practice and train inside the stadium on a regular basis year-round, which will be a huge advantage as we prepare to play in the best setting in college football, Bobby Dodd Stadium in the heart of Midtown Atlanta!”

The Legion NXT turf system is Shaw Sports Turf’s newest fiber system. Including the exemplary ThunderBolt Fiber, Legion NXT is a hybrid system that offers realistic aesthetics with an electrifying degree of durability. The system is built for strength, pushing the envelope and providing endurance through even the toughest of matchups. It is 20 percent more robust and shows minimal signs of wear up to 80,000 lisport cycles. The Geofill infill system is 100-percent natural and plays natural, resulting in a perfect balance of vertical deformation, rotational resistance and energy restitution. The Geofill infill is made of coconut husks and fibers, which is a rapidly renewable resource. The infill also requires much less water than natural grass, thus resulting in significant levels of conservation. 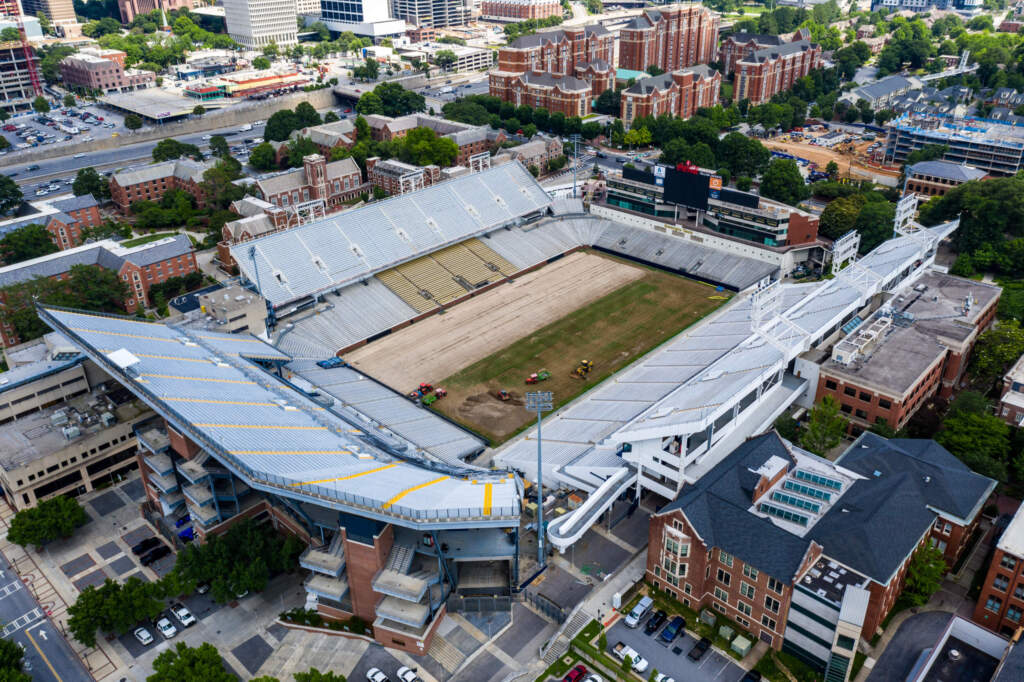 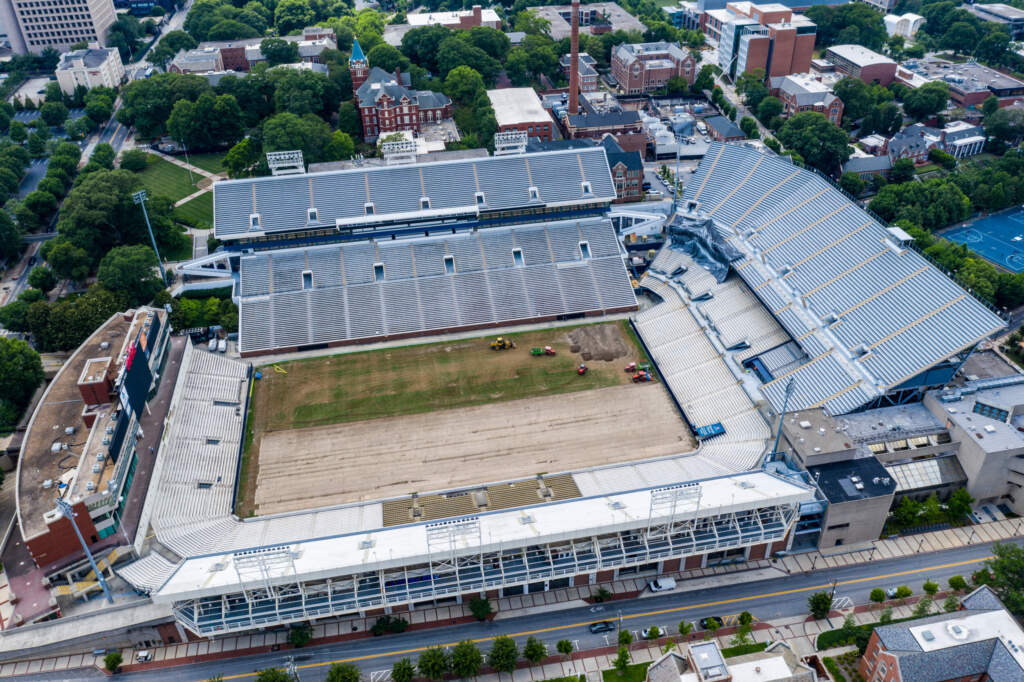 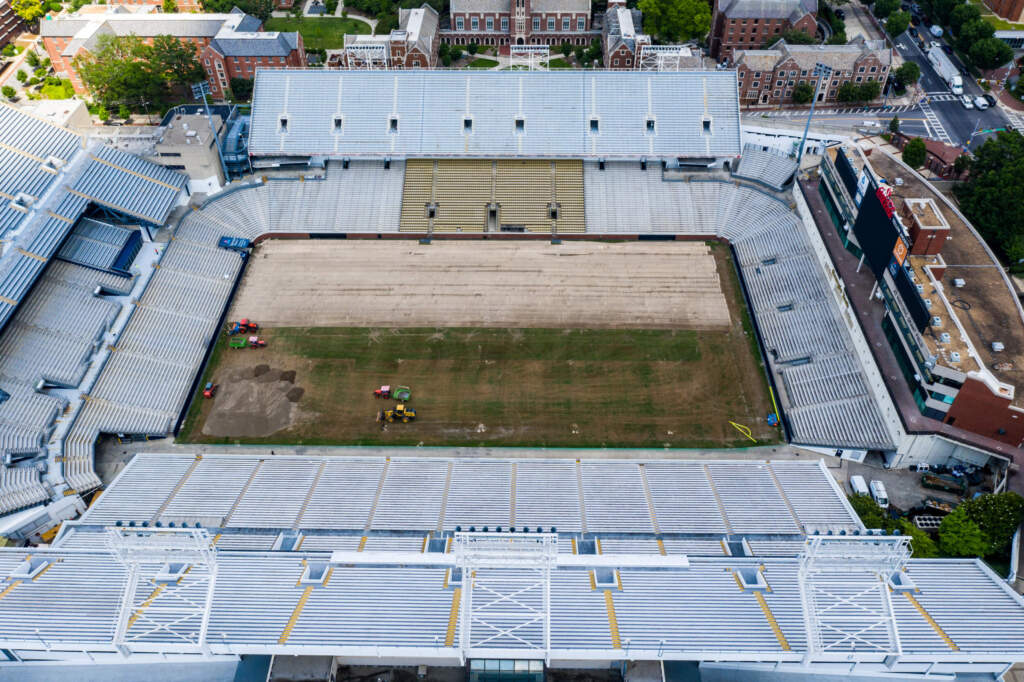 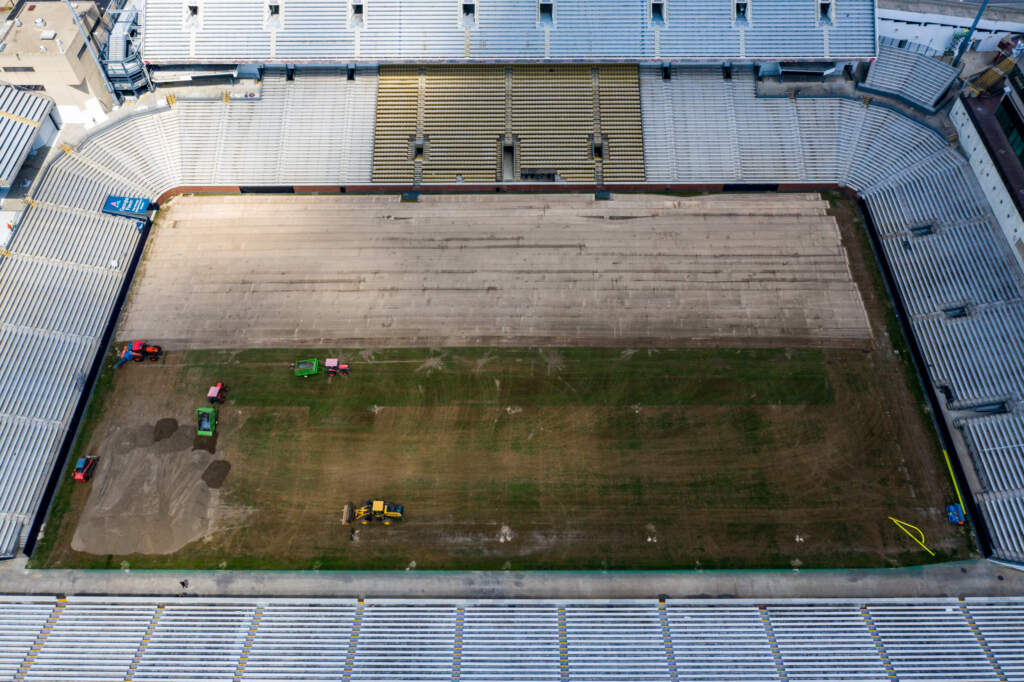 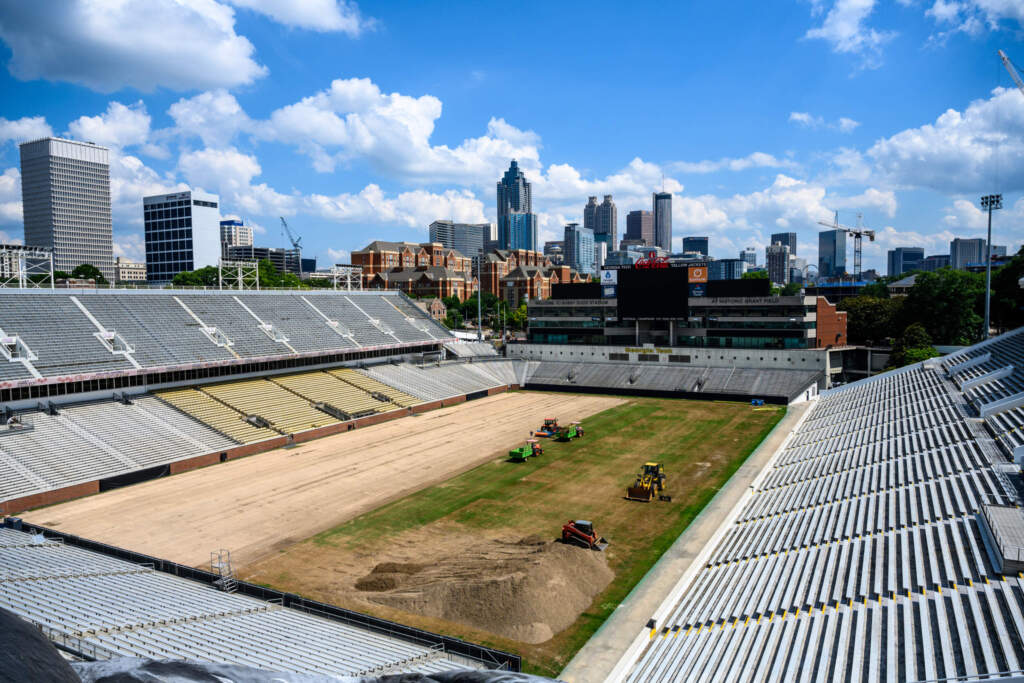 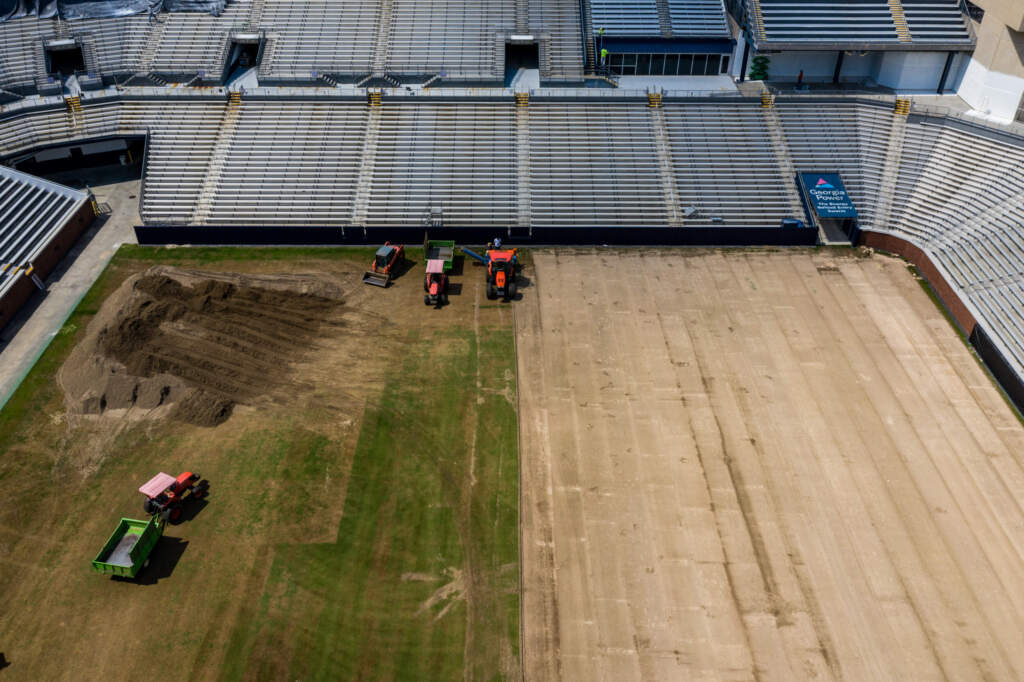 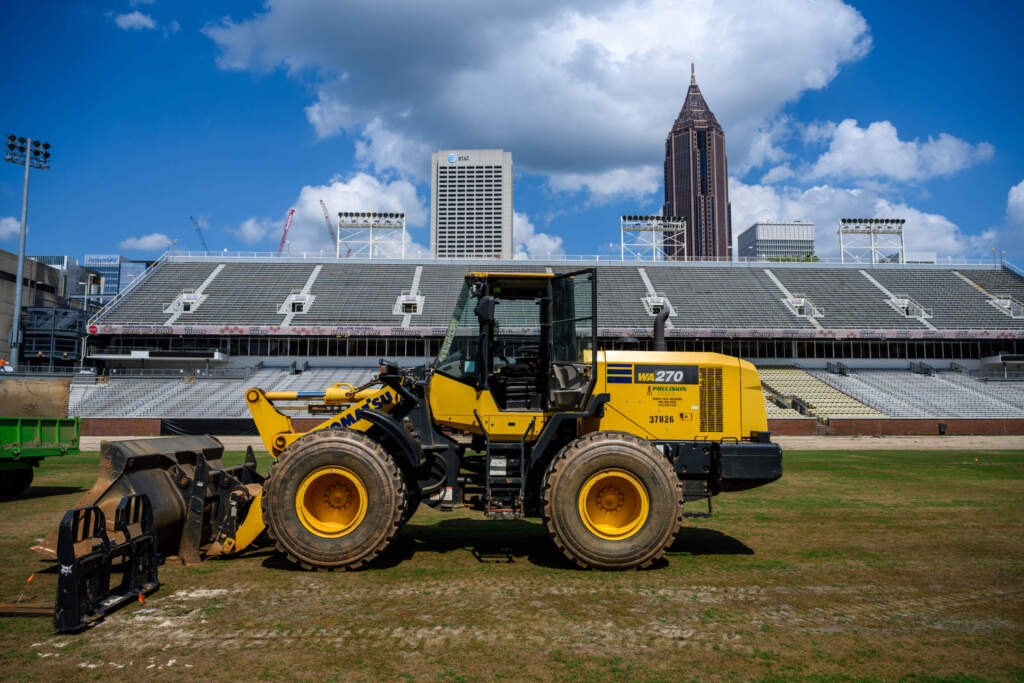 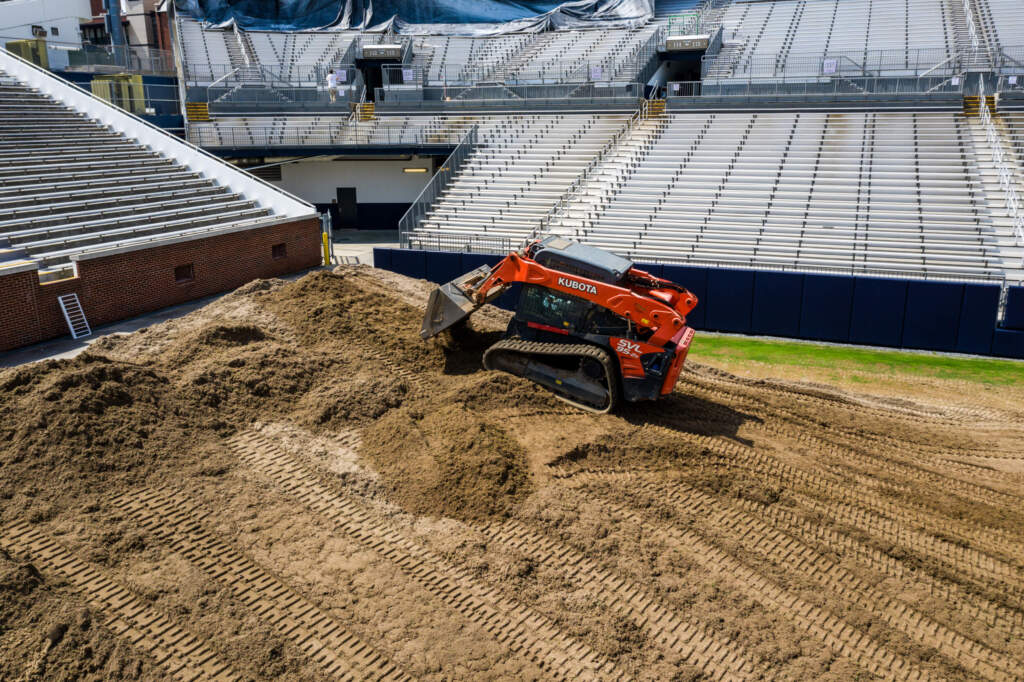 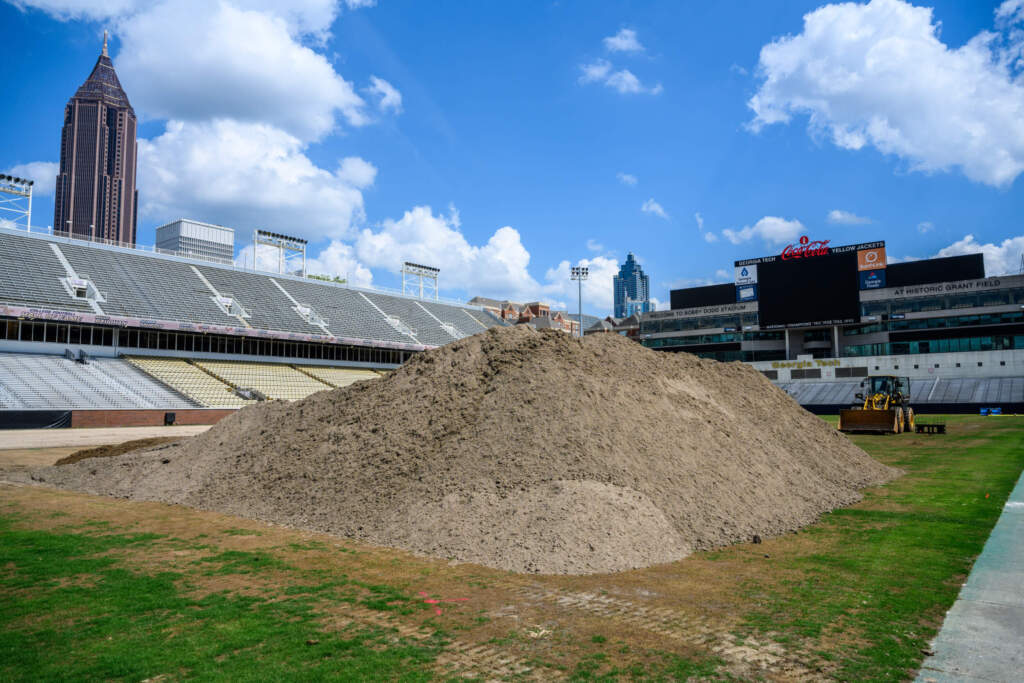 The new playing surface is one of several upgrades will be unveiled at Bobby Dodd Stadium when Georgia Tech football hosts Clemson in the Yellow Jackets’ highly anticipated, nationally televised season opener on Thursday, Sept. 3. Additional upgrades include a new fan- and energy-friendly LED lighting system, a new sound system, improved stadium signage, fresh paint throughout the facility and a refresh of restrooms throughout the stadium.