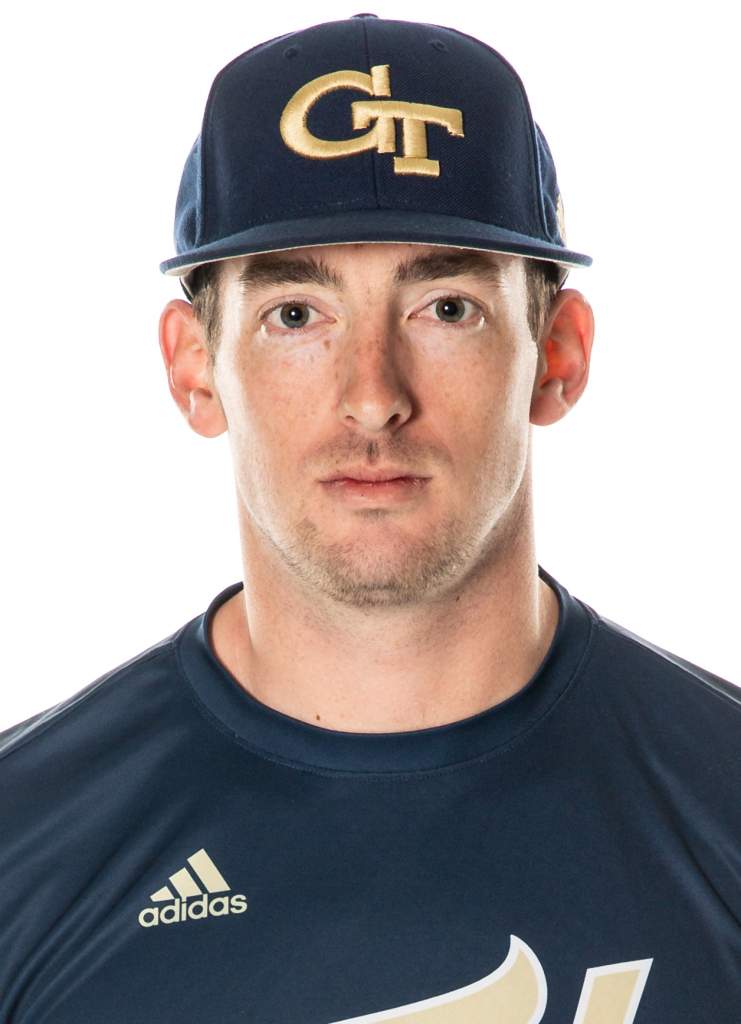 2018 (Junior): Had off-season surgery on his collarbone … Missed most of the month of March due to the injury … Made 12 appearances out of the Tech bullpen on the year … Posted a 1-1 record with a 3.94 ERA on the season … Totaled 16.0 innings on the mound … Struck out eight batters for the year … Held opponents to a .268 batting average on the season … Threw one inning of relief in the Jackets’ shutout of Arkansas-Pine Bluff (Feb. 27) … Earned the win in Tech’s extra-inning walk-off win over Radford (May 5), throwing 2.0-scoreless innings … Pitched a season-high 3.0 innings versus No. 15 Georgia at SunTrust Park (May 8) … Registered a season-high two strikeouts three times – versus No. 20 Georgia (April 25), against Radford (May 5) and against then-No. 15 Georgia (May 8) … Tallied a scoreless inning of work on the mound in relief versus Arkansas-Pine Bluff (Feb. 27), versus Georgia State (April 11), at Pittsburgh (April 14), at No. 8 North Carolina (April 22) and against No. 20 Georgia (April 25) … Also threw 1.2-scorless innings against Wake Forest (April 29).

2016 (Freshman): Appeared 21 times, making one start as a rookie for the Yellow Jackets … Was 2-0 with a 7.52 ERA in 26.1 innings on the season … Made his collegiate debut on Feb. 21 vs. VCU, allowing one hit in a scoreless inning … Struck out a season-high four batters in 2.0 scoreless innings at Georgia Southern on Feb. 24 … Earned his first career win on March 20 vs. Virginia Tech after striking out three batters in 2.0 scoreless innings … Posted his second win of the season on April 1 vs. Duke, pitching a scoreless frame … Made his first career start on April 19 vs. Mercer, allowing four runs on four hits and five walks in 2.1 innings … Made his postseason debut on May 25 vs. Miami at the ACC Championship Tournament, giving up one run on two hits in 1.0 inning … Pitched a scoreless inning of relief on June 5 at Florida at the NCAA Gainesville Regional.

Before Tech: Four-year letterwinner at Jefferson High School under head coach Tommy Knight … Led his team to a 28-8 record and the 2015 GHSA 8-AAA state title game his senior year, posting a 1.52 ERA with 78 strikeouts … Received first-team all-Rrgion 8-AAA honors and was named the 2015 Co-Baseball Player of the Year by Athens Banner-Herald … Was a starting cornerback on Jefferson’s 2012 state championship football team.

Personal: Full name is Justin Micah Carpenter, but goes by Micah … Born Aug. 2, 1996 in Hull, Ga. … Son of Jim and Lisa Carpenter … Has two siblings, MacLean and Mackenzie … Chose to attend Tech because of the great education, the baseball program and its proximity to home … Majoring in business administration.