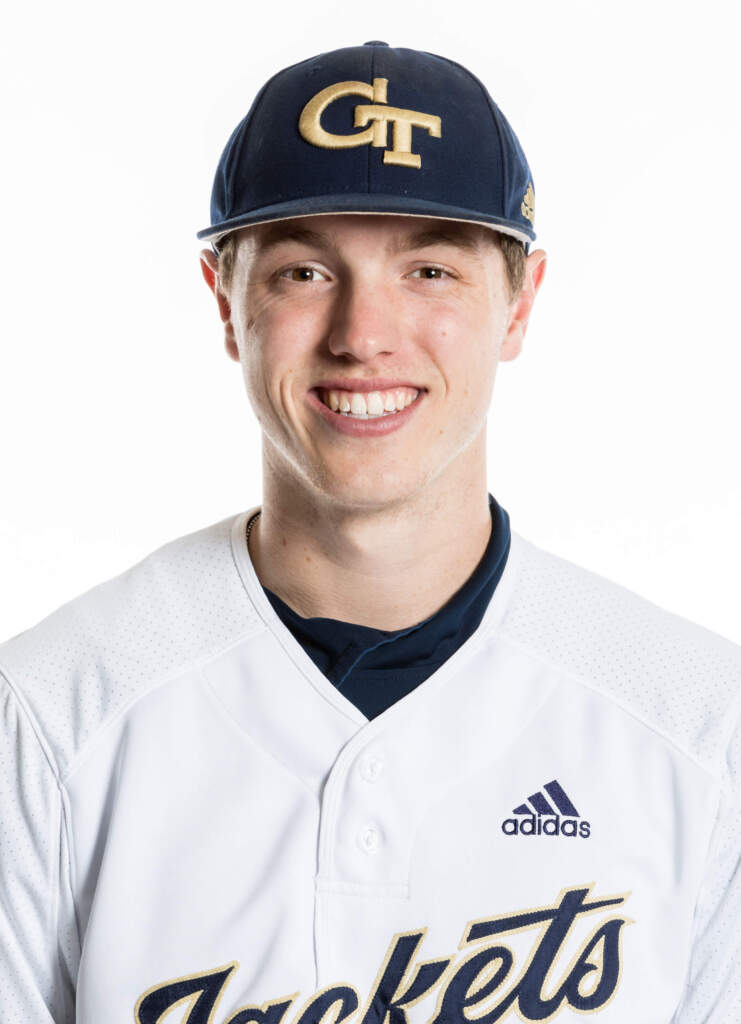 2019 (Sophomore): Limited by injury over the course of the season, made 12 appearances on the mound in relief … Finished 2-0 with a 4.15 ERA, 10 strikeouts, just two walks and six earned runs surrendered … Earned his first decision win over then-No. 4-ranked and eventual NCAA Regional team Georgia (April 23) in front of the largest college baseball crowd outside of Omaha in 2019 (18,861) … Struck out one and allowed just one hit in the 1.2 innings on 21 pitches to get the win … Pitched Tech to its seventh-straight ACC series win with 1.2 innings (one hit, two runs) against Clemson (April 27) … Allowed only two runs twice, making seven scoreless appearances on the season … Struck out a season-high three batters twice – Kennesaw State (March 6) and Western Carolina (May 5) … Made his final appearance of the year in the 14-1 win over Western Carolina (May 5).

2018 (Freshman): Appeared in 12 games on the mound for the Jackets, making three starts … Went 0-1 on the season with a 9.60 ERA … Struck out 14 batters over 15.0 innings of work … Made his collegiate debut with the start in game two of the doubleheader with Dartmouth (Feb. 24) … Pitched a scoreless inning in the Jackets’ shutout win over Illinois-Chicago (March 2) … Also had a scoreless inning versus Virginia Tech (March 17) and against No. 10 Duke (May 18) … Threw 2.0-scoreless innings versus Mercer (March 21) … Pitched a season-high 4.0-complete innings at Georgia State (March 7) … Also registered a season-high four strikeouts in the road start against the Panthers (March 7).

Before Tech: A two-sport standout athlete at Holy Innocents’ Episcopal School … Lettered for four years in baseball and was a senior captain for head coach DC Aiken … Also lettered for two years on the basketball team for Terry Kelly … Rated as high as No. 2 in the state of Georgia and No. 156 nationally among right-handed pitchers by Perfect Game … Also ranked as high as No. 41 overall in the state of Georgia for the class of 2017 by PG … A 2017 Rawlings-Perfect Game honorable mention all-American … Named to the 2017 southeast all-region second-team by Perfect Game … A 2016 Perfect Game underclassmen high honorable mention all-American his junior year … Named to the Georgia Dugout Preview Magazine Class A Private all-state first team his senior year … A two-time all-region honoree in 2017 and 2016 … Was awarded the Holy Innocents’ Episcopal School Cy Young Award in 2017 … Helped to lead his high school team to a 2017 regional championship title his senior year .. Threw two no-hitters over his senior season … Also combined to record a perfect game with his brother when he was a sophomore in 2015 … A member of the 6-4-3 Cougars summer league team … Helped lead 6-4-3 to a record of 68-4 during the 2016 summer baseball season … Was part of five championships with the 6-4-3 Cougars, winning the 2016 17U PG Super25 National Championship, the 2015 15U Super25, the 2016 18U PG Evoshield Classic, the 2016 17U PG Evoshield Classic and the 2016 17U Perfect Game-East Cobb Invitational … Was named to a number of all-tournament teams with the Cougars, most notably the 2016 17U Perfect Game-East Cobb Invitational all-tournament team, the 2016 17U WWBA Qualifier all-tournament team, the 2016 17U PG Evoshield Classic all-tournament team, the 2015 16U Perfect Game World Series all-tournament team and the 2015 16U WWBA National Championship all-tournament team … A member of the National Honor Society, the French Honor Society, the History Honor Society and the Math Honor Society … Was also a member of the Dean’s List from 2014-17 … Served as the FCA President his senior year.

Personal: Has an older brother … Uncle, Norman Chapman, played golf at Clemson and on the amateur tour … Cousin, Thomas Young, played basketball at The Citadel … Enjoys spending time on the lake, playing golf and basketball, hanging out with friends and listening to music … Chose Tech because it was a dream to come to a school like GT and play in the ACC, the opportunity to get an incredible degree and its proximity to his home … Plans to major in business administration.