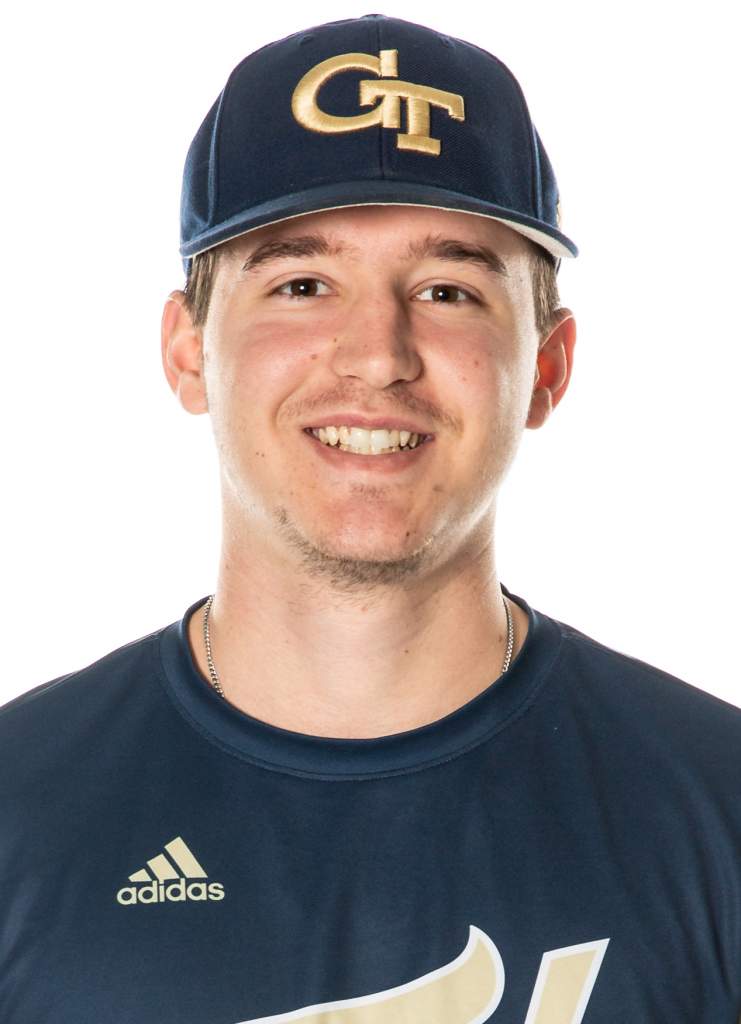 2018 (Sophomore): Named to the all-ACC first team … Tabbed the NCBWA National Pitcher of the Week for the month of April … A two-time ACC Pitcher of the Week (April 9 and May 14) … Named a Collegiate Baseball National Player of the Week on April 30 … Also tabbed Perfect Game/Rawlings College Pitcher of the Week on May 1 … Pitched in 16 games on the season for the Jackets, making 15 starts … Went 7-4 overall with one save on the year … Struck out a team-high 106 batters over a team-high 97.0 innings, which both ranked fifth in the ACC on the year … Walked just 10 batters all season long … Threw a team and ACC-high three complete games on the season – versus No. 6 Florida State (April 7), against Wake Forest (April 28) and at Virginia (May 12) … Held opponents to a .241 batting average on the season … Totaled eight quality starts on the year … Struck out 10 batters or more twice, including an ACC and career-high 17 batters versus Wake Forest (April 27) … Led the ACC in fewest walks allowed per nine innings (0.93) and in strikeout-to-walk ratio (10.60) on the year … Earned his first career save with 4.0-scoreless innings in the season-opening win over Minnesota (Feb. 16) … Allowed just one run on four hits, one walk and six strikeouts over 7.0 innings to earn the win on the road at Georgia Southern (Feb. 20) … Held Arkansas-Pine Bluff (Feb. 27) to just one hit over 5.0-complete innings, while striking out six to pick up the win … Went 7.1 innings to record the win versus Miami (March 31), surrendering four runs on four hits and one walk, while striking out 10 batters … Allowed just one run on six hits, while striking out  nine in a complete-game win over No. 6 Florida State (April 7) … Went the distance in a complete-game win over Wake Forest (April 28), striking out 17 batters and holding the Deacons to just one run on four hits for the game … Earned the complete-game win at Virginia (May 12), allowing one unearned run on six hits, while striking out seven over 9.0 innings … Pitched 5.0-complete innings, surrendering four runs, three earned, on seven hits and one walk in the blowout win over No. 10 Duke (May 18) to clinch the series win … Threw 6.2 innings at No. 8 North Carolina (April 21), giving up just one earned run on six hits and eight strikeouts, but did not factor in the decision … Also recorded a quality start with 6.0 innings versus Radford (May 5), but did not factor in the decision … Also went 7.0 innings, allowing only three earned runs on seven hits and nine strikeouts in a road loss at No. 6 Clemson (March 10) … Suffered the loss at Pittsburgh (April 14), despite giving up just two runs on six hits and nine strikeouts over 7.1 innings.

2017 (Freshman): Made six appearances on the mound, making one start … Went 0-1 on the season … Totaled 10.1 innings of work … Struck out five batters … Made his collegiate debut out of the bullpen versus Georgia at SunTrust Park (May 9) … Made his first career start in the regular season finale versus No. 8 Virginia (May 20) … Threw 2.0 innings versus Georgia (May 9) … Also came out of the bullpen to pitch an inning at Duke (May 13) and 2.0 innings in the home win over Georgia Southern (May 16) … Pitched 0.1 innings of relief in the Jackets’ 14-7 win in the series-opener versus No. 8 Virginia (May 18) … Went 3.0-plus innings in his first career start versus the No. 8 Cavaliers (May 20) … Also came out of the bullpen for 2.0-plus innings of work against No. 12 Wake Forest (May 25) at the 2017 ACC Baseball Championship.

Before Tech: A three-year letterwinner at Tift County High School under head coach Kyle Kirk … Was a team captain his senior year … A 2016 Rawlings-Perfect Game honorable mention all-American … Also a 2016 Perfect Game southeast all-region second team selection … Was also recognized as a 2015 PG underclass honorable mention all-American … Ranked No. 9 in the state of Georgia and No. 64 nationally by Perfect Game among all left handed pitchers in the 2016 signing class … Named to the all-state team in 2016 as a senior … Was a two-time all-region first team selection in 2015 and 2016 … Tabbed the Region Pitcher of the Year in 2015 … Helped lead his team to the regional championship title in 2015 as a junior … Also played for Team Elite from 2014-16 … A four-year member of the honor roll.

Personal: Full name is Sidney Connor Thomas, but he goes by Connor … Born on May 29, 1998 in Tifton, Ga. … Son of Calvin and Tammie Thomas … Enjoys playing golf and the guitar … Started playing baseball at the age of five … An active member of Fellowship of Christian Athletes … Chose Tech because of the education and the baseball team … Intends to major in business administration.