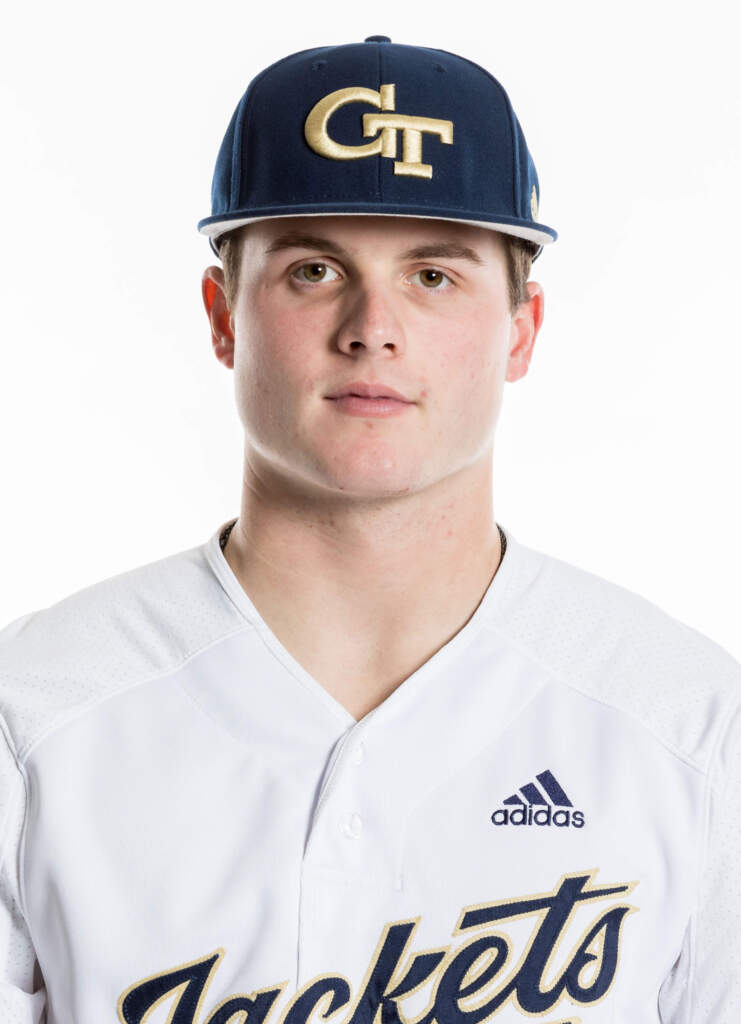 MLB Draft: Drafted in the 39th round by the Colorado Rockies (1166th overall) in 2017 but chose to attend Tech.

2019 (Sophomore): One of only three Jackets to appear and start in all 62 games, joining Nick Wilhite and Kyle McCann … Started the first 16 games of the season in right field before moving to left field for the remaining 46 … One of six Jackets to hit over .300 on the season, finishing at .307 … Second on the team in doubles (18) and tied for third on the team in hits (74) with Tristin English … Finished with 22 multi-hit games on the season – good for third on the team … Recorded 12 multi-RBI games – good for third on the team … Doubled up his freshman total of home runs with four on the year … Made a diving catch into the right-field wall in the bottom of the 10th to record the final out and secure the 5-4 win over eventual Starkville Regional participant Miami (Fla.) (March 8) … Helped ignite Tech’s rally back from a 7-2 deficit in the Atlanta Regional to Coastal Carolina, hitting an RBI single in the seventh inning and solo home run in the ninth to win 10-8 … Had a career-high four hits three times … Went 4-for-4 with an RBI and a double while scoring four runs at eventual Athens Regional participant Mercer (March 19) … Went 4-for-4 against Western Carolina (May 4) for a career-high five RBI … Hit 4-for-4 with a double and run at home against Pitt (May 16) … Finished 2-for-2 with a career-high two doubles in the 11-inning win over eventual Morgantown Regional host West Virginia (Feb. 16) … Hit 3-for-5 for two doubles and three RBI against then-No. 9-ranked and eventual Chapel Hill Regional host North Carolina (April 6) … Recorded 11 hits and six RBI over eight postseason games … Had a double in each of the first three games of the ACC Tournament – Notre Dame (May 22), Duke (May 24), NC State (May 25).

2018 (Freshman): Played in 56 games, making 51 starts in the outfield for the Yellow Jackets as a true freshman … Hit .283 with two home runs, a triple, nine doubles, 24 RBIs and 21 runs scored … Posted a .375 slugging percentage and a .357 on-base percentage on the season … Recorded a team-high five outfield assists on the year … Totaled 15 multi-hit games and five multi-RBI games on the season … Posted a season-high eight-game hitting streak on the year … Closed out the season reaching base safely in 20-straight games … Made his Yellow Jacket debut off the bench in the season-opening win over Minnesota (Feb. 16) … Made his first start the next day versus Bradley (Feb. 17) … Picked up his first career hit in the road win at Georgia Southern (Feb. 20) … Registered a season-high three base hits twice – in the road win at No. 6 NC State (March 23) and in the home victory over Wake Forest (April 27) … Scored a season-high three runs and drove in a season-high three RBIs in the 20-5 home win over No. 10 Duke (May 18) … Went 1-for-2 with a triple, walk and RBI in the road win at Georgia Southern (Feb. 20) … Was 2-for-3 with a double, a walk and two RBIs in game one of the doubleheader sweep of Dartmouth (Feb. 24) … Went a combined 2-for-4 with two RBIs in two games versus UIC (March 3-4) … Was 1-for-2 with an RBI in the road win at Georgia State (March 7) … Was a combined 4-for-9 with a run scored in the three-game ACC series at No. 6 Clemson (March 10-11) … Went 1-for-3 with a walk, an RBI and a run scored in the loss at No. 13 Auburn (March 20) … Had six hits, three RBIs and two runs scored in three road games at No. 6 NC State (March 23-25) … Was key in the Jackets’ sweep of Miami (April 1) going 2-for-4 with a double and a run scored in the series finale … Went 1-for-2 with a double, RBI and a run scored in the Sunday win over No. 6 Florida State (April 8) … Scored two runs and had two hits in the double-digit win at home over Kennesaw State (April 18) … Over a four-game stretch at No. 8 North Carolina (April 22), versus No. 20 Georgia and two games at home against Wake Forest (April 27-28), he went 8-for-15 with a home run, two doubles, four RBIs and three runs scored … Went 4-for-12 with two walks and two runs scored in the series sweep over Radford (April 4-6) … Had an RBI and a single in the Jackets’ loss to No. 15 Georgia at SunTrust Park … Closed out the regular season going 4-for-12 with a home run, a double, a walk, three RBIs and five runs scored in the series win over No. 10 Duke (May 17-19) … Recorded a single in both ACC Championship pool play games versus Pittsburgh (May 22) and against North Carolina (May 25).

Before Tech: Drafted in the 2017 MLB First-Year Player Draft in the 39th round by the Colorado Rockies … Lettered for four years in baseball at Wesleyan School under head coach Brian Krehmeyer … Was a two-year team captain … Ranked as high as No. 10 in the outfield and No. 22 overall by Perfect Game for the class of 2017 in the state of Georgia … Also ranked as high as No. 46 in the outfield and No. 199 overall nationally by Perfect Game for the class of 2017 … Recognized as a 2017 Rawlings-Perfect Game honorable mention all-American … Also named to the southeast all-region first team by PG in 2017 … Named a 2016 Perfect Game underclassmen first team all-American as a junior and a 2015 Perfect Game underclassmen high honorable mention selection as a sophomore … A two-time Georgia Dugout Class A Private first team all-state selection … Two-time Gwinnett Daily Post all-county first team honoree … Ranks first all-time in Wesleyan School history in doubles and second all-time in total hits … Helped to lead his Wesleyan School team to the state championship title in 2015 … Participated in both the 2016 National Showcase and the 2015 National Junior Showcase events where he was ranked in the top-10 in outfielder throwing velocity and time to impact … Earned a PG Grade 10 overall … Played for the East Cobb Yankees … Named the tournament MVP at the 2015 16U BCS Finals … Also earned all-tournament team accolades at the 2015 WWBA SE Qualifier 2, the 2015 16U Perfect Game World Series, the 2015 16U WWBA National Championship, the 2015 16U BCS Finals and the 2014 16U Perfect Game-East Cobb Invitational … A member of Fellowship of Christian Athletes (FCA).

Personal: Son of Danny and Kara Hall … Older brother Carter was also on the Georgia Tech baseball team and is now a graduate of Georgia Tech (2019) … Father, Danny, is the head coach for the Georgia Tech baseball team … Also enjoys playing soccer, basketball and football … A Tech fan all of his life, he chose Tech for the chance to receive an outstanding education and the opportunity to develop more as a player … Intends to major in business administration.