THE FLATS – Freshman Mahak Jain clinched the deciding match for No. 12 Georgia Tech women’s tennis on Saturday afternoon as the Yellow Jackets opened the ITA Kickoff Weekend with a 4-3 win over No. 14 South Carolina. All eyes turned to court six where the freshman battled to a three-set win, pushing Tech to 2-0 on the season.

DOUBLES ACTION – Wins on courts one and two put the Yellow Jackets up 1-0 following doubles play. Gia Cohen and Carol Lee gave Tech the edge in doubles, wrapping up first on court two. The pair won an early break to take a 2-0 lead and never looked back, securing a 6-3 win over Allie Gretkowski and Emma Shelton. Tech’s No. 5 doubles tandem of Kenya Jones and Victoria Flores clinched the doubles point on court one. On serve at 3-2 with No. 29 Mia Horvit and Megan Davies, the Jackets pushed their lead out to 5-3 and Jones served out the win, 6-3. Court three action between Ava Hrastar and Ruth Marsh and Silvia Chinellato and Ana Cruz stood knotted at 3-3 when the point was clinched. 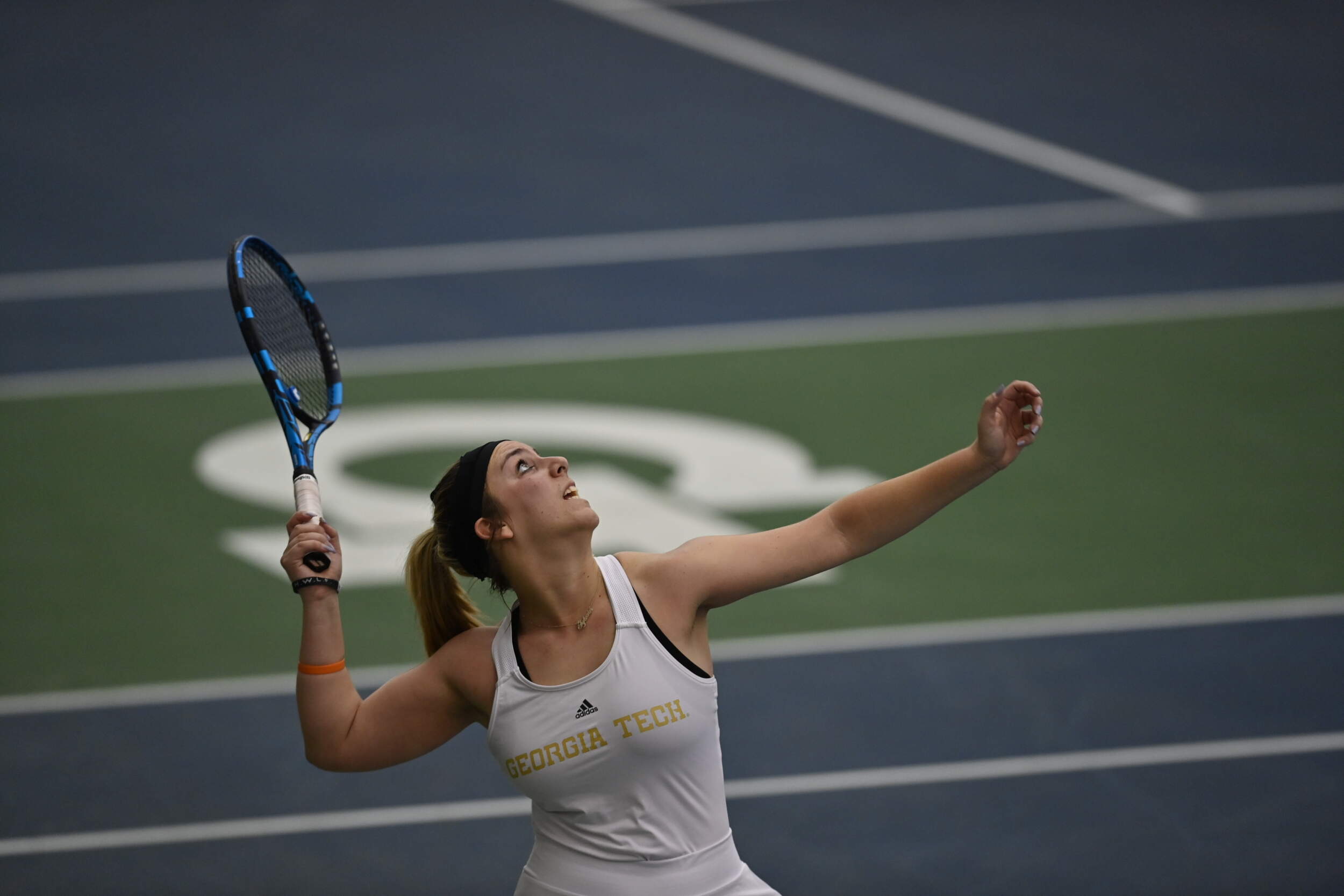 SINGLES ACTION – No. 13 Jones pushed Tech’s lead to 2-0 with a quick straight-set win on court one. Opening with a 4-2 lead over No. 34 Horvit, Jones pocketed the first set, 6-2, and won three consecutive games in the second set after narrowly trailing, 4-3, to capture the match. South Carolina would even the match at 2-all taking the next two singles matches to finish. The Gamecocks picked up their first win from court five as Chinellato edged out Tech’s Lee, 6-2, 6-4, and knotted the match with a 7-5, 7-5 win on court four from Gretowski. 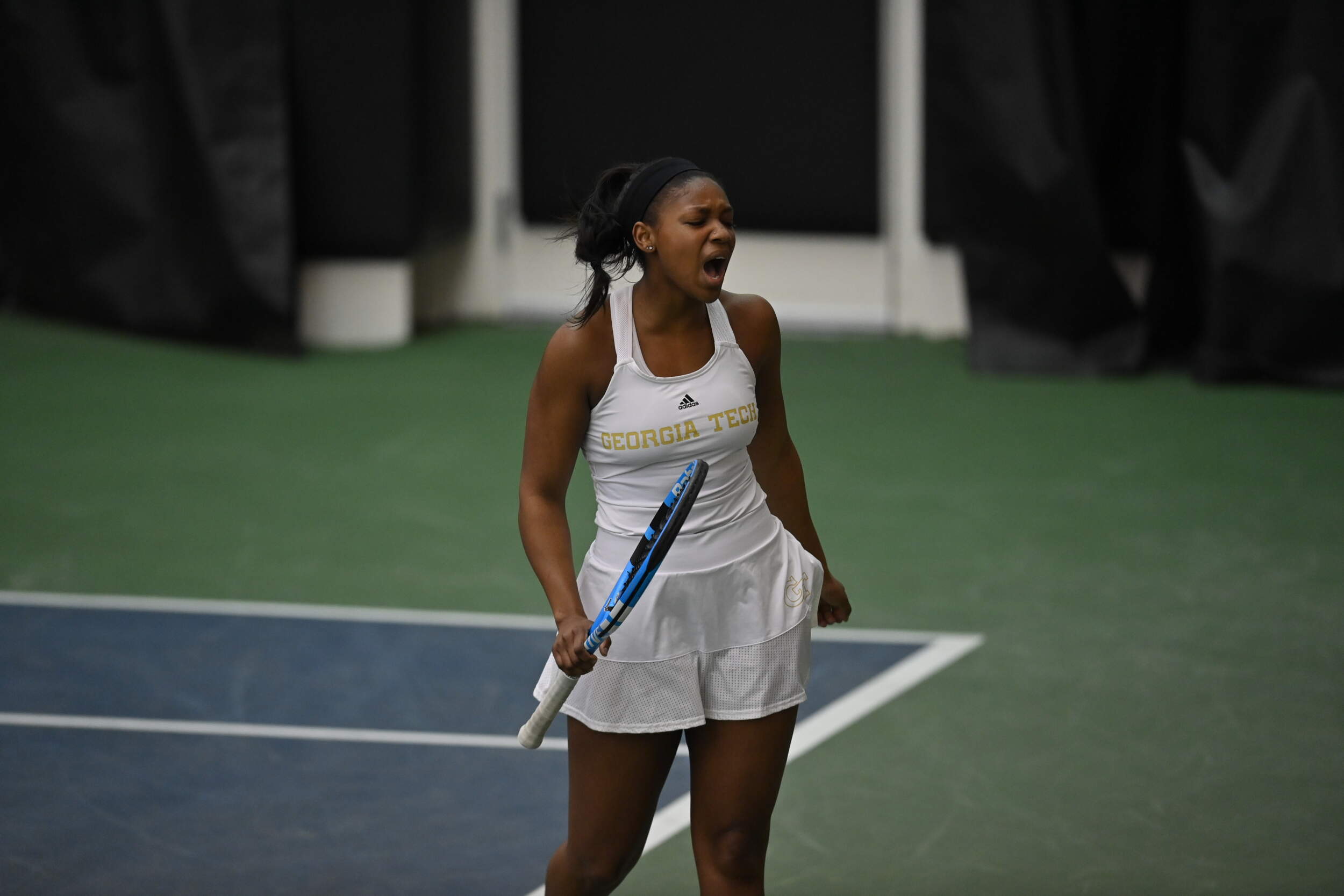 The Jackets and Gamecocks traded the next two points to bring the match down to the final court. Competing on court three, No. 56 Flores returned the lead to Tech, pulling out a three-set win over No. 93 Shelton. The lead was short-lived as South Carolina took court two despite a hard-fought effort from Hrastar. Davies took the first set over Hrastar, 6-3, but the freshman Jacket forced a deciding third set with a 7-5 second set win. Hrastar came out with a 3-0 lead in the final set, but Davies rallied back to win the set, 6-3, and even the match at 3-3. 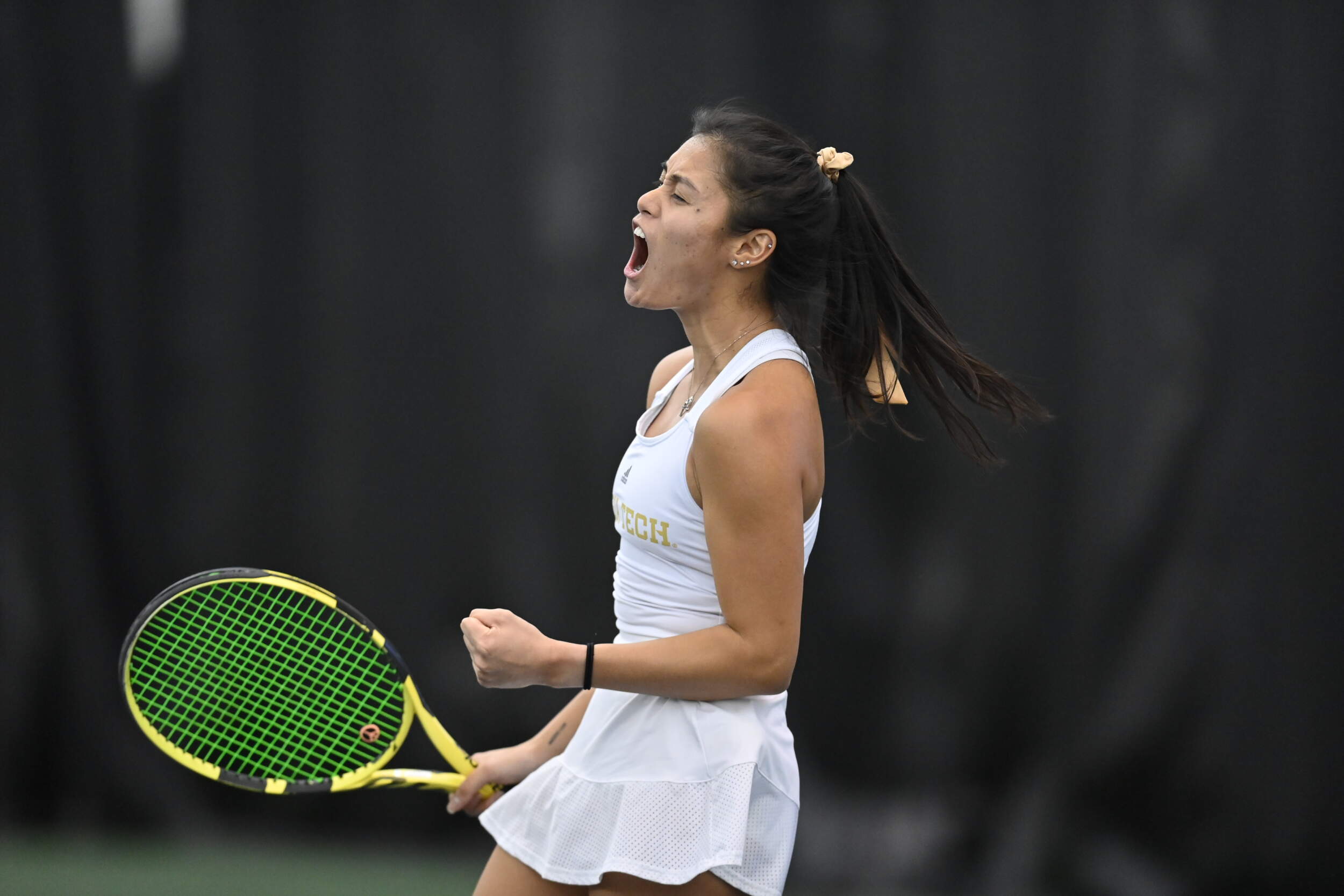 All eyes turned to court six where Jain faced Cruz in a three-set battle. The Gamecock took a set lead over Jain, rolling to a 6-1 opening set, but the Jacket rallied back to take the second set, 6-3. The freshman Jacket opened the final set with a 5-1 advantage, but Cruz fought off several match points to knot the set at 5-all. Jain went up a break winning the next game and served out the match for a 7-5 third set win, clinching the match for Georgia Tech. 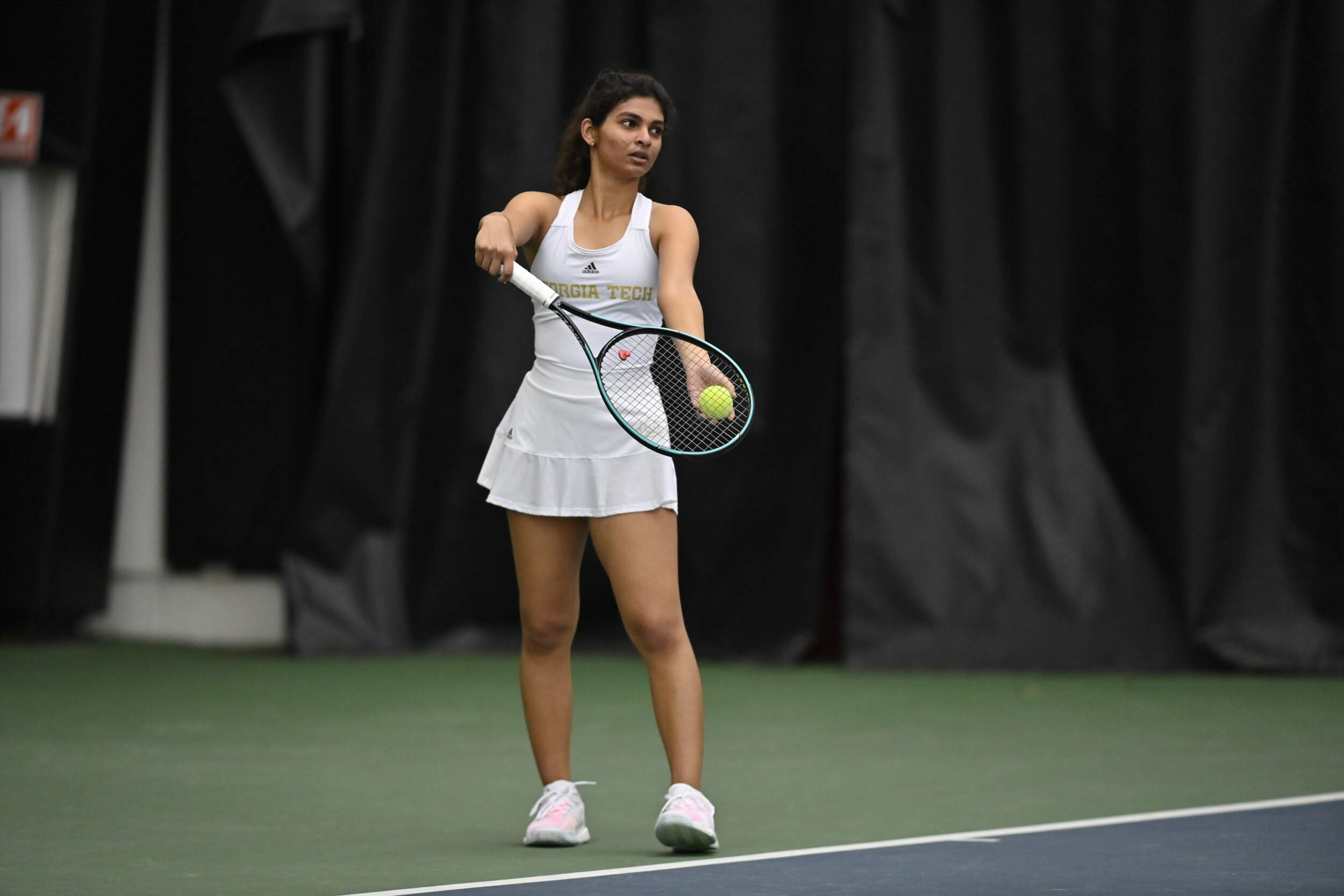 “It was a very exciting match,” said head coach Rodney Harmon. “South Carolina has a very good team and every time we play them, it’s always a tough match. Today was no different, coming down to the last match. Mahak [Jain] came up really huge for us today with a great win. I was also very proud of Victoria [Flores] and Kenya [Jones] in singles and our doubles play. We’ll have another tough match tomorrow and we’re looking forward to the opportunity to play.” 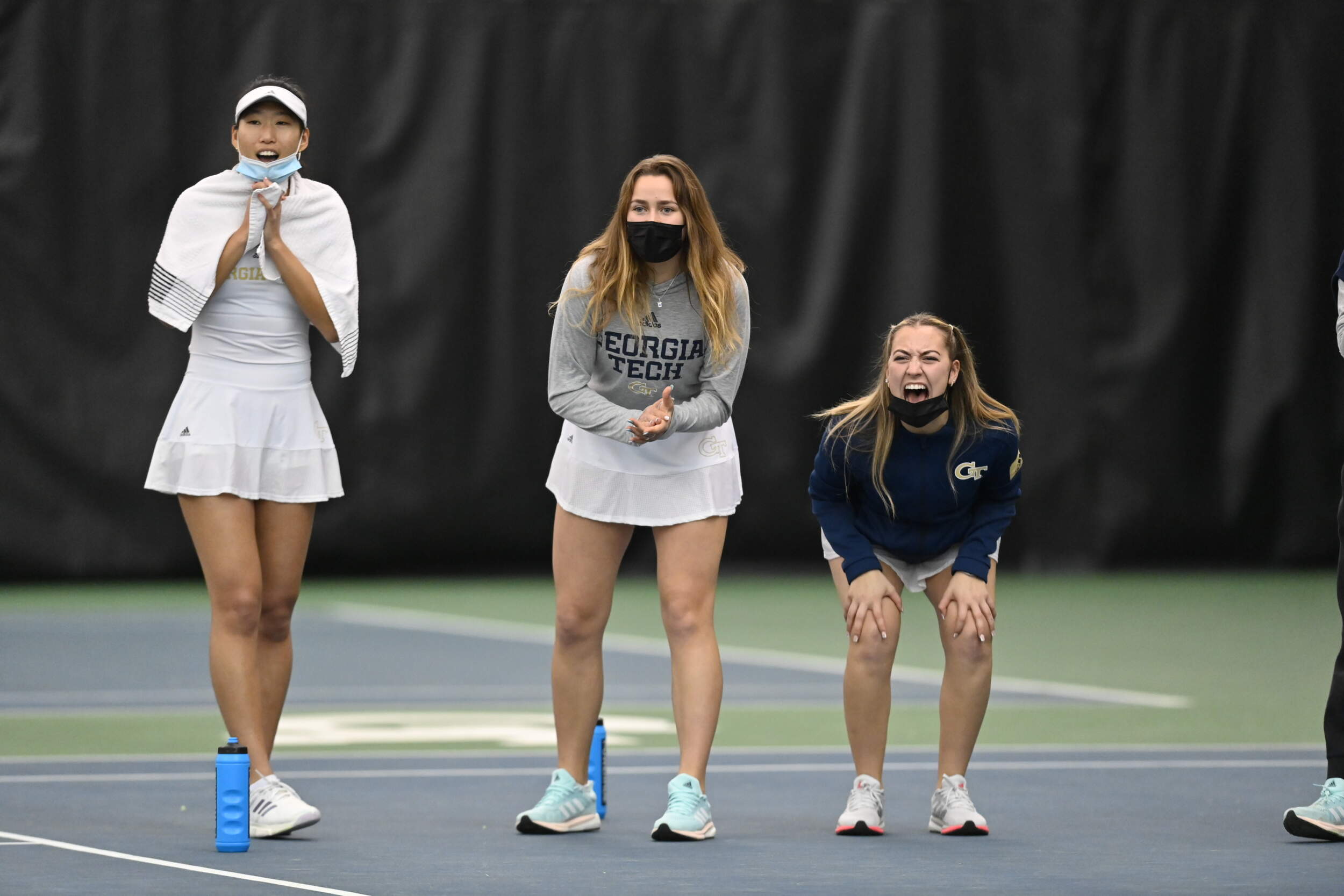