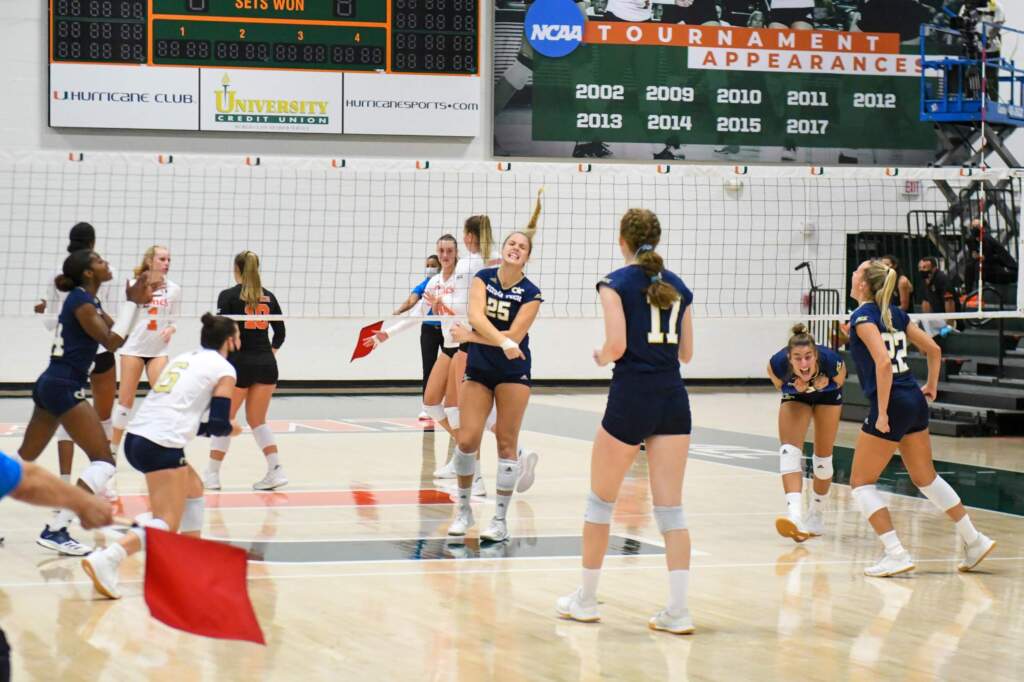 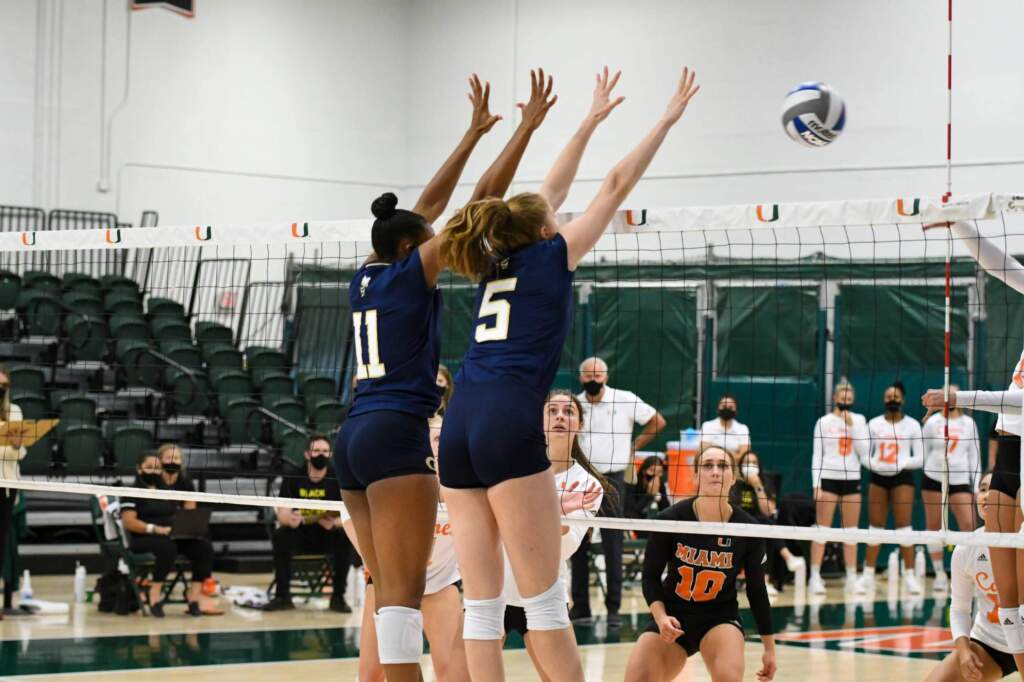 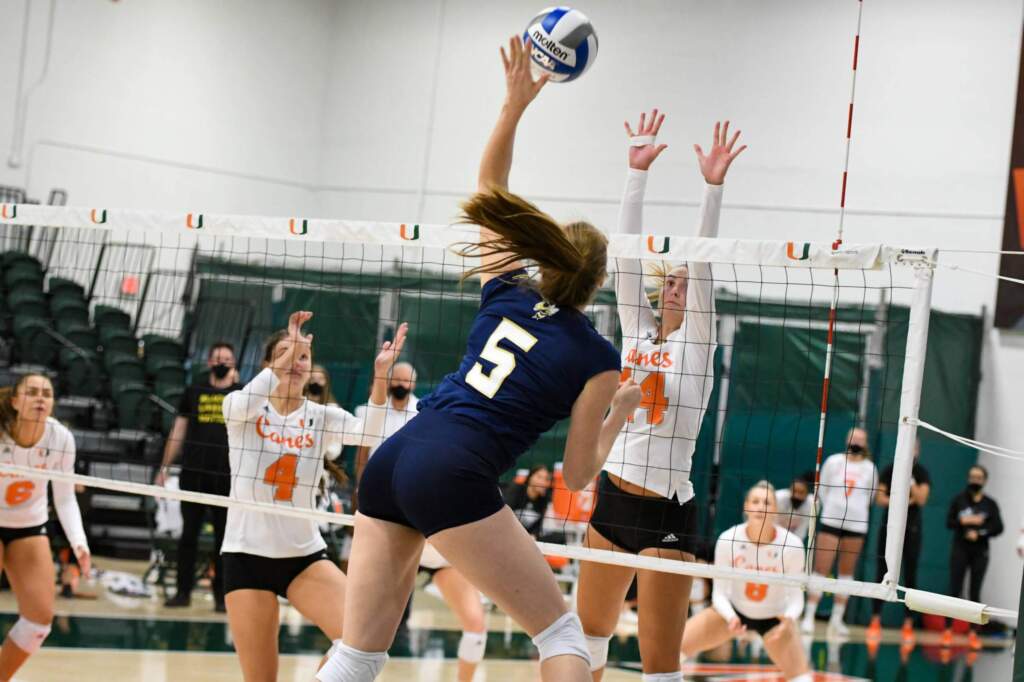 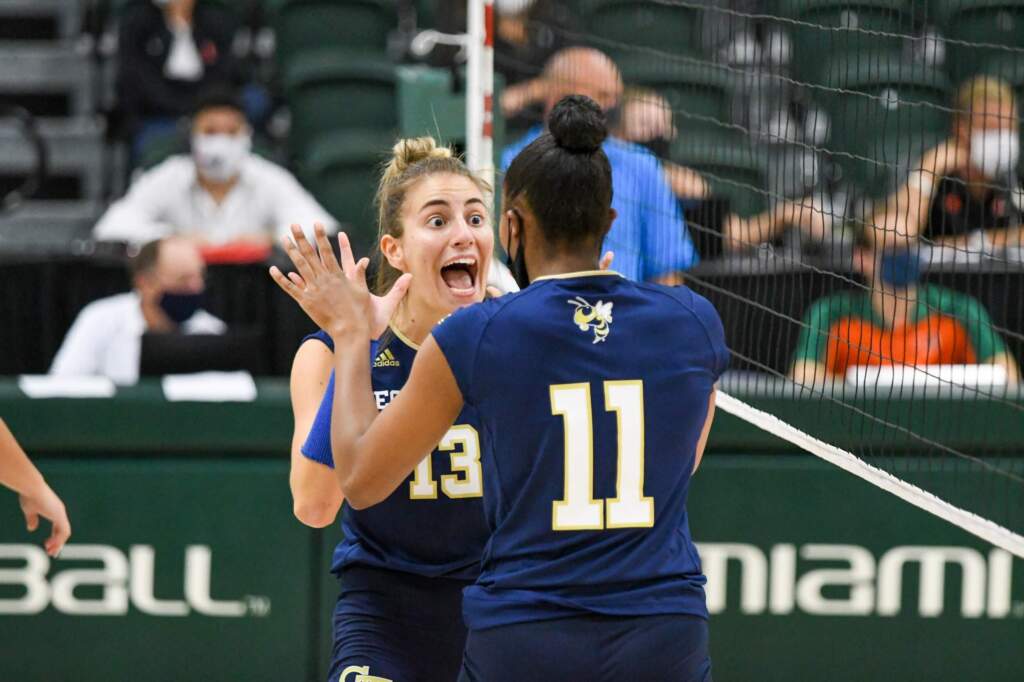 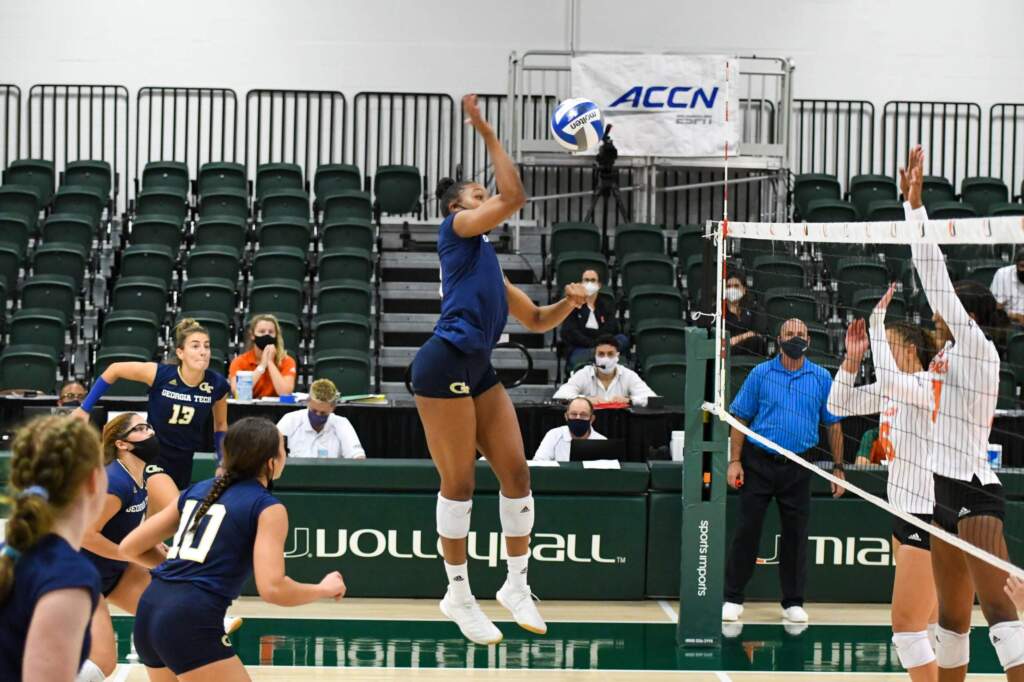 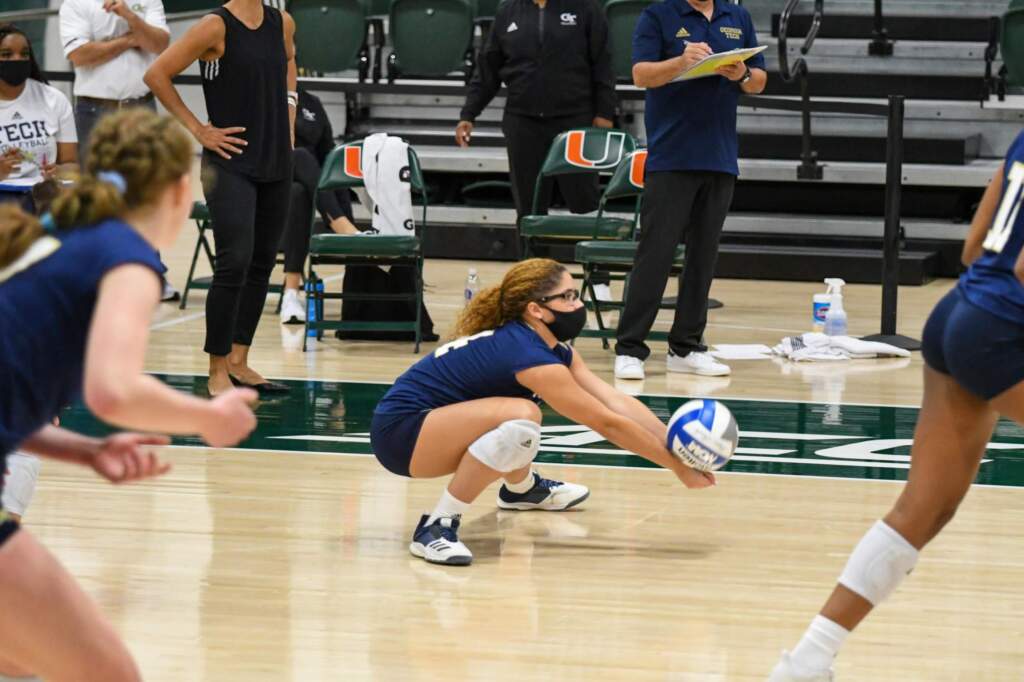 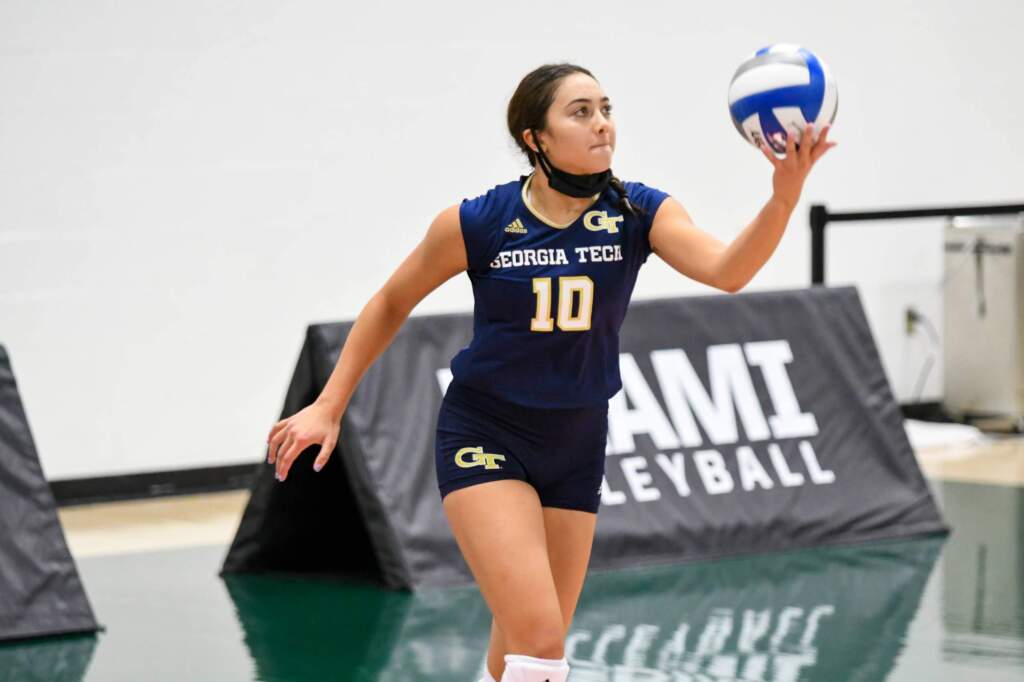 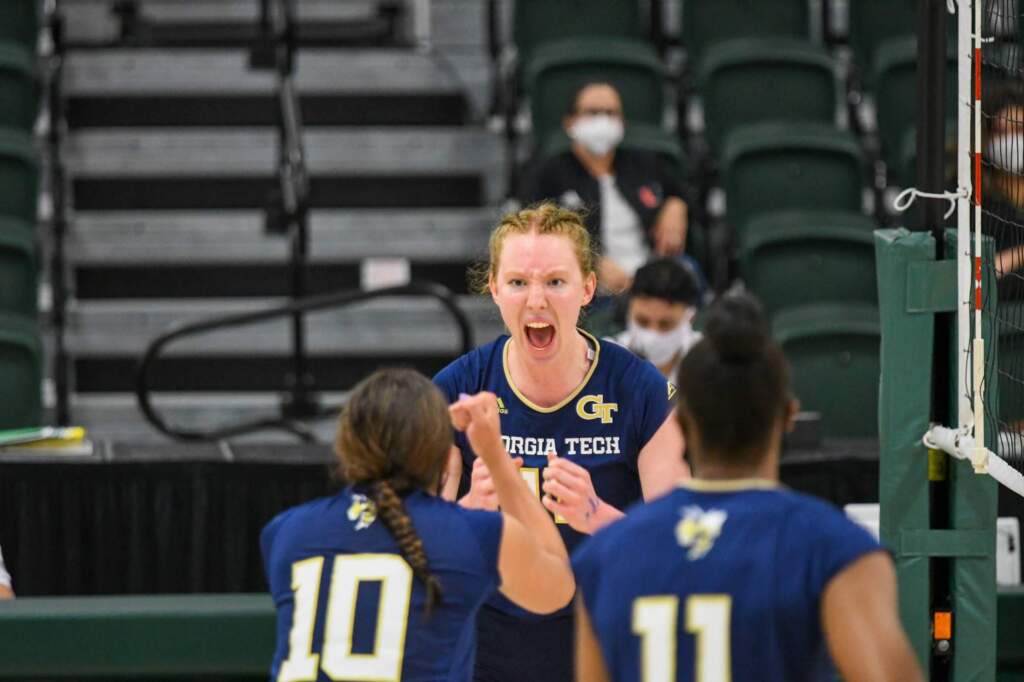 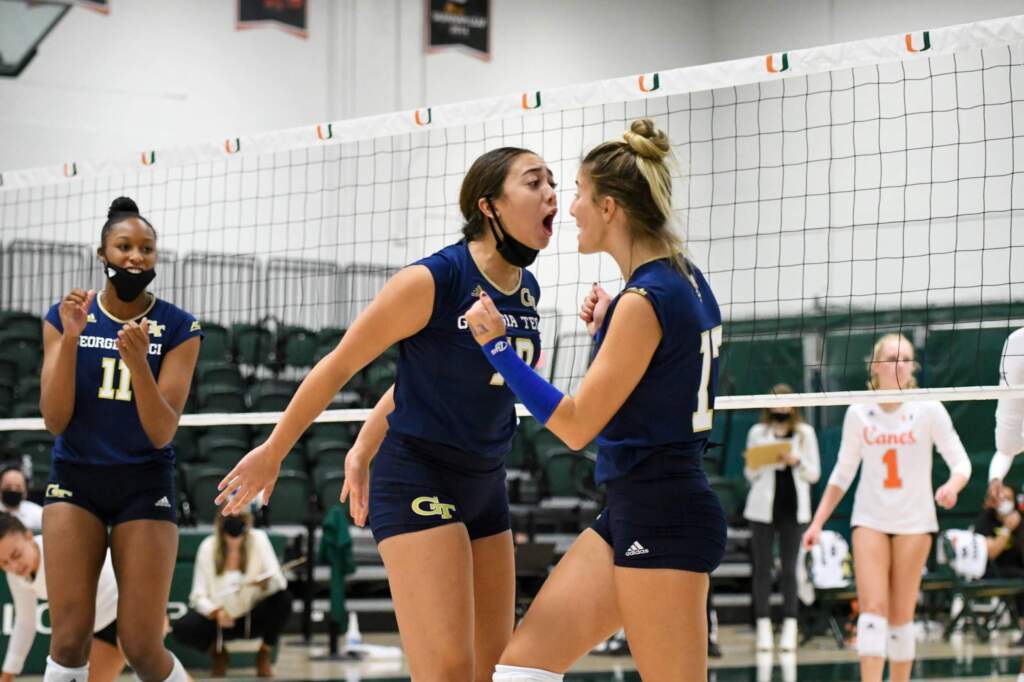 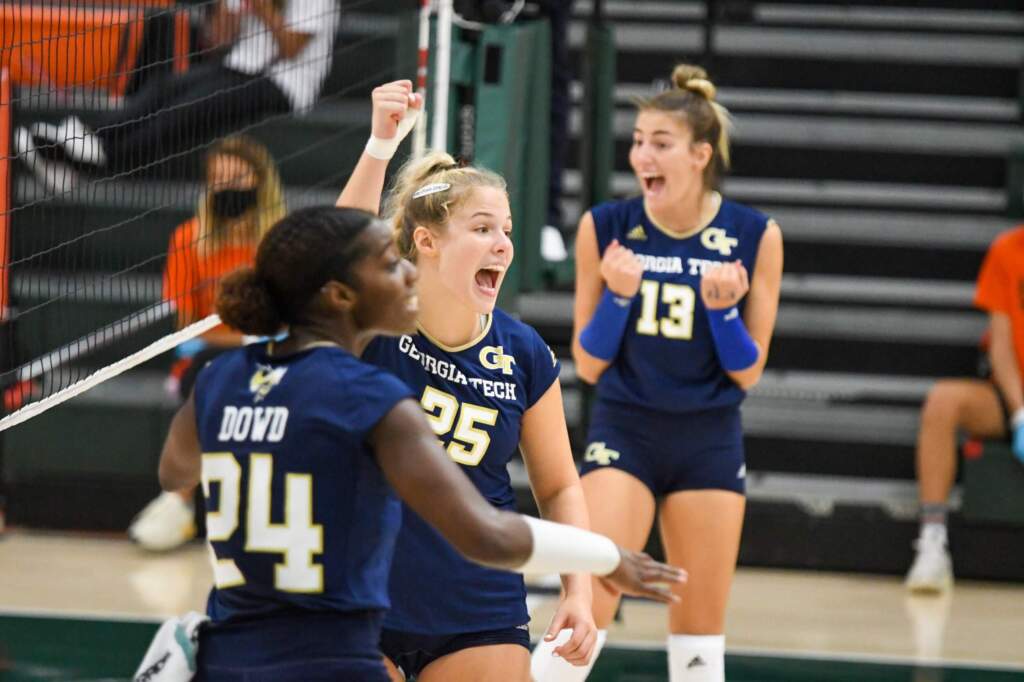 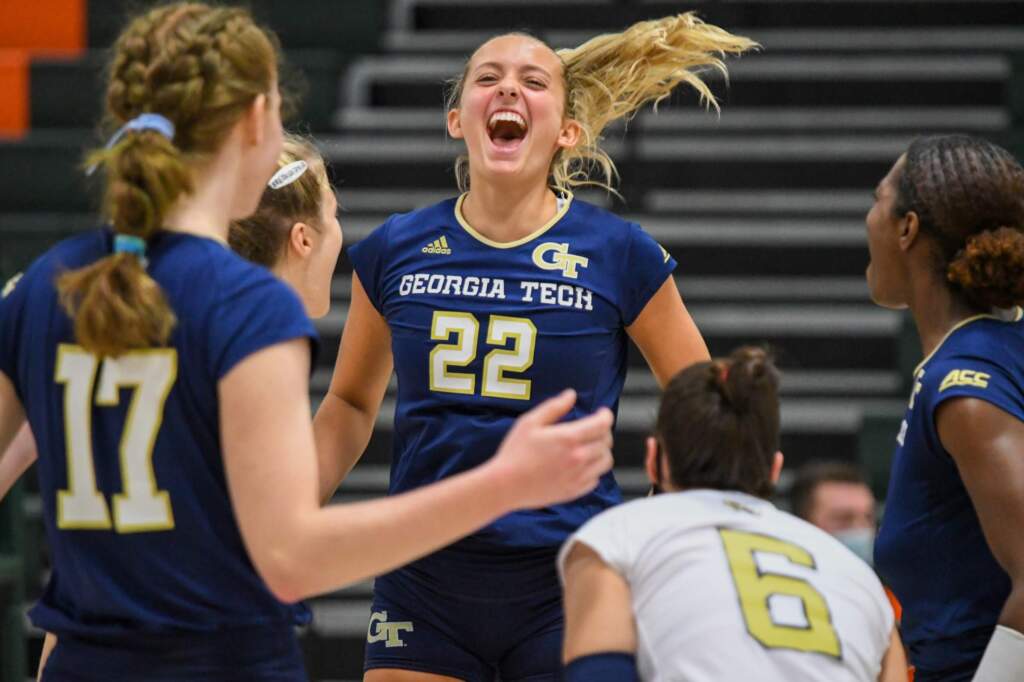 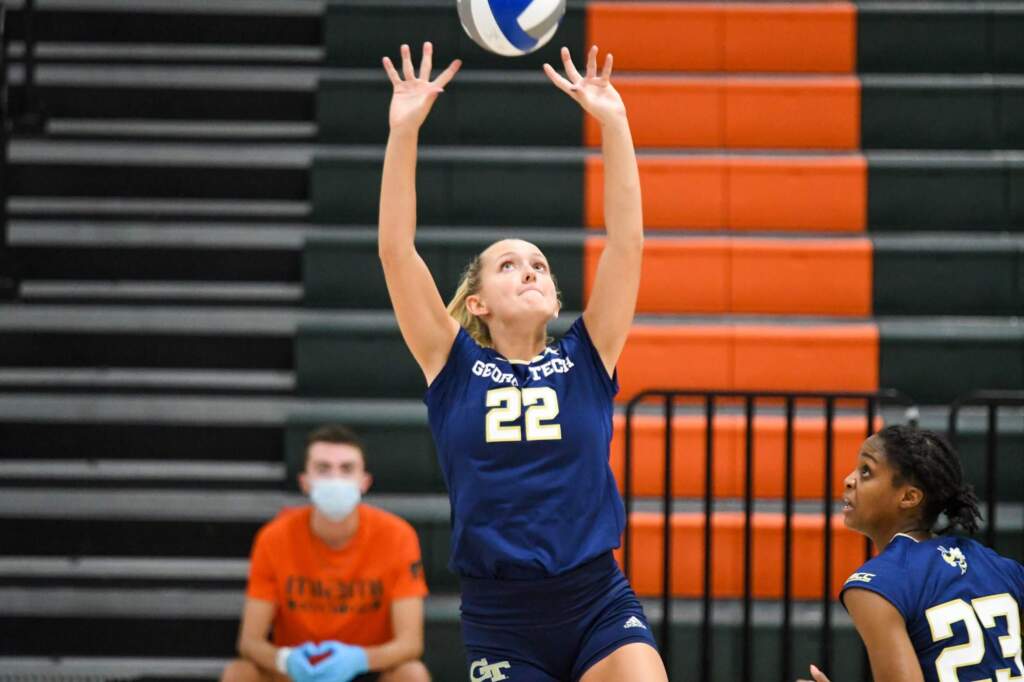 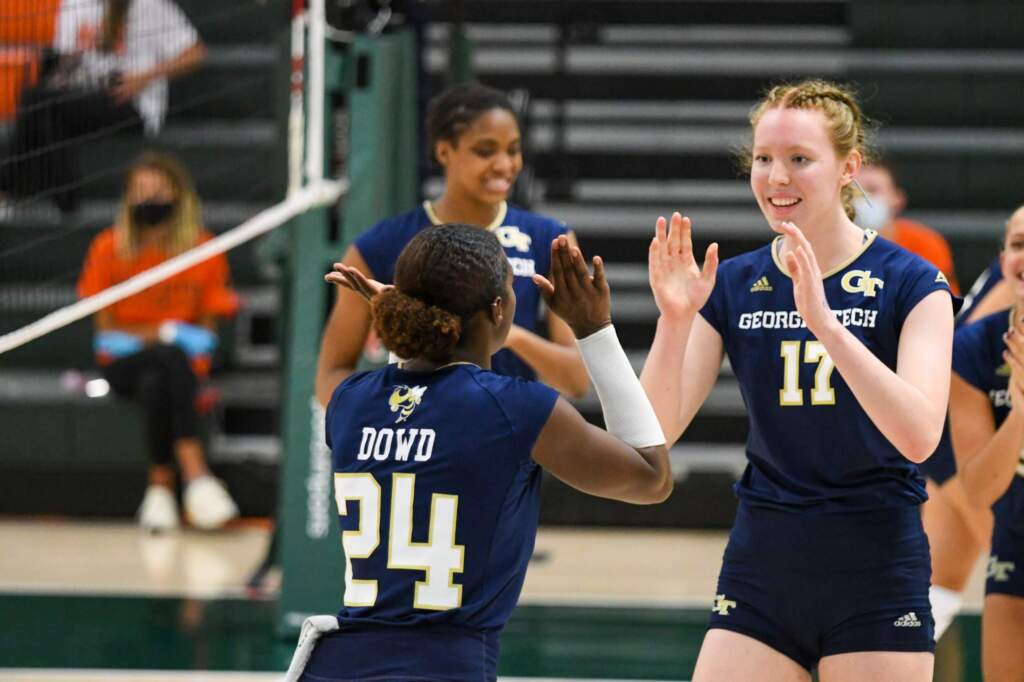 Bergmann started the first set off with a kill to give Tech a 1-0 lead. The score stayed close until Miami was able to string together a few points to go up by three, 10-7. But the Jackets would rally, scoring four straight points to turn a three-point deficit into a 15-14 lead at the media timeout. The teams were tied again at 18-18 before a Miami attack error put the Jackets back in control. But the Canes would put together back-to-back kills from Elizaveta Lukianova and Janice Leao to put them back up 21-19 and forcing the Yellow Jackets to take a timeout. Bergmann, Dowd and Erin Moss had three kills apiece, but the Hurricanes would outscore the Jackets 4-1 the rest of the way to win the first set, 25-20.

A Lukianova attack error gave Tech its first lead of the second set at 3-2. Tech would re-take the lead at 5-4 on a Brambilla kill. Tech hung onto the slim lead through the early part of the second set, leading by as many as three, but Miami would not go away, tying the game again at 11-11 before another kill from Bergmann put the Jackets back in the lead, 12-11. Tech went on another run with Moss putting an exclamation point on it with her fourth kill of the night giving Tech a 17-13 advantage, and extending their lead to 20-15, their largest of the night, as Miami was forced to call timeout. Georgia Tech would run away with it from there, as kills by Dowd and D’Amico helped Tech take the next five points and give them a 23-15 lead. Tech would finish the set on a 7-2 run to win it 25-17 and tie things up.

Tech took that momentum into the third set, jumping out to a 6-2 start. But Miami would creep back in, tying the score at 8-8 on a kill by Lauren Tarnoff, and then the Canes took their first lead of the set at 12-11. Lukianova went on to extend Miami’s lead to 14-11 as Georgia Tech took its first timeout of the set. Tech would not go away, as a Brambilla kill, her 10th of the night, pulled Tech to within one, 18-17. Turnoff led Miami on another run, as they cruised to a 25-20 win in set three.

It was another tight battle to start the fourth set, with neither team pulling ahead by more than two. After falling behind, Tech rallied behind Brambilla and Bergmann, tying things up at 11-11. The Yellow Jackets took advantage of a couple of Hurricane errors, jumping out to a 19-15 advantage late in the set. Miami would eat into the lead, getting back to within one, but big kills from Dowd and Bergmann down the stretch helped Tech pull away, 25-23.

The teams exchanged points to start the fifth set, with Miami running out to a 6-3 lead. But the Jackets would take the next three points sparking a 10-3 run as they jumped ahead 12-9. Bergmann scored the next two points to lead the Jackets, as they pulled away with a 15-11 win in the set to take the match, 3-2.

The Yellow Jackets head into their bye week, and will be back in action Oct. 7 & 8 against Florida State at O’Keefe Gymnasium. Both matches can be seen live exclusively on ACC Network.