Jackets Leap Over Louisville Under the Lights, 46-27

THE FLATS — True freshman quarterback Jeff Sims amassed 313 yards of total offense while throwing for a career-high two touchdowns and rushing for one more, as Georgia Tech came back from two scores down to defeat Louisville, 46-27, under the lights at Bobby Dodd Stadium on Friday night.

After falling behind 21-7 in the second quarter, Georgia Tech outscored Louisville 39-6 the rest of the way, while outgaining the Cardinals by a 262-182 margin in the second half. The Jackets also tightened things up on defense, recovering three Louisville fumbles, the last of which led to the go-ahead touchdown. Six different players scored for the Jackets, led by freshman running back Jahmyr Gibbs, who ran for one touchdown and caught another while finishing with 121 yards from scrimmage.

Georgia Tech struck early in the first quarter after junior defensive back Charlie Thomas forced a fumble that was recovered by junior linebacker Quez Jackson. The Jackets were able to capitalize on the ensuing drive, capped off by a 12-yard touchdown run by Gibbs, to go up 7-0. The Cardinals went on to score the next 21 points before late in the second quarter when Sims flipped the ball to sophomore wideout Ahmarean Brown who found redshirt senior wide receiver Jalen Camp wide open in the end zone to cut the Cardinals’ lead to seven.

Tech carried that momentum into the second half, scoring on its first drive on a 3-yard run by sophomore running back Jamious Griffin. Louisville blocked the extra point to make it 21-20. The Cardinals would re-take the lead though when Malik Cunningham rushed for his second touchdown of the night.

But it would be all Jackets from there, as Georgia Tech outscored the Cardinals 20-0 in the fourth quarter.  After redshirt sophomore defensive lineman Jordan Domineck was able to force and recover a fumble giving the ball back to Tech with 11:36 left in the game, Sims found Gibbs for a 19-yard touchdown to re-take the lead, and sealed the deal on a dime to junior wideout Malachi Carter for 34 yards and a score. Redshirt sophomore running back Dontae Smith put on the finishing touch on a 12-yard touchdown run with under a minute to play as Georgia Tech evened its record at 2-2 in thrilling come-from-behind fashion.

Georgia Tech returns to action on Saturday, Oct. 17 when it hosts Clemson at Bobby Dodd Stadium. Kickoff is set for 12 p.m. for the nationally televised contest on ABC or ACC Network. 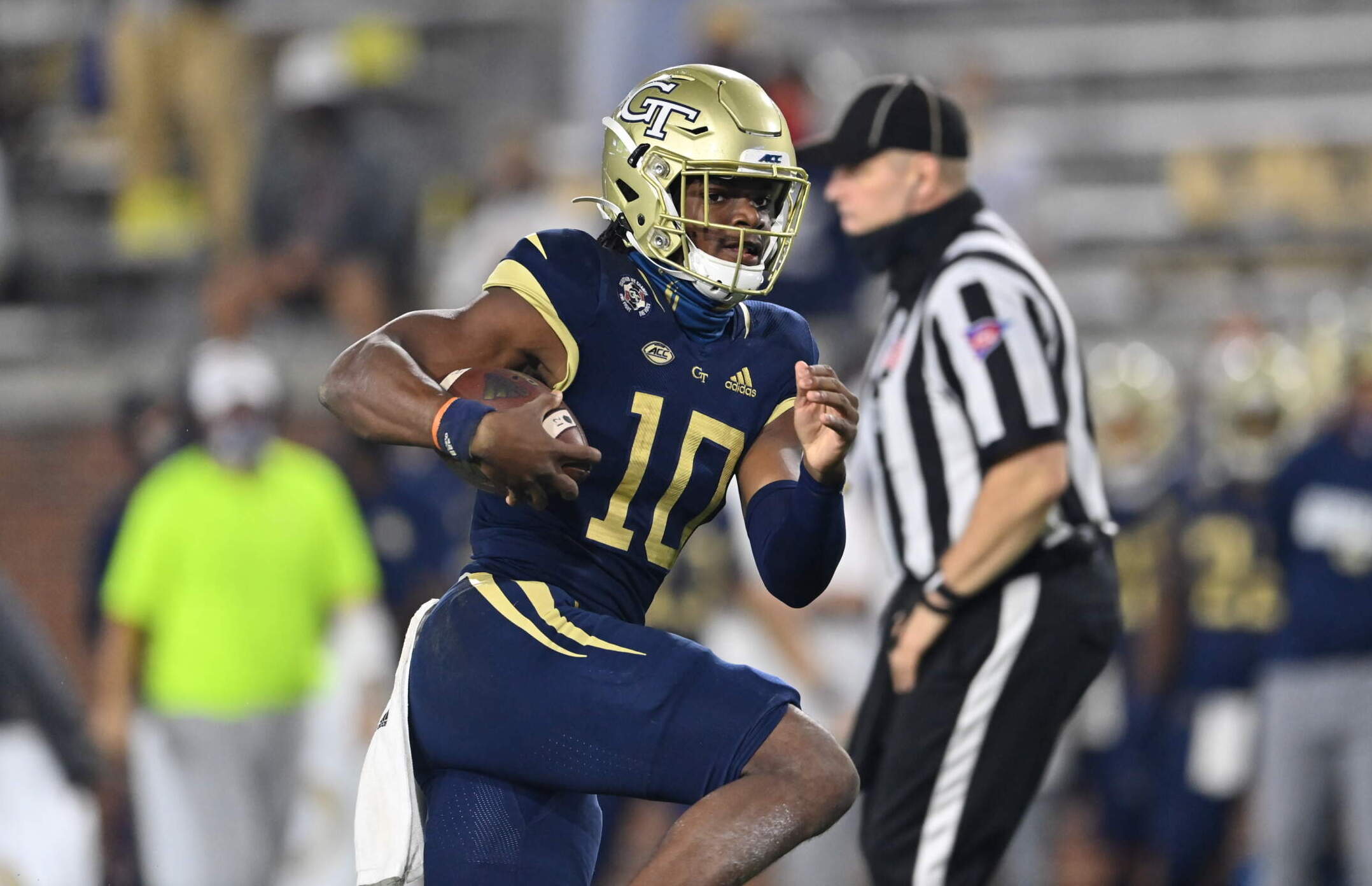 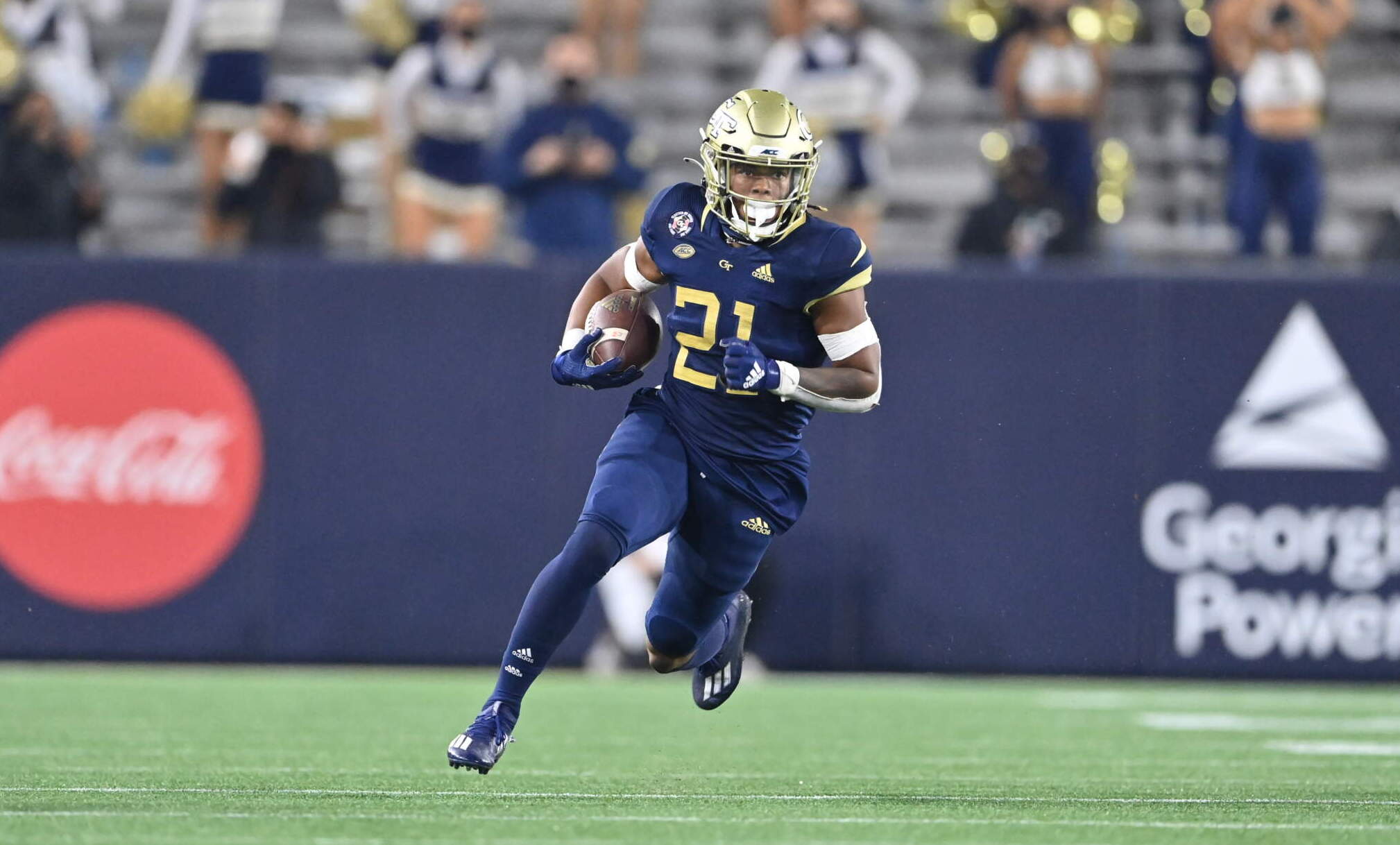 Jahmyr Gibbs ran for a touchdown, caught another and amassed 121 yards from scrimmage in Tech’s victory over Louisville.

Sims stares down the blitz and delivers a DART! 🎯@GeorgiaTechFB back on top!

A leap for the lead the GT lead 🙌 pic.twitter.com/aIX3XmZDPx